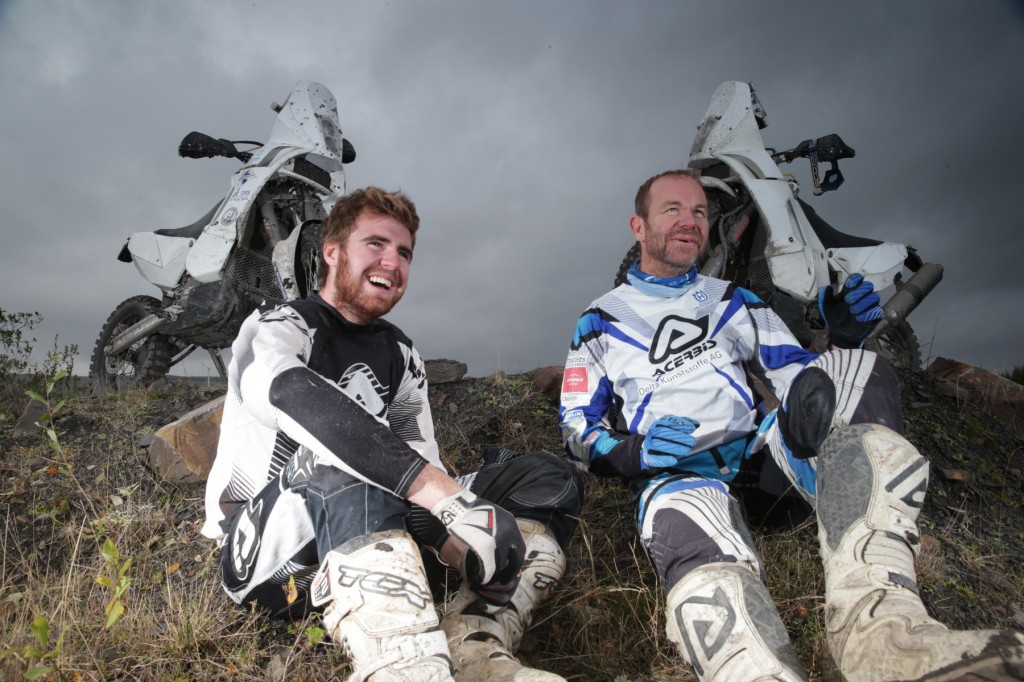 A privateer´s view on the Dakar: Simon and Llewelyn Pavey

The Dakar Rally is one of the most notorious races in the world, and with it always comes some interesting tales. This year privateer Simon Pavey, who is currently racing his 10th Dakar, is also joined for the first time by his 23-year-old son, Llewelyn Pavey who is making his debut in the 9,295km race as part of their SP FiFTYONE Racing Team. The KTM BLOG spoke to Llewelyn right before the start of the race in Buenos Aires about their story. Llewelyn, who is a journalist and media guru by trade, is no stranger to the race as his dad, who formerly lived in Australia but is currently living at the family home in Wales, UK, has raced in a number of Dakar events previously. Llel’s dad has finished seven of the nine he’s entered so far, which is an impressive track record and Llel has been keen to follow in his father’s footsteps.

“My old man first went to the 1998 race and I remember it well. It was a big thing in our family, as it took him months and months to do. I remember going to the start with him, I was only six at the time; we all drove over to France as a family and it was really exciting. You couldn’t move around Paris when the Dakar was there, and actually he almost missed that first start because we didn’t realize it would be so busy – he struggled to get to Parc Ferme to get to his bike in time,” said Llewelyn.

“Every few years he would go to Dakar and as I got a little bit older I started helping him build bikes, mess around in the workshop and all of that kind of stuff. I remember riding his bikes when I was 13 and to be honest I wasn’t interested in going when I was younger. I think it was in 2011 when I helped him with the whole thing my opinion changed; I’d just finished college and I helped with all the photos and press stuff, building his bike and we did some testing in Portugal. It was really cool and I was quite excited by the idea of it.”

Llel’s dad Simon did a little motocross as a teenager before concentrating more on Enduro racing in his native Australia until his early twenties. It was then Simon followed his dream by moving with his partner to the UK to be in Europe and to have more opportunities to race rallies. He’d read a lot about them, and competed in a rally in Australia, so he took the plunge and moved to be able to race in more events. Llewelyn also took an interest in bikes from a young age, and so far it’s been a natural progression, although he’s only competed in two rallies in his career before heading to this year’s Dakar. 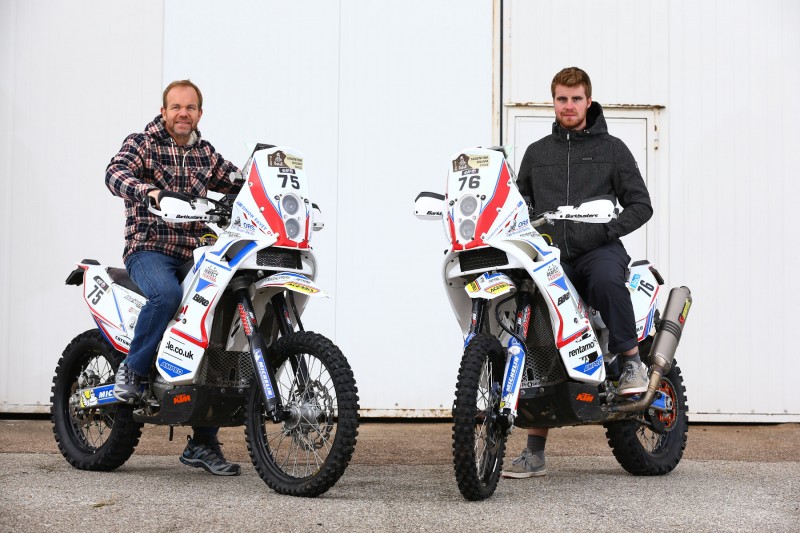 “After 2011 I decided I really wanted to go to Dakar after putting so much into it for my old man. I raced Enduro on and off at British championship level for four years until I couldn’t afford them anymore, and lots of club races, hare and hounds and so on. I didn’t do much motocross, as we rode a lot more by messing around in the forest really. I entered a few Dakar’s, but up until this year my entry was rejected by ASO.”

When asked whose faster, the young gun or the more experienced father, Llel’s response was clear: “I am, without sounding too arrogant. I’d be annoyed if he was faster than me as he’s 47, so I’d definitely be doing something wrong if he was still faster than me!” 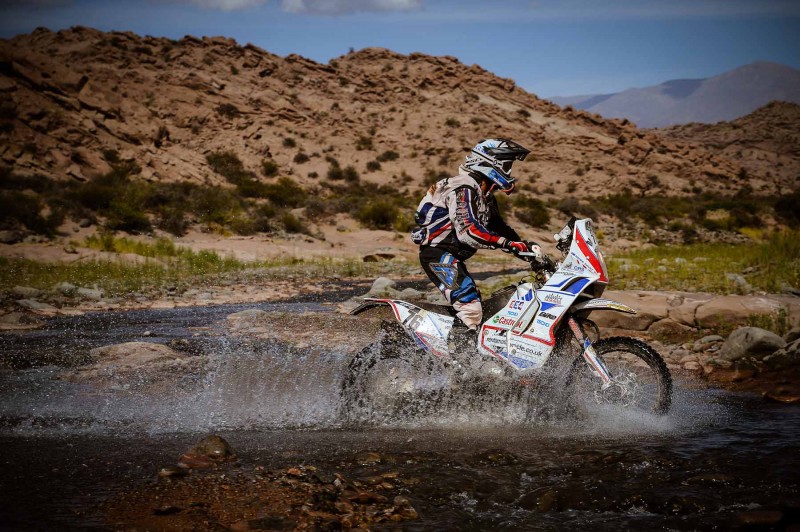 However, as those who follow rally racing at the Dakar it’s a different story, as the race is over such a long distance. Llel explains that there are many things to consider such as the navigation and not making mistakes, along with bike problems that may crop up. Llel explains he’s trying to not look at it as a race, as it’s very dangerous. At the smaller rallies he feels it’s possible to push and the danger levels are a lot less, but at the Dakar it’s about racing smart and learning how to ride it without taking big risks. Llel is not there to prove anything, and has made it clear he wants to be there at the end each day.

But before even thinking about strategy, from a cost point of view just getting to the Dakar can be a massive challenge, without actually taking time out to train and prepare. Privateers have to organize all of their own sponsors, funding, logistics, from the building of the bike to communicating their results – it’s a massive challenge, while factory teams have many, many staff to help organize all of these details. Llewelyn explains how they’ve overcome the financial demands that Dakar brings. 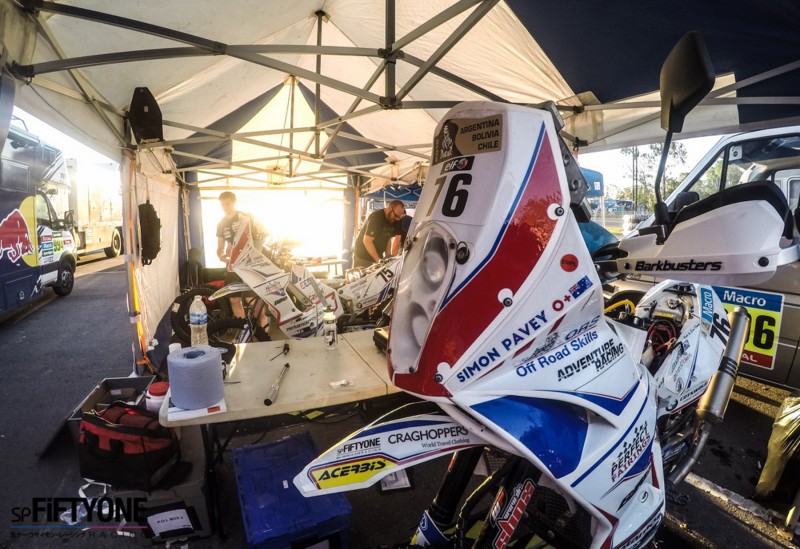 “On the cost side it’s obviously a really big hurdle for any privateer team, especially in the UK, because nobody really knows what Dakar is outside of motorsports, and there’s not a lot of money in the sport itself. To get money is really difficult, and I don’t know why but this year proved to be tougher than in the past. We’ve got some good sponsors that have helped my dad out for a really long time Castrol, Michelin, Acerbis, Adventure Racing, Craghoppers, and Cotswold, as they’ve stuck by him for the last four or five Dakar races. They’ve helped us out again this year and my old man’s company had to put some money in to help as well. Another company called rentamotorcycle.co.uk has helped us out in a really big way too. That’s the biggest problem with Dakar, it’s easy to get help with parts and product, but you actually need a lot of cash to go there. The entry fees, flights, shipping are all expensive. We also ran a kickstarter campaign with Indiegogo and we’ve done really well out of that with around £10,000 of funding.”

On the physical side it’s also been difficult as Llel and his dad also needed to continue working, and fit in some training every day together. “I think training the little we did showed us how long it takes to get as fit as Coma and those guys. Just doing a little bit every day means you lose half the day, even if you just are going for a cycle and to the gym for an hour! It’s been fun, a lot better than sitting in an office, but obviously we have to work too.”

In his journalistic role Llewelyn had the opportunity to ride Marc Coma’s factory KTM 450 RALLY last year, and can draw comparisons to his KTM rally replica customer bike (which is a 2013 model). “The factory bike was at the extreme end of the scale. Everything on it was built around going 110%, and when we got our bikes, which are carbureted and have done a Dakar already, I was pleasantly surprised. It’s not as finished as the newer one, it’s a bit fatter and not as refined, but it’s awesome to ride. It’s easy to ride, whereas the factory bike needed riding hard to make the most of it, and if I had to do that it would be impossible, as I’m not fit enough or a good enough rider. We’ve got the stock suspension, which is a little softer and forgiving and everything is pretty much stock. It’s a really good bike for us.” 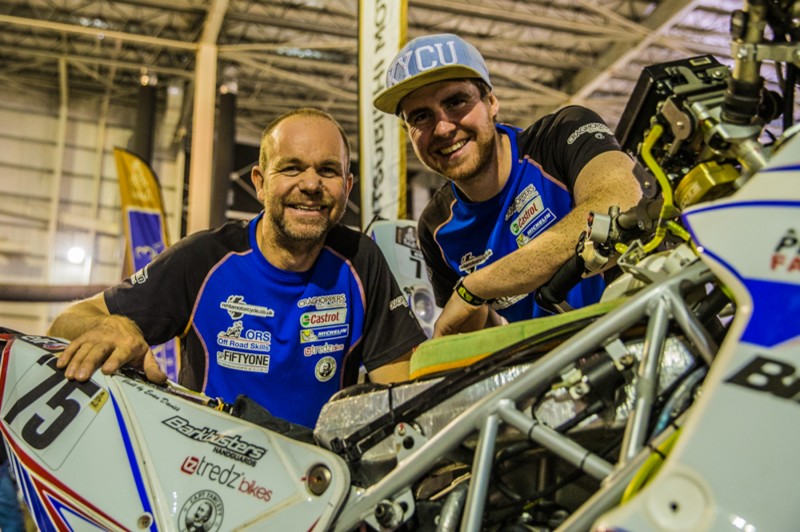 For the race this year Simon and Llewelyn have a sprinter, easy-up, a mechanic for each rider and a separate tent with campbeds and mosquito nets to rest in with a team set-up. Although the ideal scenario would of course to be have a motorhome like the pro riders. It’s a tough event but there is some serious determination (and competition) between the Pavey duo.

“I also want to say that Shaun Sisteron from KTM UK has helped us a lot this year, which is unbelievably good of him really, considering KTM’s involvement in the Dakar already. One of the beauties of riding for KTM is you can sign-up for the KTM service at the race. It costs money, but there’s a package with the service truck you can buy into before the race, which is around EUR 2,000 to have access to it, and they carry absolutely everything you might need. Yes you have to buy the parts, but it does mean you don’t have to worry about carrying lots of duplicates of parts. They have mechanics that can help with fixing things if there’s a problem, and this is a big help, as being a privateer like us we can’t always carry everything we might need. It’s a good reassurance to have and KTM UK have supported us, so we must say a big thanks to them.”

Llel and Simon are currently lying in 69th and 71st position overall after five stages of the race. To follow their progress visit Dakar.com and their racing numbers are 75 and 76 respectively. The Dakar concludes on January 17th in Buenos Aires after travelling through Argentina, Bolivia and Chile. 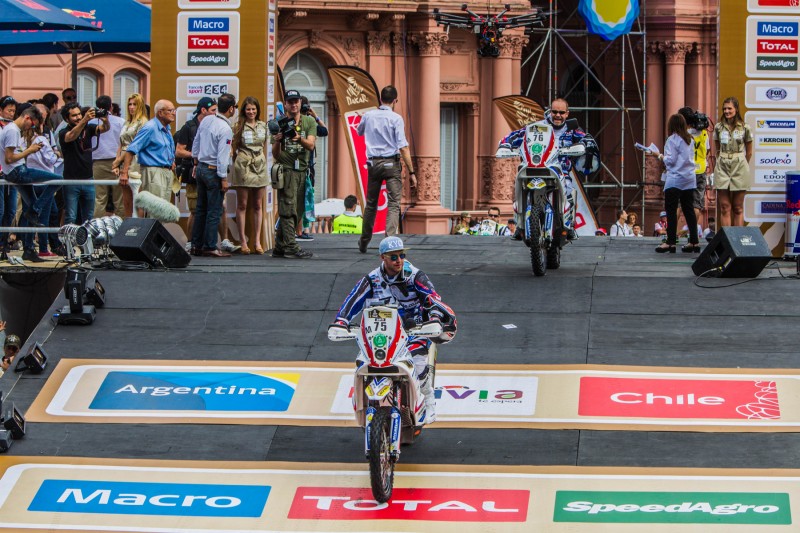 79 Responses to A privateer´s view on the Dakar: Simon and Llewelyn Pavey