From coming close to hanging up his boots at the end of 2014 due to injury to winning the 2015 Enduro 2 World Championship and giving KTM a first 350 EXC-F powered EWC title, the past twelve months have certainly been memorable for Antoine Meo.

With an amazing fifth EWC title safely secured, and now firmly focused on a career in Rally racing, KTM sat down with Monsieur Meo to find out more about his rollercoaster year. 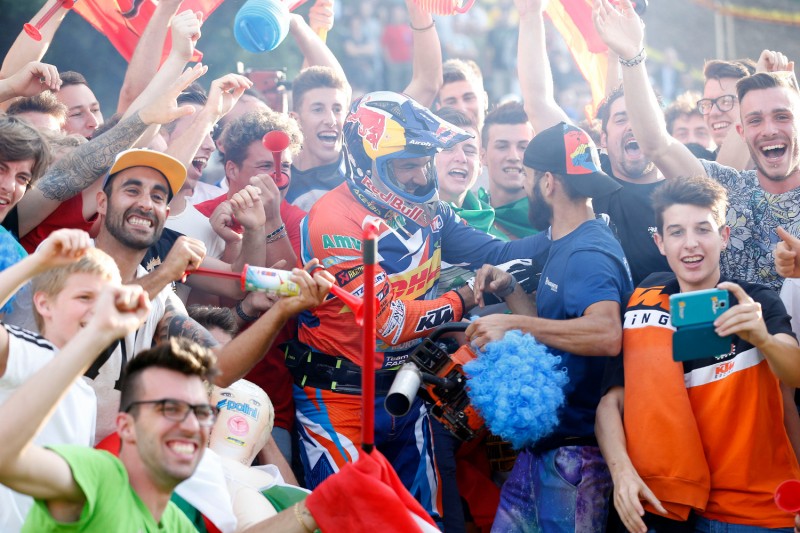 Antoine, congratulations on winning the 2015 Enduro 2 World Championship. That’s some come back from injury!
“It was a really important year for me and I’m glad it ended with me winning the Enduro 2 World Championship. Spending the second half of 2014 recovering from injury I had to really dig deep and work probably harder than ever to return to the top. Not many people know it but at the end of last season there were thoughts crossing my mind to even quit racing and end my career there. The injury to my hand was pretty serious and almost career-ending.”

You started the 2015 EWC season with four wins in four races. How did you manage to come back so strong after the injury?
“It was a long process of rehabilitation and then returning to training. It was tough physically and mentally. I remember when I first sat back on my KTM five months after the injury. For three weeks I couldn’t even touch the handlebar with my injured hand. So I thought ok maybe now it’s time to put an end to my career. But I didn’t give up trying. I was hard on myself and my body, to try to push the limits and come back on a bike. The process was really slow but after a few weeks I could see some improvement and I could partially use my hand again. It was very hard and difficult to come back to the desired level but in the end everything worked out fine and I got a huge amount of satisfaction from winning the first rounds of the championship. I just can’t thank enough all the people in KTM who cared about me and gave me the confidence needed to keep on trying.”

How does it feel to give 350 EXC-F its first world title in Enduro?
“It’s good for everyone in the team and of course for KTM. For me it’s like giving back to them for all the hard work they’ve done over the past few years. I think the bike didn’t yet have the results everybody in KTM expected and now it was the right time to make that right. I got close to giving the 350 EXC-F its first Enduro title last year but I crashed and ended my season early. I think winning the Enduro 2 title on this bike gives all of us a great amount of satisfaction.”

In your opinion, what are the advantages of the 350 EXC-F?
“For me the 350 EXC-F is the ideal bike for Enduro riding. It’s strong enough and also has a very light handling, like the 250 EXC-F. It’s such an easy and enjoyable bike to ride. For sure if you start pushing it to the limits you need to be careful because the bike has got so much power and a light feeling. But it’s a great package. I think it suits my riding style and I really like the bike.” 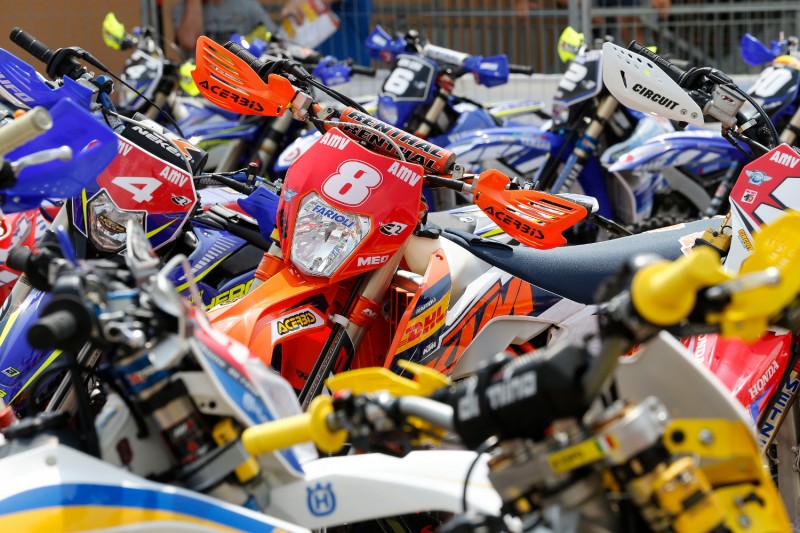 What are the highlights of your Enduro career with KTM?
“I’ve had some great moments with the KTM Farioli Team during the past few years. Apart from winning three world titles with them for me the highlight were the amazing moments we spent together. To be honest when I got the decision to leave my previous team I was a little bit scared. But when I arrived to KTM I tried to retain my spirit and create a good atmosphere around me. It’s really important for me to feel comfortable with the people around me. After all these years with Fabio and the team I was really looking forward to coming to the Enduro GPs and meet my team again. I enjoyed seeing everybody and everybody enjoyed seeing me. It’s like my second family here in KTM Farioli. I’ll miss my friends here now that I move on to the Rally team. Fabio is now more than a team manager for me, he’s like my friend. We stay in touch and chat even when we’re on holidays and that’s really important for me. The worst part for me now is the fact that I have to leave my friends in the Farioli team.”

You’ve decided to turn to a new page in your career. What are your plans and goals?
“After five world titles and an amazing career in the Enduro World Championship it’s time for me to search for new challenges. I’ve accomplished more than I ever dreamt of in Enduro racing so it was the right time for me to make a few changes. From this moment on my main priority and focus will be Rally racing and the Dakar. We’ve found a pretty solid solution with KTM, which allows me to focus on my Rally training and racing while I can also do some selected Enduro events. We don’t have a fixed plan for 2016 yet but it’ll all depend on how things go with my Rally obligations. I’d really love to come back and race some Enduro GPs or even some races I particularly enjoy in France. But right at this moment the focus is rallying. I think it’s important for me to stay as close as possible to Enduro racing as it’s my passion.” How are you adjusting to your new KTM 450 RALLY bike?
“The first word coming to my mind every time I think about my KTM 450 RALLY is confidence. For sure when I saw the bike for the first time in my life I said to myself ‘Come on, what are you going to do with this bike?’ When you first look at the bike it looks very big and heavy. Then after just a few meters in its saddle straight away I started feeling good. You can’t believe how easy it is to ride. You might have some extra inertia with the bike rolling but it’s incredibly easy to handle.”

How is your Rally training and preparations going?
“I started training with the Rally bike last summer. Obviously the greatest challenge for me was the road book. I was pretty scared to be honest in the beginning but once I got to know the basic rules I started liking the whole idea of having to find your own way. It’s like treasure hunting I’d say. My first Rally event was the Atacama Rally in Chile. It was just a preparatory event for me as I didn’t have much time to train before that. The first feeling with Rally racing wasn’t bad. I made a mistake during the race that reduced any chances of a good result but overall it wasn’t bad at all. I had many hours on the bike, learned a lot and got my first proper racing experience from the Rallies. For me Rally racing is like a new job, a new step in my career. You need to start from the beginning and learn a lot of new things.” 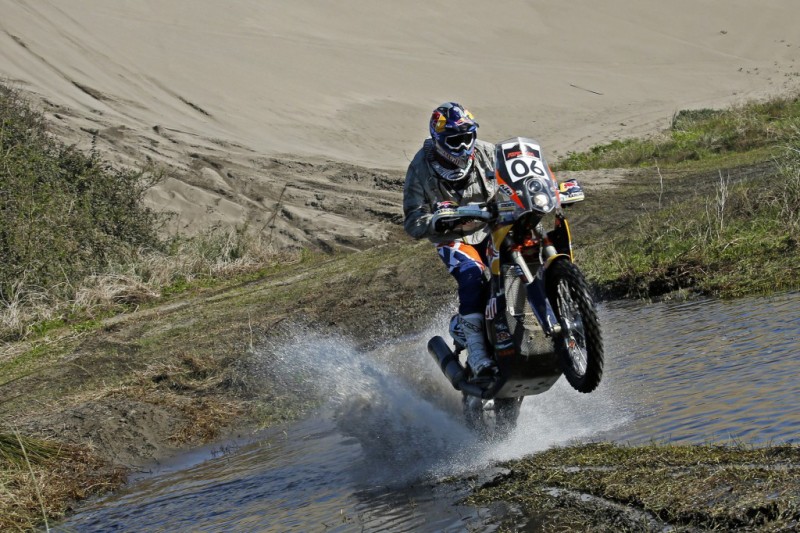 What do you think is still missing to be able to fight the top guys? Is it speed, experience or the ability to read the road book?
“It’s everything! The second day of Atacama Rally was a really fast one. I remember when I got back to the hotel after finishing the day I was really down psychologically. I thought I could never ride as fast as the top guys. There were some really fast sections during the day where I was scared and didn’t feel comfortable. Then as the race went on I started getting more and more used to riding at these speeds. In the end I was enjoying the speed and I couldn’t say my speed was that far off from the top guys. Then of course it all goes does to navigation. It’s such a hard mental process that you have to go through. You need to change your whole attitude, train your vision and your reflexes. I need to gain more experience the fastest I can. We have a pretty solid racing, testing and training schedule leading up to the big race – Dakar 2016.”