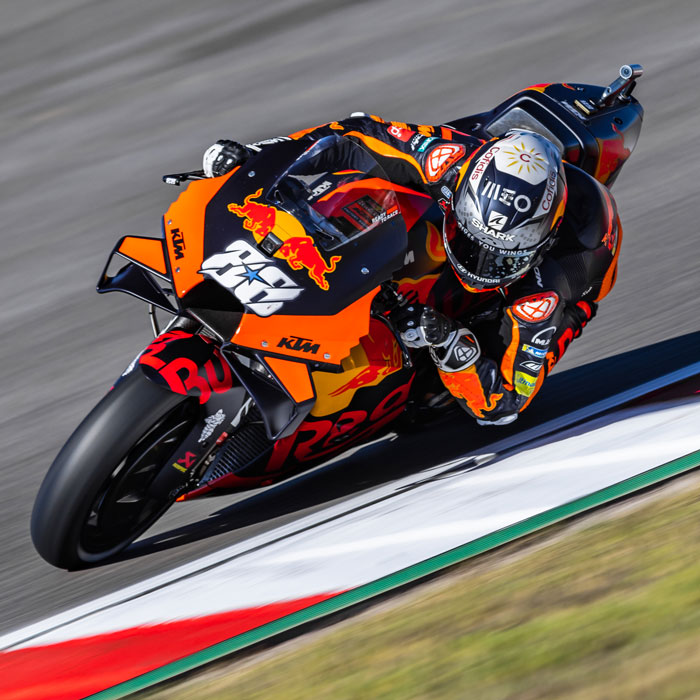 The heat, smell and sound of a KTM RC16 will come a little nearer to a selection of motorcyclists on the edge of the 2022 Grand Prix of Portugal. Why and how? Red Bull KTM Factory Racing’s Miguel Oliveira tells us…

MotoGP™ and bike racing fans that will be riding to the Grande Premio Tissot de Portugal on April 23-24 need to get to Portimao slightly earlier. Wednesday 20th to be precise. The reason? Something pretty special. At 16.30 local time Red Bull KTM Factory Racing’s Miguel Oliveira will appear on a presentation stage in the centre of the town, along with Portimao Major Isilda Gomes and the Algarve International Circuit CEO Paulo Pinheiro. After the Grand Prix winner has talked about a promotion scheme for the fifth round of MotoGP, his charity initiative and hung out with the #88 followers he will change into his leathers and have his race-spec KTM RC16 fired-up.

The howling motorcycle – that has already conquered the Indonesian Grand Prix this year and owned the first MotoGP race at Portimao in 2020 – will then lead all the bikers in convoy to the gates of the circuit. The 27-year-old will guide the RC16 away from the road and to more natural climes by heading through the pitlane and onto the spectacular Portuguese asphalt…with all of the bikes in tow!

“It’s cool because for the first time the fans have the chance to ride with me and that’s the most appealing factor of the event; that they can do a lap with me!” Miguel said when asked about it directly after the last MotoGP event in Austin, USA. “If I was a fan then I’d love to have the opportunity to be close to a MotoGP bike. I think it will be a very cool event.”

Last year Oliveira was ‘escorted’ by scores of fans as he travelled from his hometown to the Algarve International Circuit for the 2021 edition of the GP. Thanks to Portimao and the circuit organisers he is now able to get even more interactive in the run from the centre to the MotoGP venue. While Miguel has more than a handle on the RC16 on the racetrack, steering a bike that costs millions of Euros on public roads is another prospect. “It’s impossible!” he laughs when asked to consider his MotoGP steed as a street machine. “The level of grip [won’t be there], it has a first gear that is so long and you don’t have ventilators so the engine temperature will go through the roof! We just want to bring the fans closer to me and to give them a feeling of the kind of support I get when I come to Portimao.”

Once at the Algarve International Circuit Oliveira will then have to keep control of the slow presentation lap. “We’ll make sure it’s all safe,” he smiles. “We did more than 200km last year with almost 100 bikes on the road and the organisation of that was amazing. This time we’ll have the same commitment.”

Even though the event will shine a light on just the fourth MotoGP event to take place in Portimao, the ‘ride-out’ is also a chance for Oliveira to acknowledge some of the most dedicated and feverish MotoGP public in the world. “Many years ago they said it was impossible for a Portuguese to be in MotoGP. It happened. They said it will be impossible to win with a KTM. It happened, and several times,” he says. “I guess we are just breaking barriers! I enjoy events like these because you don’t know how long you will be around for similar things. The MotoGP paddock is so diverse and the environment is amazing. It is competitive, yes, but to have such passionate fans and to be able to bring them closer is something special.”

Where: Zona Ribeirinha, Portimao followed by a lap of the Algarve International Circuit

How: Bring your wheels, don’t be late!

14 Responses to ‘CATCHING’ MIGUEL: RIDE WITH A MOTOGP™ STAR