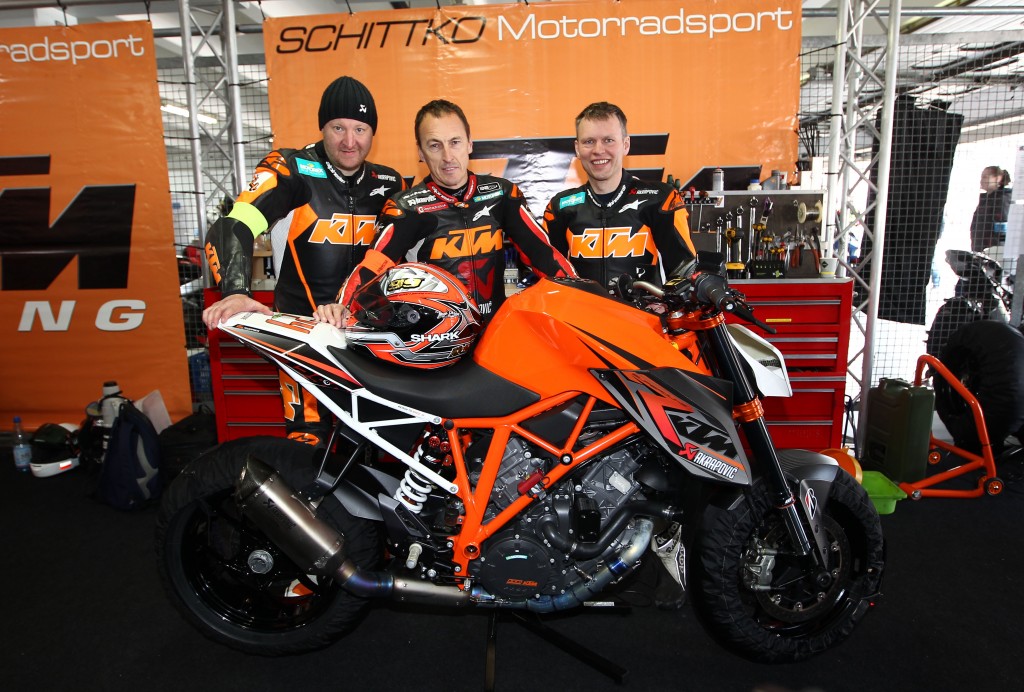 Two 1290 SUPER DUKE R – a former MotoGP star – a rocket – a press officer – and 1000 km race distance in Hockenheim. In short, in a 7 hour battle the “KTM Beast Boys” competed against 70 full-faired sportsbikes. 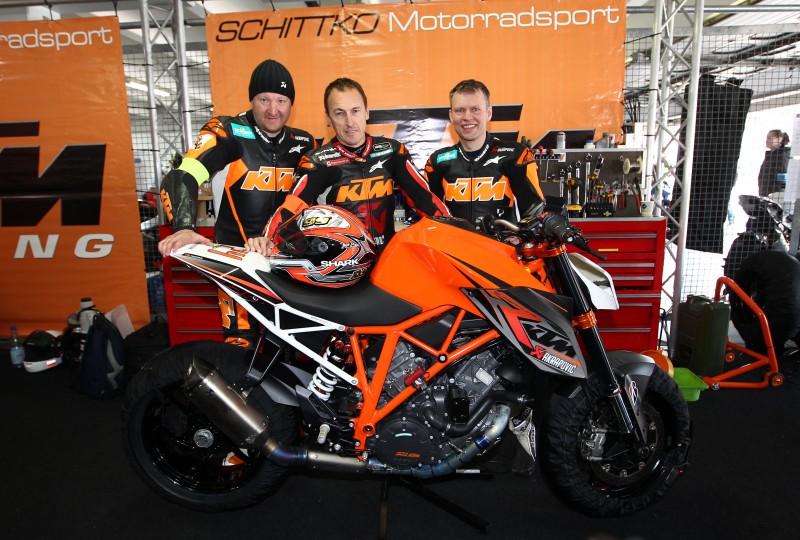 The idea was quickly raised: A couple of months ago, during the launch of the 1290 SUPER DUKE R in Spain THE new Naked Bike delighted not only the international pressmen. Even I was on fire for this bike. Especially the SUPER DUKE Rs fitted with PowerParts displayed the fireworks on the Ascari race track in terms of acceleration, deceleration and traction accompanied by superb Akrapovic sound. A fun race appearance with exactly these bikes had no longer to be discussed. Even Jeremy McWilliams, who was involved in the press test and in the development process of the SUPER DUKE R, immediately second the idea.

Quickly the choice for a 1290 SUPER DUKE R race appearance fell onto the traditional kick off event of the German-speaking street race scene: 1000 km of Hockenheim. For more than 30 years, a motley bunch of race maniacs, from pure amateurs to just for fun racers to pro racers, meet at the track every year on the Saturday of the Easter Weekend. Not only the riders are diverse, the same applies for their bikes: Standard bikes starting from 600cc meet 1000/1200cc Superbikes perfectly equipped in every detail. Naturally all with full-fairing, because  nobody can usually be that dorky to ride a distance of 1000 km on a fast track like Hockenheim on a Naked Bike.

At 1000 km race events, each team is allowed to use several bikes, what definitely eases the situation at the pit stops. Entering pits, change the timing transponder and the next rider hits the road. But as usual, especially at such an alleviated endurance race, it is essential to have an experienced team of technicians and tacticians around you. We, the “KTM Beast Boys”, could luckily rely on the community of the SUPER DUKE Battle series held in Germany around organizer, KTM dealer and racing junkie Konrad Schittko. 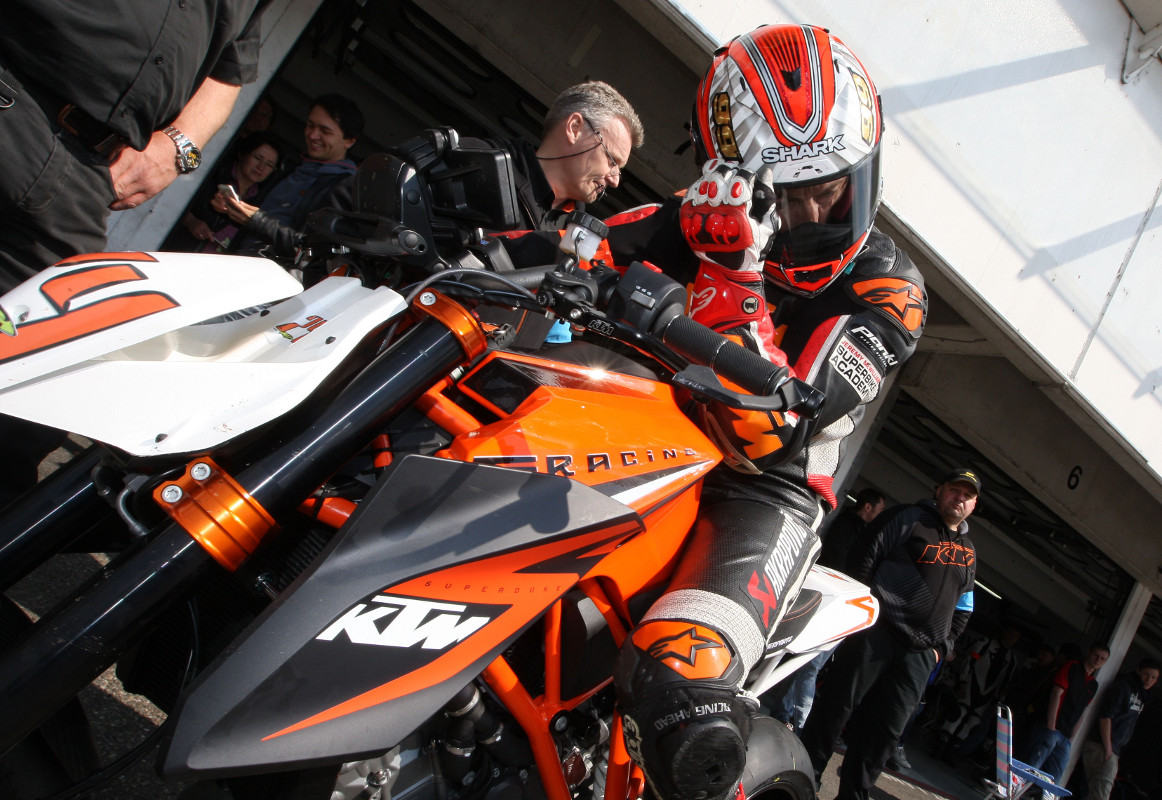 Unfortunately, Schittko recently had to withdraw, due to health, but the Battle family on-site smartly switched to emergency mode and without flinching ensured the best service and supply that was possible under these circumstances. Thanks for that, guys! And above all: We wish Konrad alias “Wuschel” a speedy recovery and all the best!

We quickly found the proper team for the SUPER DUKE adventure. Since it had been my idea to challenge all the sportsbike riders that crouch behind the shield, I could not get out of this affair. Jeremy McWilliams agreed to be part of the team especially since his racing career, his technical input and his merciless rev up motivation (even with 50 years!) was an exclusive benefit for our project. We simply assumed that 80 percent of the competitors would have to accept the idea of competing against a former Irish MotoGP racer on a 190 hp Austrian Naked Bike first.

The third “KTM Beast Boy”, is no stranger in the scene either. When it comes to fast and reliable racing with a (Schittko) KTM in endurance sport “Rocket” (in everyday engineer´s life called Oliver Schmidt) from Wuppertal is always in charge on the handlebars. 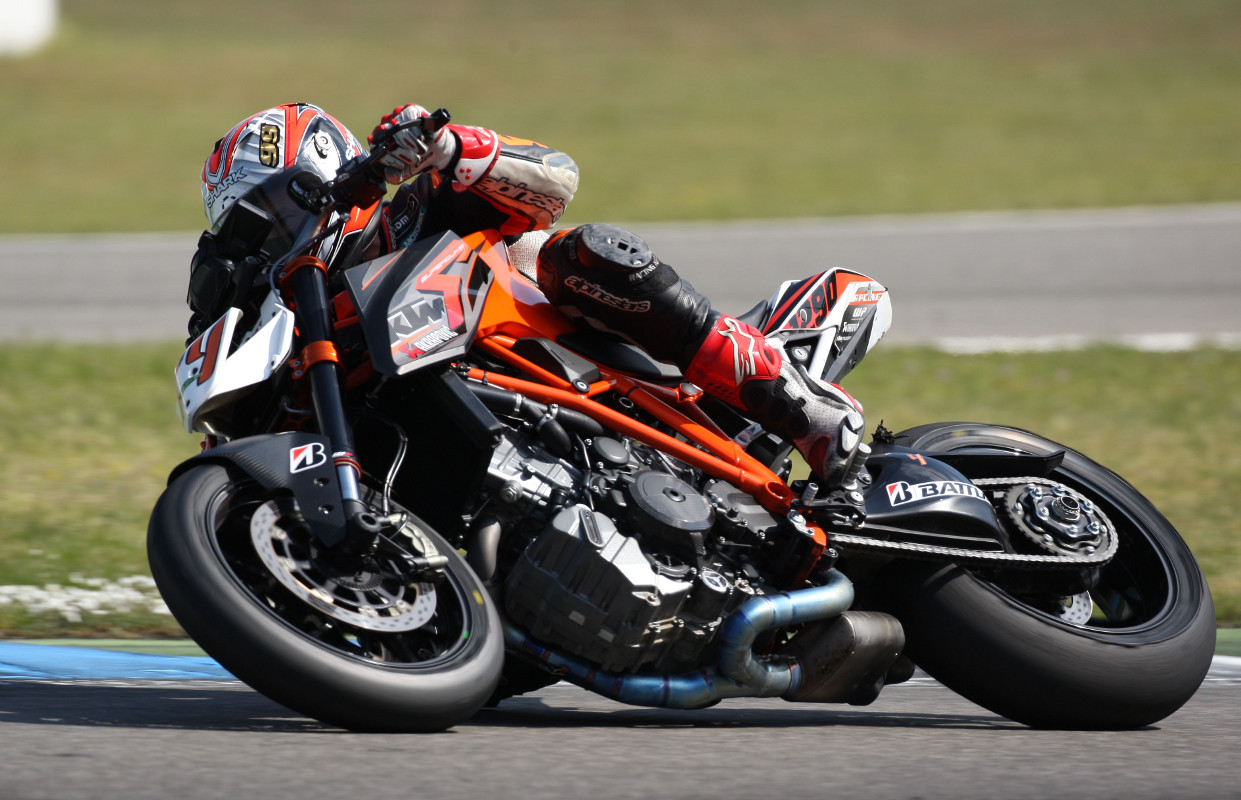 The preparation of the two 1290s for its appearance at Hockenheim proceeded without any problems. Some decibel had to be purged by the DB-Eater then it were just some hand grips to save screws and stick the numbers – and basically, thanks to the KTM PowerParts the 190 hp and 155Nm bikes were ready to race. Due to some additional parts provided by specialist Markus Krämer the weight of the endurance SUPER DUKE R could be reduced by 5 kg to less than 200 kg including fuel.

At the technical control the bike was easily accepted. Only the missing plastic stoppers on the footpegs were faulted by the technical scrutineer. Smart as we are the solution was simple: Oli “Rocket” bought four bottles of champagne at a petrol station in Hockenheim and served it to the ladies on-site. Schittko technician Oli carved perfectly fitting stoppers from the champagne corks. With those and the state-of-the-art Bridgestone slicks we go off to the 1000 km battle.

For the qualifying session we definitely pinned our hopes on Jeremy. With good reason, because already in his third lap – one has to mention that McWilliams is familiar with the track, but has never been ridden the Formula 1 route – the monitor indicated a 1:48min lap time. Later on, still under cool weather conditions “Jezza” reduced the time by another second and rode directly in the slipstream of the fastest riders headed by Jörg Teuchert on a Bavarian RR. At the end we qualified as eighth and the other 71 teams realized that one can be fast with good neck muscles and less plastic. 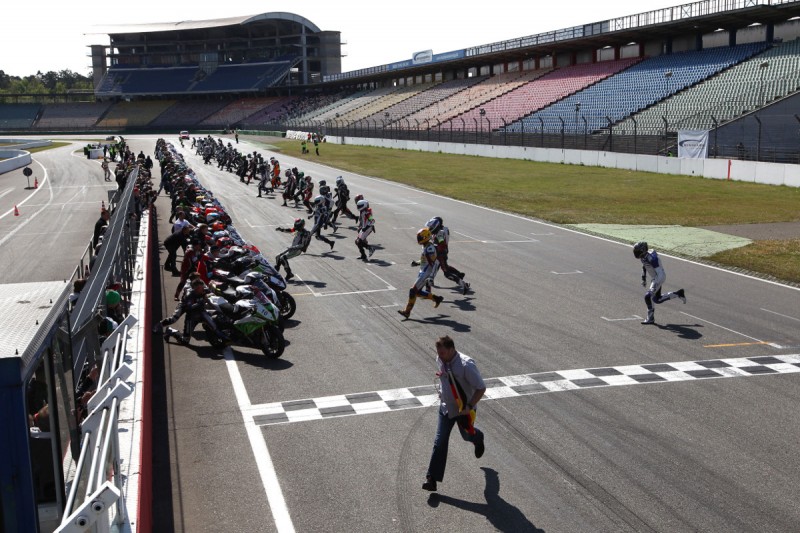 11:45am – start of the race in traditional Le Mans style. In order to continue the bully-boy tactics, we opted for Jeremy as the first rider. After a short sprint the fastest of the “KTM Beast Boys” darted off with a lifted front wheel and entered the first corner in third position.

But there is the long Parabolica at Hockenheim that can be ridden at full speed. There is no sense in glossing over it: Even the strongest of all Naked Bikes does not have a chance against top riders on a 200hp Superbike. After some laps Jeremy levelled off at seventh. After 45 minutes and a first pit stop the orange racer with the number 24 was back in front at fourth position. With lots of torque the 1290 obviously dealt more economically with the fuel than the screaming four stroke bikes and pulled off some more laps with 18 litres. 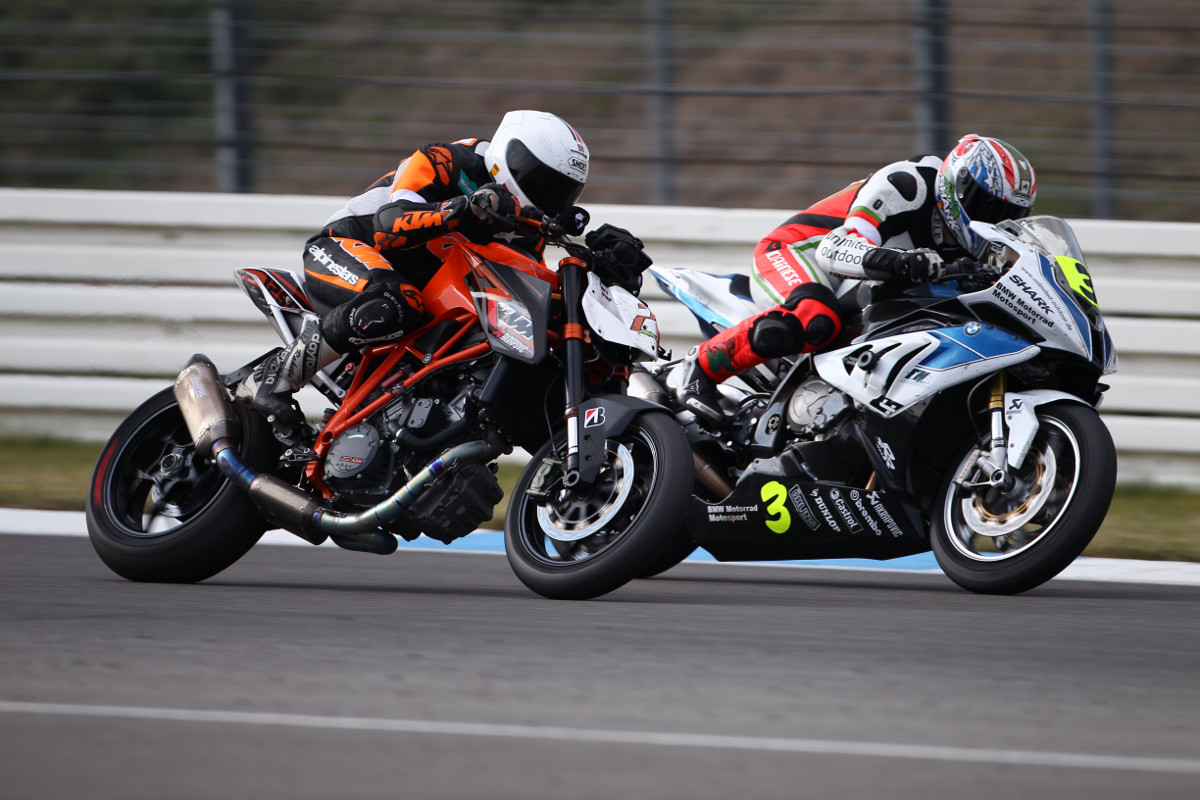 “Rocket” lived up to his name and defended the good position. For a short time, the timing monitor indicated P3. After 1,5 hours and with a new medium rear tyre I started into the race for the first time. My motto: no mistakes, no scrap, just put your head down . My plan worked out. With lap times of 1:52 min I lost some ground, but with a steady way of riding I kept the deficit within a limit. To rebel with the SUPER DUKE R against the current Superbikes and top riders was really fun, but caused tensed shoulders and a stiff neck. In the slipstream of a Superbike the KTM SUPER DUKE R and the bulky pressman still reach 286 km/h; according to the speedometer Jeremy reached 298 km/h. That sounds like fun and it definitely is, but after 20 laps at full speed the battle started to hurt. 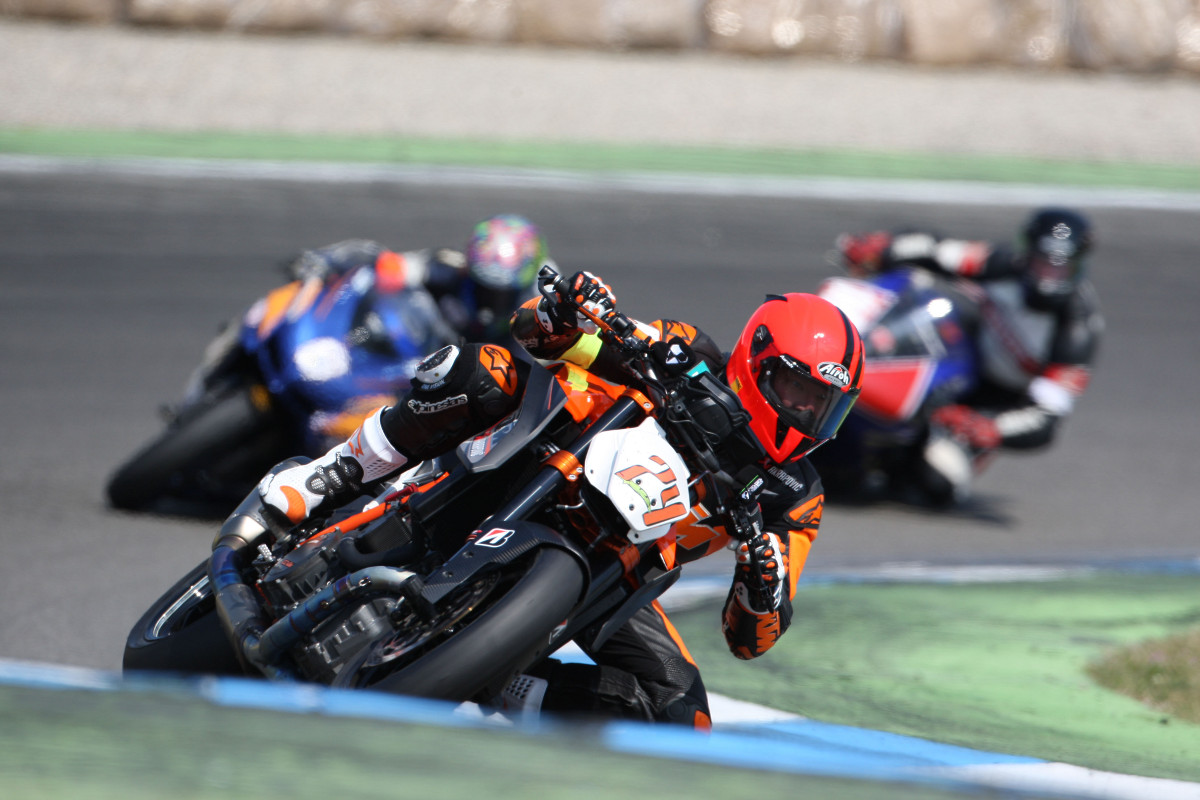 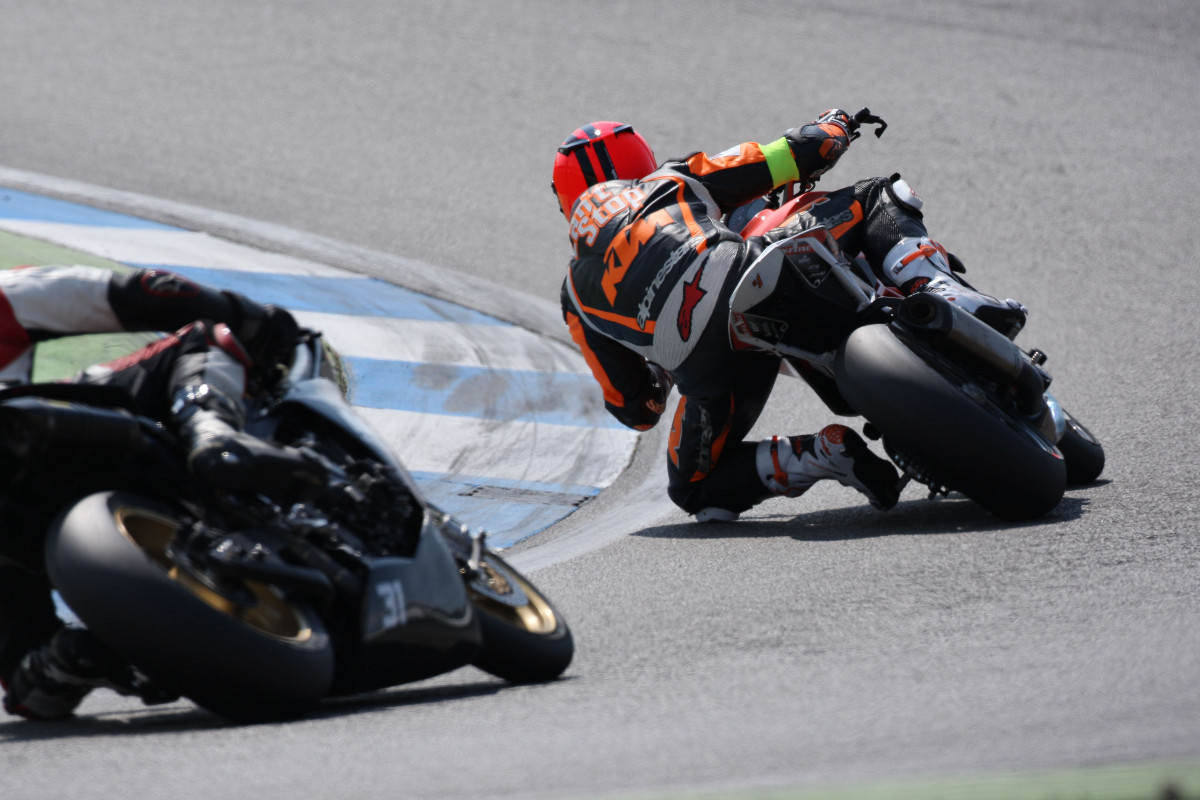 However, in other sections the potential of the 1290 SUPER DUKE R is just awesome. At the entrance of the Motodrom one could really take advantage of the SUPER DUKE´s torque and transmission and it was a real treat to accelerate past the 1000cc Superbikes one after another at the sprint to the Sachskurve. Broooaaah. Done and dusted. Later on, “Rocket” told us that right in this corner (in front of the crowded tribunes) he once thwarted Michael Galinski. Today´s Yamaha crew chief (and former Superbike champion) rode the pimped YZF-M1, which Matej Smrz rode at the Superbike championship race at the Nürburgring last year.

The first third of the race went well, but as it often is the case in racing something unexpected happened. In fifth position our number one rider crashed into the gravel at the entry of the Motodrom. Fortunately, except a thick dust cloud nothing serious happened. Blessing in disguise – Jeremy bobbed up again and brought the R back to the pits. He just arrived in the pits when “Rocket” already left the pits on the second bike. However, the biggest loss of time was yet to come, because within the next 45 minutes the team didn´t succeed in repairing the crashed bike. The next pit stop didn´t last longer than others but it felt like hours until the bike was fuelled again. Because of the good performance of the tyres we could at least save the time of a tyre change. 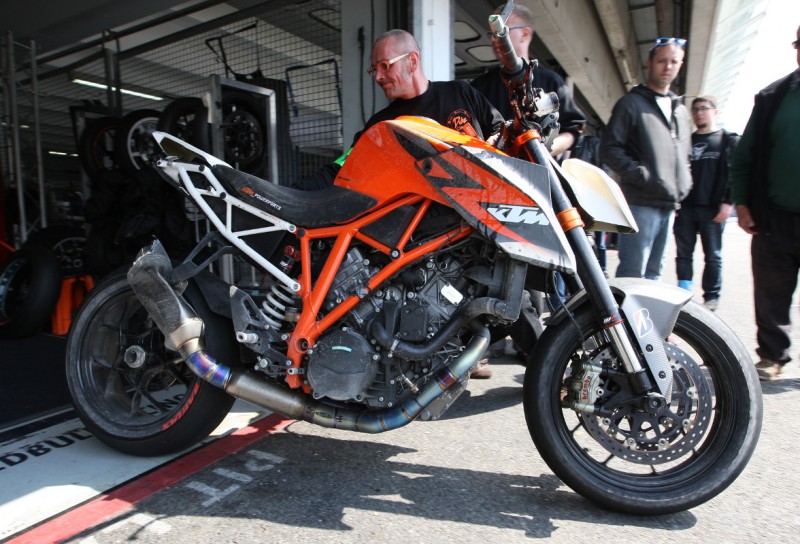 Oliver Kurpjuhn, who is the smart tactician in the pits, decided for an uncommon plan to avoid further deficits. We had to save as much time as possible during the next bike changes, therefore we quickly set up the blue Schittko KTM RC8 that was dozing in the corner of the box. As if we had foreseen it: Just to be on the safe side the RC8 had also passed through the acceptance test. Since we only had to change the transponder what takes less time, I rode the RC8 just for some laps to gave the team enough time to rebuild Jeremy´s SUPER DUKE R for the final dash. 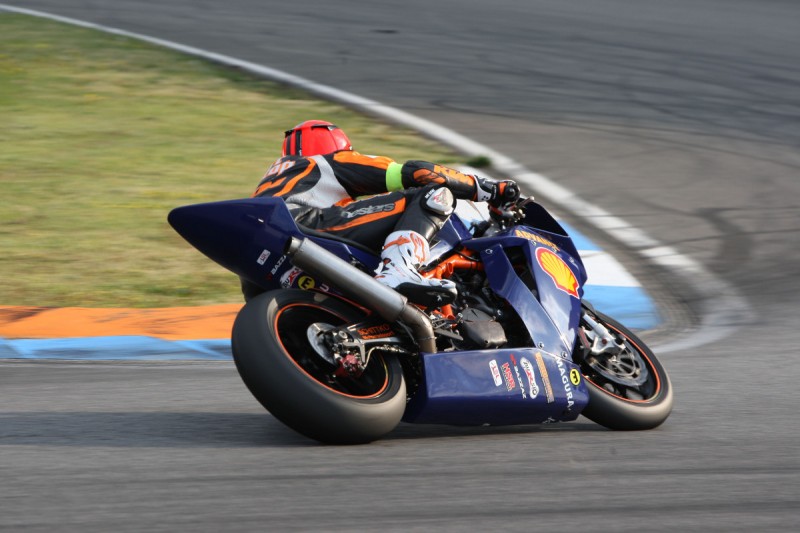 Only ten minutes later, I returned to the pits to hand over the transponder to McWilliams. He digged up the hatchet and reved up as if we would still be fighting for the victory. After more than 900 km race distance McWilliams was still riding 1:48 min lap times and the “Beast Boys” made up some of the lost ground. The Irishman gained more than 5 seconds per lap on the riders in front. With eight laps to go he advanced to ninth position and three laps later he was already eighth. Indescribable joy on the pit wall. As it´s right and proper, the SUPER DUKE R crossed the finish line just on the back wheel. 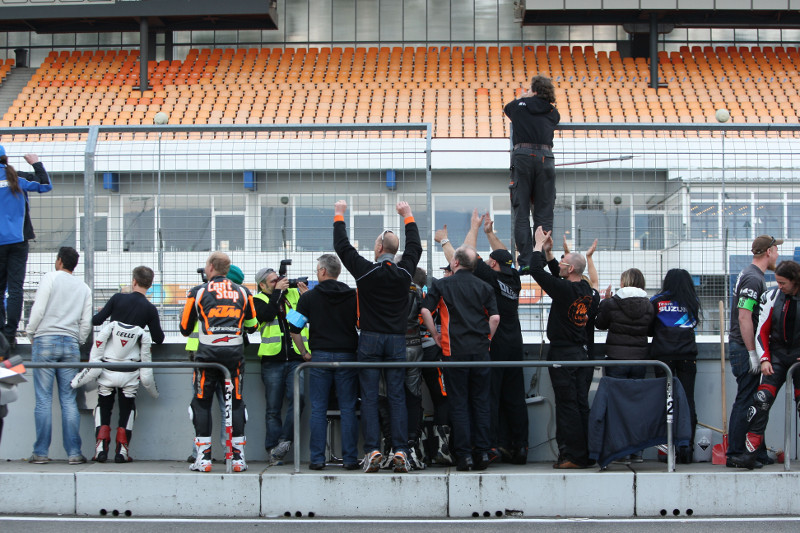 Conclusion of our Easter trip: If we could clone McWilliams twice and if those would not crash, then a spot on the podium would have been within the reach of the Naked Bike. But could have, should have, would have does not apply here. We were just happy with the situation. And all the full-faired bike riders should keep in mind: the cold beer after the race tastes even better with a boiling hot neck. 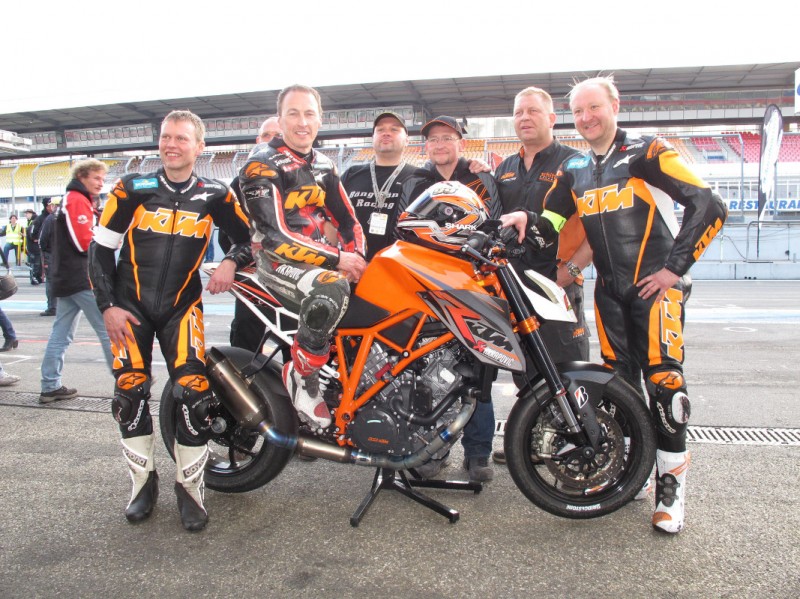 Congratulations to the winners of the 1000km at Hockenheim and many thanks to all the supporters of the “KTM Beast Boys”. Hats off and high five to Hubi, Norbert, Horst, Oliver, Konrad, Maik, Rakete, Tobi & Jeremy!