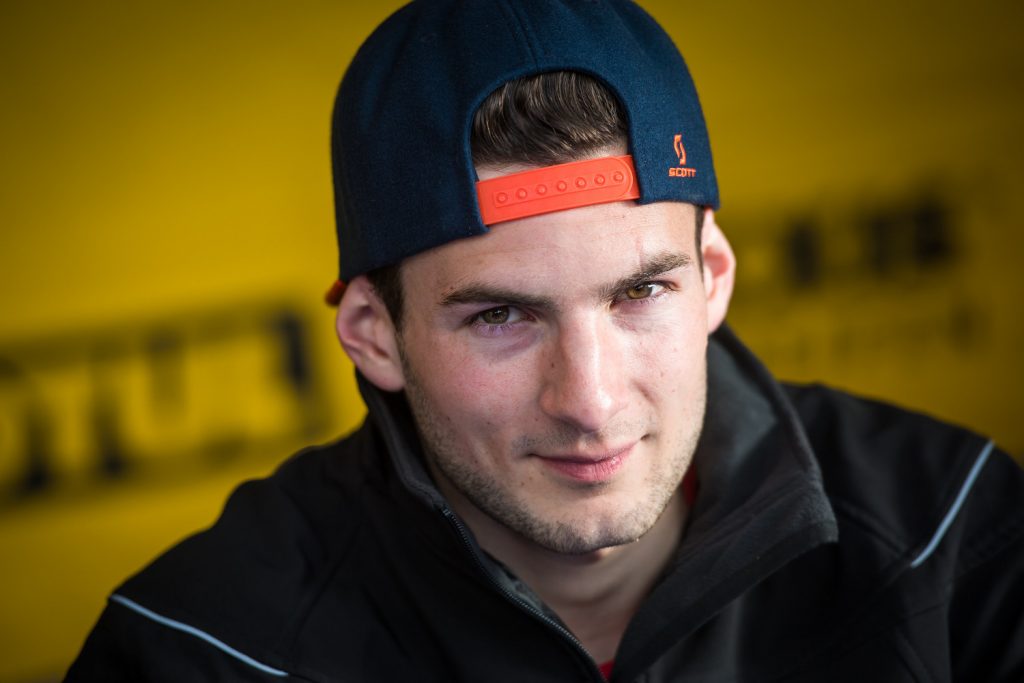 Dennis Ullrich: “The KTM is ideal for me”

Three titles in the ADAC Motocross Masters – Dennis Ullrich is the only rider to have ever achieved such a feat. And every time he makes it to the start line of the World Championships, the KTM rider is always up there with the frontrunners. Ullrich, who is now 23 years old, doesn’t let the odd setback throw him off course. 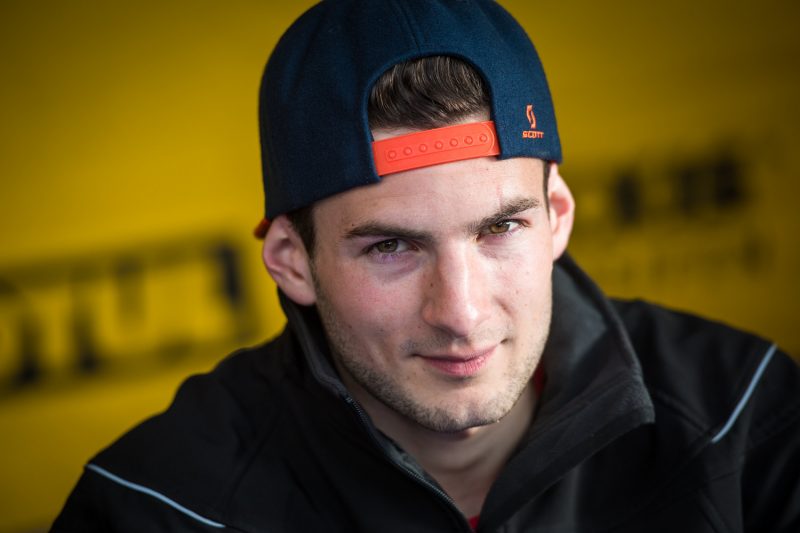 So, Mr. Ullrich, as a reward for your third Masters title you were invited a few weeks ago to compete in the Monster SMX Riders’ Cup at Schalke’s stadium. Only the best motocross riders in the world were invited to take part. Something of an honor, therefore, to be asked.
“Well, maybe so, but then again the organizers, Youthstream, were keen to have a German involved. Max Nagl had to withdraw from the event after injuring his back during the Motocross of Nations in Italy, so then it was pretty obvious that I would be chosen.”

How did it go at Schalke?
“Not so great. In my first race I was involved in a crash with a number of other riders right at the start, took a bang on my elbow, and had to pull out. In my second race the pain in my elbow proved too much and I had barely any feeling in my arm, so once again I had to pull out. It wasn’t until the third race that I made it to the end thanks to painkillers, and at least manage to finish in 13th place.”

Has your elbow injury healed now?
“Yes, so far so good.” 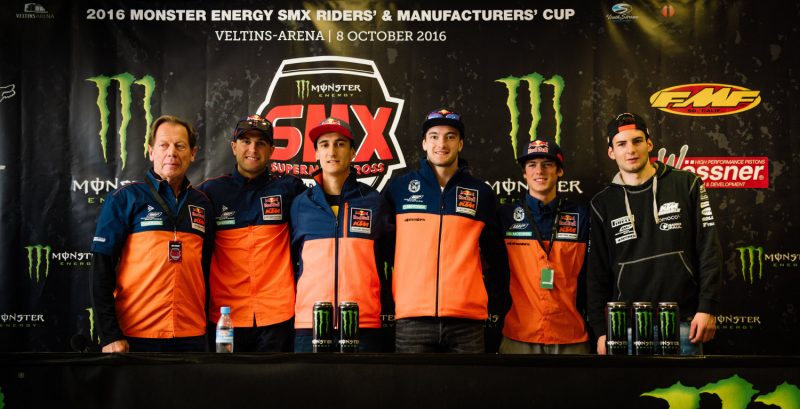 You had a strong season this time in the ADAC Masters. Overall winner once again with eight podium finishes in twelve races, four of which were first-place finishes. The switch back to KTM seems to have paid off.
“The KTM suits my riding style perfectly. I am one of those people with a relaxed, smooth riding style. The KTM’s tubular steel frame, which flexes slightly and is not over-precise, is perfect for this style of riding.”

Another facet of your riding style is that – in contrast with many other riders – you avoid revving the engine too high.
“That’s true. And the KTM is perfect in this regard too, because its motor delivers predictable torque throughout the rev range. This suits a rider like myself who rides at relatively low revs.”

So your return in the pre-season to KTM and your old team Sarholz has paid dividends?
“Absolutely. Sarholz is pretty much my family. I have a wonderful relationship with Burkhard Sarholz, and he allows me plenty of freedom. In 2016 everything just came together: The bike was top notch, the team was top notch, and I was mentally in a better place than last year.” It was back then, in early 2015, that your trainer and mentor of many years, Thomas Kneip, died. This set you right back, and then the season didn’t go to plan either.
“That was a really tough time for me. Thomas and I had worked together for so many years. I could always count on him, and he always stuck by me, even in times when things weren’t going so well. Then suddenly I had to hack it on my own. This was certainly part of the reason behind my 2015 season turning out so poorly.”

But now you have climbed back out of this low, and in 2016 things have been going fantastically well.
“Well, maybe, but the winter of 15/16 was definitely a tough time. Never before have I worked so hard on myself. Certain people had already written me off, and I wanted to prove them wrong.”

And that is precisely what you managed to do by winning the Masters title. Even on one of your occasional appearances in the MXGP you managed to achieve a fantastic result in 2016: sixth place in the second race of the French Grand Prix.
“Yes, that was awesome. But two years ago I even finished fourth in the Czech Grand Prix.”

Don’t you fancy an entire World Championship season?
“There is a high risk of working your ass off and then end up getting next to nothing out of it. I can’t help asking myself whether a World Championships season is worth that risk, either in sporting or financial terms. In terms of travel costs alone I would have to allow 80,000 euros for a World Championships season: flights, hotels, etc., etc. Then on top of that there would be all the costs associated with the team and the bike. It is not easy to cover costs like these.”

OK, so 2017 is going to be another season in the ADAC Masters, sprinkled with occasional starts in World Championship events?
“That’s the way it’s looking, yes. Even if I have to have some further discussion with Sarholz.” One motorsport magazine recently wrote that you are a pleasantly unspectacular guy who is involved in a highly spectacular sport. Is this a fair description of Dennis Ullrich as a person?
“Hmmm, maybe. I tend to be pretty reserved out on the race circuit. And I don’t get too carried away on Facebook or Instagram either. I’m not one for coming out with a load of pointless nonsense, and neither do I go looking for the limelight unnecessarily.”

What about the view that you are unspectacular on the racetrack? Earlier on you mentioned your rather relaxed, smooth riding style.
“I almost never ride beyond the limit. I have been involved with Motocross since the age of five, in other words, for 18 years now. In all those years I have only once suffered a serious injury. It was a broken arm. And that was – hang on, give me a moment while I work this out – twelve years ago.”

That is an impressively short catalog of injuries for a Motocross rider. To some extent that must be down to your excellent physique.
“Well, I’m not one of those people who spends all their time pumping iron in the gym. After all, I’m not out there trying to bend the handlebars. I need to keep going the full distance in a race that can last 40 minutes. Too many big muscles would be a hindrance rather than a help. All the same, I reckon I’m in great shape.”

OK, let’s dare to make a prediction: you will win the Masters title again next year. This will be your fourth title, and of course you’ll win it in Holzgerlingen again.
“That sounds good to me! (laughs). Because I clinched all three of my previous Masters titles at the meeting in Holzgerlingen.”

And that is fitting since you also belong to the Holzgerlingen Motocross Club.
“Exactly. So that makes it especially sweet to celebrate the victory there.” 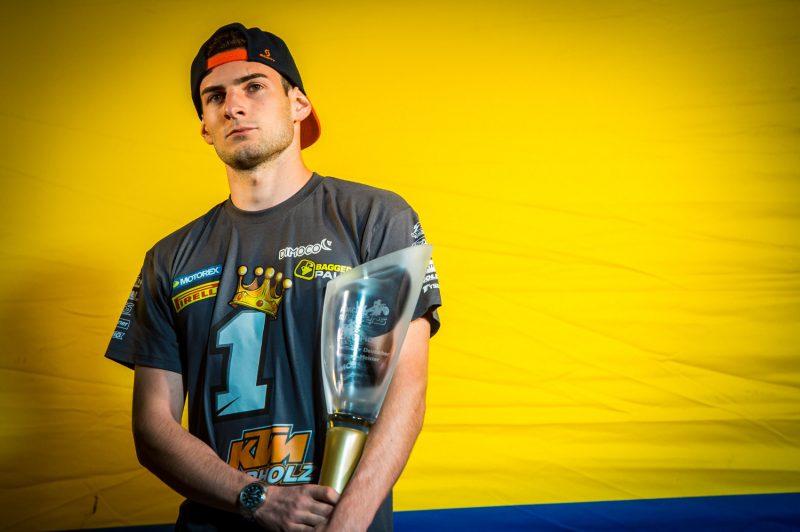 60 Responses to Dennis Ullrich: “The KTM is ideal for me”