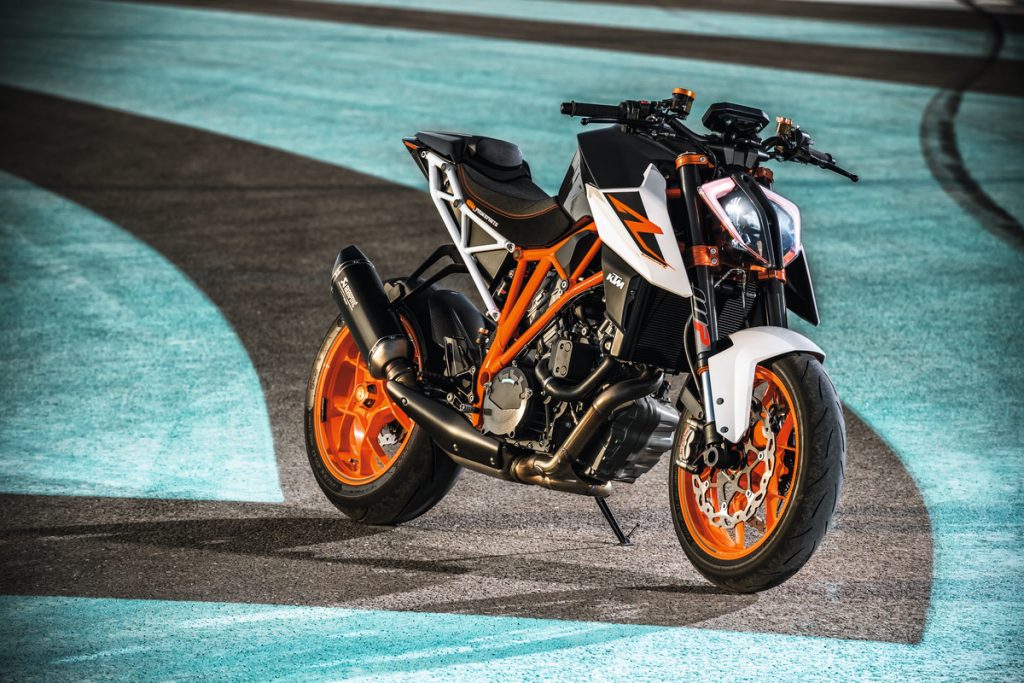 KTM’s BEAST is back! Well, in truth it never went away. But after three years of ripping down roads and tearing up tracks across the world it was time for KTM to give its super naked some version 2.0 treatment. Follow on from its unveiling at EICMA in Milan, the KTM BLOG takes a closer look at what’s new with the model year 2017 1290 SUPER DUKE R. 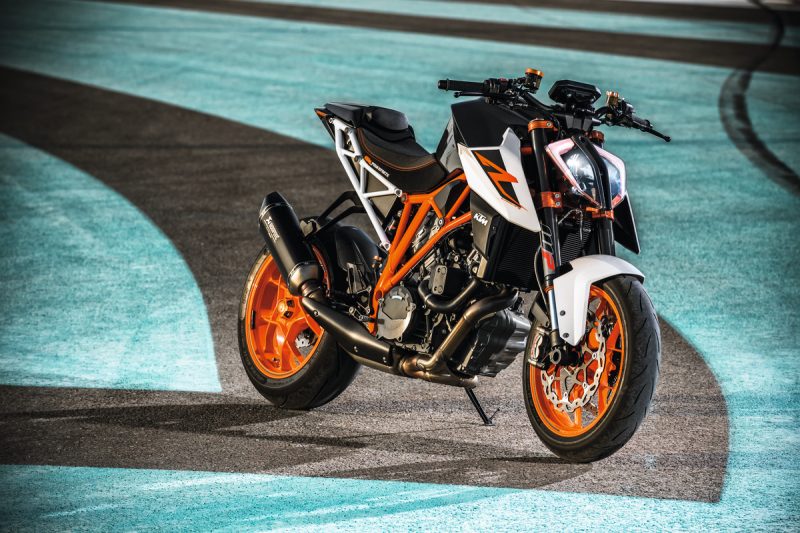 Back in 2005, the original 990 SUPER DUKE took over from the single-cylinder DUKE to set an even more aggressive attitude for KTM on the street. Riders loved it. But change is inevitable.

It’s just over four years to the day that KTM dropped the video of the fluorescent prototype version ‘escaping’ from a secret compound in a variety of jaw-dropping stunts; clouds of smoke emitting from its slick-shod ‘half-and-half’ painted wheels as the booming MotoGP-inspired Akrapovič provided a fitting soundtrack.

The following year the production version of the BEAST landed, staying true to the prototype’s looks but without the exhaust system we wanted (but that was never going to pass any sort of homologation. Shame). What the 1290 did for its 990 predecessor was to punch it clean in the face, take its wallet and then steal its lover. Bad ass. The bike delivered on its threat of stunning performance and handling, but had the added bonus of being every day useable (unless you turned the traction control off) and even suitable for long trips.

But as KTM never shuts the throttle of development we are now staring at the new face of a leaner and meaner BEAST. So what’s new? The KTM BLOG looked at the headline changes.

STYLING – The BEAST has a new face!
The distinctive, newly-designed LED headlight is the most noticeable change in the bike’s appearance. In order to reduce the weight usually associated with this kind of ultra-powerful light source, KISKA designers integrated the heat sink of the headlight as an integral design element while mounting directly on it the printed circuit boards (PCBs) as well. There’s also daytime running lights, which consist of six LEDs. The result is an incredible light output and better perception to other road users – safety first!

Other than the two new colors and graphics, in order to help differentiate the second generation bike at first glance and to emphasize in the predatory nature of the new BEAST, the side panels have been aggressively extended forward while the seat unit is new, giving more visibility to the trellis framework to make it ‘naked’ as possible. 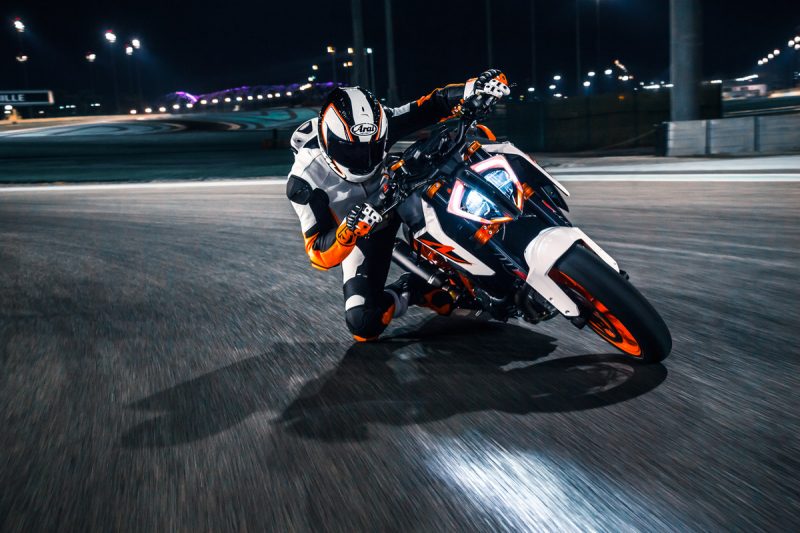 ENGINE – The power of progress
Performance was something the SUPER DUKE R was never really lacking, but the opportunity to improve the engine – not just for Euro 4 emissions purposes – was not one to be wasted by KTM technicians.

“The targets were to increase the engine power together with a slightly smoother torque curve from 5,750 rpm on,” Head of Product Marketing, Adriaan Sinke, tells us.

A 10 mm shorter intake flange, redesigned resonator chambers in the cylinder head increase refinement below 5,000 rpm while cutting CO2 emissions by about 10% and a higher compression ratio of 13,6: 1 thanks to the flat design of machined titanium inlet valves with chromium nitride PVD coating. The result is an apparent ‘intelligent’ increase by 3 kW (4 hp) to now 177 hp. The maximum torque is now delivered smoother and between 6,750 rpm (140 Nm) and 7,000 rpm (141 Nm). This is one punch we can’t wait to receive … 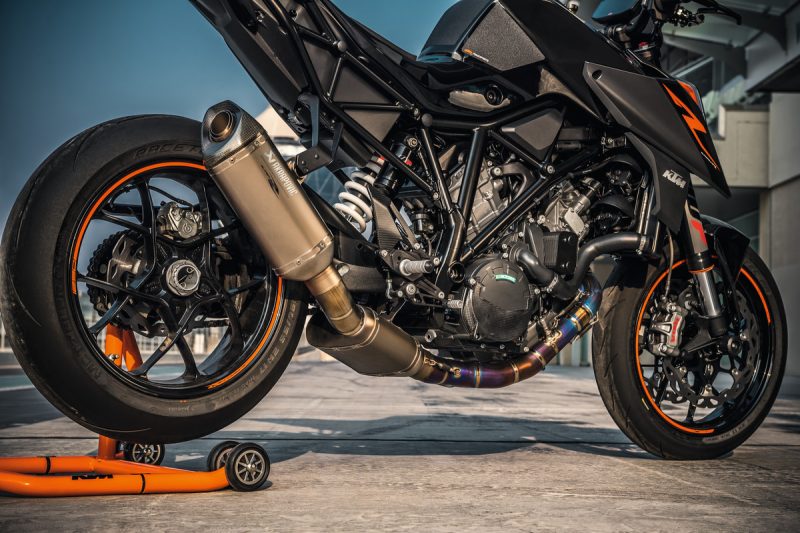 ELECTRONICS – more choice at your fingertips
This is where the biggest changes come from with the new SUPER DUKE R. As standard, riders will again tame the BEAST with help from sophisticated electronic rider assistance systems such as MSC (Motorcycle Stability Control) which controls the lean angle-sensitive MTC (Motorcycle Traction Control) and ABS (Cornering ABS) with Supermoto mode. The three ride modes (Street, Sport and Rain) remain, allowing to change the throttle response and traction control interference. Alongside these is the additional of cruise control, activated on the left bar, and the KTM RACE ON keyless system, which also operates the fuel filler and steering lock. And let’s not forget cruise control as standard. 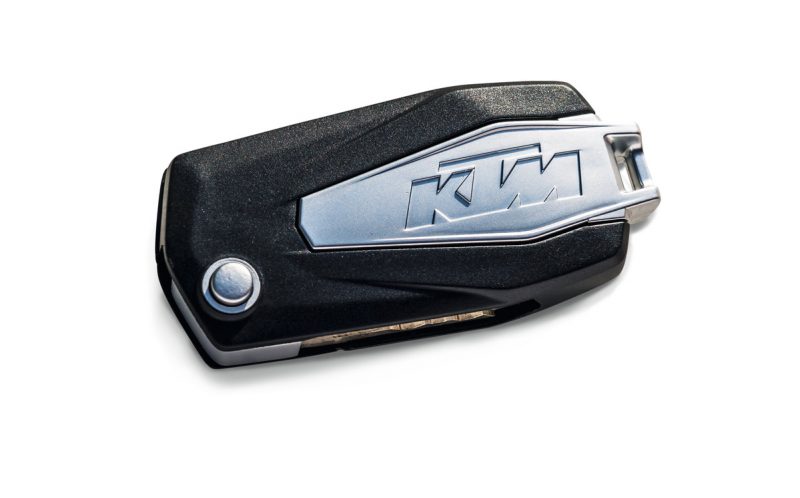 But where it gets really interesting is with the two optional electronics packages to give riders far more scope to exploit the 1290.

PERFORMANCE PACK: Besides the Motor Slip Regulation (MSR) – like the reverse of traction control for helping prevent rear wheel lock-up under hard deceleration or accidental throttle chops – this pack includes the quickshifter+ for fast up and down clutchless shifting. The final ingredient is the ‘KTM MY RIDE’ for wireless smart phone integration with the new TFT display. This isn’t designed to be a dashboard distraction but seamless use of a smart phone while riding for features like taking calls, playing music or working with a sat nav.

TRACK PACK: For the hardcore users who want to try and extract the maximum from the BEAST, the TRACK PACK includes the new MTC spin adjuster, which is finely adjustable in nine stages to allow the rider for example to instantly respond to fading tires to stay at the sharp end of the time sheet. These freely configurable engine maps even include a more aggressive setting and the anti-wheelie mode can be disengaged when you need to take the chequered flag in style. There’s also launch control, allowing the optimum fast starts without fear of parking the 1290 upside down. Pin the throttle and the electrics take hold. Clever stuff and a first on a KTM.

Both packs can be fitted at any time from an authorized KTM dealer and also used in conjunction. The TRACK PACK features are only available as a group, but the PERFORMANCE PACK features can be installed separately, but the pack price is cheaper than buying each and every feature separately. TFT DISPLAY – A dash of color
The 2016 690 DUKE was the first KTM to get a TFT display, but the 1290 R’s version takes full color displays to a new level – it’s practically a bar-mounted iPad. Everything to do with the current status of the bike can be displayed to your preference and the left bar-mounted menu switch – similar to the previous model – makes it super easy to scroll through the various features and settings of the bike. Its color combinations react differently to day or night conditions, as well as when the bike is too cold or hot. 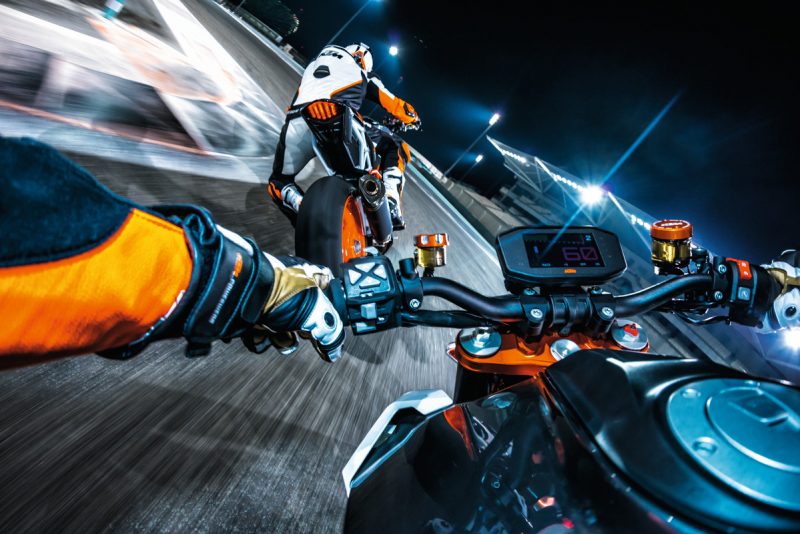 CHASSIS – Sharpening the tool
The mega thing about the first 1290 SUPER DUKE R was that it could be a bonkers hooligan machine, Supersport bike bully or – bizarrely – an everyday useable motorcycle also capable of comfortable cruising. KTM haven’t really wanted to upset this almost unique balance, so the trademark steel trellis chassis and matching subframe remain untouched, but they wanted the R to be more ‘racey’.

Increasing the SUPER DUKE R’s sporty credentials and putting a new spring in its step has come from firming up the new WP split fork (rebound in the right leg, compression in the left) along with the WP shock absorber, tweaking the settings for ‘high-speed excellence’. A wider and lower handlebar, placing more weight toward the front wheel is the final detail. A lot of development went into this setup, which was proved on track recently when Jeremy McWilliams, Chris Fillmore and Hannes Maier made it a 1-2-3 on a trio of SUPER DUKE Rs at Mugello for a round of the Pro Twins series.

So what’s it like to ride? We’ll find out next month when the bike is launched to the world’s media at the Losail circuit in Qatar.