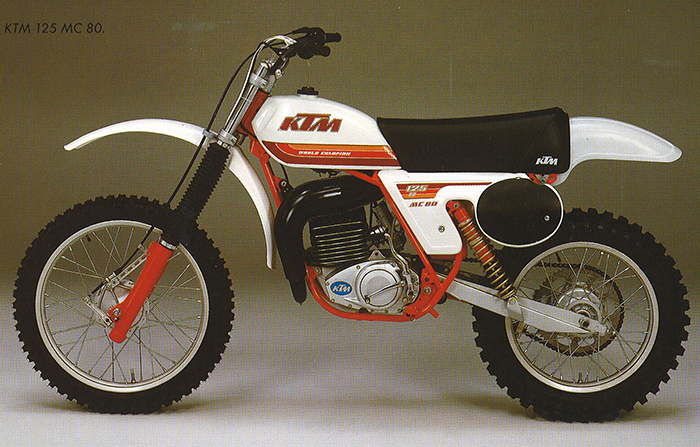 Just one year after KTM started production of motorcycles in 1953, the company announced its first production record – the 1000th motorcycle, a R 125 “Tourist”, left the factory doors. Fast forward a quarter of a century and the 50,000th KTM 2-stroke engine rolled off the production line; as a result the Austrian Quality Seal – a quality award for Austrian Products – was awarded to the Mattighofen-based manufacturer.

At that time, the ‘anniversary engine’ was one of an ultra-modern range of sports engines, built with various displacements ranging from 125 cm³ to 420 cm³ and used in the competitor models GS 80 and MC 80 from model year 1979. 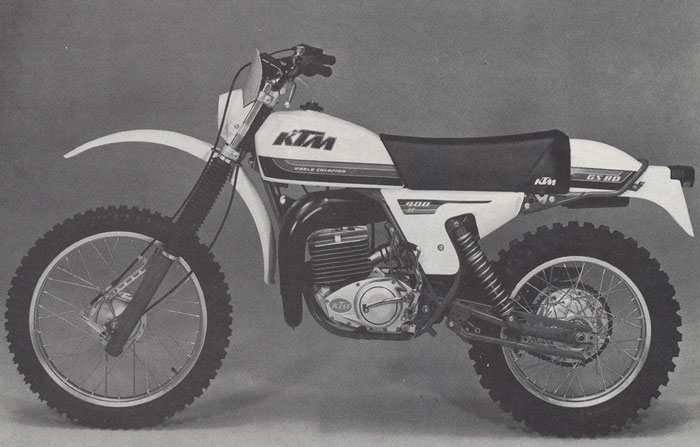 Why did it take 25 years from the production of the first KTM motorcycle to the 50,000th KTM engine? Let’s take a look at this long history. In the 1950s, many motorcycle manufacturers were assembly companies – when it came to the engine they turned to tried-and-tested designs from special engine manufacturers, such as Fichtel & Sachs. And back then, KTM was no different; its very first bike, the R 100, housed a 98 cm³ Sachs engine which was produced under license by Rotax in the neighboring Upper Austrian town of Gunskirchen. 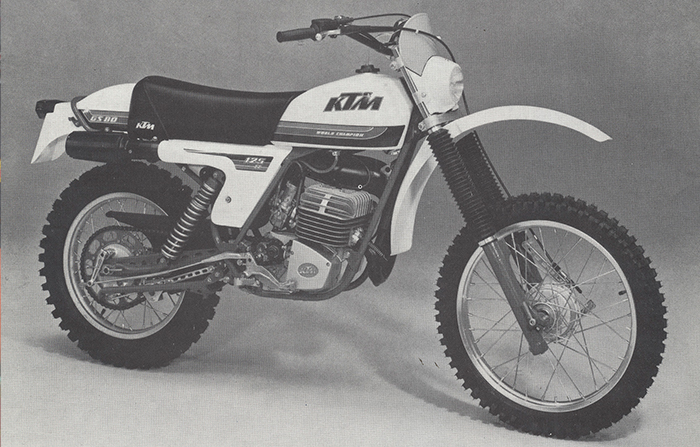 Apart from a 50 cm³, 2-stroke engine for the “Mecky” moped, KTM stuck with the proven Rotax-Sachs units until they ceased motorcycle production at the end of the 1950s. As the focus shifted to 50 cm³ mopeds and scooters in the early 1960s, companies also turned to tried-and-tested solutions for the new generation of vehicles – while the Austrian domestic models were supplied with Puch engines, exported models were driven by a range of Sachs engines. Even the offroad sports bikes which were built at KTM at the end of the 1960s at the initiative of American John Penton were powered by 100 cm³ or 125 cm³ Sachs engines – at the time the most successful small unit in offroad racing. 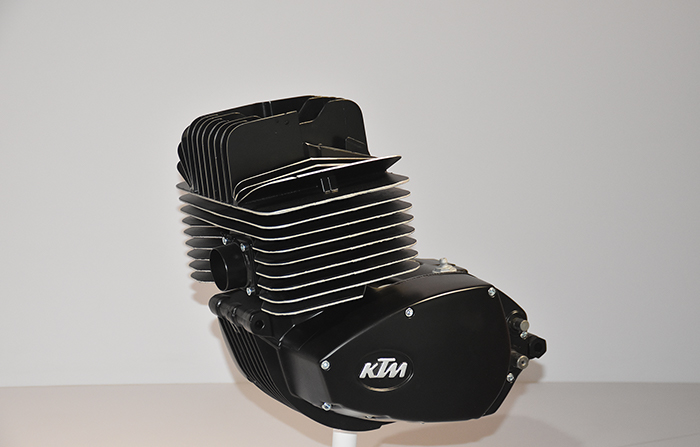 And it was also Penton who triggered the development of a KTM sport engine. To compete in the up to 175 cm³ class, Penton kitted several Sachs engines out with his own cylinder. Together with the 54-mm-stroke provided by the Sachs design, this resulted in a displacement of approximately 150 cm³. But, since every cubic centimeter mattered, particularly on small engines, and the permitted displacement limit had not been reached, it soon became clear that the engine in the “Penton Jackpiner 175” was only ever meant to be a temporary solution. As Fichtel & Sachs didn’t have a suitable engine available, KTM had no other option but to build their very own engine, so as not to lose John Penton to the competition. 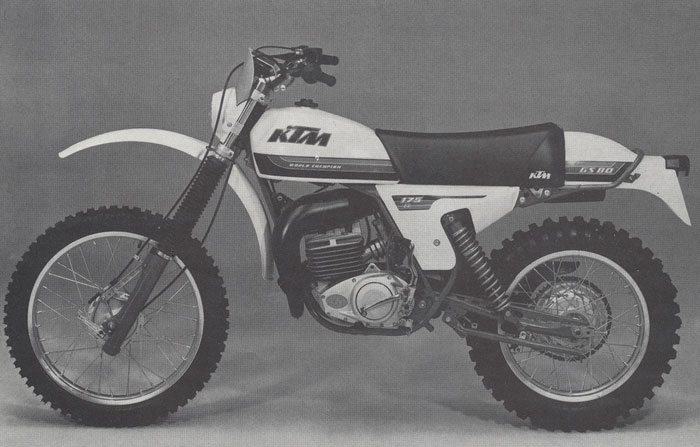 And so the new KTM sport engine was unveiled to the public in time for the 1971 sporting season. In doing so, KTM had made the leap from assembly company to a manufacturer who produced both the chassis and the engine itself. There were two noteworthy elements to the new design. The 175 cm³ version was designed to be the basis for versions with bigger displacements right through to an engine for the 500 cm³ class and thanks to the claw-shifted 6 speed transmission, the selector key shifting which had proved to be the Achilles heel of the Sachs sport engines, became a thing of the past.

Manfred Klerr demonstrated what the new engine was capable of by promptly winning the Austrian national motocross championship on a prototype. 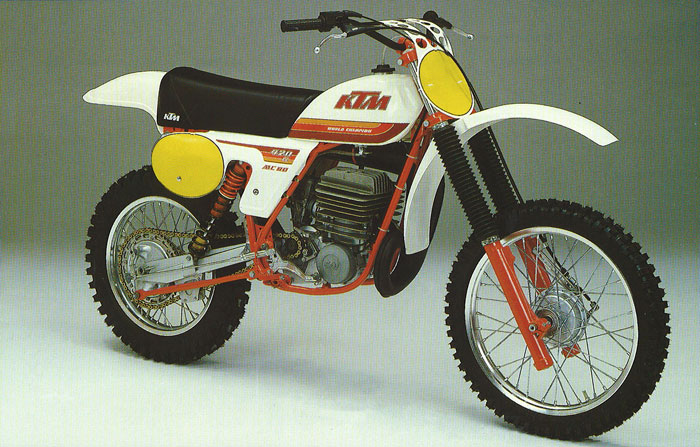 Series production began in 1971 – initially for the 175 cm³ version, with the bigger displacements following shortly after. In 1976, the lower end of the range was rounded off with a 125 cm³ engine – there was also a 100 cm³ version, which Mauro Miele rode in the offroad European championships, but, unlike the other engines, it was not available to buy. 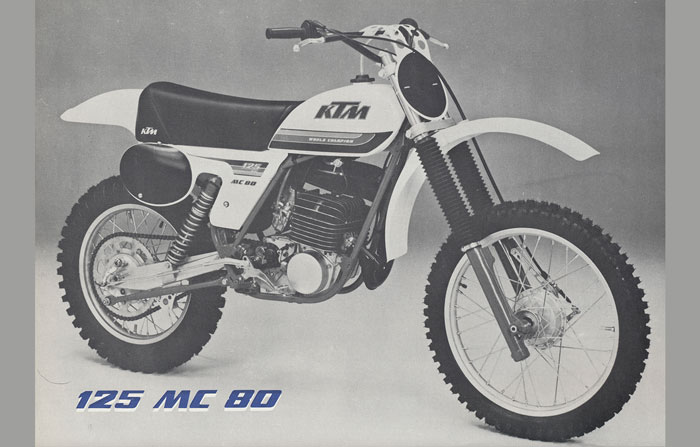 KTM remains true to the 2-stroke to this day, offering the ultra-modern KTM 150 EXC TPI, KTM 250 EXC TPI and KTM 300 EXC TPI competition bikes. The launch of the TPI models made KTM the world’s first manufacturer to use electronic fuel injection on 2-stroke engines. The advantages are obvious – On top of significantly lower consumption and reduced emissions, there is no need to adjust a carburetor with this system.

Immerse yourself in the READY TO RACE world and the history of KTM by visiting the KTM Motohall in Mattighofen.