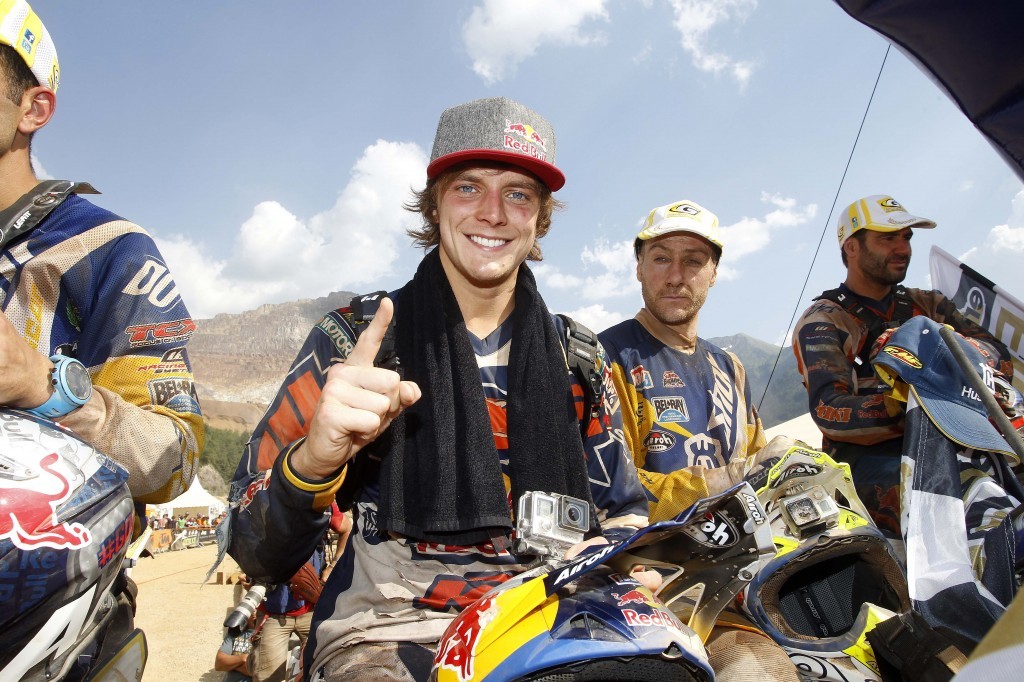 Julian Stevens has been working in the Enduro scene for over 25 years and is now known as being Jonny Walker’s right hand man. After an ultra-tough Erzbergrodeo, where Julian was also exhausted, covered in dirt and can be seen encouraging Jonny all the way through the race, we ask him about his role as Jonny’s manager as well as the Erzbergrodeo 2015.

“I expected it to be the toughest one yet. I had already said to quite a few people it’s around 20-30% harder than that before, because of the weather, the length of the track and the severity of the sections. Today we arrived at some sections that nobody found in the pre-walking. They had never been ridden before, were completely natural, and impossible to get through. Fortunately the riders did a great sportsmanlike thing to club together and pull each other up.”

The race is known for being held at the extremes of all weathers, and this year the intense heat saw riders battle to the end, helping each other, for four riders to be declared winners. Julian’s involvement with Jonny Walker is incredibly varied, from contract organizing to supplying the young Red Bull KTM star with everything he needs going into an event, and can be seen playing a pivotal role right the way through the Red Bull Hare Scramble.

“Pre-race my job is to satisfy all of Jonny’s needs from menial tasks and going to the shops, to the race planning, trying to organize a team to help, his media things, sponsors. Then during the race I try and follow him around the course, keep him in form, give him energy gels, drinks, give him advice and support basically. If he needed assistance like in the forest, we went with ropes so he could pull the bike up the hill. It’s a big range of tasks.” 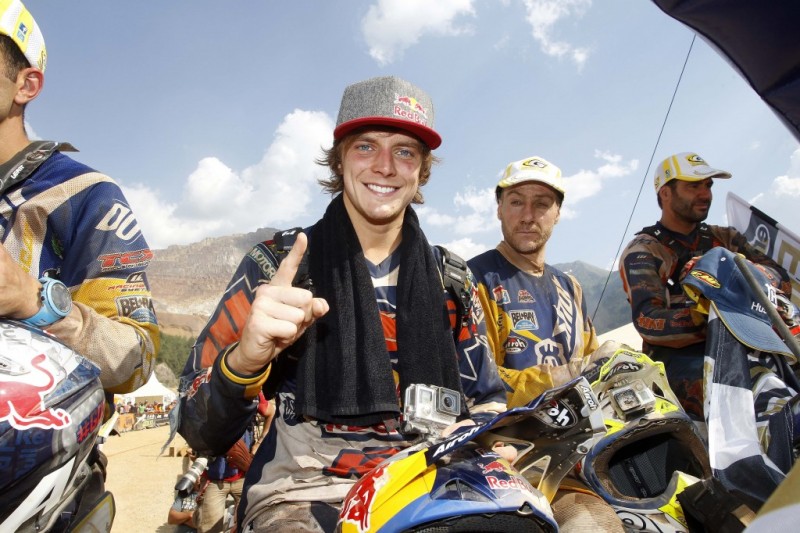 Julian came back to the paddock covered in dust and dirt, exhausted from climbing over the rocks of Carl’s Dinner and maneuvering his own bike within reaching distance of Jonny, while clambering up and down tough terrain with bottles of fuel and water. It’s certainly not an easy task to support a rider at an event like the Erzbergrodeo.

“Sometimes you can’t get the bike exactly where you want to be, so you have to run down, or run up to the section where the rider is. Of course it’s hot, we’re wearing a lot of gear and carrying a lot of stuff, so it’s intense on the helpers too. You need to be a paratrooper to do this job!”

“We taped water to the support bikes and we didn’t have enough. We didn’t really have enough fuel, because the fuel stop was so early in the race. Normally the bikes can do about an hour and a half, but they fuelled after 30 minutes, and there was three and a half hours to go after that fuel stop. We carried some fuel in containers, but we only just arrived at the finish. Jonny broke the radiator so we constantly were trying to put water in the bike, it was a tough day.” 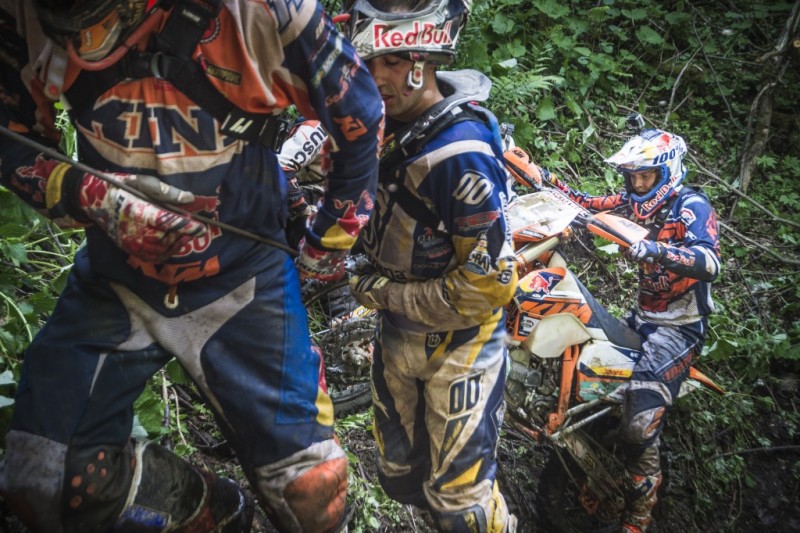 Most motorcycle mechanics have come from a heritage of motorsport in the family, or perhaps were former riders themselves. Julian has been in the sport for years after riding himself, and remains completely passionate about being involved.

“From a young age I’ve been involved in bikes. When I left the college for engineering I worked in a bike shop because there weren’t engineering jobs. From there I raced, and wanted to be a good level rider. I reached a plateau where I didn’t have the support, so I decided to become a mechanic.”

“I worked for Mervin Anstie in 500 Grand Prix, then went to KTM with Paul Edmondson, who won the first ever Enduro World Championship in 1990, and that was 25 years ago! Since then I’ve worked with Paul, David Knight, Taddy Blazusiak, Tom Sagar, Juha Salminen, then Jonny for the last four years. It’s in the blood, and people are really passionate about it. People do this sport for the right reasons – it’s not an ego trip, or to pose around in the paddock, you’re behind the scenes dealing with lots of things and working hard. For the riders it’s one of the toughest sports. You’ve got to be incredibly fit, an all-round rider and have the endurance and motivation to survive the events.”

During the race Julian can be seen clambering over huge rocks to reach Jonny, and is close to him while talking to him all the time. This encouragement is so important to help the rider or help him get out of difficult situations. The next stop for Walker and his crew is the Red Bull Romaniacs, but we’re sure they’ll all need a good rest before the next race preparations start. 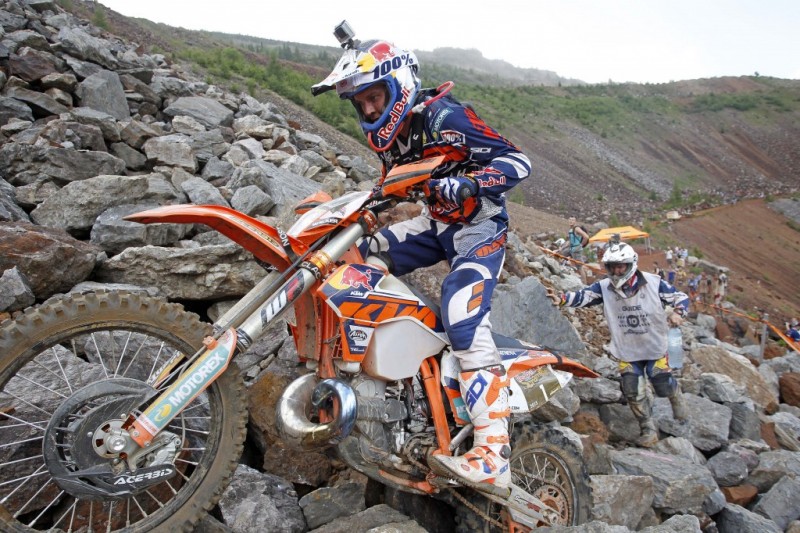 “Most of the time Jonny has it fixed in his head where he needs to be, but if he gets off line then I can tell him to come back on himself or move a little. The moral support is important, and quite often I’m just putting cold water down his neck, trying to keep his body temperature down.”

“The other guys that came with us (to Erzberg) also were meeting him with cold water, which makes a big difference to keep him fresh. If the body temperature rises just the slightest amount it’s easy to lose a lot of energy, and mental capability.”

“We are already talking about the future and we’ll debrief the race before starting on Red Bull Romaniacs, which is quite different from the Erzberg. It was interesting for the result to be like this for one year, and we were lucky the guys could make it to the finish within the four hour time limit, as it’s made for a slightly different story.”

“I haven’t looked to see what it looked like on television yet, but one time is okay and we’ll be talking about it for a while. I’ve always been of the opinion if you make this sport too elitist it will kill the sport. It needs to be difficult, but not that the top 10 guys can’t finish, and I don’t believe that the riders should need help. Hopefully the course will be altered next year so a rider can reach the end as the ultimate winner.”