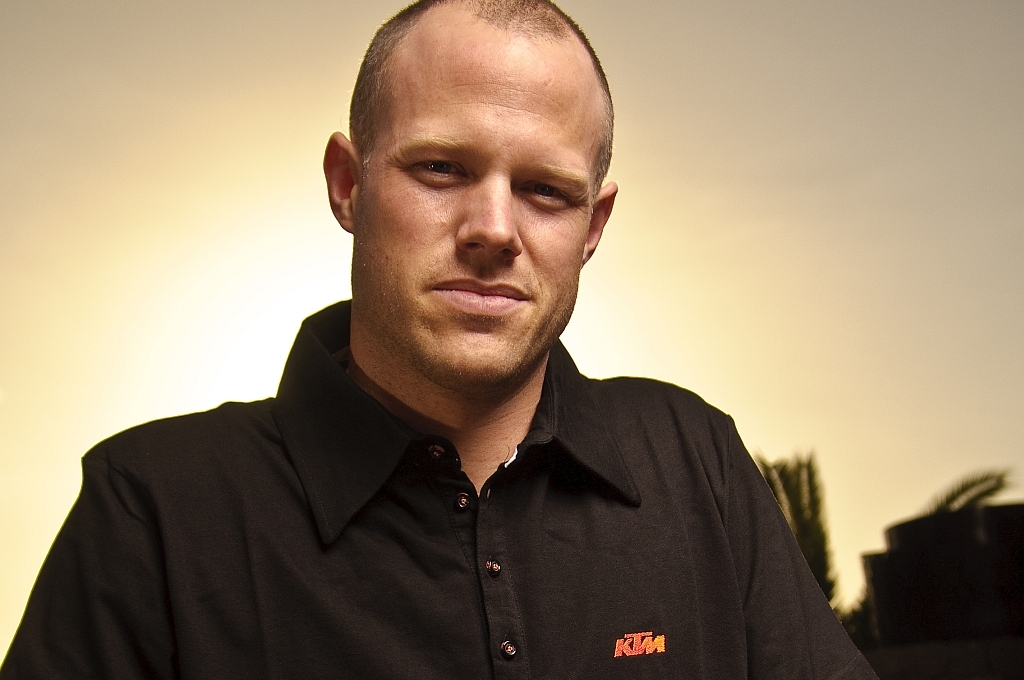 Interview of the month: Re(ar)view with Philipp Habsburg, Head of KTM R&D

Short before the end of season 2013 we grabbed some precious moments with the man responsible for KTM’s vast array of models and new technology over the last decade – Philipp Habsburg, Head of KTM R&D.

Philipp Habsburg is a busy man. The Head of KTM R&D department has been under the cosh for the better part of the last decade accelerating the factory’s efforts towards new and mouth-watering vehicles that have firmly established the Austrians in many sectors of the motorcycling industry. With a flick of the recorder switch and one eye on the clock we grabbed the technical ‘master’ for some reflection. 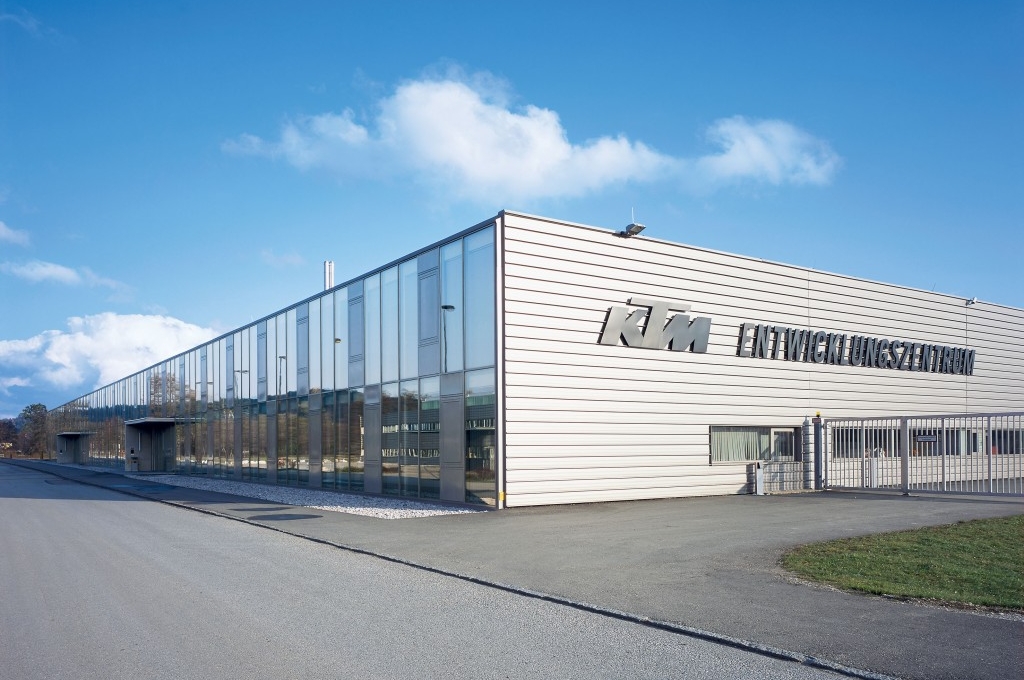 Philipp, it seems like 2013 was another busy year in terms of output from the factory…
“Well, I have been at KTM for fifteen years and every year there has been a new challenge. Again for 2013 there were a lot of introductions of new motorcycles. We had the new 1190 ADVENTURE at the start of the year, which was a new step in street motorcycles for KTM. We had a big increase in sales volume from around 2,000 to almost 10,000; that was tremendous for us and a big help in pushing the R&D forward for street motorcycles again. The next one on the street side was the 2014 version of the ADVENTURE and in September the new motorcycle stability control (MSC) which makes that bike the safest in the world; and those are not my words, I read them in a magazine! We are pretty proud that this title is tied to a motorcycle in KTM and not anywhere else.”

“The 2014 version of the ADVENTURE with the new motorcycle stability control (MSC) makes that bike the safest in the world; and those are not my words, I read them in a magazine! ”

How do you feel about MSC? This was quite a significant surprise for the bike world…
“In KTM’s world this was a completely new dimension. We knew the technology from the car industry and it is quite easy to implement there because the driver is never really changing position in his seat. It is two-dimensional; you can turn left or right and that’s it. In motorcycling there is that third dimension of lean and then the consideration that the rider isn’t always in the same place and the centre of gravity shifts. So overall you need a few more sensors on the bike. The lean angle sensor measures five things so it is a real gyro and it does a lot and the electronics knows where the motorcycle is. That is the key element for the electronics to function and to know when to brake and when not to or how much to.”

How will KTM use MSC in the future?
“For sure it will also come down to some other motorcycles and this is our plan. You can compare it to the car industry again where these innovations first come onto the top of the range models and then filters through to other areas. It will happen year-to-year.” 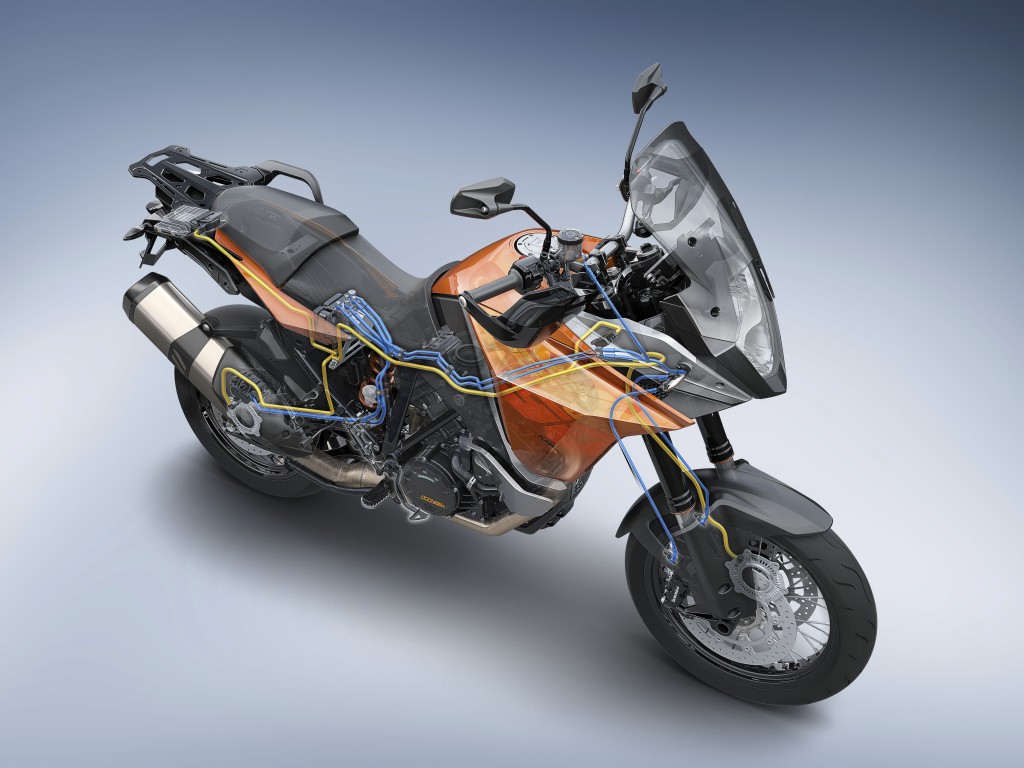 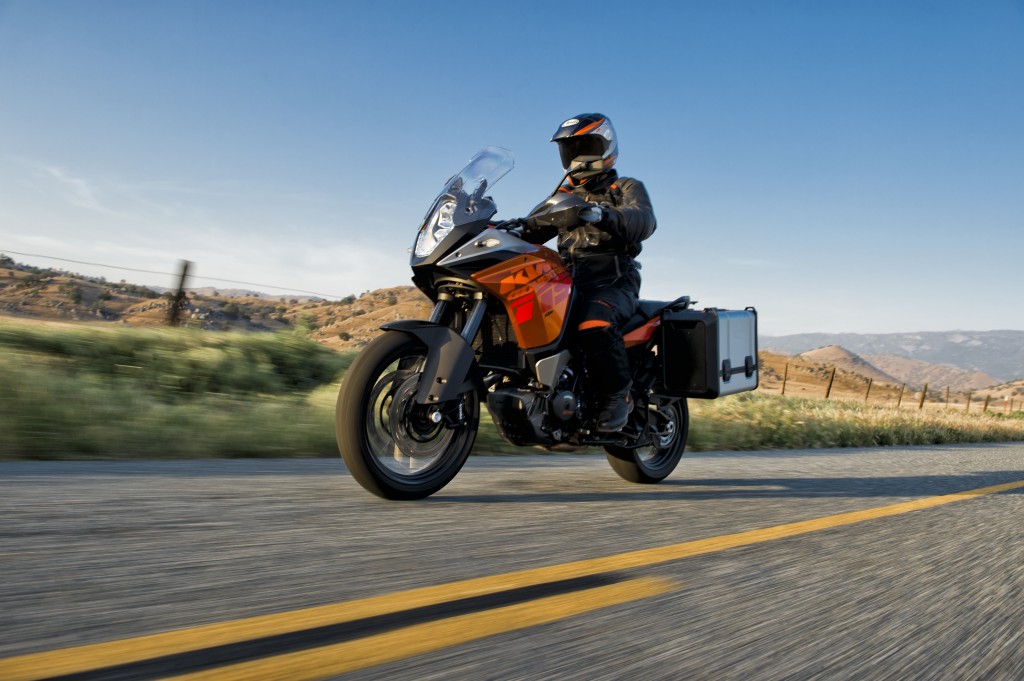 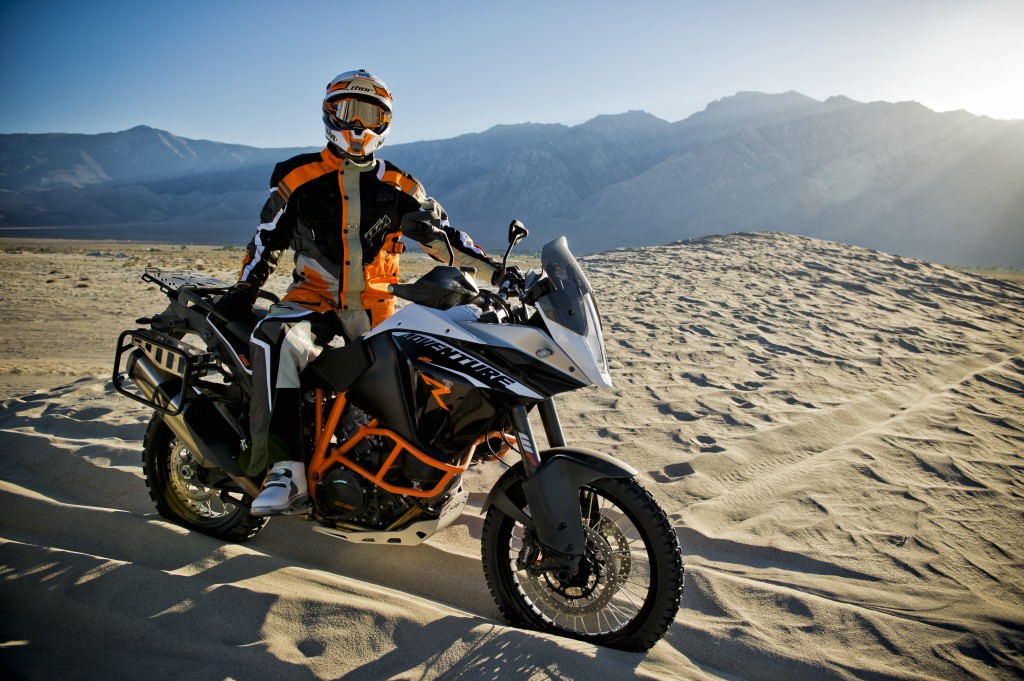 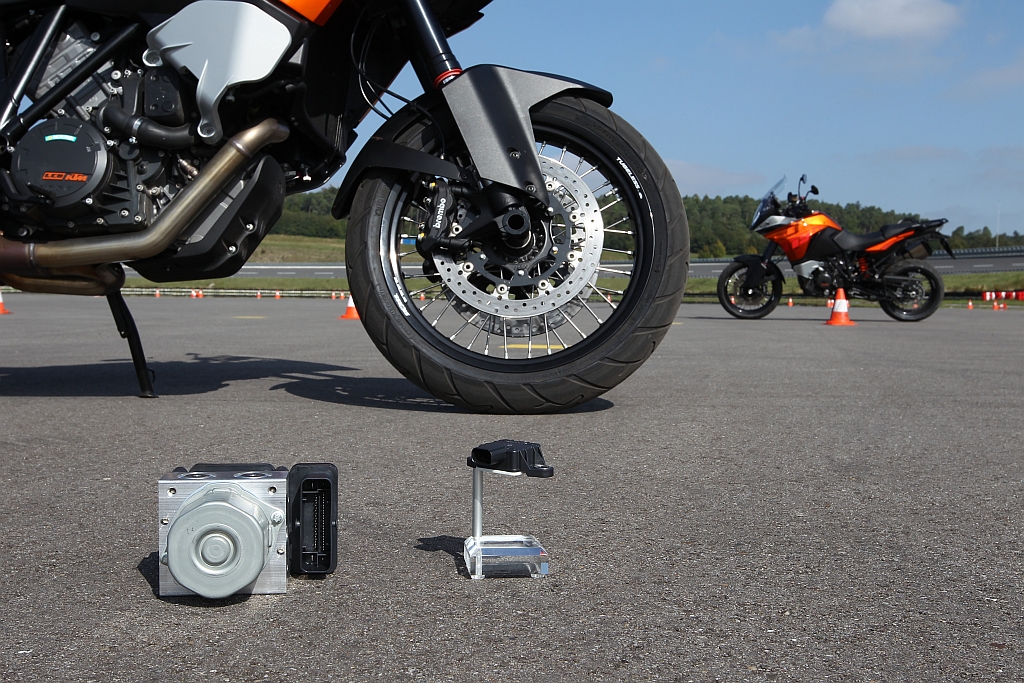 The RC bikes were another new feature this year and were unveiled at the EICMA show. What was the thinking behind these 125, 200 and 390 models?
“The strategic plan behind these bikes – as always in KTM – is to have a sporting tie-in with our models. We started two years ago with our Moto3 race team, which we think has been a success because we are actually beating the world’s biggest motorcycle manufacturer and we have more than 20 consecutive wins; we are quite proud of that. The natural progression is to take a homologated version to the street. We took a lot of technical elements from the Moto3 bike into our new model line-up.”

Such as?
“In Moto3 I think one of the things that differentiates KTM from the other brands is the steel trellis frame. We have a lot of experience with that and we think it is the better way to build frames, compared to the aluminium versions from our competitors. We are working hard on this area and what you see on the RC models is an adaption from the Moto3 bike but for street use. For sure it is not 100% the same because of the demands of racing but there are important similarities.” 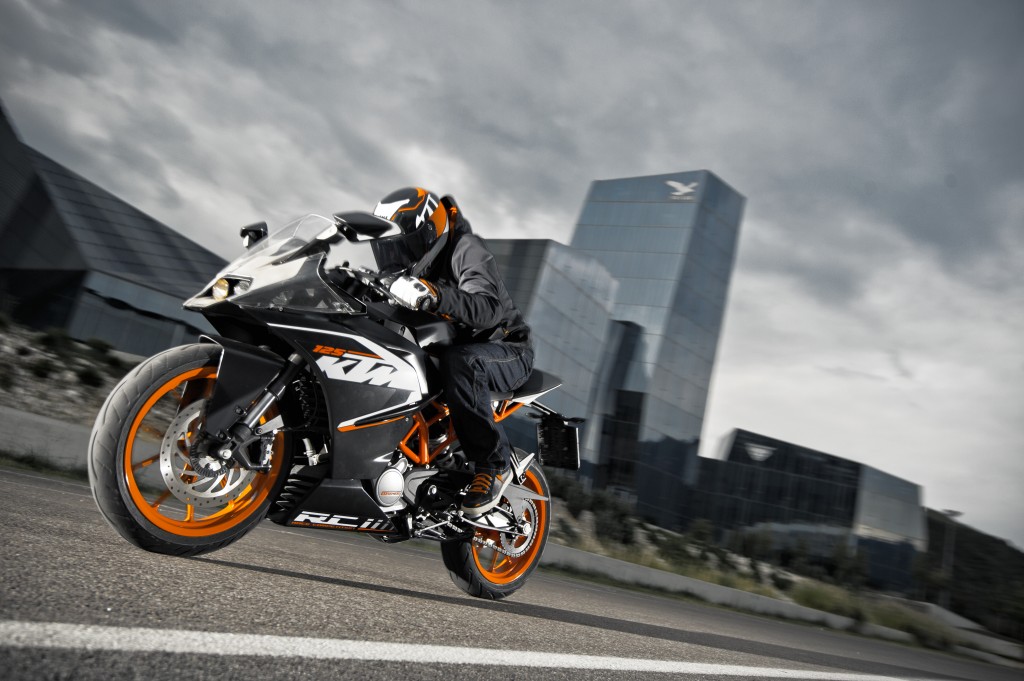 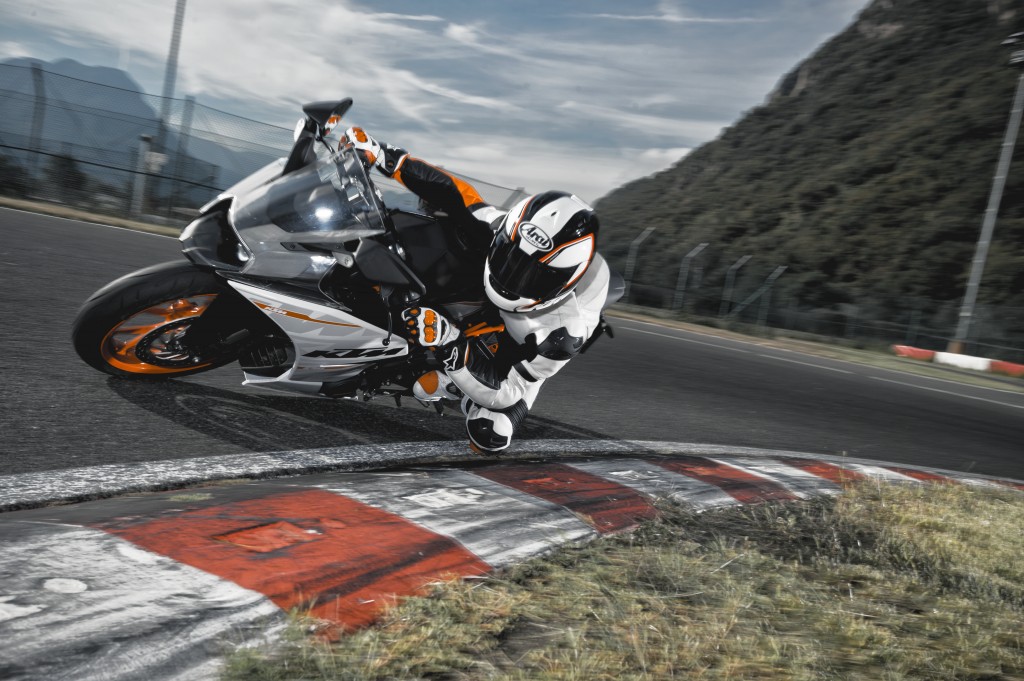 Looking around the KTM Street ‘spectrum’ it seems like the RCs complete the picture. They fill the gap between the RC8 and the Super Dukes…
“There are a few other projects to do, so there are some more motorcycles to come but I believe that we are now nearly fully equipped in terms of our line-up. There are still some ‘missing links’ that we want to fill up for next year. For sure there is new technology and we are working hard on it. The MSC is not the only thing we are bringing out; there is a lot to come. We just introduced the 1290 SUPER DUKE R  to the press a few weeks ago and it was great to see so much enthusiasm about it. The travel bike segment – where we have the ADVENTURE – and the naked bike – where we have the DUKES – are the growing segments for the future. There are others that are slowing and shrinking but these two are expanding so we are taking care that we are fully equipped. Don’t forget there is also our full off-road line that we revise and present every year. There is a lot to do now in KTM!”

How has Husqvarna drifted onto your landscape?
“Husqvarna is completely involved in our R&D in Mattighofen. We have our own Husqvarna group but it works together with the KTM guys. We are looking for synergies and also spreading the know-how of KTM. From our point of view the Husqvarna products were not really ‘up-to-date’ over the last few years. The sales quantities are quite low and at the moment it is not possible to do a completely new range with new engines and chassis. The current arrangement is the only possibility to have a strong product range but then there are also a lot of things that differentiate the brands from each other, and it will go even more this way in the future.” 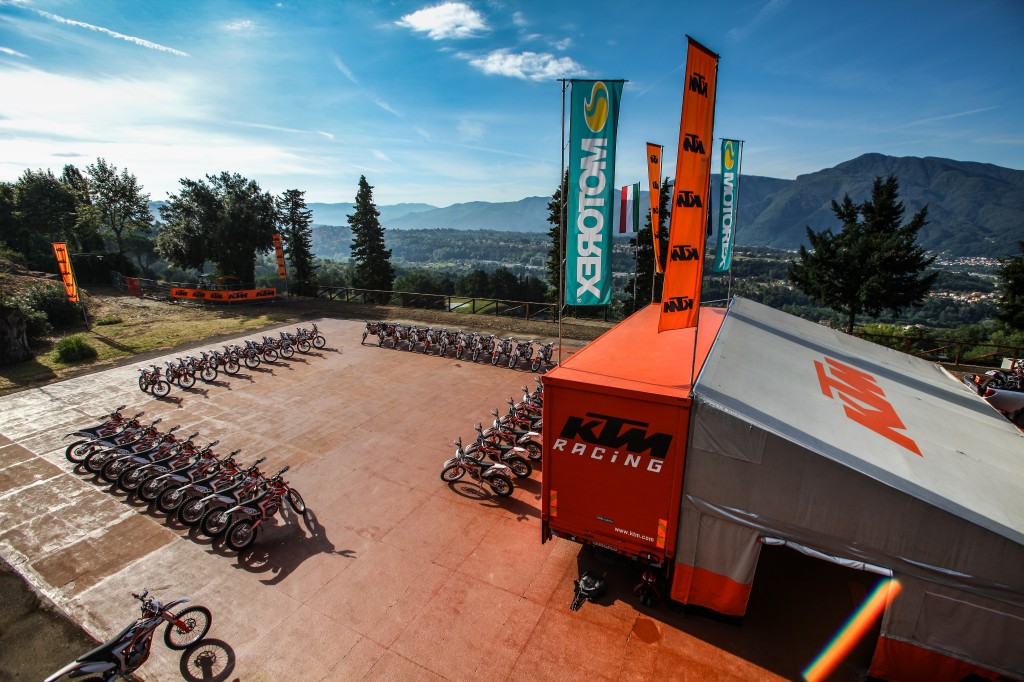 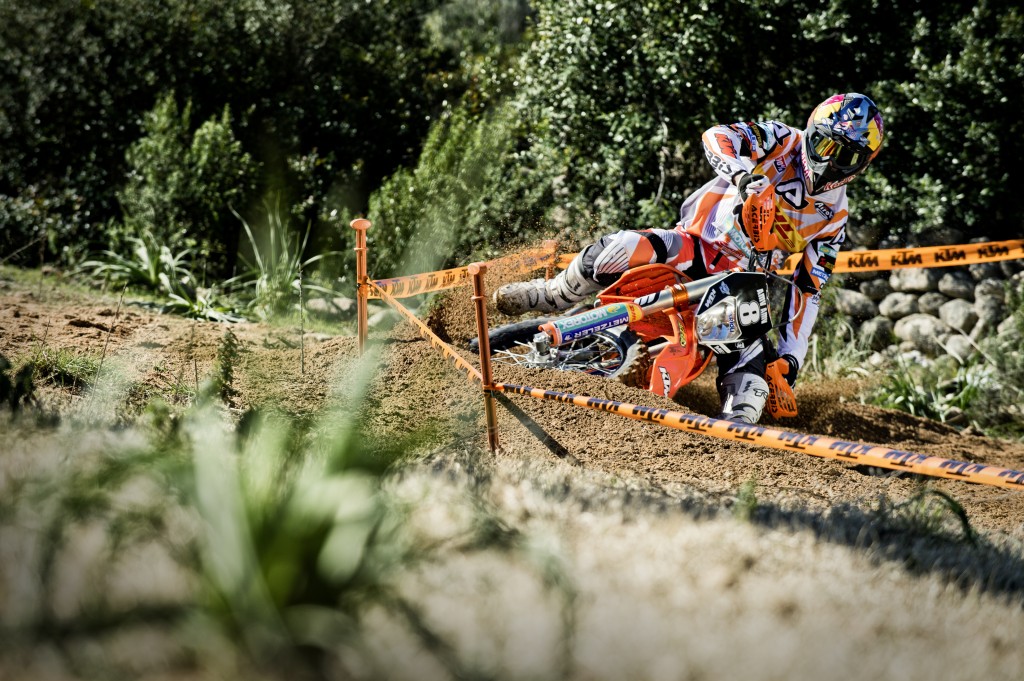 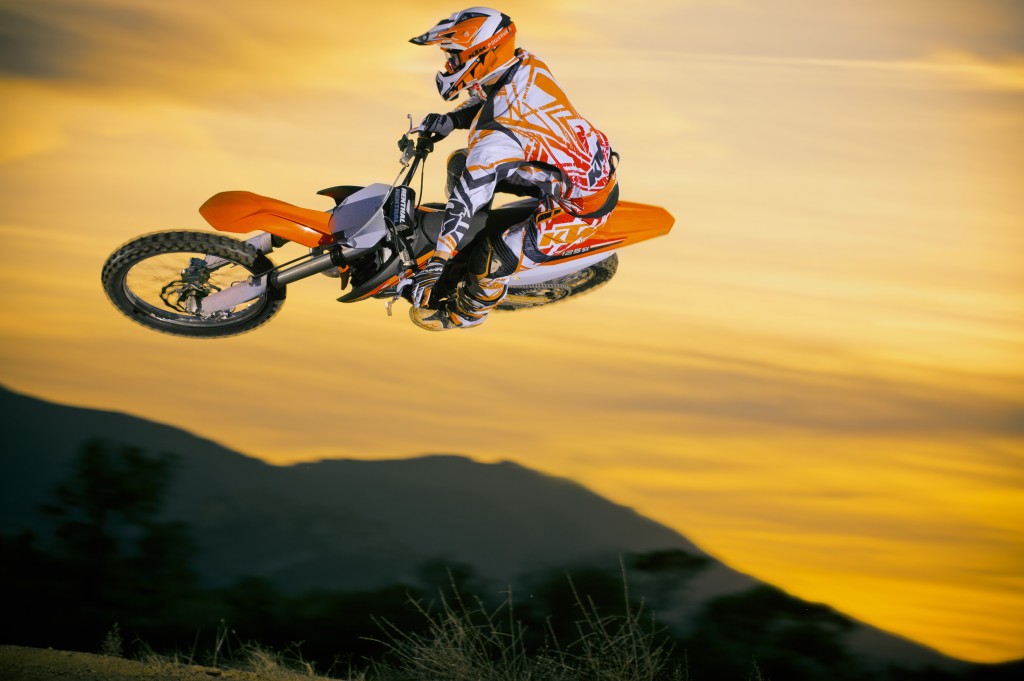 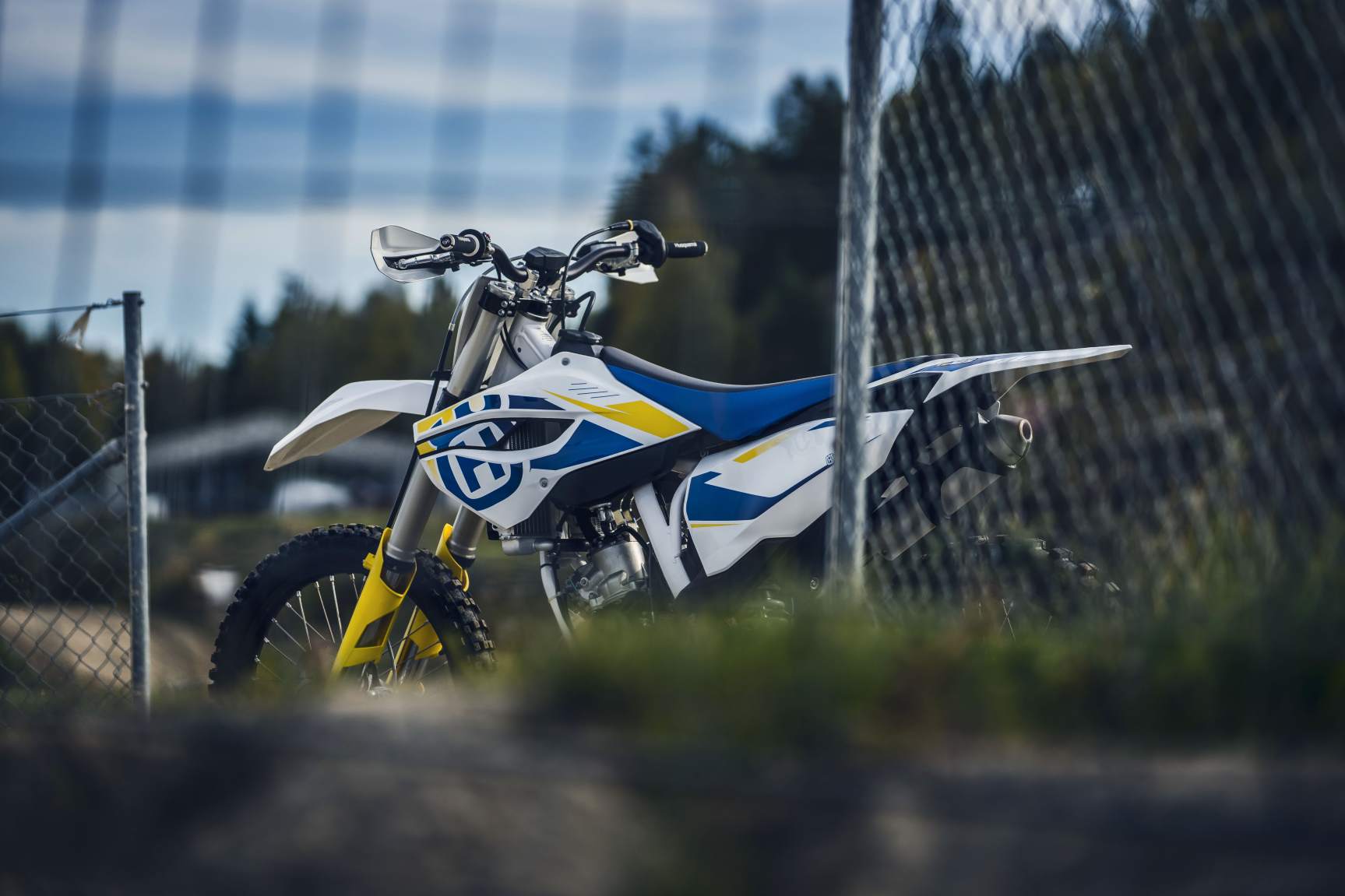 Your job must involve a constant degree of feedback. Are the good responses the main source of good job satisfaction for you?
“I think things have changed a lot in the last five to ten years. The first street bikes that came out for us, going back to things like the 950 ADVENTURE in 2003 and the SUPER DUKE in 2005, we were sure they were pretty good motorcycles…but they were also quite ‘special’. They were ‘READY TO RACE’ and quite particular and appealed to a certain quantity of people. What we have done over the last ten years is continue that ‘READY TO RACE’ philosophy but also made the bikes more comfortable, practical and appealing to a wider range of customers. As you can see on the new SUPER DUKE with the specs – it is a 1300 with 180 horses – it looks like a brutal machine but you can really use it as a daily motorcycle, to get to work say. We’ve tried to make the range as accessible as possible. If you want ‘The Beast’ then you can switch everything off and enjoy it another way.”

“What we have done over the last ten years is continue that ‘READY TO RACE’ philosophy but also made the bikes more comfortable, practical and appealing to a wider range of customers.”

But have you fed off that positive reception to your work?
“For sure. We are sure we are building good bikes but the bigger attraction is there and the positive reaction from the journalists – who are the first to ride them – is indicative of that. In the past there were journalists who loved the special character of street KTMs but then there was also a group that didn’t because they saw them as too aggressive and too edgy. Now the balance of the motorcycle means it suits beginners to experts. It is complicated to make these versatile products but that is our job in R&D.” 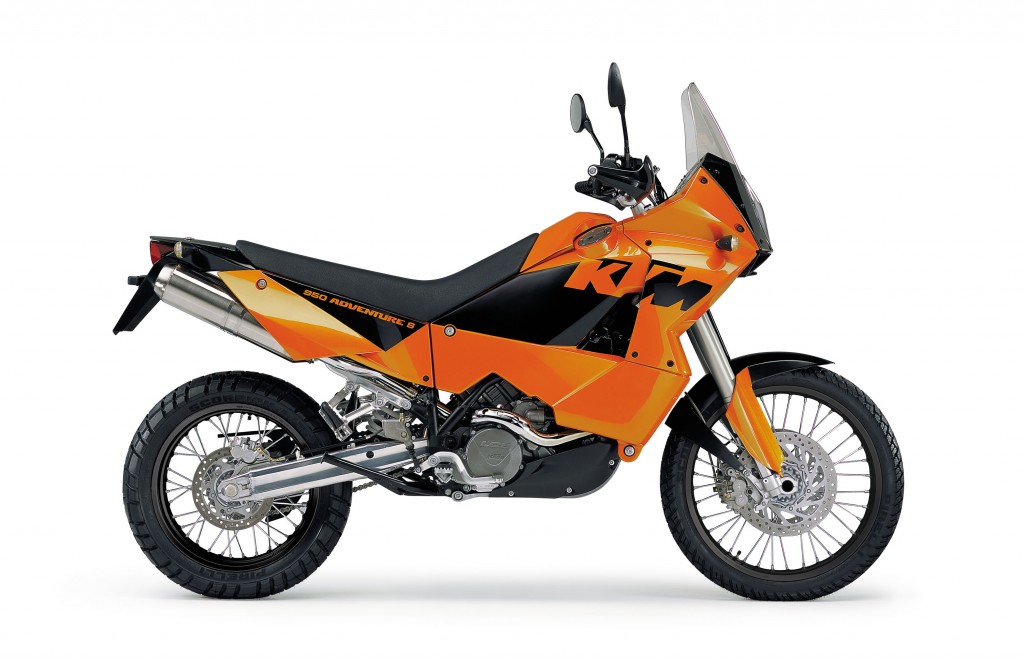 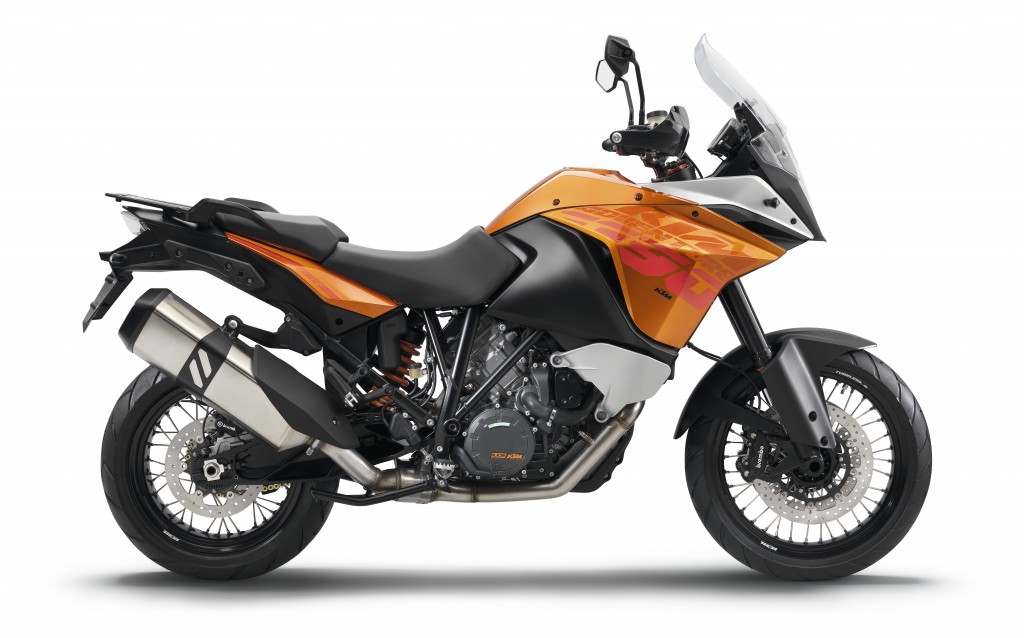 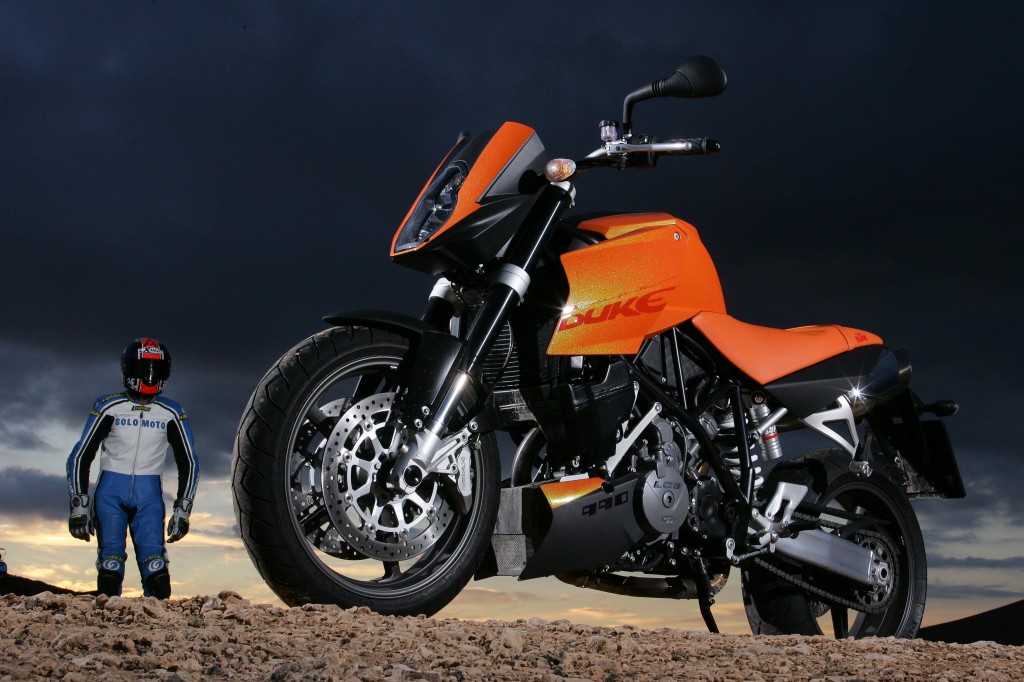 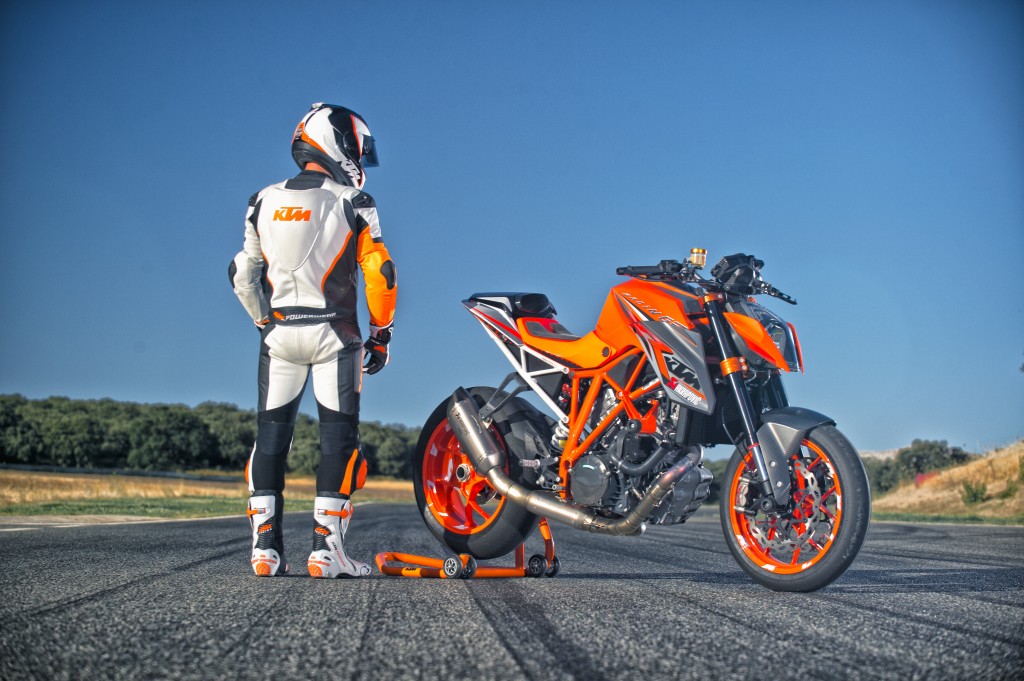 Has your job evolved much over the past twelve months because of projects on the table?
“Monday to Friday is a big challenge from early in the morning to late in the evening! My role hasn’t changed that much in the last year. For sure it was a big thing to integrate the Husqvarna R&D and then the final steps to finalise the last of our street motorcycles to be ready for the market on time.”

How is your professional lifestyle? An endless series of meetings and decisions?
“I’m very often on trips around the world, visiting key or strategic suppliers or looking for new ones. I am often with our Indian partners and that is also a lot of work for me to find the right way to do things. The Indian way to work is different to the European; it is very ‘from the top down’ and you need to find solutions at the top level. The partnership is a very good one and it is a pleasure for us to work with Bajaj. Sometimes I actually ride motorcycles! We have a few milestones we want to hit and I am part of the group testing to see if we have hit any of our objectives. We want to make sure that our motorcycles in the end are real KTMs. This is one of our key plus points; that everyone in R&D rides motorcycles and wants to be on two wheels. The 1290 SUPER DUKE for sure is one motorcycle that will be in my garage next year.”

“This is one of our key plus points; that everyone in R&D rides motorcycles and wants to be on two wheels. The 1290 SUPER DUKE for sure is one motorcycle that will be in my garage next year.” 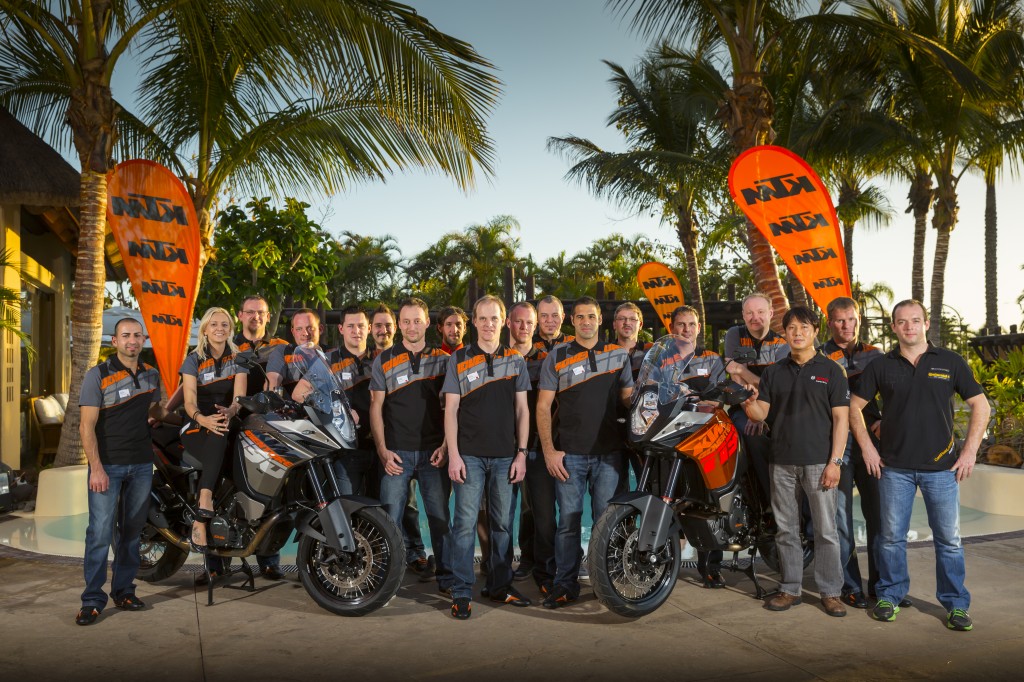 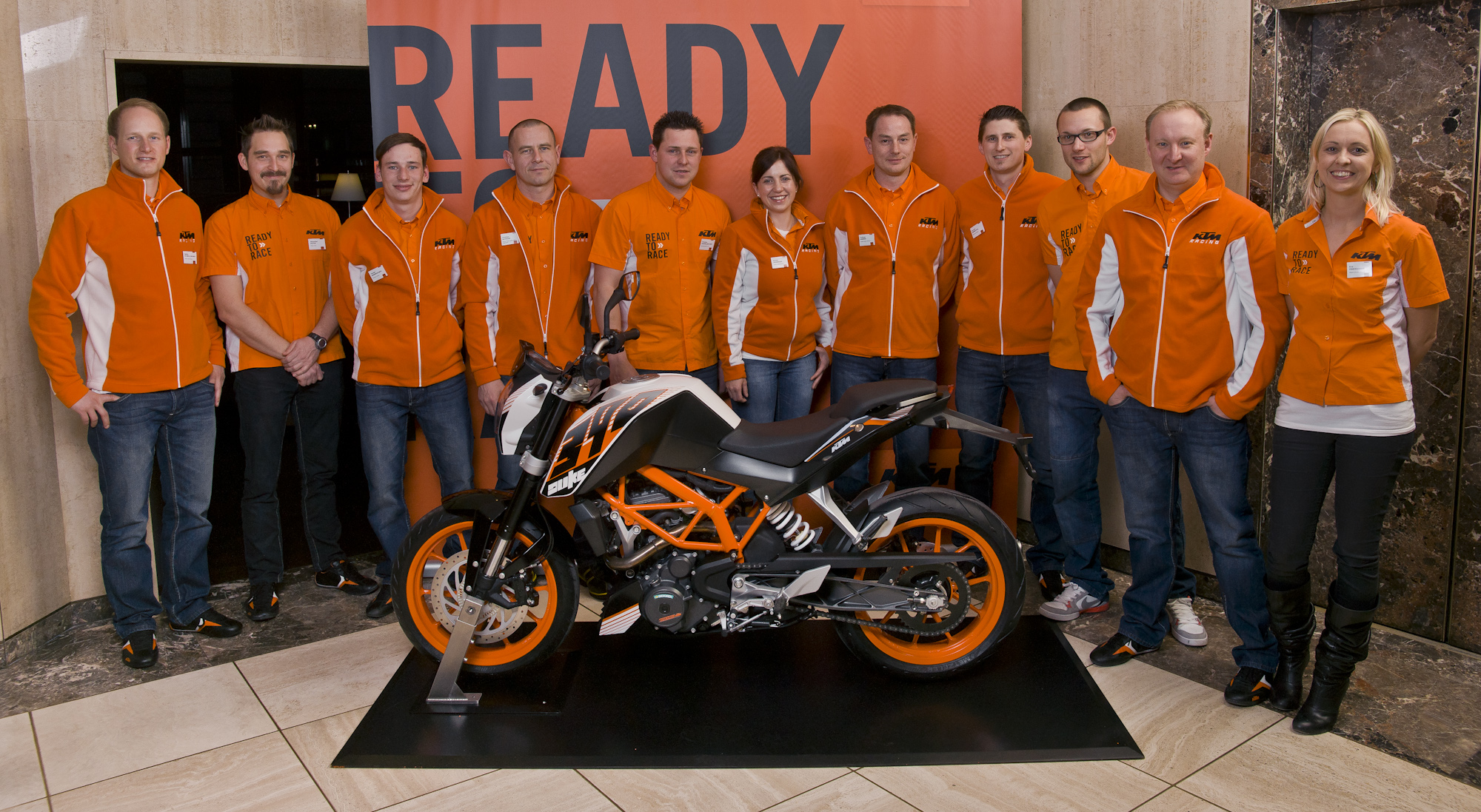 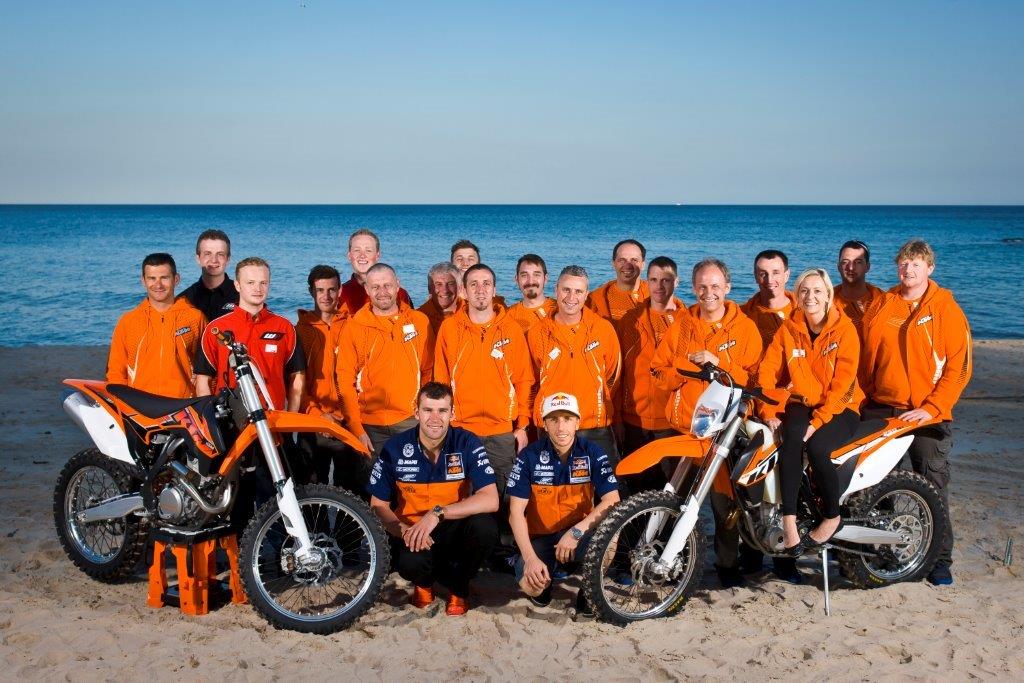 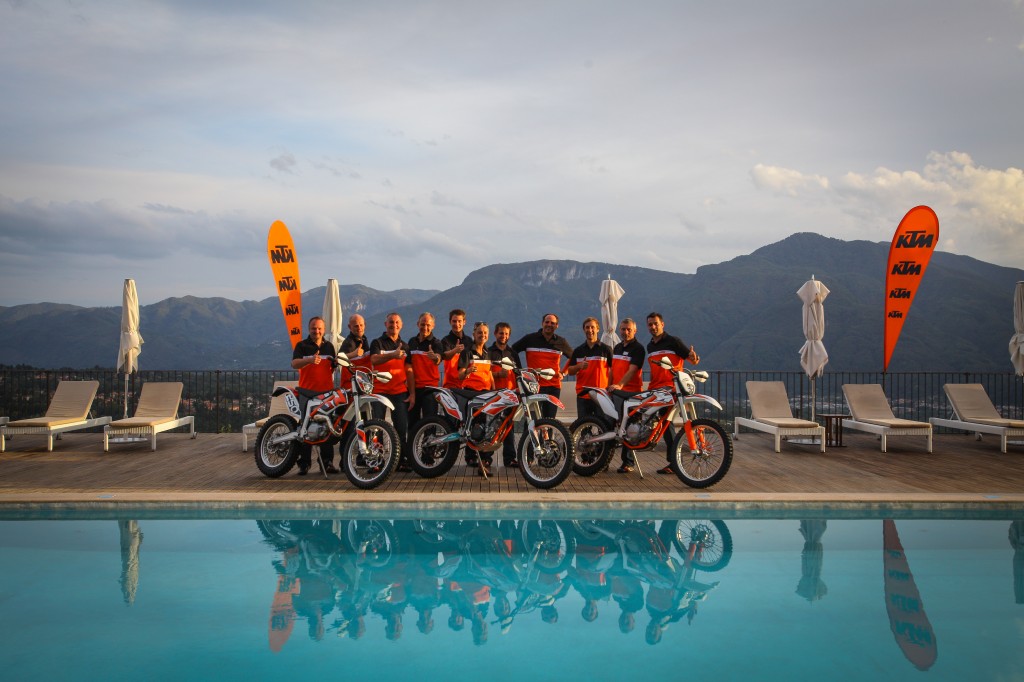 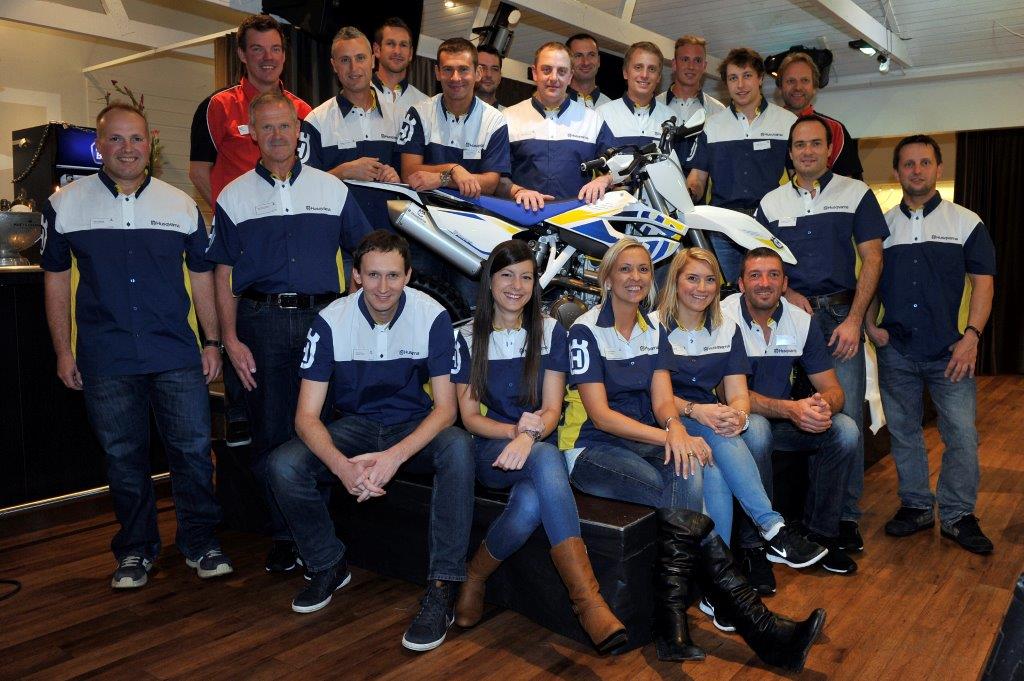 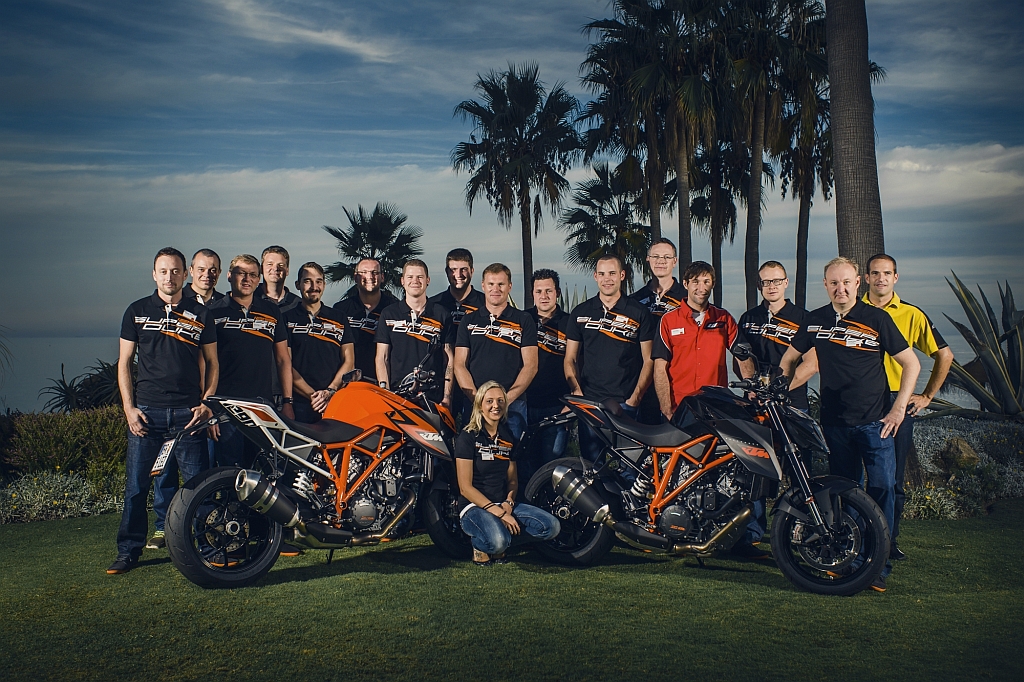 161 Responses to Interview of the month: Re(ar)view with Philipp Habsburg, Head of KTM R&D