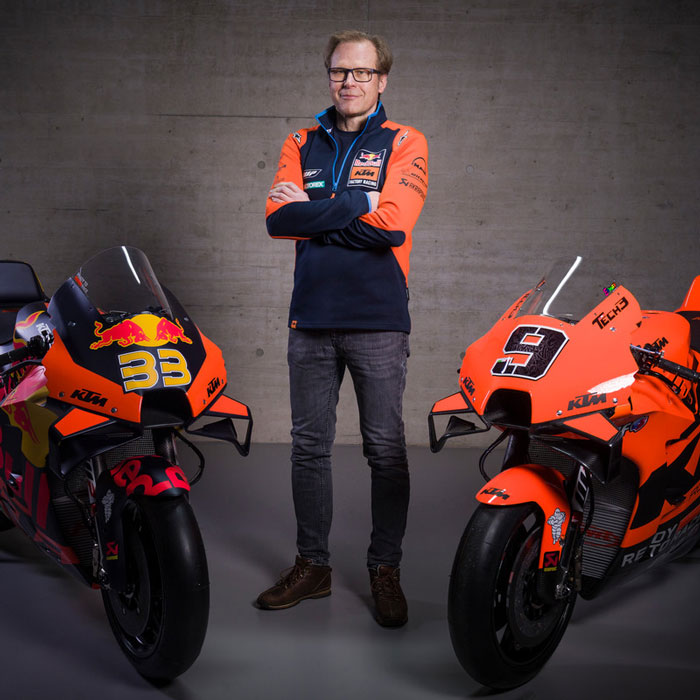 ONE STEP BEYOND: MEETING THE MAN WHO HELPED ACCELERATE THE KTM RC16 TO THE FRONT OF THE MOTOGP GRID

“I’m part of the inventory,” Wolfgang Felber smiles from behind his glasses. The 58-year old is sitting – socially-distanced – in the dark reception area of KTM’s Motorsport building in Munderfing and is being quizzed about his role in the rapid evolution of the KTM RC16; from MotoGP newboys and learners to Grand Prix winners and front runners.

The former racer’s fingerprints have been over a large slice of KTM’s track efforts: from the first MotoGP V4 at the beginning of the century to the victorious Moto3 project, WP’s progression in offroad and Supercross and then the company’s current bustling Grand Prix tech. The KTM RC16 is a machine that went from being two seconds-a-lap adrift of the leaders to the peak of the MotoGP pack in just four seasons.

Felber has been in KTM for almost four decades. He is well placed to have seen the dynamism in Mattighofen since the turn of new millennium and how the distinctive orange livery became prominent in virtually every FIM motorcycling competition.

“Looking back, I could never have imagined how KTM in general would have developed over these years,” he admits, wistfully. “It is a massive difference. It is like jumping from stone age to modern times. The company rocketed from being a local brand of dirtbikes to a global player in the motorcycle business…” he pauses, “but I can honestly say that every single day of those 38 years was exciting, challenging and never boring. I love my job. It is my passion.”

What has been your role since you came back to the heart of the road racing project in the last two years?

Maybe I’m something of a counterpart to all the young engineers here that are much better educated than me, but sometimes you need a guy with a bit of feeling, experience and who might think differently. Perhaps that has been my part in the game. I’m always happy when one of our new guys come along with a new idea. It means the level of the company is rising up and the younger generation also learn and develop their knowledge. I used to race, and this is a plus, even today when I cannot remember every detail of what I was doing on my bikes decades ago! I can still imagine what a rider needs and how the connection between a rider and the bike must be. It’s a philosophical approach.

What about your journey with the KTM RC16?

I was more of a specialist for the layout of the chassis but I can say from when I arrived [on the project] there were single components or areas – like the engine or the electronics – that were already with a very good base. It just didn’t fit together 100%. So, we had to meld a union and hone the package.

Dani brought his approach of how to ride a MotoGP bike over a full race distance or through a qualifying lap while bearing in mind the 20 different tracks and aspects like different temperatures. He had a general picture of what a MotoGP bike should be. First of all, it has to be good and reliable and a package with which the rider can be confident from Friday morning. Time on a race weekend is very limited. You have the four Free Practice sessions then Q1 and Q2, warm-up and into the race. There is not much time to work on the set-up. If you are ‘off’ on Friday morning then you will suffer all weekend. Dani has this picture, and every modification we test with him, every part, every strategy he keeps this in mind. He doesn’t think only about the next race, he is looking for the next years.

Yeah, that was a big target. Also, another one was to make the bike competitive for all our riders. Until 2019 it was obvious that the bike was very much designed for the needs of Pol Espargaro and the others struggled a bit. Now it is designed more to Dani Pedrosa’s way of thinking and it’s astonishing that also Pol, Brad and Miguel and Iker could all embrace it. We have a very good package now for the riders because their styles are every different. It is a big plus.

How difficult was it to make a big change on the chassis but also keep the KTM DNA?

We didn’t think about the KTM DNA that much. We wanted to make the fastest, most competitive bike. A bike to win. This is automatically the KTM DNA.

So, you didn’t have to keep a strict principal with the frame?

The strict principle was to make it from steel, and we are using the newest technology available with this material. Additive manufacturing: the more common term is ‘printing’ steel. The main parts of the frame are printed and welded together. 70-80% of the parts are printed and this gives us a lot of freedom with wall thicknesses and stiffness variations. It’s a big advantage. The philosophy for this chassis – and all the bike – was to deliver more confidence to the rider. A good example for me was the final race in Portimao and the Q2 qualifying laps of Miguel and Pol. The last corner is that fast downhill right hander and both were totally on the limit with their fast laps. The bike was sliding on the front and the rear with about 60-degree lean angle and around 200kmph and you could see the confidence they had: this is the package of rider and bike working fast together. If you can create it then it’s a great thing.

What’s your emotion when you see something like Miguel and Pol fighting on the last corner for a MotoGP win?

Not just for me but for all the people involved in the in-house development here in Munderfing it was a special feeling because we are all racers to a degree. Even if the guys are sitting in front of their TV watching the GP in their mind they are also on the bike together with the rider because they have built and developed the motorcycle. They all have their connection to what is going on.

Lastly, the KTM RC16 seemed to make a big step in 2020. Is there another sizeable gain still to come in the 2022 model? Or is it about small tweaks from here?

I believe it will be small tweaks from now on because we have reached a good level. It’s different compared to when the project started four years ago and the bike was 2-3 three seconds off. When you start from scratch then you are ‘nowhere’, that’s normal, and you can quickly make big steps to get closer. Now we are in the ballpark and it is very difficult to find improvements. When we are testing we’re happy if we find something which makes the bike five-hundredths of a second faster and it is difficult to identify if it is an improvement or not, even with all the data. You always have the tires and their rate of drop also, so it is hard to judge. The next KTM RC16 also has to be a better bike to ‘fight’. This is also KTM’s DNA because we know motorsports and have been racing for so long. We know from other categories how important this is.

2 Responses to ONE STEP BEYOND: MEETING THE MAN WHO HELPED ACCELERATE THE KTM RC16 TO THE FRONT OF THE MOTOGP GRID