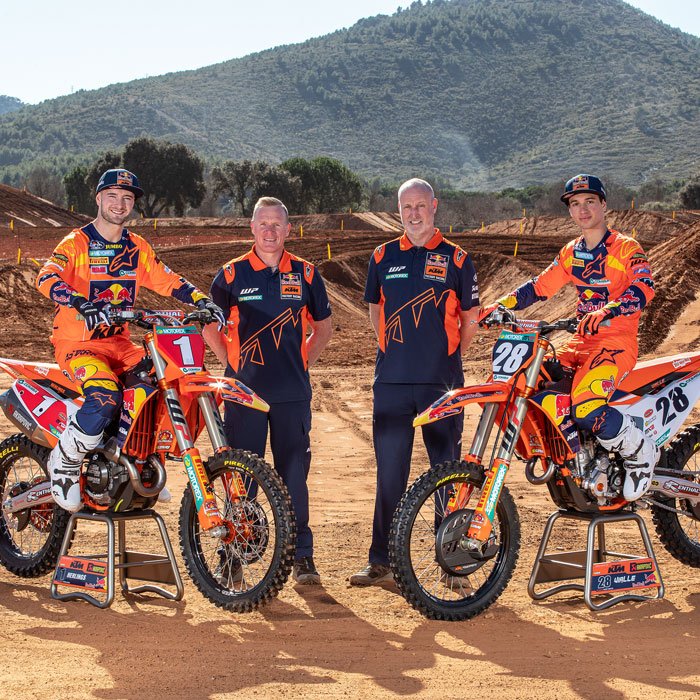 PRESERVING THE STATUS: 3 QUESTIONS ABOUT 2022 RED BULL KTM IN MXGP

The most successful race team in the modern era of MXGP heads into a new phase for the soon-to-launch 2022 season. Technical Director Dirk Gruebel answers several key questions as the 66th FIM Grand Prix campaign looms.

Exciting transition. This is the situ for the all-conquering Red Bull KTM team in motocross Grand Prix racing in 2022. The crew won premier class championships from 2010-2014, 2017 and 2018 and 2021. They ruled the MX2 category with an iron fist from the inception of the division in 2004 with titles in all but five seasons with the KTM 250 SX-F.

KTM 450 SX-F and KTM 250 SX-F machinery have become the reference in motocross competition since the beginning of the last decade and 2022 brings a promising new chapter of technology with a variation on the frame concept and a rasping new four-stroke motor. For the KTM 450 SX-F this is a significant shift as the last generation from 2015 was highly prolific in both MXGP and AMA Supercross.

In terms of roster, Red Bull KTM fielded the most decorated MXGP line-up in the history of the sport in 2020 and 2021 with Tony Cairoli, Jeffrey Herlings and Jorge Prado all bringing a total of 15 world titles to the same orange awning. Cairoli opted for retirement at the end of last season with statistics that mark him as the second-best of all-time and Prado moved to other pastures. Herlings was the premier MXGP runner, aiming for his third FIM gold medal. 2020 MX2 world champion Tom Vialle – a rider who grasped 13 victories in ’20 and 2021 and enters his fourth term in Grand Prix and with KTM – is his teammate.

Red Bull KTM were devasted by the tragic death of 19-year-old Rene Hofer in December: the Austrian had won his first Grand Prix in 2021 and was on the precipice of a sterling career in the sport. More difficulty emerged on the last day of January 2022 as Herlings suffered a broken left heel in a freak crash. The injury required surgery and pushed Vialle to the fore as the brand’s main outlet for the opening of the world championship in the UK on February 20th (now postponed by one week until February 27).

Despite the adversity the orange bikes will still be the ones to catch in both categories throughout sections of 2022.

“Last year, standing outside the whole two-truck set-up with the two team components and the whole middle linking section…it looked impressive and I knew it would change at the end of 2021. I think our new structure also looks impressive and people will see it once we start the GPs. Our tent is still big and prominent enough! The last four months from the end of last season have been a real rollercoaster. But life goes on and you need to motivate yourself if you want to stay in this sport and be successful. We need to take the positives from all around us as well as any kind of positive energy from what we’ve all been through.”

“We had a small break for winter and then came to Spain for some more tests and I’m positively surprised. We are really on a good way. Both riders have been happy. Of course, there is always something to improve, and we have minor adjustments to make but seeing Tom pushing the KTM 250 SX-F and looking for speed I believe we are really in a good way. This is a completely new concept and we still need to learn about this motorcycle, even if it has been informed by all our learnings and success with the older bike. It is an ongoing process also for the riders. With the other bikes we had little updates for several years, mainly around the same engineering concept. Now we have a new one. It’s different…but from what I’ve seen is pretty good. We are learning all the time but the lap-times speak their own language. If the rider throws a leg over something new and is unsettled by it then you are in trouble. But everybody was happy. Now the process continues. We need to understand more and take out all the benefits. Details? The whole layout of the frame has changed from before. The whole rear end geometry with the linkage, swing arm, shock and so on. It’s all different. The ergonomics also. The bike is very symmetric and slim. The movement of the rider and the space on the bike was all taken into consideration. Five months on I’m happy with where we are with the race machines and our cycle with feeding information into production has been like normal.”

3. On Jeffrey and Tom’s prospects, futures and expectations for 2022…

“Jeffrey’s injury is a tough situation for all of us. He had come from such a ‘high’ of being world champion again. It’s been difficult to manage…and for us again because the impact of Rene’s death was so hard for all of us in December. One team member gets ripped out of your structure. He was a great kid, and potentially a future world champion because he was developing fast. Jeffrey will recover and is on the mend, but we don’t know when he can return to the series. If races are postponed or moved then any delay would favour him, so there are many question marks. Tom is a top rider and going for the MX2 title again. With Tom we talked and decided it would be better to have another year in MX2 as a title contender and then moving up to MXGP hopefully as world champion again in 2023. We all felt he would profit from more physical development for the bigger bike and would gain a confidence boost. Everybody is looking to MXGP but we can’t forget that Tom doesn’t have too many GP seasons under his belt yet and moving this year might have been a bit too early. I think it was a wise decision. He’s on a good bike, he’s a good guy and a great rider. We’ll see by mid-season where he will go. In terms of 2022: we always aim for championships, that’s clear. Racing is still good fun. We have a solid structure and a good team atmosphere but, of course, the main target is still to win titles.”

13 Responses to PRESERVING THE STATUS: 3 QUESTIONS ABOUT 2022 RED BULL KTM IN MXGP