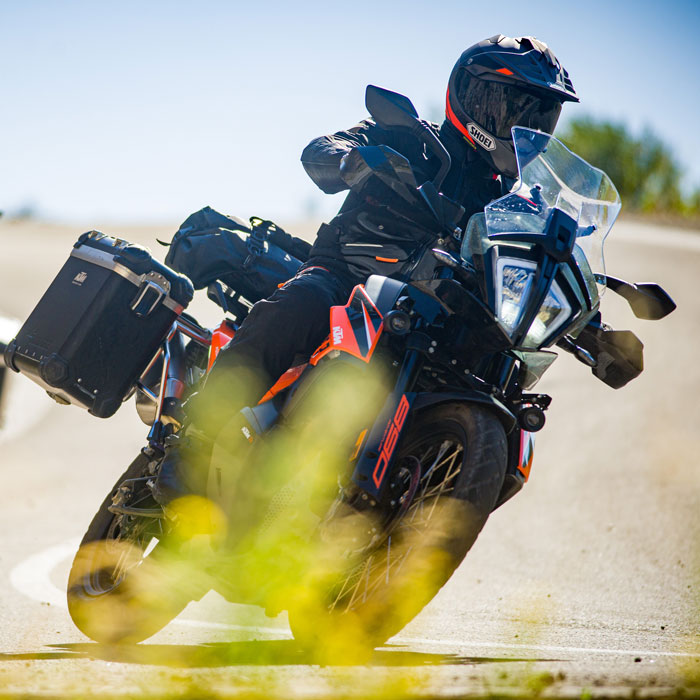 From the mountains of Greece to the Italian Alps and across the borders to Austria, and most recently the east coast of Australia, here’s what I’ve learned after 30,000 km on the latest generation KTM 890 ADVENTURE.

Over the last six years, I’ve ridden over 200,000 km with my good-old KTM 1190 ADVENTURE. We really had all sorts of adventures together across more than 45 countries and I never thought I would find a valuable substitute for such a reliable machine.

A little bit over a year ago, I got asked to attend the international launch of the all-new KTM 890 ADVENTURE and that was the start of a cool adventure. Picking up a brand-new bike from the home of KTM in Austria, I got to ride it across Italy and over to Greece. On that same bike, I got to spend the months to come testing it in all kinds of conditions.

Moving over to Sydney, Australia late last year, I found myself aboard another KTM 890 ADVENTURE for 2022. All in all so far, I’ve completed over 30,000 km on KTM’s mid-weight offroad traveler.

Maneuverability is probably the single most important feature that the new KTM 890 ADVENTURE has compared to the older KTM ADVENTURE bikes. The overall bulkiness has been significantly reduced, prioritizing weight distribution. There is no doubt that having most of the weight of the motorcycle sitting below the rider seat, increases the overall stability and enhances the riding experience.

This new design can be found in rally bikes and it has been massively important to maintain the bike stable at high speeds. In particular, I loved how light and maneuverable the KTM 890 ADVENTURE really feels, compared to the 1190 ADVENTURE, while riding in the city and on narrow mountain roads. The bike feels really agile, stable, and much more manageable in terms of power, compared to the previous models.

I remember struggling in many situations with my 1190, especially while riding offroad. On many occasions, I had to “man-handle” the machine to get myself out of certain tricky spots. Like that time I got stuck on a pebbly beach in Paracas National Park, Peru. The bike sank right where the shore-break was. The tide was coming up and I had only a short window of time to pull the bike out of there.

I had to roll the bike from one side to the other several times to get the rear wheel out of that sinkhole! And having my 1190 ADVENTURE weighing over 240kg, with a tank full of fuel, it was definitely quite a workout. With the KTM 890 ADVENTURE I got stuck on a beach in Crete, Greece and it was surely less of a burden to get the bike back on track.

In my opinion, the parallel twin of the KTM 890 ADVENTURE is probably the best available engine out there, in the mid-sized category. Strong, torquey, and smooth at low revs. The four ride modes available (with the optional RALLY MODE) allow the rider to choose how much power is needed for each riding condition and terrain.

105 hp and 95 Nm peak torque are plenty, even for people like me, which were coming from the old school 150 hp LC8 engine. Matter of fact, I was a bit skeptical to step down to a less powerful machine in the beginning. The reality is that reducing engine displacement is a substantial change… for the better! The old LC8 was a good engine, and It shined above 5,000 rpm.

The new parallel twin has instead a more comprehensive delivery across all RPMs, making it easier to handle, especially while riding offroad. On this new engine, power gets distributed more evenly and it makes the KTM 890 ADVENTURE an overall smoother machine to ride in all situations. The bigger and more powerful 1190 engine was better for those long day riding, but somehow this more complete motor fitted on the 890, has indeed more applications and chances to be used for all types of rides.

I surely appreciated the 1190 engine while climbing the Andes or the Rocky Mountains , riding fully loaded. But the 890 engine has been powerful enough to carry me and my luggage up on the twisty roads of the Italian Alps and the rough Greek mountain tracks.

Got to love new tech

As this is certainly one of my favorite aspects of modern motorcycles, I was happy to find much more refined electronics on the KTM 890 ADVENTURE than my old companion. For example, I immediately appreciated the capability to switch ABS to offroad on the fly, the presence of the optional cruise control and Quickshifter+ functionalities, together with the additional slip control that comes with the new RALLY MODE.

I recall a couple of times in Brazil when I got stuck in deep sand, having the MTC set to off on my KTM 1190 ADVENTURE, which did not help unfortunately in digging myself out. On the KTM 890 ADVENTURE instead, the slip control allows you to adjust how much spinning you want on the rear tire. Traction control does help, especially on soft or slippery terrains. It is counterproductive to have the rear wheel spinning out of control and just digging into the sand or dirt.

There was another instance, during the recent ADVENTURE RALLY in Greece, where a steep hill covered in loose gravels and big rocks, challenged a lot of “old schoolers” with older models without the rear wheel spin adjuster on their bikes. All the new bikes instead had no problem in climbing that hill, setting their SC from 5 to 7 (the range is from 1 to 9) and letting technology take care of the traction while climbing.

It’s all in the details

On my old KTM 1190 ADVENTURE I had electronic WP Suspension, while on the KTM 890 ADVENTURE I had the new WP APEX manually adjustable ones. I kind of abused those shocks on my 1190, since I rode for over 190,000 km most of the time fully loaded, in rough roads, heat and cold. I cannot complain about those, at all. The new WP APEX with adjustable preload and rebound of my KTM 890 ADVENTURE have been good to take me through one ADVENTURE RALLY and plenty of offroad days in the Greek mountains.

They had a great response while riding offroad and I also enjoyed their performances while riding on tarmac. Considering that I am not a pro rider and that I do not jump off three-meter boulders like Chris Birch, I think the WP APEX are more than capable to take me around the world.

If this bike was available back in 2015 when I started traveling around the world, I would have certainly chosen it for my adventures. It’s lighter, better at low revs, easier to maneuver, and way more efficient on fuel consumption. 105 hp are plenty to enjoy the pleasure of riding, even when fully loaded.

Although it was a pleasure to ride my 1190 across half of this planet, I must recognize the advancements in technology that have been implemented in the new models. The much more rounded engine of the 890, in combination with refined Quickshifter+, cruise control, and spin adjuster, make this bike more pleasant to ride.

Finally, the significant weight reduction on the KTM 890 ADVENTURE will allow you to enjoy the overall daily riding experience a bit more. All in all, it’s easier to handle this machine while exploring the mountain roads or cruising on offroad trails.