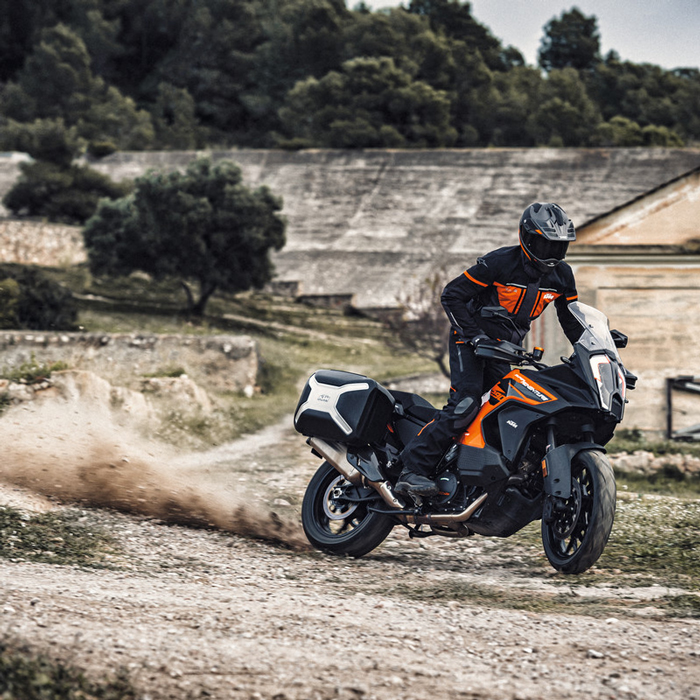 THE TAO OF THE S

What to know and what you need to know about KTM’s latest ‘statement’ for Adventure bikes: the KTM 1290 SUPER ADVENTURE S.

To best dissect the new KTM 1290 SUPER ADVENTURE S we spoke with Head of KTM Product Management Adriaan Sinke to delve into the spirit and technical acumen reached by the latest motorcycling flagship in the KTM range. Read on for some of the keen questions, issues and assets surrounding the bike…

AS: Well, I think a GT rider is essentially a KTM 1290 SUPER DUKE R rider. They might have a different type of personality, different goals, different idea of what motorcycling is but with the aspiration to make long trips. While in our Adventure world the KTM 1290 SUPER ADVENTURE S is for riders who are mainly on the street and will occasionally find a dirt road, but they don’t have ambitions to go further offroad. They want the riding position, the comfort, and the ability to do a couple of hundred kilometers on a dirt track: that’s not a problem, while on the GT that isn’t really possible. The GT is still a bike to get your knee down. It’s a Gran Turismo. A very fast Alpine tourer. I see the ‘S’ reaching far more corners of the world, and before you need a KTM 1290 SUPER ADVENTURE R to go even further.

AS: The big adventure segment is clearly booming. There is a big market there, specifically in Europe. I think the demographics [of the riders] help a lot. They are typically moving away from Supersport and other types of bikes in search of a different experience. The adventure segment combines everything that used to be sports touring on the tarmac – which is a category that has become very small and with the GT we are one of the few that still have a dedicated sport touring bike – and a lot have moved into adventure riding. In terms of reacting to the pandemic we’ve always promoted the adventure lifestyle and we live it; whether that’s with the KTM 1290 SUPER ADVENTURE S or one of the R models. The situation hasn’t changed much for us. We are happy to see that sales are continuing and that people – maybe more than in the past – are starting to consider motorcycles as a form of transport because they don’t want to use public transportation. Adventure riding is an easy way to escape everyday life. Maybe people are looking at motorcycling again after all the restrictions.

Should new riders curious about adventure bikes be worried about the size and bulk of the machinery?

AS: Comfort was one of the key topics for this bike. We have always wanted the rider to have as much contact with the motorcycle and the road as possible, so you always know what is happening. You have that sense of full control. In the past, with some other models, it meant we sometimes had to compromise comfort a little bit because we believe that performance is key. With this bike we went the extra mile to combine the two, to give you those contact surfaces, the seat, the fairing and to give more confidence by it being a bit lower, a bit more narrow in the middle, you sit closer to the bars and it’s balanced differently to make it easier to handle without losing any of the sportiness.

Adaptive Cruise Control and letting something else control the throttle: to some it’s the opposite of what biking is about…

AS: Well, in the real world – unlike in our advertising – I have to actually get to the mountain! I wish the whole world existed around super-tight twisty mountain passes but it’s not true. The huge advantage of adaptive cruise control is that it makes getting there much easier and fun and then when you arrive to those twisty parts you switch it off and enjoy that amazing Adventure bike. It’s very complicated technology. In a car it is relatively easy because the vehicle is stable and doesn’t lean. When the wheels turn you know in which direction the car is travelling. Lean angle doesn’t necessarily indicate this. It’s more complex. Motorcyclists ride differently, you are not always directly following the rider in front of you. You can be staggered. If a car system brakes aggressively then it is still going in the same direction whereas a bike has more at play so factors like how much you can accelerate and decelerate and how aggressively you can react means it’s difficult to achieve. A lot of working has gone into the settings to make it where it is today. It is a big project. The best thing about it is that it’s not a gimmick. It actually makes the bike better. It’s a more fun travel motorcycle. You can skip the boring parts.

Together with WP, KTM have made the latest version of semi-active suspension. Talk about this…

AS: The suspension has really evolved since we had the first T model Adventure bikes. The last generation of semi-active was really good. One of the big differences now is that we are using different valves, and these are less complex. It is our own technology and it is something we developed in-house with WP. They react faster and are not as sensitive to tolerances of production. I wouldn’t say they are easier to set up, but they are more consistent in performance from one bike to the next. It helps us a lot because it means you can be very precise in the set-up of the various modes because you know the system has a smaller window of tolerances. The fact that we now have the 6D lean angle sensor and the digital sensor on the fork and swing arm make the data acquisition easier, faster, and cleaner. A lot of work has gone into the system itself. We have taken everything we have learned and applied it to the system of this bike.

With the various damping, preload and ‘mode’ options you can pretty much mould the KTM 1290 SUPER ADVENTURE S as you want it…

AS: Yes, it’s very versatile. A massive advantage to the semi-active suspension is that you can set the bike to be very sporty if you want to ride it hard or to be very comfortable if you don’t; and then everything in the middle! You can pretty much have two different and extreme types of riding behaviour whereas if you only have conventional suspension then you can make it very comfortable or very sporty but not both. Even if you were to make those set-ups manually you still won’t have the spread of adjustment with the conventional system because you’d actually have to open the suspension.

While the semi-active seems very techie and complex, the new ‘iPad-ish’ TFT display makes it very easy thanks to the new menu ‘graphics’. It’s an interesting contrast: some highly advanced kit but operated with simplicity…

AS: One thing that we always like to remember is that it’s still a motorcycle. It should still be fun and exciting. Semi-active suspension could feel very remote and distance the rider from the feeling of the road so we try to give people this proximity and the sensation of interaction with the street: for us this is the absolute key to the whole thing. It should not be about having to set your clickers – even though with the ‘advanced’ mode you actually can change the damping now – but making it accessible, making it easy and fun. The illustrations and graphics we have on the TFT really helped us. It’s a good combination.

Weight. It’s always a factor with Adventure bikes. The LC8 is now also Euro5 compatible and has a new cooling system. How tough is the fight to add (or innovate) more but keep the kilo count down?

AS: Very! It’s always a hunt for grams. For everything you win on one part of the bike you then have to compensate for something on the other side. You win some and lose some. We literally looked at every single component of the bike for weight control. We did not try to make it much lighter because it doesn’t have to be: it is super-well balanced. Lighter is always good but the key to this bike was to achieve the behaviour characteristics it has. Maybe chasing the achievement of being the ‘lightest motorcycle’ becomes an issue but at the moment it’s not something that these big bikes are about. Less weight costs money and development time. It means complex engineering, construction methods and materials, and sacrificing comfort in some cases. Making things light means minimalizing. We did that as much as physically possible without sacrificing our design goals for the bike.

KTM are using more and more 3D printing methods for prototype and bike production. Was that technique used in development of the KTM 1290 SUPER ADVENTURE S?

AS: I would not be surprised if perhaps every single component has been 3D printed at some point. There are guys walking around the factory with 3D printed parts all the time. Designers have large 3D printers running 24hrs a day. We used to have one in R&D and now there are a few. The joke in R&D is that everything fits when it’s drawn on the computer! You have this little dark mark that shows when some parts are overlapping. But to then actually print it and apply it to a prototype bike? Well, this is where our mechanics come in. The engineer can design a part but then it’s the mechanic who has been working on adventure bikes for two decades who will then give feedback on its usefulness and whether it will fit, work, can be properly mounted or installed. Our production guys will come in and then say: ‘this won’t work in production’. I do think 3D printing is allowing a lot more possibilities though. It used to be called ‘rapid prototyping’ and that’s what it is: you can simply make a prototype. We do it with the screens. We design, print, put them on the bike and ride them. We’ll come back in, make a change, print another one and go back out on the bike until it’s right.

Get the complete insight by watching the video below:

5 Responses to THE TAO OF THE S