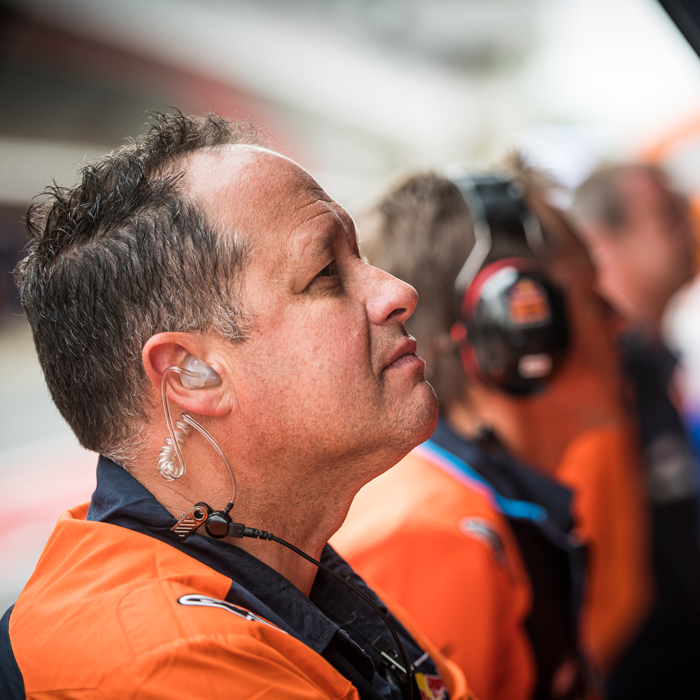 Crazy as it might sound, the last MotoGP™ weekend before the summer break, which is at Assen, was actually a home race for New Zealander Paul Trevathan (52). In fact, Miguel Oliveira’s crew chief has lived on the other side of the world to his country of birth for many years, and now calls the Dutch town of Druten home. We interviewed him to find out more about how he ended up here and what he likes to get up to when he’s not on the circuit or at the airport.

Backpacking through Europe and ultimately ending up working in motorsports; that’s Paul Trevathan’s story in a nutshell. But, before we start, we need to turn back the clock half a century to a small village called Balclutha on New Zealand’s South Island where Paul was born. It was also the place where he discovered his love of motorsports, as it happens through a TV program. “A show about minibikes came on the TV and I was transfixed! After that, I kept badgering my parents to get me one.” He ultimately succeeded in his mission, but soon swapped the minibike for a motocross bike. Trevathan even reached the New Zealand championships, but gave up competing at the age of 20. He had come to an age where he wanted to broaden his horizons, quite literally. So, back in 1991, he bought a plane ticket and set off to discover Europe, together with his girlfriend at the time. “I had a great desire to leave the island” Paul confesses. “I kept thinking about all the things out there that I’d never seen. The time difference meant that life was happening everywhere else in the world just when I was fast asleep. The initial plan was to do a world tour, but it didn’t work out quite like that.”

After a short trip around the United States, the New Zealand couple reached Europe. On the advice of a Swiss friend, they decided to travel round by push bike. From Rome in Italy, they cycled to the Netherlands, with the Motocross of Nations in Valkenswaard as their ultimate aim. “I wanted to be there to support the New Zealand team. I knew the team members well, and they were shocked to see me at this event.” At the MX of Nations, Paul got into conversation with Graham Kent, a factory mechanic for KTM in the motocross world championship. “I had no intention whatsoever of coming to Europe to get involved with motorsports. I just wanted to enjoy my travels and see as much as I could, but he came up with the idea of earning some money over the winter period. Anyway, it couldn’t do any harm. Graham got some work for me with a Belgian motorsports business.” It was Paul’s intention just to work over the winter period, but before too long his world tour got put ‘on hold’.

Because the motorsports business had some accommodation behind the site where foreign competitors could stay, Trevathan got to meet a few more New Zealand riders. “That’s how, in 1994, I came to do my first full season in the World Championships, with Darryl King. The only thing is, there was a problem halfway through the season. King got an injury and had to take time out of riding competitively, and was then not in a position to pay me.”

As a result, Paul had to look for employment elsewhere and joined SPES Exhaust, where he did a lot of work on the dyno. It was here that he met Jan de Groot. “Jan was manager for the Kawasaki factory team and took me on as his very first employee. We succeeded in landing Kawasaki’s first world title in motocross, with Stefan Everts on the 250cc.” Trevathan felt at home in the motocross paddock, but nonetheless he eventually decided to move to MotoGP. “I knew Christophe Bourguignon (current crew chief for Alex Marquez) from motocross and he was working for WCM at the time. He asked me if I’d like to come along to a Grand Prix event.”

Not long after that the New Zealander found himself part of MotoGP. “Peter (Clifford, team owner of WCM) wanted to make me a crew chief straightaway, but I thought that was pushing it a bit far. I had no experience with road racing, so my preference was to stay in the background, at least to begin with.” As it was, it turned out completely differently and the first race weekend of 2004 he was right beside the rider all the way. Paul recalls his initial training as crew chief very clearly. “Chris Burns came in after a couple of laps and said that he was having problems with chatter and pumping. I had absolutely no idea what he meant, I’d never even heard of it. Fortunately, I knew a few people from Öhlins and after that session I went along to their service truck. They asked how it had gone, and I responded that there had been some problems with chatter and pumping. ‘Well Paul, everyone has problems with that’, they said. When I asked what it was precisely, they just fell about laughing. Luckily, after that, they did explain it to me.”

In the same period, 2005 to be precise, change was in the air in his personal life too. By then, Paul was married to his Dutch wife Nicole and they were expecting their first child. “I had landed on my feet in Europe, and had completely fallen in love with the continent. I loved the fact that there were so many different cultures, all within relatively close touching distance. This really felt like home for me, but this was not the case for my girlfriend at the time, who was also from New Zealand. Because of this, we eventually decided to go our separate ways and I built a life in the Netherlands.”

The arrival of their daughter Eva meant big changes, but Paul continued to work in the MotoGP paddock. After the WCM venture came to an end due to financial problems, he joined Öhlins. “My wife thinks the world of racing is crazy, but she has always supported me in what I’ve wanted to do. Anyway, I think it’s a good thing she’s not interested in motorbikes. It helps me keep my home and work life properly separate.” Nicole continued to work for four days a week after Eva was born, but that changed when three years later Niek came into the world. “That was quite a challenge”, explains Trevathan. “We were wondering how we were going to manage it all. Ultimately, Nicole decided to put her own career on hold to devote herself full-time to the children. My family is the most important thing in my life, that goes without saying. But, working in the MotoGP paddock undoubtedly demands a certain level of sacrifice. So, I am away from home for more than two hundred days a year, but I feel fortunate my wife is accepting this situation. She knows that I need this kind of stimulus in my work and my life. I wouldn’t be happy with a 9 to 5 job, something I also know from past experience.”

Paul alludes to 2016, the second season he was with KTM. In that year he was part of the test team involved in the preparations for KTM’s entry into the MotoGP. “I was spending a lot of time at the factory, and so I was away from home from Monday morning till Friday evening. It felt like a 9 to 5 job as far as I was concerned, and I didn’t enjoy that way of working. I was delighted when we actually got to compete in the MotoGP in 2017.” The fact that Trevathan joined the team with the Austrian manufacturer was far from a given either. He had been a permanent GP employee with Öhlins for many years by then. “I was really pleased to work with Öhlins till retirement, but then the opportunity to join KTM came along. Pit Beirer (KTM Motorsports Director) wanted me on board and we already knew one another well from motocross. Pit knew what he was getting with me as I had been his crew chief at one time in the distant past. In the end, it was something my wife said to me that finally decided it. She asked me whether there was still more I wanted to achieve in my life, or whether I was happy just to play it safe?”

Paul has been wearing the orange shirt of KTM for seven seasons now. After acting as chief mechanic for Pol Espargaró, Paul is now the top man for Miguel Oliveira. He saw his first MotoGP win as crew chief with the Portuguese racer in the saddle. Hopefully there will be many more to come, because the Kiwi feels right at home in the manufacturer’s orange livery. “Most employees of race teams are freelancers, but KTM takes a completely different approach. I really feel part of the family. They look after you properly, which means you can put all your energies into performing well in the hectic world of motorcycle racing. As far as that goes, I’ve always got a reason to smile. When I leave the house, I have a smile on my face because I’m off on a fun and interesting race weekend. When I leave the circuit, it’s my wife and children who make me smile on my return home.”

He is at home less than the average husband/father, but can Paul leave the MotoGP world behind when he’s in Druten? “Not really”, Trevathan confesses. “As crew chief, the job makes demands on you 24/7. Okay, so that might be exaggerating it a bit, but work is on your mind a lot. You’re always wondering what you could change and improve to get better results. Fortunately, I can work flexible hours if I’m at home. That way, I can really be there for my family. Now the kids are a bit older, it makes things easier too. Before that, I mostly used to do my work once they’d gone to bed.”

If Paul has a free weekend, he likes to watch his son Niek at football. He also makes time to watch his daughter Eva when she competes on her horse. “Horse riding is a shared passion for the female members of the household.” As well as essential ‘homework’ for KTM (such as meetings and writing up reports), he makes sure he takes time away from work, which he likes to spend cycling, playing squash, or cooking for the family. “But, in fact, my biggest interest is simply my family. I’m away from home a lot, so when I am at home I want some quality time with them.”