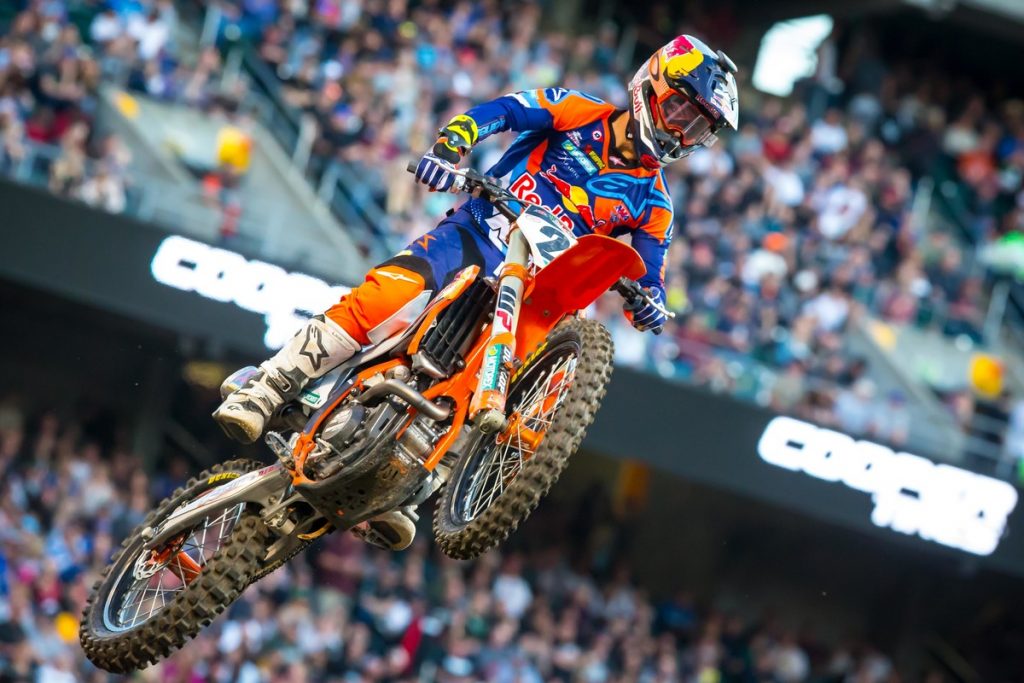 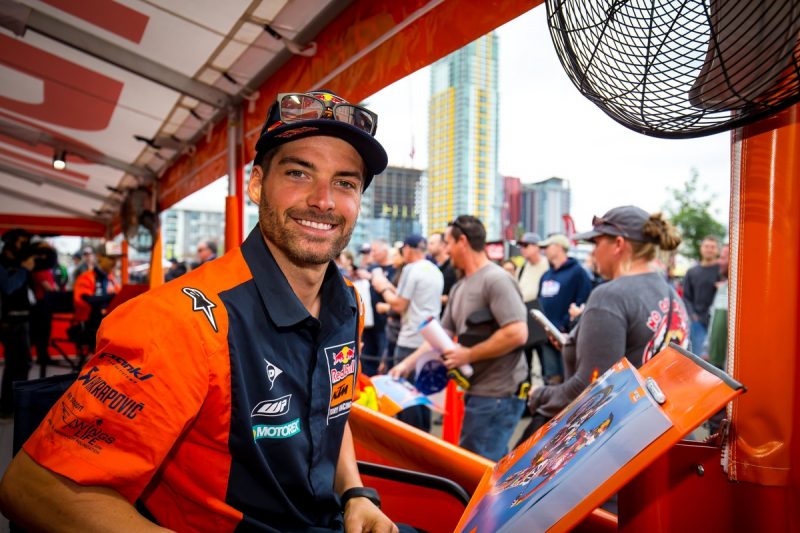 It is very easy to be awed by Supercross: the sense of occasion, the setting (inside Major League Baseball and NFL stadiums), the ‘showy’ aspect and the sheer number of spectators (averaging around 50,000 per Saturday evening and for the seventeen rounds run in nineteen weeks across the USA). However, it is on the tracks themselves that the magic really happens. Up close it is hard to believe that riders can achieve that speed, height and distance and defy physics in manipulation of their 450cc motorcycles. Add intense racing – where twenty athletes are separated by mere inches both on the ground and through the air – and it seems like a violent dance of glorious madness.

As reigning champions, Red Bull KTM Factory Racing are one of the principal ‘honey pots’ of the AMA paddock where the fans gather to eye the robust machinery as well as the refined individuals that need optimum physical and mental conditioning to attempt such a sport.

We asked 28-year-old Broc Tickle, a former 250 SX West Champion and now into his first term on the KTM 450 SX-F alongside Marvin Musquin to tell us about the three principle – and obvious – requirements that Supercross demands: technique, fitness and bravery. 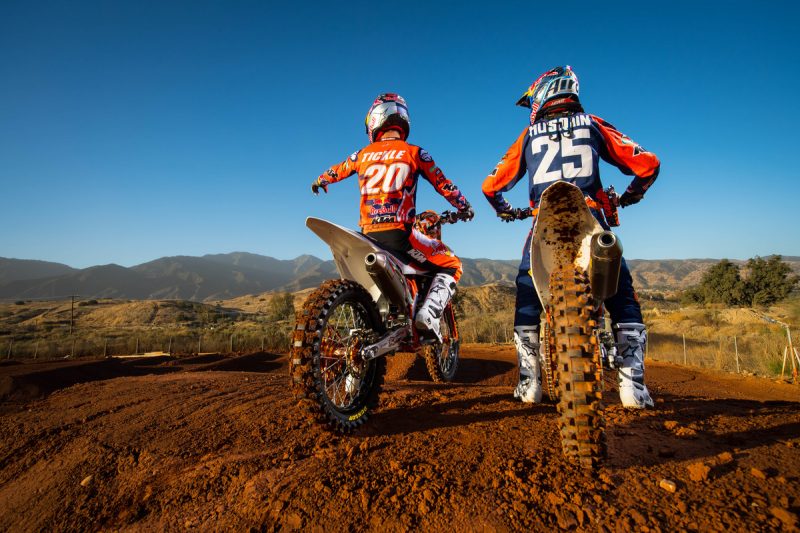 1. Making it happen
A Supercross layout appears to leave very little room for error. The rolling jumps, landings, rhythm sections, banked ‘switchbacks’ and whoops all seem like a recipe for disaster if the slightest misjudgement occurs. How exactly does a rider execute a rapid lap considering that the motorcycle is in the air for almost half of the time? At an even simpler level: how do they know the power and distance needed to make a jump?

“It is a feeling that you have to learn,” says Tickle. “Somebody that hasn’t ridden Supercross might think ‘you have to hit a triple fast …’ and the truth is that you don’t have to; most obstacles – especially on a 450 – are not very difficult. We could probably jump everything in first gear. Over time, you learn, and you get your feet wet with different bikes, especially if you have been doing it as long as I have! Trying Supercross for the first time with a 450 is probably not the best idea!” 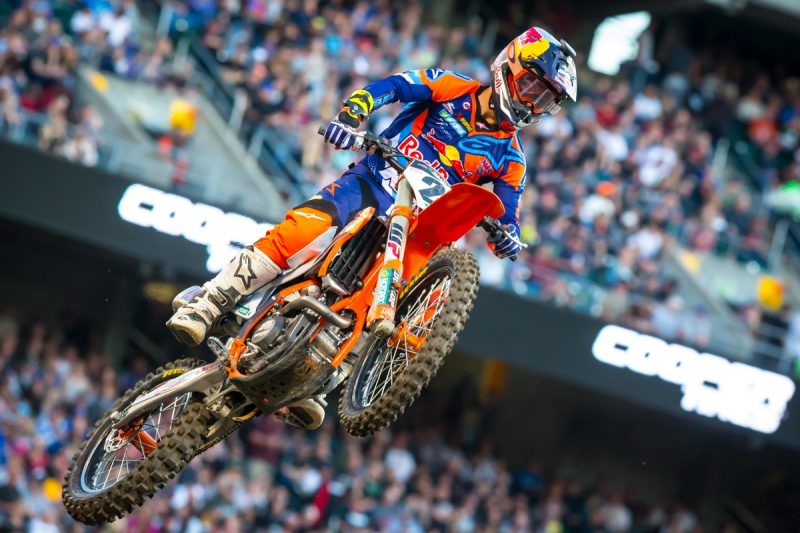 “I actually didn’t ride much Supercross or Arenacross before I turned pro so it was a big learning curve for me and I did it the hard way in the first few years. You see kids riding Supercross now with 80s [cc bikes]. Anyway, the main thing is timing, and not rushing it. On a 450 it is about carrying momentum and obviously the track is going to break down a lot for us during a Main Event, so bike setup and being clean with your jumps is important.”

“I feel like I have showed 80 % so far … and the first two races were my [personal] best to start a Supercross season. It has been great to work with this team.”

2. Being capable of making it happen
Thanks to informative systems like LitPro, Supercross audiences can now see the speeds and personal data of racers like heartrate. 450 SX Main Events might only last 20 minutes and 1 lap but it is not surprising to learn that athletes are running at almost ‘maximum’ in that time. At Anaheim 2 and round three of the 2018 campaign 250 SX rider Christian Craig was chartered at a staggering 200bpm while racing. As Tickle reveals, being in shape to complete a race is one thing but extra reserves are needed to push extra boundaries. Supreme fitness and condition is also essential for matters like injury prevention for those close-call ‘moments’.

“Supercross is more intense [than Motocross] and requires an extra focus to keep you at the point where you can push and not clip jumps, over-jump and make mistakes,” says the rider from North Carolina. “It all comes down to focus and if you lose that for a moment with the pace we are pushing now then it can lead to a ‘big one’.”

“Outdoors [Motocross] is about gritting-it-out whereas Supercross is about feeling and flow; it is twenty minutes plus a lap and I never really feel like I am too winded. When you don’t ride Supercross all summer and you go back to it then you’re like ‘whoah! What am I doing?!’ and you’re holding your breath in your whoops and rhythm sections: breathing is really important in Supercross and it doesn’t matter if you are just starting out or you have been doing it for a while.” 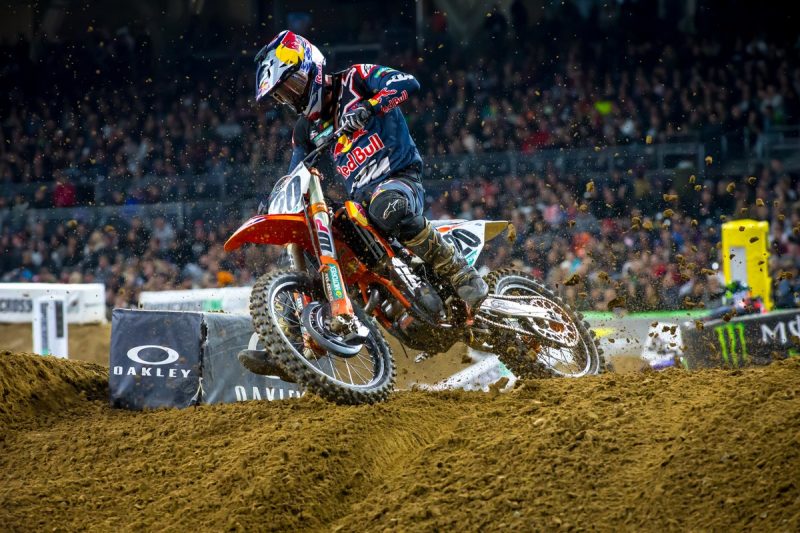 Offroad motorcycling tends to push and wear most of the muscles groups in the body. The rigors of Supercross with the take-offs, landings, impacts and scrapes mean it is all-embracing and all-punishing. “I kinda enjoy that ‘wore down’ feeling to be honest; I use it as extra motivation to push through and I’ve learned that from training with Aldon [Baker] and the guys,” Broc says. “Every time we hit the track then it is about [giving] ‘everything you have’, that’s the goal. Put in the time and do it right. In the past, I’d still do my motos at the track but almost go through the motions and taper it off. Going down there to Florida [Bakers Factory] … it was tough a few times because I wasn’t flowing, not clearing jumps, the dirt is sandy and choppy. I had a lot of tough days down there but it has built me into what I am now and I always gave 100 %.”

“I was 9th in practice at Anaheim 2 and I was just 0.7 off the lead time: it is close racing and the start is everything. There are so many experienced guys in this group that you have to make something ‘happen’.”

3. Wanting to make it happen
“This is my eleventh year [of Supercross] so I should be fine with it by now but the first time after a summer of Motocross I am always nervous at the Supercross track. Then, after the first session, I’m like ‘it’s not that bad …’. During the season, race-to-race, you’ll see an obstacle and start to think about it … but that’s when you click into focus and know that you are not coming to an event to finish tenth. I think you almost have to overestimate what can be done on a track sometimes.”

Tickle makes an exaggerated positive gesture when we ask if the sport still makes him think twice or harbor occasional fear. Racers need to be able to have the personal tools to do the job and match those physical assets with the mental desire to engage in a sporting pursuit with a high level of risk. “There are certain scenarios where you watch a race and you think ‘they’re close!’ but when you are in the moment it doesn’t feel that way,” he assures. “Or if you have a ‘moment’ … it feels quite natural. Everything is very tight in Supercross right now. Almost every rider in the Main Event has a factory bike or a well-supported team and it is all very close. I think the tracks have been mellowed because the bikes are so good now that we could pretty much jump anything. I think they [the promoters] are trying to achieve a balance of good racing and being able to keep everybody around [injury-free]. Personally, I have always built up as the season goes on. The margin for issues is so small. You have to be in tune with yourself and what is going on around you. 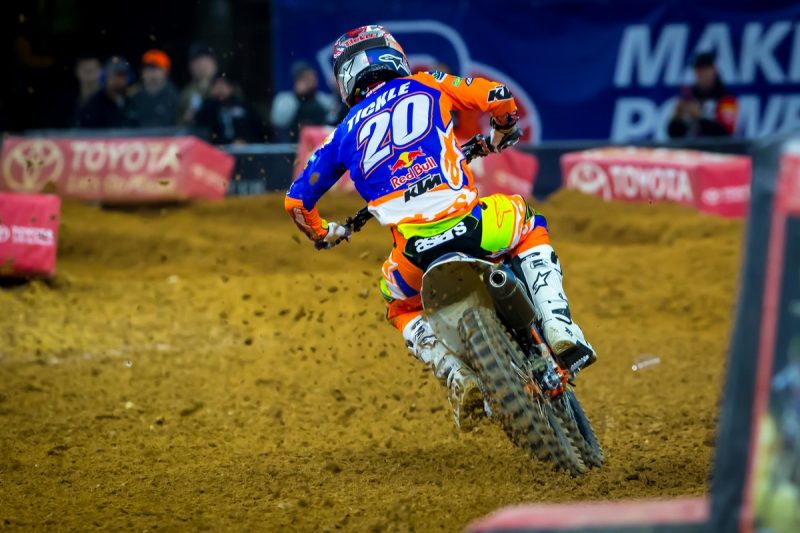 Supercross carries grand spoils and a profile unmatched in motorcycle offroad racing (the last three multiple champions Ricky Carmichael, Ryan Villopoto and Ryan Dungey all retired in their mid-to-late twenties) however outside of the top elite, the risk-versus-reward aspect can be skewed. Those twenty hopefuls at the gate every Saturday night between January and May have made – and continue to make – big sacrifices to be under the stadium lights but it seems that most have a grounded realization of what the whole show is about.

“It is important to be able to sit back and see where you are because it can be frustrating at times,” Tickle says. “You are always putting in the work and you have to appreciate things. It is awesome we are able to come here and do this, to be honest with you.”