Over the past few months, my focus has solely been on one project; my goal, my dream – finishing the Red Bull Romaniacs! It’s unbelievable how quickly the preparation time, and now the race itself, have flown by. 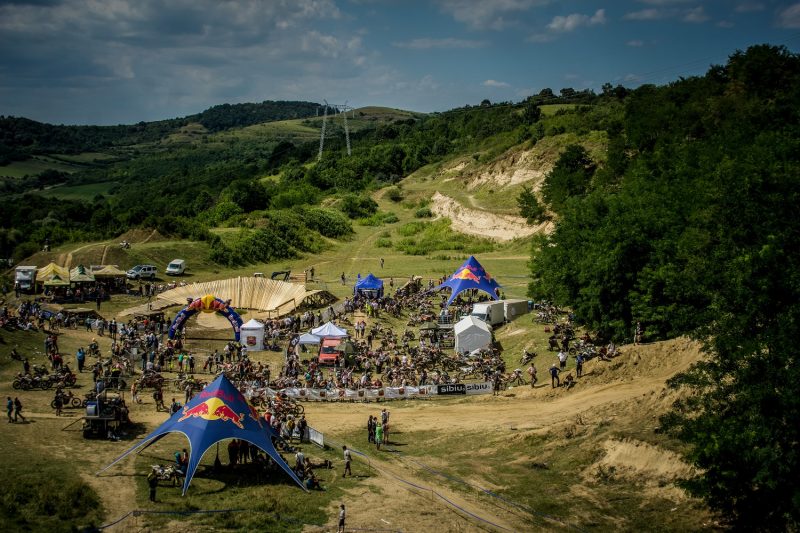 It was a challenging week in the Carpathian Mountains surrounding the city of Sibiu. Four days, over 500 km, 28 hours, and extreme altitudes… I experienced so much and can look back on so many incredible moments!

The event kicked off with the spectacular EnduroCross course; the prolog in the very center of the city. At first sight, I already knew it wasn’t going to be a walk in the park! This was confirmed during the first training session for the professional riders. Even the King of Hard Enduro – Graham Jarvis – speculated and pondered what would be the best and safest route through the long stony field.

I must admit that I was getting quite nervous here for the first time. The obstacles can be really tricky and strenuous, and the risk of injuring yourself here is really high. My one goal was just to get through it, without damaging myself or the bike. You can lose everything here and not gain a thing …

No wonder then that as I rode through the Red Bull arch after the first lap, I was incredibly relieved and proud. I couldn’t believe that I’d done it – YES! My anticipation for the following four offroad days grew massively, as I feel really comfortable in the Romanian forest!

Day 1
The first day of the toughest Enduro Rally in the world was extremely exciting. I knew that this day was crucial for me – was I ready for this adventure? I was about to find out. The morning went really well. I had so much fun on my bike, found a great rhythm, and reached the Service Point after just three hours. I started the afternoon on a high, which all of us riders needed, as it had started to rain. The Romanian terrain is something quite special; even when it gets the slightest bit wet, super easy stretches become a real challenge. Mega slippy! It’s really taxing both mentally and physically, as you simply can’t allow errors to creep in. Although I really had to battle through certain parts, I arrived at today’s finish on schedule and was on top of the world: I’d made it through the first quarter!

Day 2
Day 2 was the most beautiful by far, as the route took us over the magnificent, breathtaking mountains surrounding Sibiu. Navigation was certainly called for here, since it was sometimes hard to see the track markings. It took a little longer to reach the Service Point on this day. Covering 129 km, it was also a more intense day. As we had been informed the day before, a 3-km-long “stony surprise” awaited us at the end – a creek bed leading uphill! It was exhausting and long! Despite this, I had loads of fun and was able to reach the top without stopping. I knew that if I paused even once, I would lose my rhythm and tiredness would set in! Reaching the finish on the second day was a great moment – I was halfway there!

Day 3
The day on which we were all brought back down to earth with a bump. One hundred and fifty thrilling kilometers awaited us and even in the Bronze class, as in all the other classes, it was clear pretty quickly that we wouldn’t finish this stage in the time expected. The finish for the Silver and Gold classes had to be shifted; in the Silver class only 12 of 120 riders crossed the finish line and in the Bronze and Iron classes too, many riders received time penalties – including me. I was quite frustrated and disappointed, but knew that I could make up for it on the final day! Focus on day 4!

Day 4
The final day and I still felt raring to go! I’d paced myself well and my KTM 300 EXC was still in good shape. A clutch lever was the only thing I’d wrecked up to this moment. I was motivated, had the finish line in my sights and tried to enjoy the last day in the fabulous Romanian forest! It was another hard final day. Many riders retired, some sat at the edge of the track overcome by emotion or just completely exhausted – over and out! The most important thing was to ride smart! Every little error uses up energy and increases the chance of injuring yourself. I was focused and tried to imagine what it would be like to ride under the Red Bull arch for the last time this week. After what felt like an eternity, I was finally nearing the end. I could see the arch and the finish line, and could feel a sense of relief building! I managed the final hill climb at the first attempt, and survived the bank and the mudhole that followed. I’d made it! Red Bull Romaniacs Finisher 2017; finisher of the toughest Enduro Rally in the world… I still can’t believe it!

I started Enduro riding in 2014. I never would’ve thought that I would ever even take part in a race, let alone that I would take my place on an international podium, as I did last year at the European Cross Country Championship! Crossing the finish line of the toughest Enduro Rally in the world in my fourth season? It’s unbelievable! My dream has become a reality and I am incredibly grateful that I’ve had the chance to experience something like this. It truly shows what you can achieve if you really want it. This success has been a real achievement for me personally, but what’s even more important is that I’ve become a source of motivation and inspiration for other people, and that means the world to me!

127 Responses to Collecting Moments #4: Red Bull Romaniacs 2017 – Finisher in the Toughest Enduro Rally in the World!