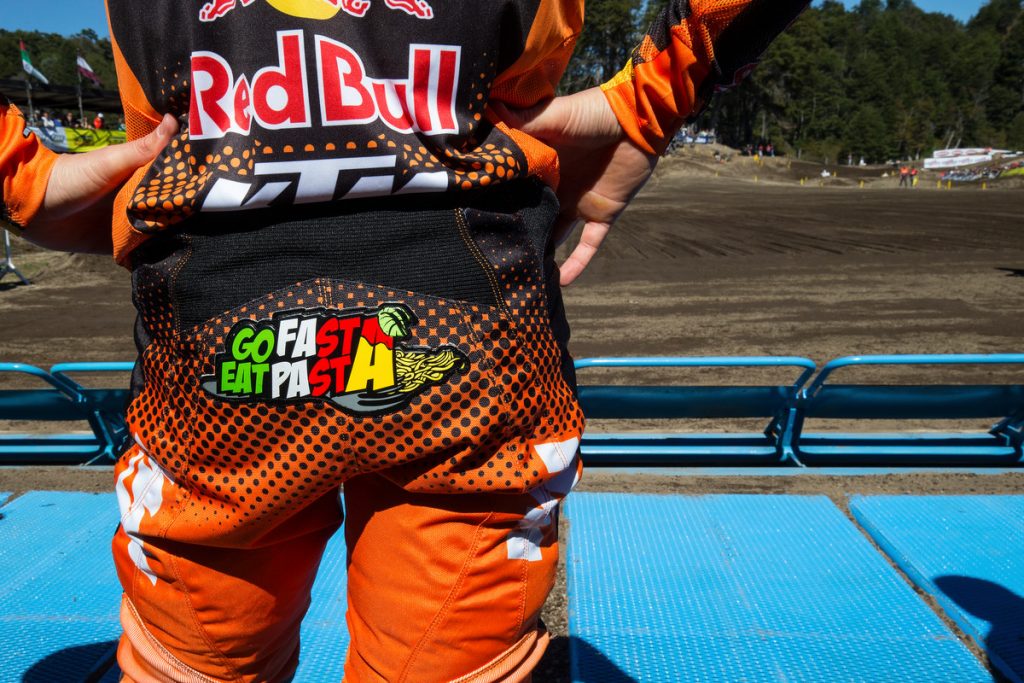 Interview of the Month: Go fasta, eat pasta – The diet of a champion

Eight times FIM Motocross World Champion Tony Cairoli is still winning Grand Prix at the age of 31 and defeating opponents a decade younger. We decided to ask the Sicilian what ‘petrol’ keeps him at the peak of arguably the toughest motorsport there is …

Flick through the Red Bull KTM Factory Racing rider’s social media channels and you’ll see a hashtag that pops up quite often: #gofastaeatpasta. “I love the Mediterranean diet and I like to stick with it,” smiles the six times MXGP World Champ as we speak after a plate of the stuff in the KTM hospitality unit at Valkenswaard and the recent Grand Prix of Europe in Holland. Tony stays down the road in Belgium during parts of the racing year with Dutch fiancée Jill but remains firmly enamored with his favorite form of nutrition. “I take fuel from it,” he says referencing the hashtag. “Rome is famed for Carbonara, which is my favorite pasta. I might have it three or four times a week! But I’m eating many kinds of pasta dishes. I think we have an advantage with our team being Italian. Other countries eat a lot of fried things but the Mediterranean diet is already quite healthy with many grilled dishes and fish. I like a lot of whole meal pasta as it’s easier to digest.” 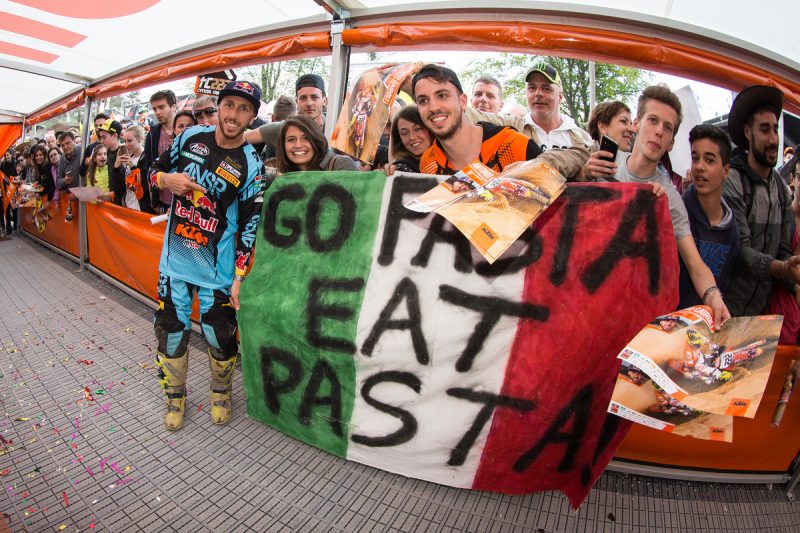 In a Grand Prix weekend a rider will face two practice sessions, a 20 minute and 2 lap qualification heat, a 20-minute warm-up period and then two ‘motos’ of 30 minutes and 2 lap duration across tracks that can range from dusty and fast hard-pack, rough and rutted soil, deep sand or thick, strength-sapping mud. Athletes can burn up to (and more than) half their carbohydrate energy storage in one race alone; and then have to quickly refuel to compete again less than two hours later. Combined with the riding, training and testing, these athletes – in almost every sense of the word – have to shovel away plates of food to keep the ‘engine running’. Considering that Tony will be ‘carbing-up’ during the week before a Grand Prix what will #222 actually need in front of his knife and fork when it comes to performing on Saturday and Sunday?

“So, it’s a cappuccino in the morning,” he says. “… but I also need some protein so I always eat some eggs – I’m a little bit English like that! I need that energy on race days and also for training.”

“Around ten o’clock I’ll have something else like toast with ham and cheese and for lunch it is normally pasta always, and I’m easy with either tomato sauce or pesto: those are my usual plates on race weekends. Sometimes it might be rice with chicken or just plain white pasta with oil, I’m not too strict.”

Tony left his family home in Sicily for the Italian mainland and more competition as a young teenager and it meant growing up fast in many ways. Feeding himself was a skill he rapidly had to develop. “When I moved from my home to northern Italy I already had to cook for myself,” he explains. “I lived alone so I had to teach myself. I like cooking … but the only thing is that it takes time! When I’m at home or on holidays then I always want to get in the kitchen. Some Sicilian food can be quite heavy and it’s not the best for race day so I do some of the old recipes during the week; I try to keep my origins.” 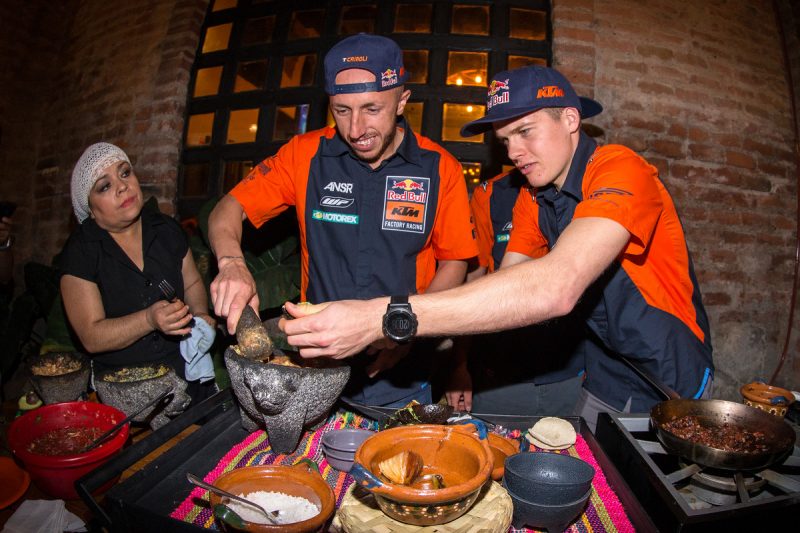 Cairoli is now 31 years old and is still winning Grands Prix at the highest level and beating rivals that are eleven, nine, seven and six years younger than him. He admits he has looked into the scientific side of nutrition and his diet but hasn’t made radical changes over the years. He even told me a decade ago that his favorite plate was carbonara; so he doesn’t vary too much! “I made some tests to see what is easier for me to digest; I think the last time was three years ago so I don’t do it too often because I am mostly OK with the food groups. There are some that I get more energy from than others but no big problems. I use some protein shakes and amino acids but not too much. Some multivitamins as well.”

As an MXGP World Champion Tony needs the right ‘input’ to get the best ‘output’ and although he is a furiously hard worker Cairoli doesn’t seem to compromise too much in order to stay at the top of the game. When things go well – as they have done on three occasions so far in 2017 – then he does allow himself a small treat on a Sunday night. “I like chocolate!” he confesses. “Sometimes I eat a lot of Kinders and if I have a good race then I’ll have a reward but I’m lucky that pasta is my favorite food and it is something that is also good for my sport.”

If you wanna ‘gofasta’ then you know what you have to do. 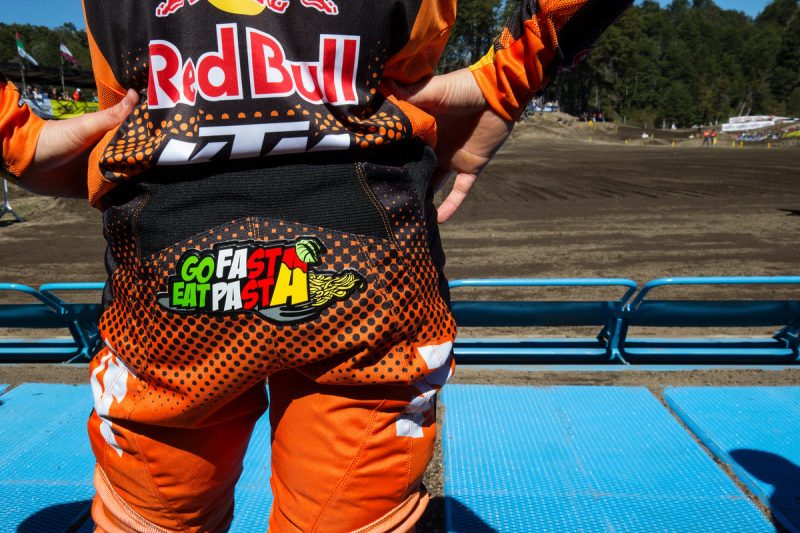 163 Responses to Interview of the Month: Go fasta, eat pasta – The diet of a champion