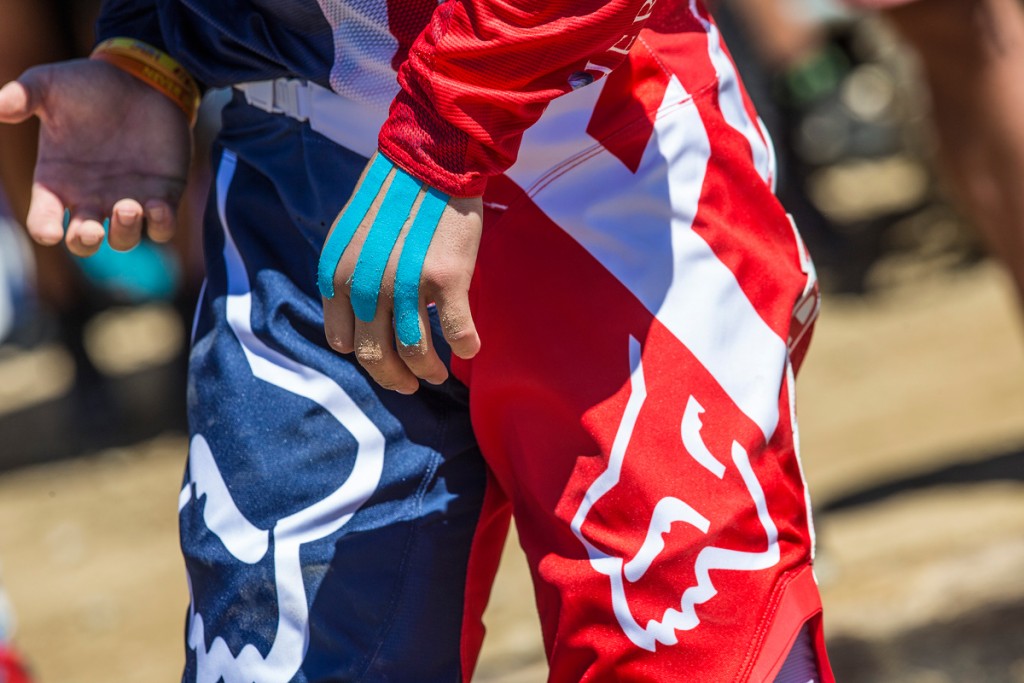 MXGP stars are a fairly accessible lot. They can often be seen preparing their kit or having a team debrief in full view of the public. This informality means that eagle-eyed fans can see some curious behind-the-scenes part of being a pro racer … here are a few we have spotted in the Grand Prix paddock …

Sanitary towels
This must rank as one of the strangest but also one of the most established practices for pre-race prep. The absorption potential of this pad – a inessential tool for most ladies when it comes to female hygiene – gives a powerful assist to the riders who sweat more than others; especially useful for races in hot climates. Either stuck to the forehead section of a helmet or attached to the top of goggles, the modest sanitary towel is a handy blocker and helps keep vision clear. “It looks funny but it is useful to stop the sweat dripping into the goggles,” said a leading MXGP rider to us. “The foam takes a lot of moisture but it reaches a point where it then squeezes into your eyes – like a sponge – or a stone will hit the goggles and drops will fall down inside.” 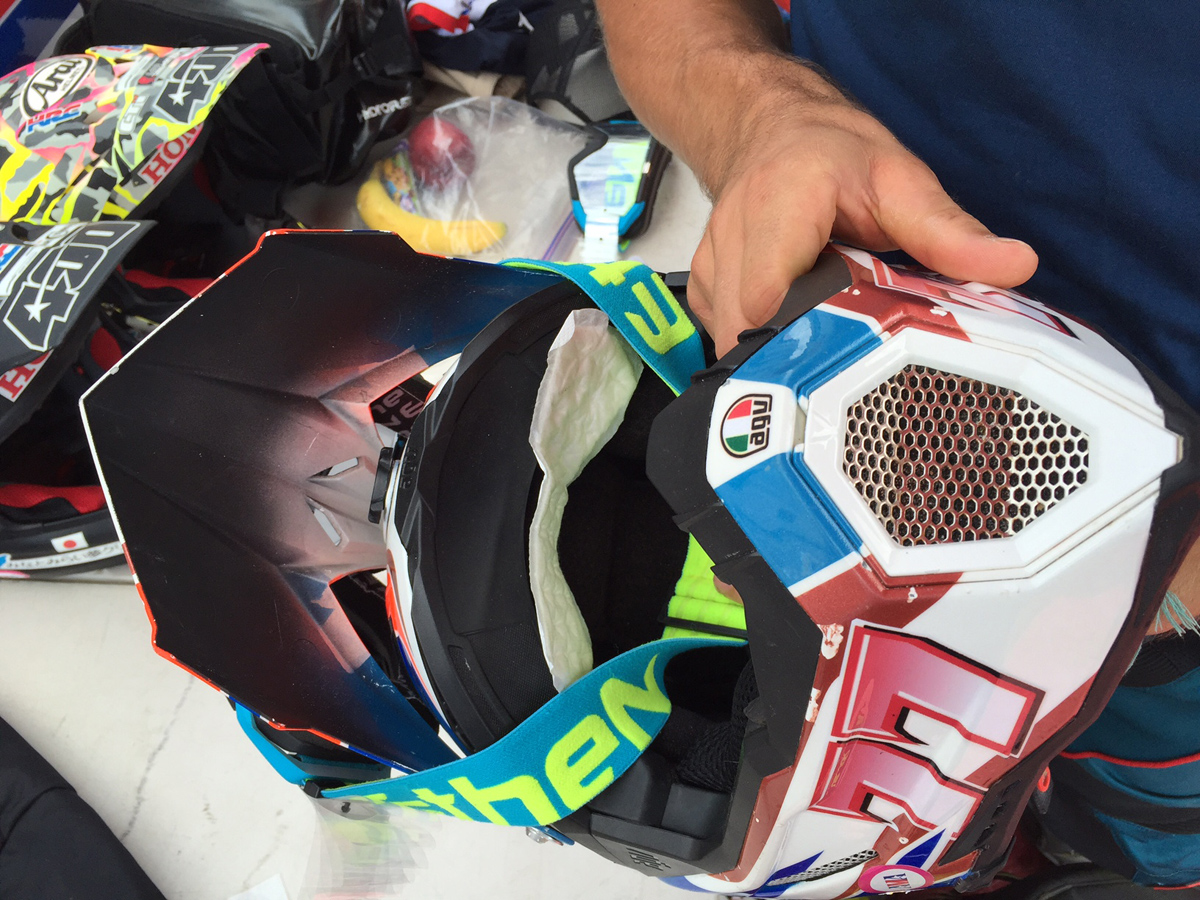 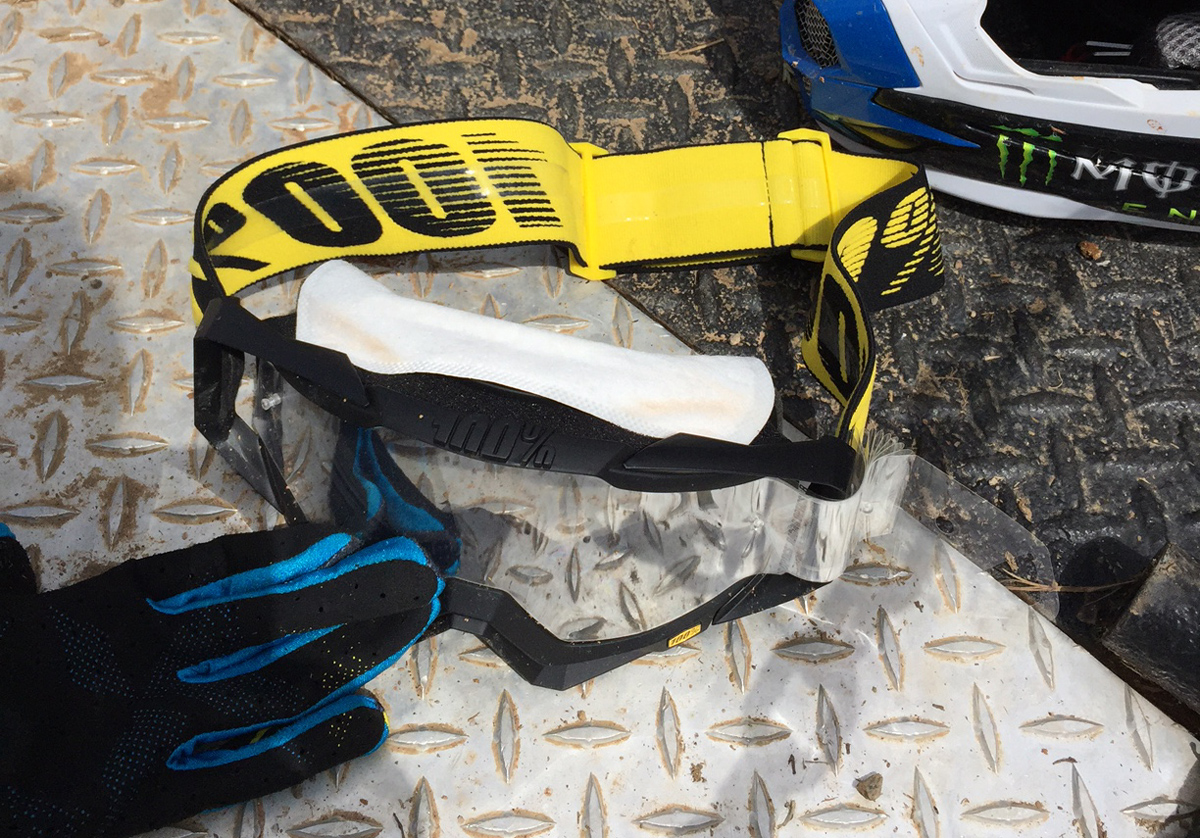 Nose magnets
Some riders – like 2015 World Champion Romain Febvre – like to use this system, created by knee brace specialists and medical experts Asterisk in the United States. Two magnets – one clipped to the inside of goggles and another applied to each side of the nose by adhesive tape – assists breathing and inhalation. Febvre told us the nasal magnets get trashed after every use but he found the AC system helps for physical performance.

Booties
Alpinestars set a standard for modern motocross boots with their Tech 8 model that featured an inner ‘bootie’ for extra support and protection. The milestone Tech 10 took the technology a step further with a torsion system to work in tandem with movement of the leg and ankle. Even today the sight of a professional athlete walking around with an odd ‘half boot’ is commonplace in Grand Prix. 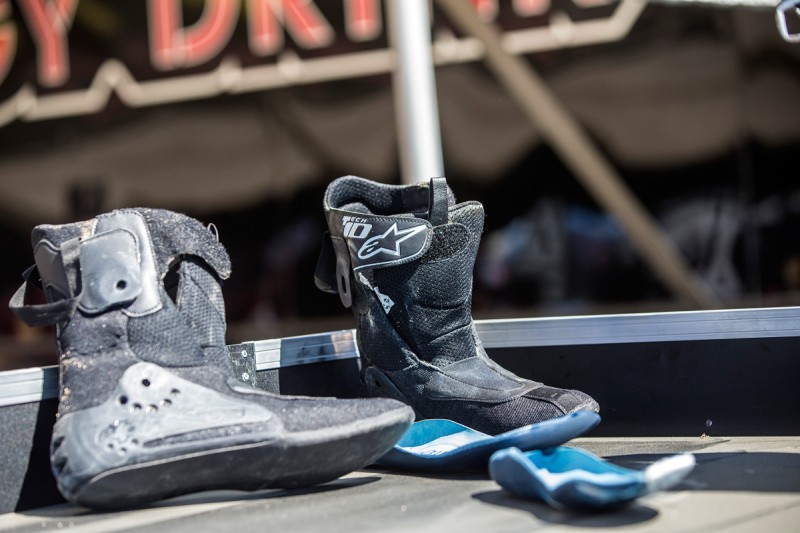 Talc
Red Bull KTM starlet Jorge Prado is a fan of getting dusty before getting on the bike. The teenager will rub talcum power onto his hands and then immediately place his gloves over the top. “For me it is a case of keeping the hands dry and minimizing sweat to cut down on blistering,” he explains. Best not to shake Jorge’s hand in a good luck gesture before he heads out to the track! 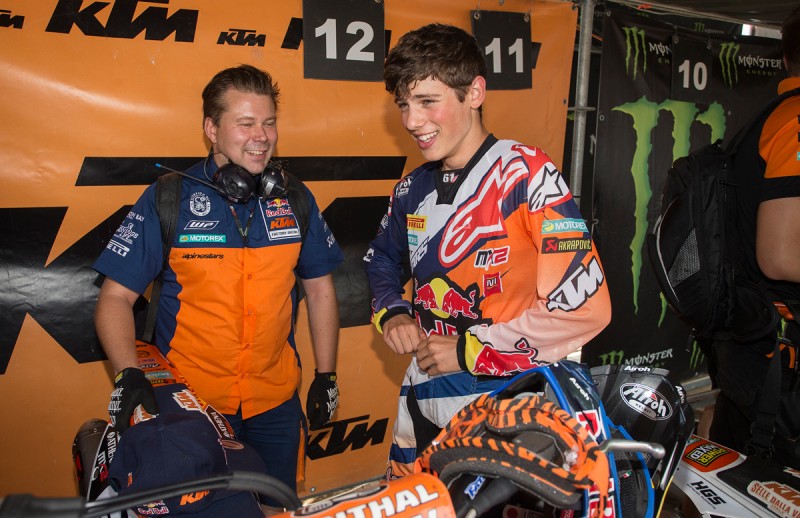 Kinesio tape
Motocross athletes can now be spotted with Kinesio tape and a form of treatment innovated by Dr Kenzo Kase at the end of the 1970s. “It is quite late coming into motocross, we were using it in athletics even fifteen years ago,” explains Red Bull KTM physio and former sprinter Giuseppe Chiodi who practices on the athletes in orange throughout the paddock and is mostly responsible for all the physiological tape in a multitude of colors covering racers’ bodies. The Italian explained that he attended a thorough training program to learn how the method assists different areas of the body, supporting ligaments and easing muscular tension (a common complaint after a crash). The tape itself is made of cotton and is hypoallergenic and breathable … and comes in some wacky and distinctive shades. 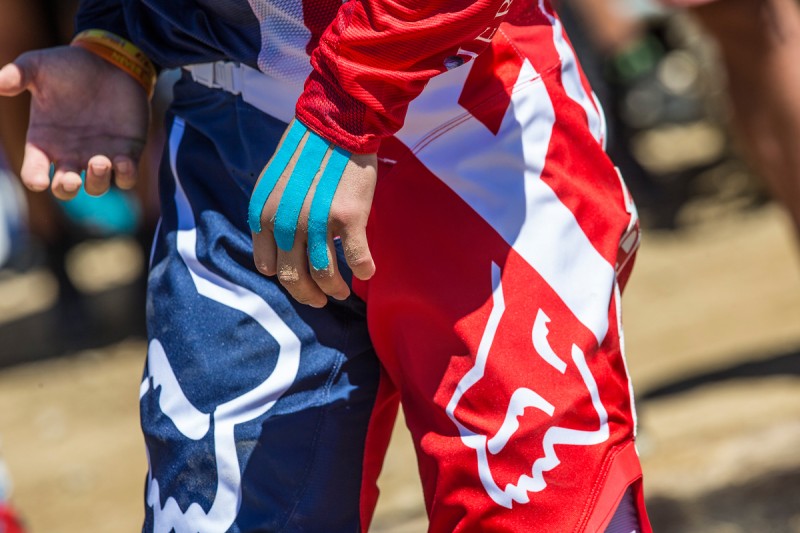