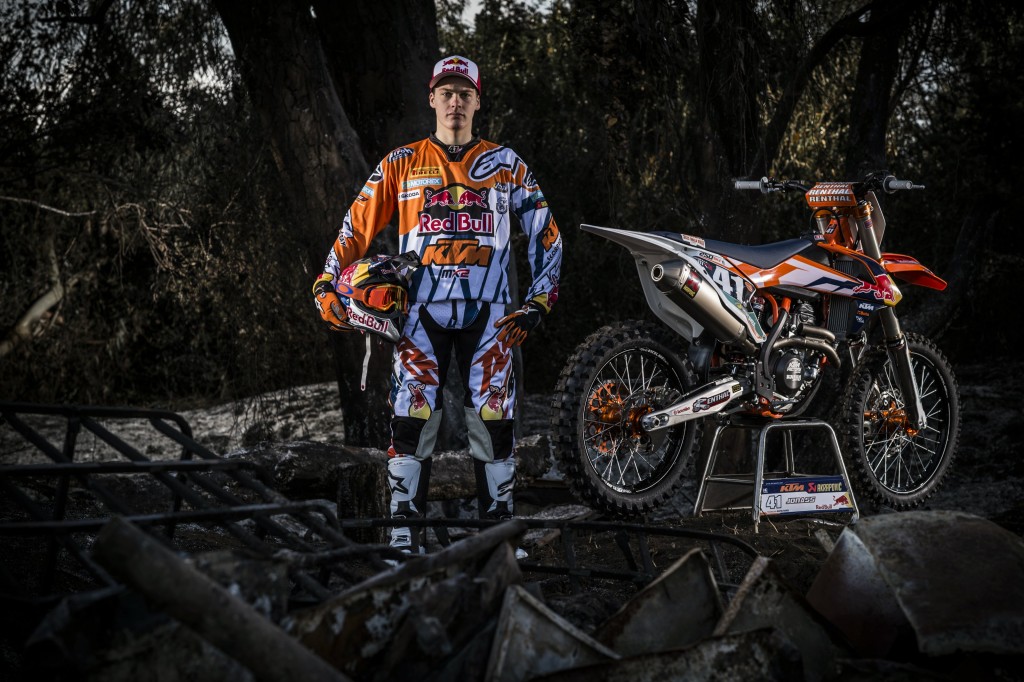 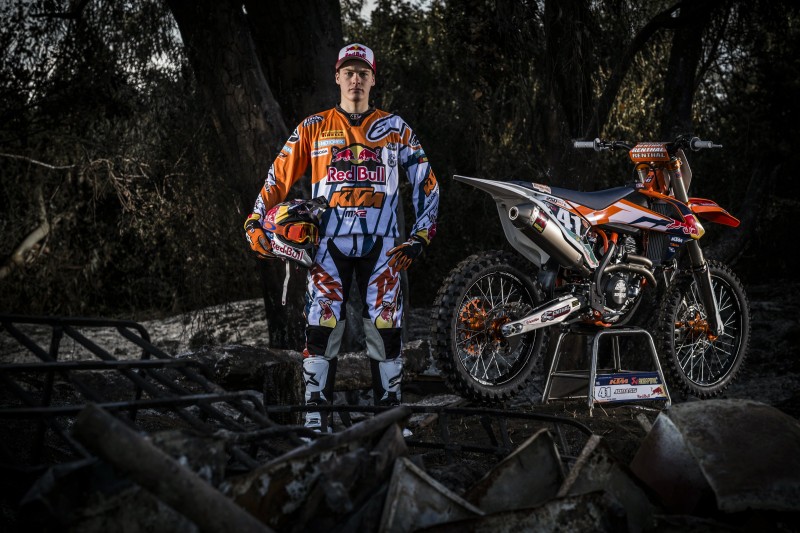 Anybody who has gassed an offroad motorcycle knows that it strains numerous muscle groups (many of which we don’t often use every day and we’re left feeling like Frankenstein’s Monster the morning after a ride) and can be a tough cardiovascular work out. While Enduro mixes skill and stamina and various other attributes perhaps Motocross is the hardest discipline in terms of physical demands due to the sheer intensity of those two punishing motos across diverse terrain and conditions.

“I would compare the cardiovascular profile of a high level motocross race to a 10 km running competition; time, heart rate, lactate levels are quite similar,” says Stefan Nüsser, Sport Scientist from SNDC in Germany and motocross trainer. “It’s a very demanding sport. Heart rates in races are averaging 180 and beyond, lactate levels are 4-8 mmol/l; which is high above the anaerobic threshold. There is also a high load on muscle structures which results in highly elevated repairing processes after a race weekend.” 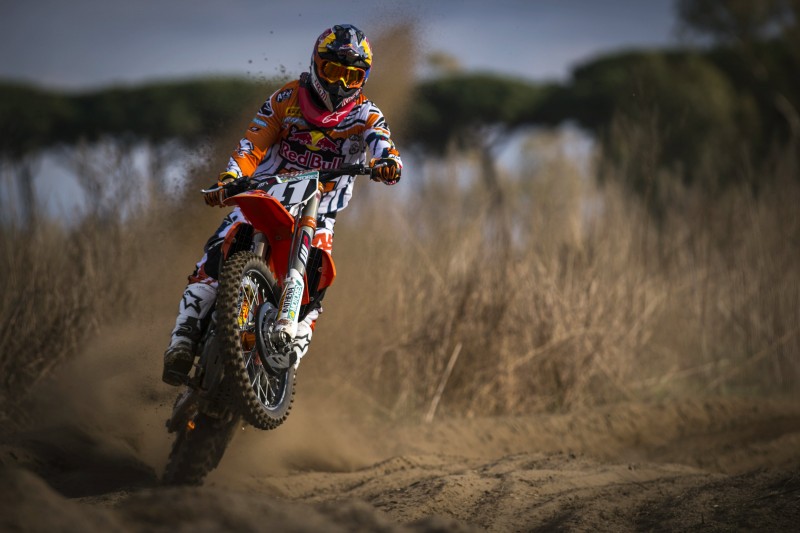 “I think you have to be very tough to be a Motocrosser,” opines Red Bull KTM’s new factory star Pauls Jonass, an eighteen year old former European Champion who is now pushing for the number two plate in just his first season as a factory racer on the KTM 250 SX-F. “If you compare it to being a cyclist then physically it is two different kinds of strength. Our heart rate might be nearly 200 for thirty minutes but a cyclist might have it at 140-150 for three or four hours. I last wore the heart rate monitor in the Italian Championship in the sand of Riola earlier this year. My maximum measurement was 200 with an average of 190 across the race. That’s pretty high!”

Jonass has excelled in 2015. The friendly and confident Latvian completed his apprenticeship year in 2014 and came into the works Red Bull set-up looking for consistent top ten results. It was – understandably – a conservative estimation. He is actually fourth in the championship standings and has appeared on the MX2 podium several times. The leap in performance has a lot to do with his status as a factory athlete but also his work with 125 Junior Team leader and former world champion Stefan Everts over the winter. The training regime was at the heart of Jonass’ capability to push near the front of the MX2 pack. It was a step up in terms of the exercise he had previously done but Jonass had already been looking after his conditioning as a young teenager. 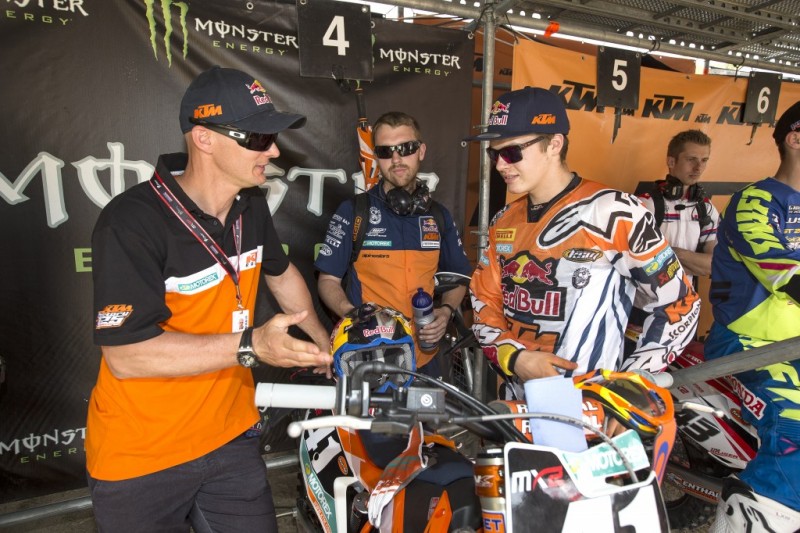 “I would say the hard-core training started when I was fifteen and had to move up from the 85cc to 125cc class,” he says. “The bike gets bigger and heavier and the competition improves also. It got a point on the 85 where people would see me and think ‘I’ll let him pass’ but that definitely didn’t happen in the 125s. Every year you want to move up and get better and you have to work really hard to make it happen.”

Under the guidance of Everts’ old trainer Willy Linden, Jonass spent a large part of the winter (from October to Christmas) in Belgium and ploughing through a new schedule. “This is the first year where I have been in the gym almost every day,” he reflects. “I needed to build up my strength and it was hard work. I lost some kilos! The first month was really tough and then it didn’t get any easier but I was into a rhythm and was used to it. When I felt I was tired then we took some calmer days but almost every time it was ‘flat out’. The exercises were also different for me. In the winter we lifted weights and worked on strength. It was not too much about flexibility or balance. When the season began we moved to lighter weights and varied the exercises. Before I had been doing strength together with flexibility and now it´s strength followed by flexibility.”

Grand Prix riders are normally on the bike a lot between races and they practice on terrain that is usually coming up in the MXGP calendar like hard-pack or sand. It means busy days for them away from world championship circuits, often with national or international events thrown into the agenda as a means of testing or further training away from the GP gate. 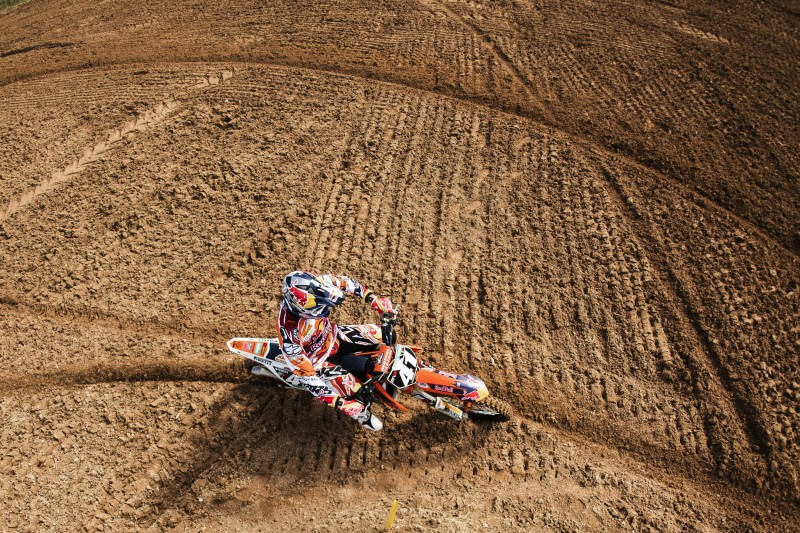 Jonass gives some insight as to his timetable: “In the winter it depends on the week but normally it will be between two to four times with the bike and usually two long motos. I do 2-3 training sessions a day. Two physical training and then the riding. I’ll work out in the morning, ride and maybe work again in the afternoon or evening. It is mix of running, cycling and gym work. I normally have one day off.”

“I look at the schedule and try to follow it as much as possible but sometimes after riding in the morning then it’s almost impossible to go running! Then I make a call to Willy and ask if I can go cycling instead. I am not the kind of guy that says ‘it’s tough, I don’t like it’, I prefer the feeling of having done two forty minute motos around Lommel (notorious sandy Belgian track) and getting home and then not being able to do anything! It’s so good. I know that if I am tired then I have done good work.”

Then there is the scientific side of being a professional athlete. “We do CO2 max test three times a year and a blood check every month to see what is going on with me and if I need some vitamins or supplements,” Jonass reveals. “That blood test was another change for me and from the results we could see that I was perhaps pushing a bit too much and had to scale back. With blood you can see almost everything.”

As a Red Bull-supported racer Jonass has also had access to the company’s comprehensive rehab and training facility in Austria. “I’ve been there four or five times and the first time was quite special,” he explains. “You are there for nearly one week and almost every day there is a test; even psychological where you have to talk about your favourite things and do tasks on a computer. I was fourteen at the time I first went and was quite bored with it and scored quite badly! In the end it was necessary for us and very useful for learning about yourself.” 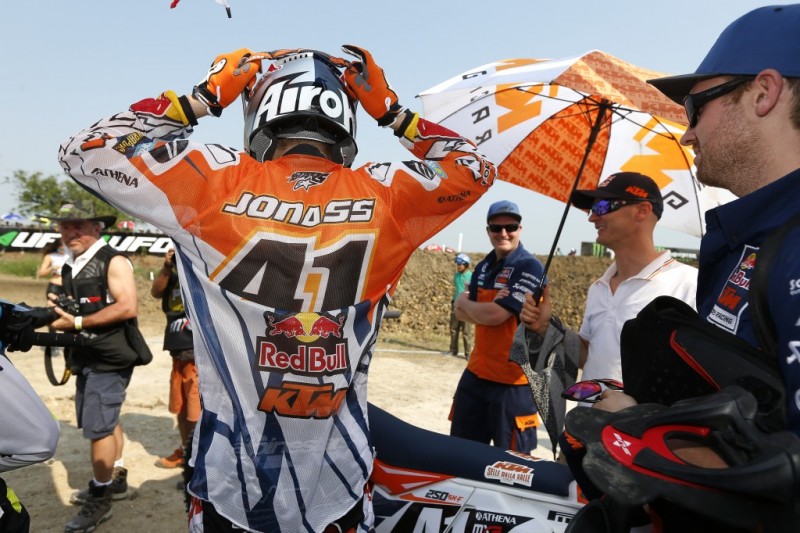 It was generally thought that motocross riders needed to be physical ‘powerhouses’ to excel at the sport but Nüsser now believes an evolution is happening in MXGP with champions and race winners like Tony Cairoli, Romain Febvre and Jeffrey Herlings all slightly built but blending sheer strength and technique. “From my feeling the profile of a rider is changing at the moment,” the German says. “In the early days you had these physically strong riders with limited riding talent. Nowadays I think the physical side plays a slighter lesser role and the actual capability on the bike is getting more in focus, like being able to scrub and playing around with the machine.”

Being a successful professional Motocrosser could mean that riders like Jonass needed to be on two wheels since they could practically walk to sharpen their feeling for the bike and the dirt. However that continual learning process through repeated practice and riding is something that racers still do until the end of their careers. In other words it still takes the equivalent of a lifetime of dedication and determination to ‘make it’. Rising to the top is not purely about your physiological genetic make-up as it would be in other endurance pursuits.

“Motocross is a very complex sport and the physiological side is not solely responsible for a rider’s result,” Nüsser adds. “I’m sure that any rider can bring his physical performance up to a level need to be world champion. In comparison, for sports that mostly rely on physical performance like cycling, running, rowing, and cross-country skiing you need some genetic talent to perform at top level. However the overall load and stress on the physiological structures (through Motocross) are mostly underestimated. Maybe that’s a reason why riders stop their careers in their mid-twenties in the U.S …”

Regardless of a person’s finesse and skill on a dirt bike Grand Prix winners still need to work, and to push. The volume and relentlessness of the training among the top elite means a lot of repetition and it is not unusual for individuals to find new ways to engage their minds as well as their bodies. MX athletes have been known to rock-climb, ski and to box as a way of variation. Even at eighteen and on the precipice of MXGP greatness Jonass discovered a novelty: “We tried roller skiing this winter! It looks weird on the road but it is good training for me. Something like mountain biking is a bit too dangerous. One crash can lead to an injury. You can try different things but you also need to think about being ready to ride at any time.”