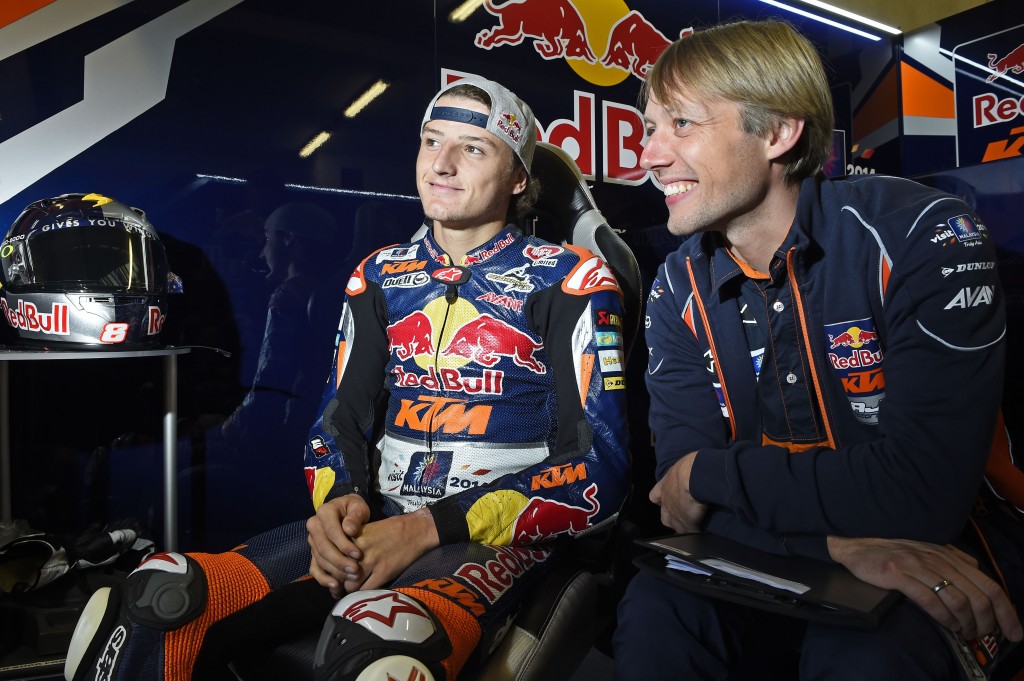 How to … get into MotoGP

Working for a team like Red Bull KTM can be a dream. We asked how to make it a reality … You like bikes, love racing and see all those pristine shirts and pit-lane set-ups on the TV. How do you get into that world? As you might expect of a sport set at world championship level it is not easy but we chatted to Red Bull KTM boss Aki Ajo as well as a member of his team, Patrick Unger, for some insight.

“I think there are many groups and backgrounds from where you can find staff but there is always one thing behind it all and that’s the passion for the sport”, says Aki Ajo, the Finnish overseer of his own Grand Prix team since 2002. “I don’t think you can do this job if you are not passionate for MotoGP. If you are just interested in electronics or mechanical things then I think it is quite hard to stay here for a long time. For some people the passion is already there before they even start to dream of working in the paddock. For some others they might have a special skill then the passion comes when they start working with the bikes and at the races. You need the passion to have the energy to do the job and that is the main thing for me.”

Aki Ajo: “I don’t think you can do this job if you are not passionate for MotoGP.”

So how to judge if a person has the right level of that passion and commitment to racing? “I think you can see it quite quickly normally. You have to analyse a person a little bit and find out why he likes racing, what goals he has, what family he has, his hobbies and what he is looking for in life. You can see quickly if it is possible to work with a person.”

Ajo guided Sandro Cortese to the first ever Moto3 world championship with KTM in 2012 and previously wracked up two more titles in 2008 and 2010; the latter with a certain Marc Márquez. The former racer now steers the KTM and Husqvarna factory efforts in Moto3 and is relying on a bigger crew than ever to do the job. Nine months of racing, testing, a workshop base in Spain and essentially life on the road means that finding a blend of personalities and characters is vital for harmony and an effective working machine tuned to deliver results for the team, partners and sponsors. Basically your face has to fit.

“I think the attitude can be just as important as the curriculum”, Ajo affirms. “Normally I’m not so interested in the CV. It is just a piece of paper. I like to talk with the person and judge their attitude. Sometimes it can be more complicated to take an experienced and knowledgeable guy because each team has its own system. We are not arrogant but we trust our system and we like to keep our feet on the ground. We look for people who can fit in with the way we work.”

Ajo: “Normally I’m not so interested in the CV. It is just a piece of paper. I like to talk with the person and judge their attitude.” 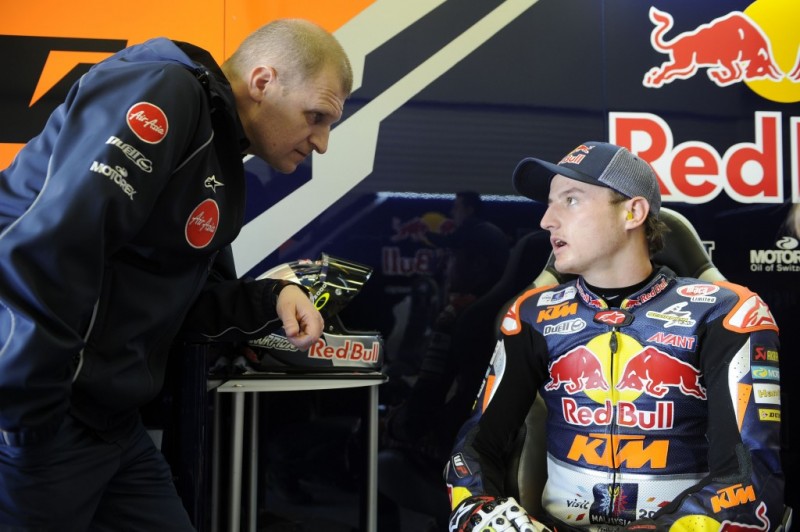 Part of the crew is Patrick Unger. The German has filtered his way through the team since 2010 and is now the Crew Chief for Jack Miller as well as controlling the technical side of the entire Ajo operation. “In between the sessions I’m responsible for technical things in general – across the teams – but when Jack is on the track I have to focus directly on him”, he says. “The general work means being in touch with the KTM guys at the factory to give feedback on development of the parts and make requests.”

Unger is another ex-racer who competed at German and world level and an example of how simply being in the paddock anyway can lead to a change of direction and profession. “All the careers are so different”, he says. “Many guys in the paddock have been riding themselves – like me – so I think it is very helpful for this job as you understand the rider very well: what he needs, what he describes and what he feels on the bike. I found it very hard to say ‘I’ll stop riding’; it was the hardest part in the development process but once you ‘get it’ then you really start to enjoy the job. For sure you need the interest in motorsport, and more so bikes. It has to be a personal hobby. You can make it here through studying but I think it is very hard to then get into the GP paddock because you might not know many people.”

Patrick Unger: “Many guys in the paddock have been riding themselves – like me – so I think it is very helpful for this job as you understand the rider very well.” 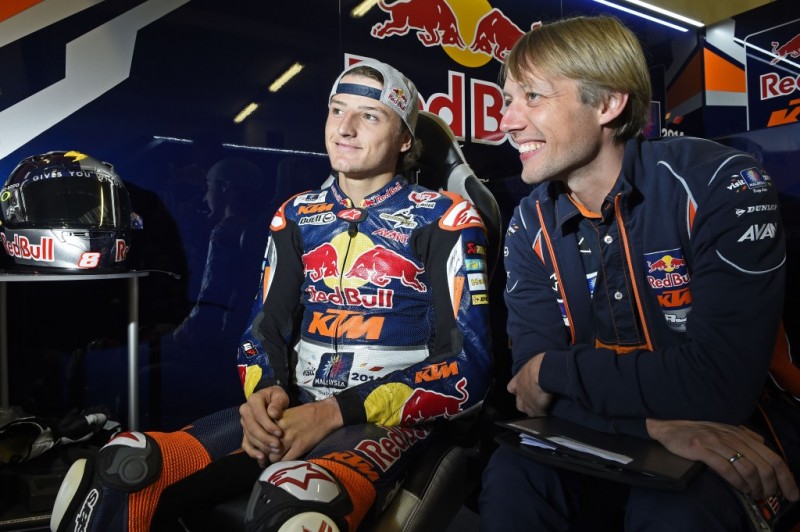 Around Unger there seems to be a busy and focused group when we visit the team at the Catalunya Grand Prix. Looking around there is a distinct feeling of the age span. “Maybe it is easier to find that attitude from the young people”, Ajo explains. “They might start as a second mechanic and if you see that they are very hungry and want to learn more and have targets to take steps, then many times those are the best guys finally to take on more responsibility and have a better position in the team. It also means they grow and maintain the spirit of the team. If you get to a responsible position like a data recorder or crew chief then we have to be sure that it is the right person for that work. Many times people are growing and studying in the company; we are a bit like a university in that regard and that is the best. Learning in house.”

Ajo: “Many times people are growing and studying in the company; we are a bit like a university in that regard and that is the best. Learning in house.”

OK. So I’m not that old. I’m crazy about racing. I’m ready for all the hours and demands of being in a Grand Prix team. But I’m not yet in the paddock and I haven’t raced. Am I stuck? Other than looking at mechanic racing schools like Monlau Competition it seems I need to get to events and be putting my name about.

“Most of the time it is about the network”, Ajo says. “Including the Spanish Championship team I would say we are around 35 people and the group is bigger through the technical partners and also factory staff. The network is important because the mechanics or the companies or contacts with us will know of a person who is interested and could be good for us. That’s how it works. Sometimes we get emails but if I don’t have a recommendation then we are at too high a level for me to reply to each one. I would prefer an introduction or a reference then people knock on the door and we talk.” 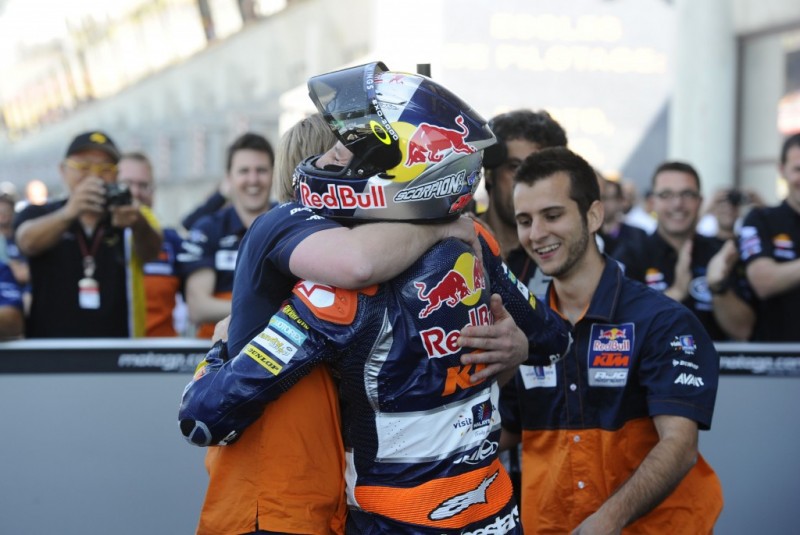 171 Responses to How to … get into MotoGP