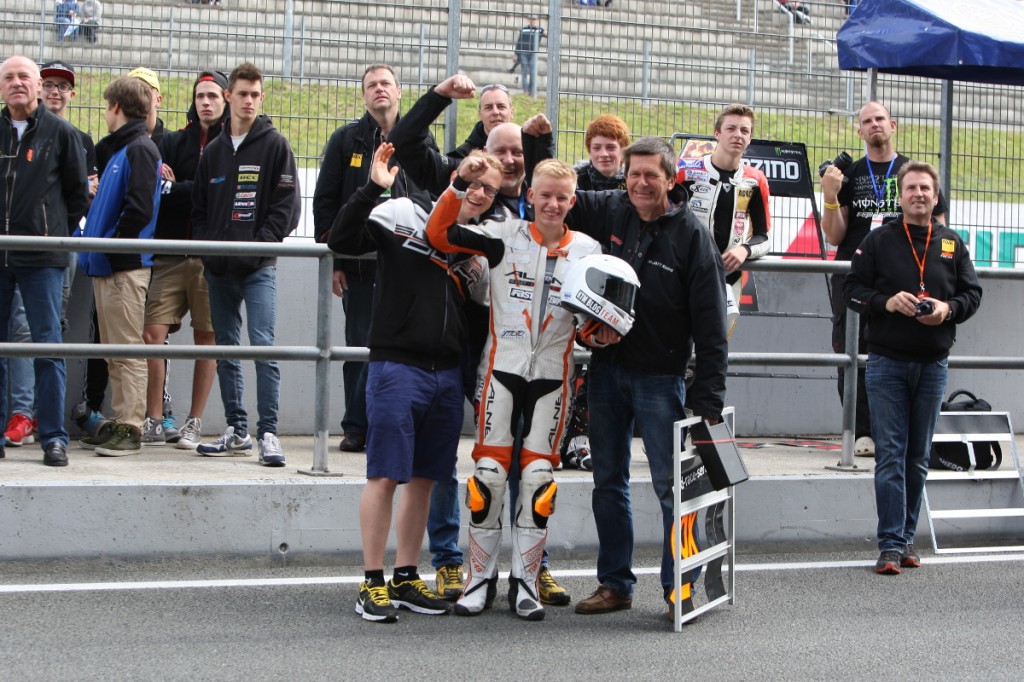 KTM never hesitates when it comes to racing. The recently established ADAC Junior Cup powered by KTM allows guest starts on a payment of a flat fee of EUR990. Therefore, it´s not surprising that someone hit on the idea to register a guest starter for the KTM Blog. The idea was just too tempting.

A candidate was quickly found: Tim Holtz from the German town Nienburg – for the past three years the talented and well-bred 14 year old student competes in track days and occasionally races with the KTM 690 DUKE, Street Triple and since lately even with a KTM 1290 SUPER DUKE R. Tim Holtz needed no second invitation: supported by cybermerchant MotorradreifenDirekt.de he raced the second run of the ADAC Junior Cup season in Oschersleben for the team KTM Blog. At the Junior Cup tent the KTM RC 390 CUP guest bike was handed over along with a new set of tyres. After equipping the bike with number and stickers, adjusting the hand levers and footrests and finally passing the acceptance test, Tim was ready to go. 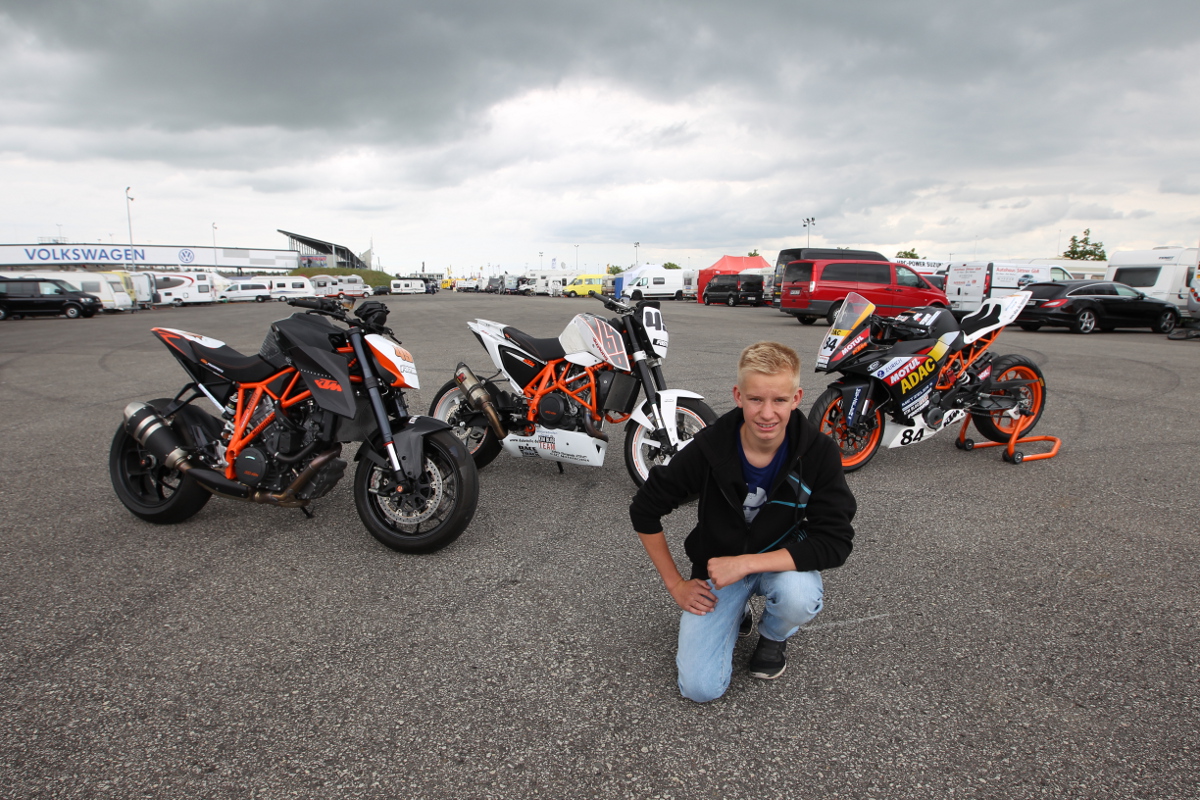 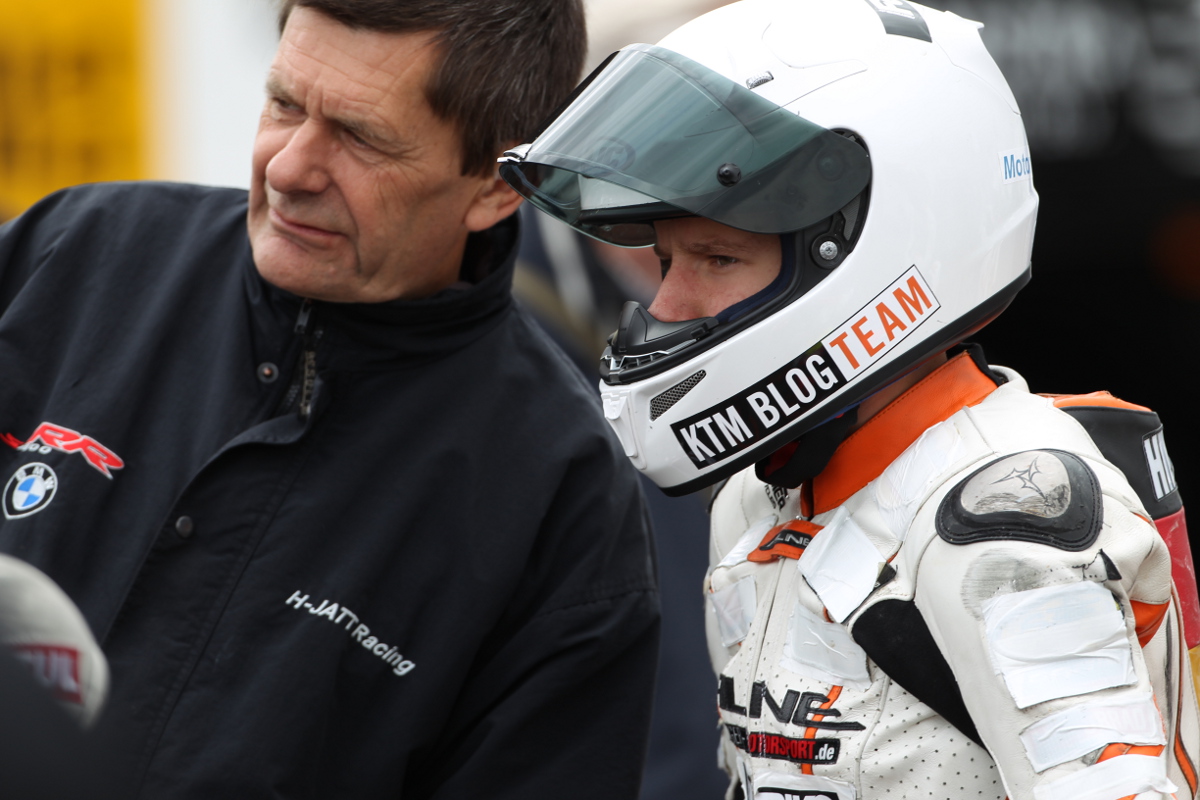 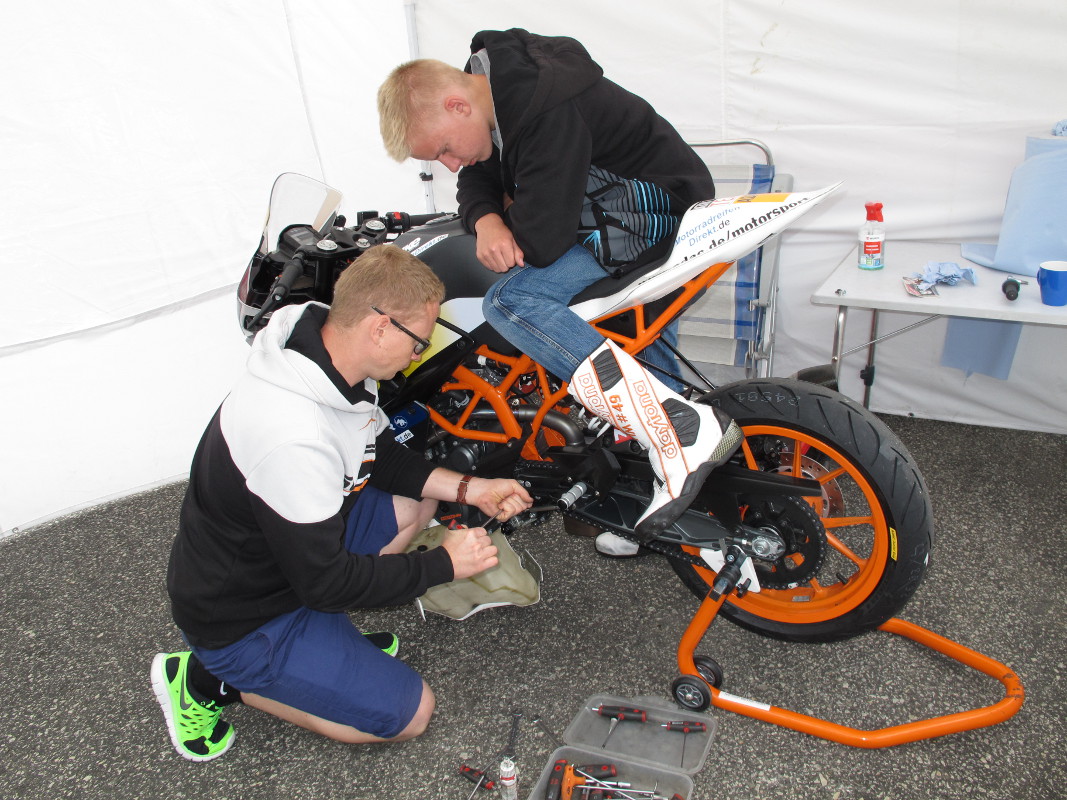 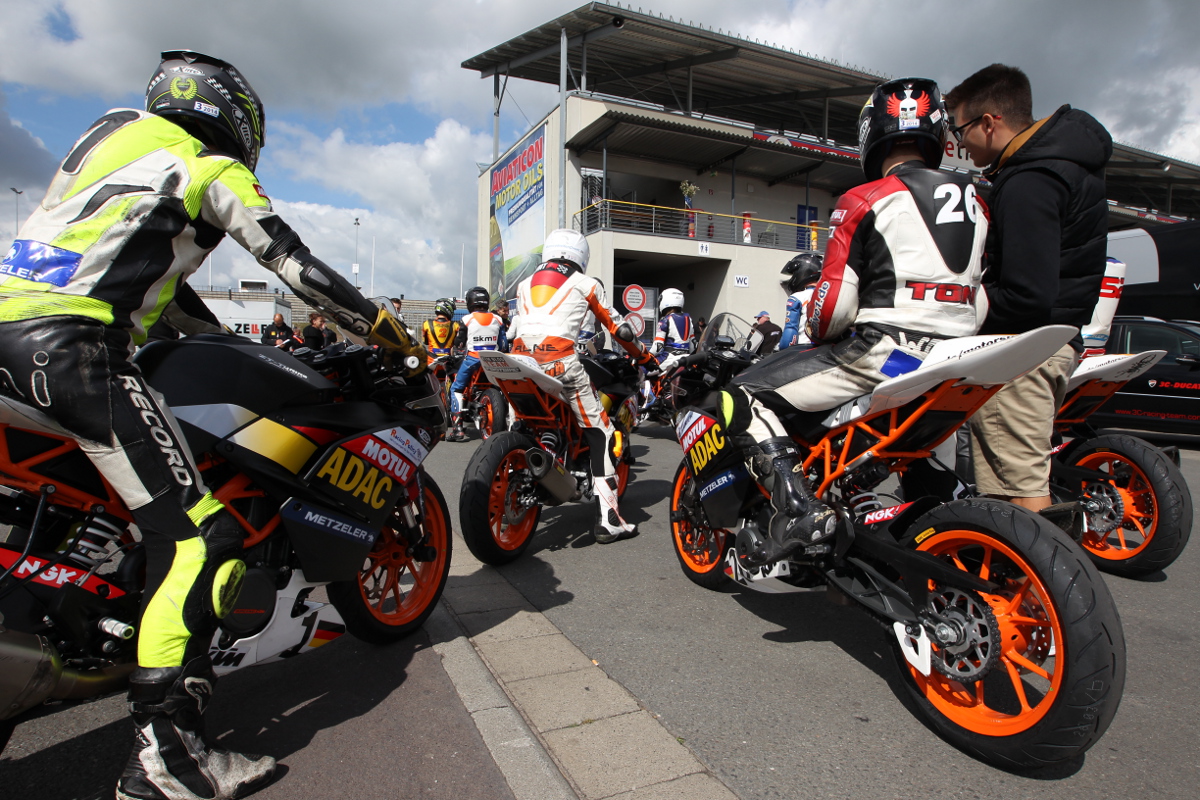 Quickly the 14-year-old student got used to the KTM RC 390 CUP, which was reduced from standard 44 to 38 hp for the junior class. Friday´s free practice Tim finished in 15th position and then wished for a longer transmission. The mechanics mounted a two wheel smaller chainwheel, but the first timed qualifying session ended with a harmless fall over the front wheel. During the second qualifying session Tim could slightly improve his lap time which finally led to a start from 17th position in the sixth row of the grid. Overall 25 youngsters aged between 13 and 20 years, among them one girl, competed in the second of eight races of the ADAC Junior Cup powered by KTM. 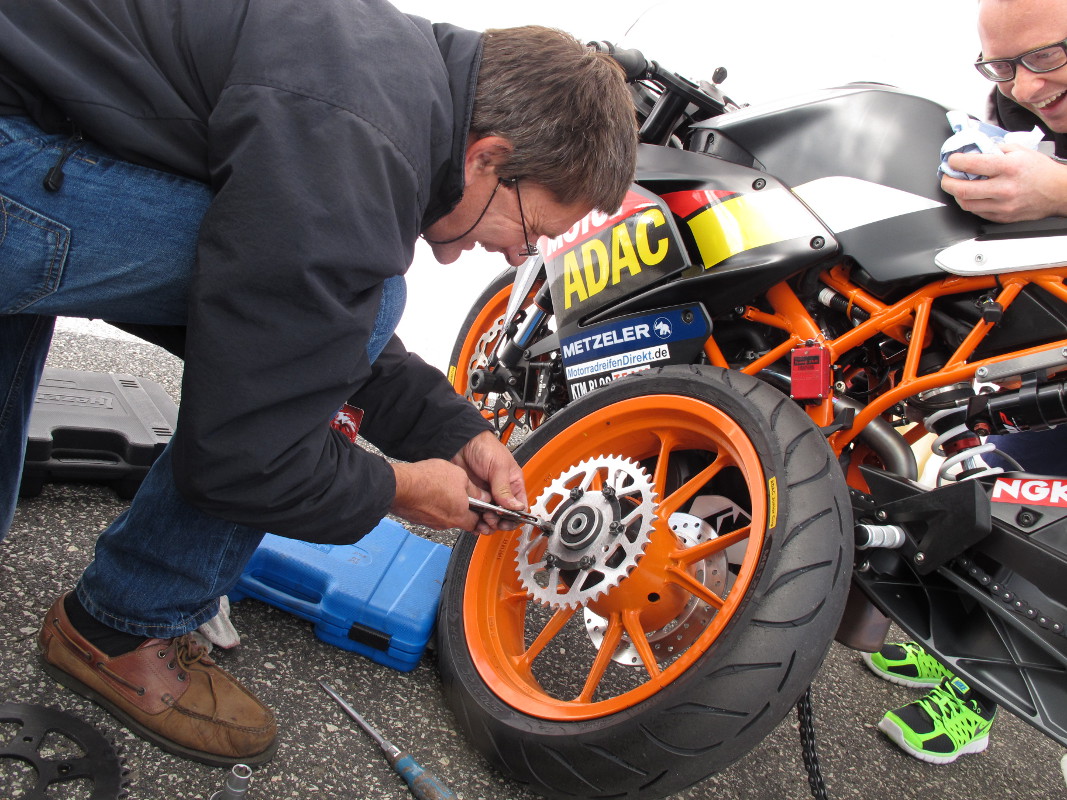 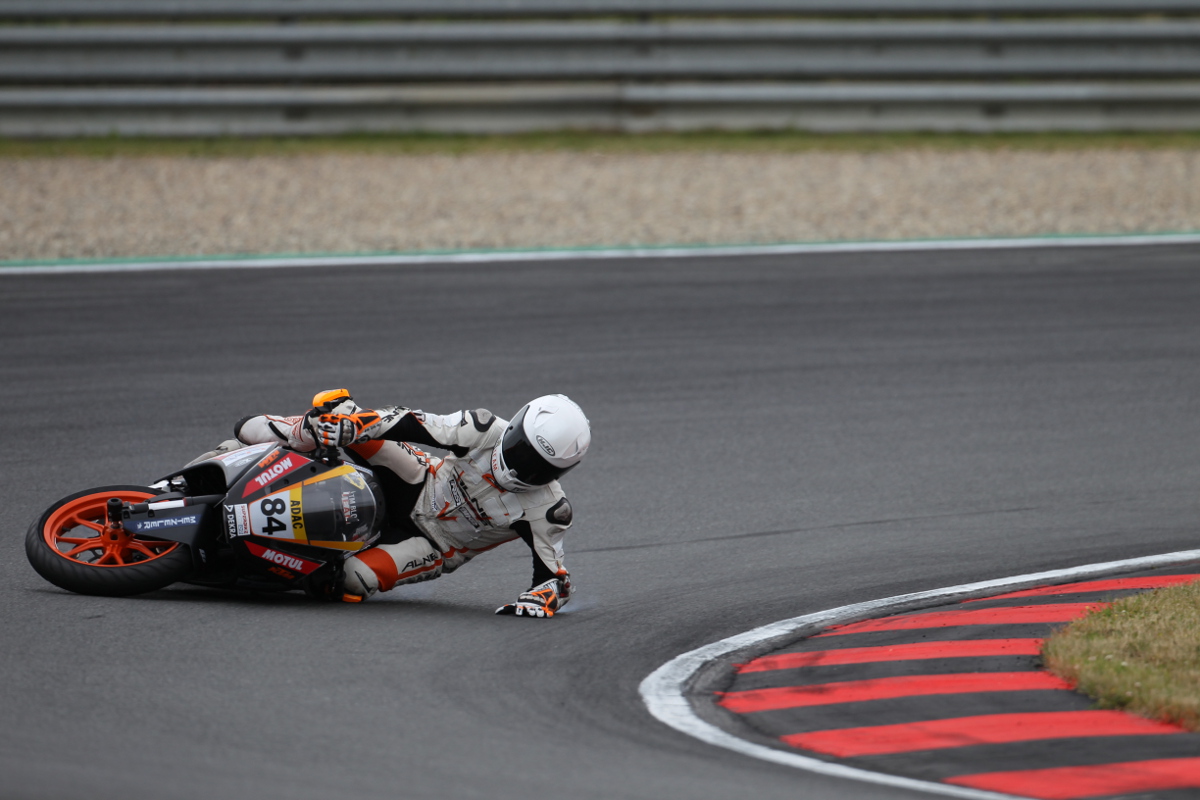 Tim, who seems to easily take soil contacts, did not even bruise when he crashed into the gravel. Even the bike, which apparently withstands crashes with a few scratches, was only slightly damaged: mechanic Soeren just had to replace the left handlebar and protection guard along with clutch lever and footrest.In addition they calculated a fuel consumption of a quarter litre per lap. For the 15 lap race 3,75 litres were poured into the tank, plus 1,5 litres for warming up and the warm up laps. 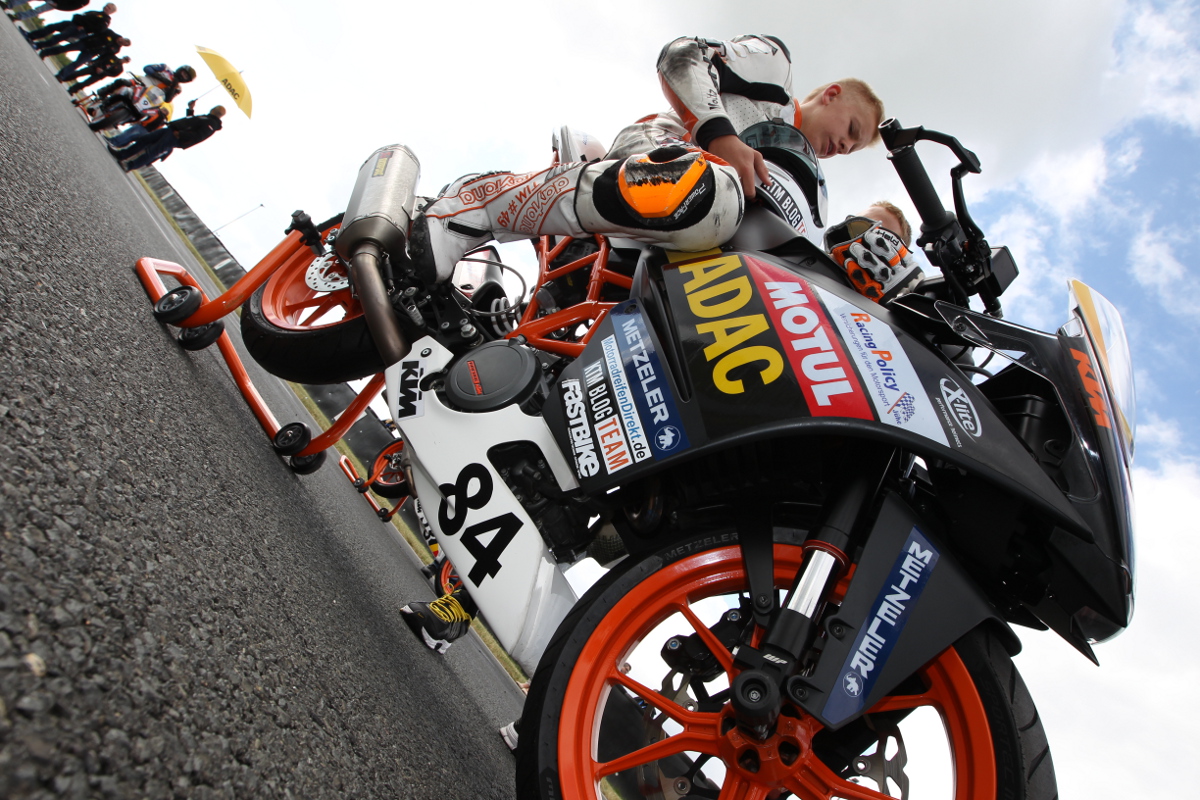 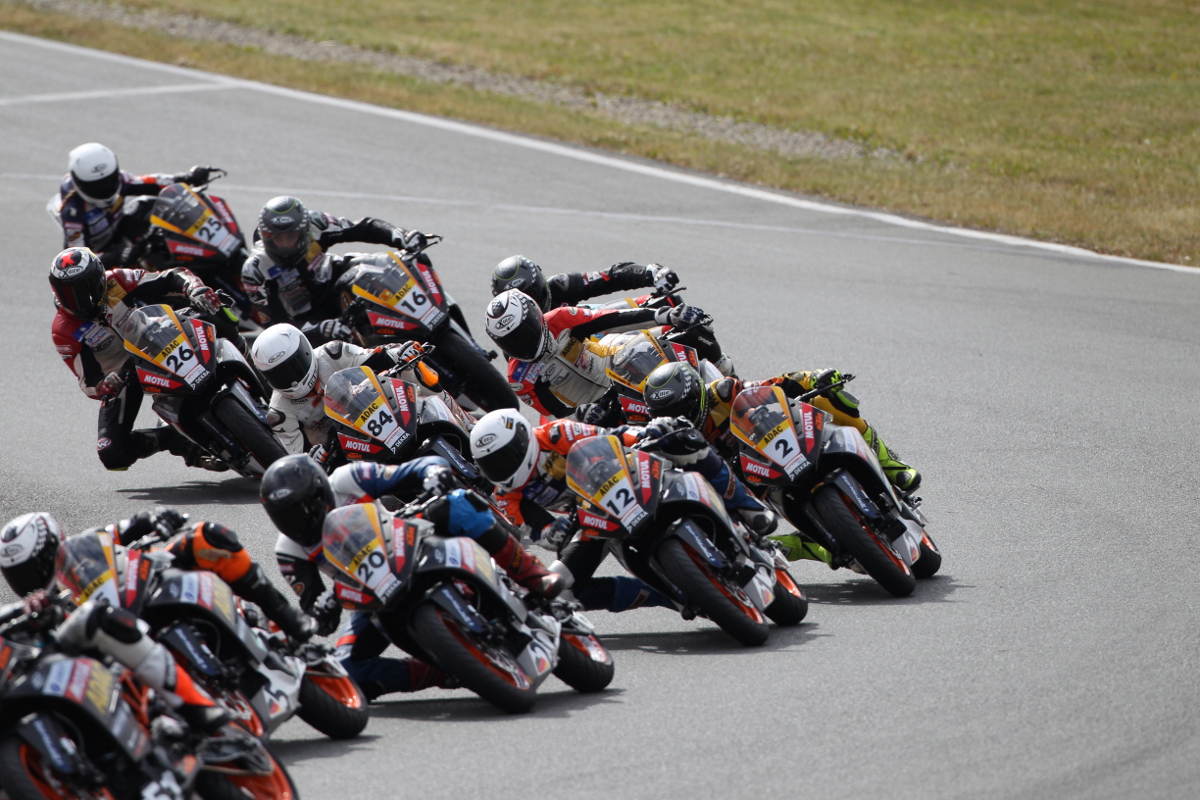 On Sunday, the race started smoothly; from 15th position in the first lap Tim battled in a hard-fought group of eight riders which constantly changed positions; sometimes Tim moved two positions up and then one down again. In the front four riders gained some ground on the competitors, but their wantonness didn´t last for a long time. Opening race winner Lukas Tulovic and Matthias Meggle crashed as well as Tim Georgi some laps later. In the lead, Norick Stelzer touched a slower rider and crashed into the gravel and could hardly hold back the tears of disappointment. 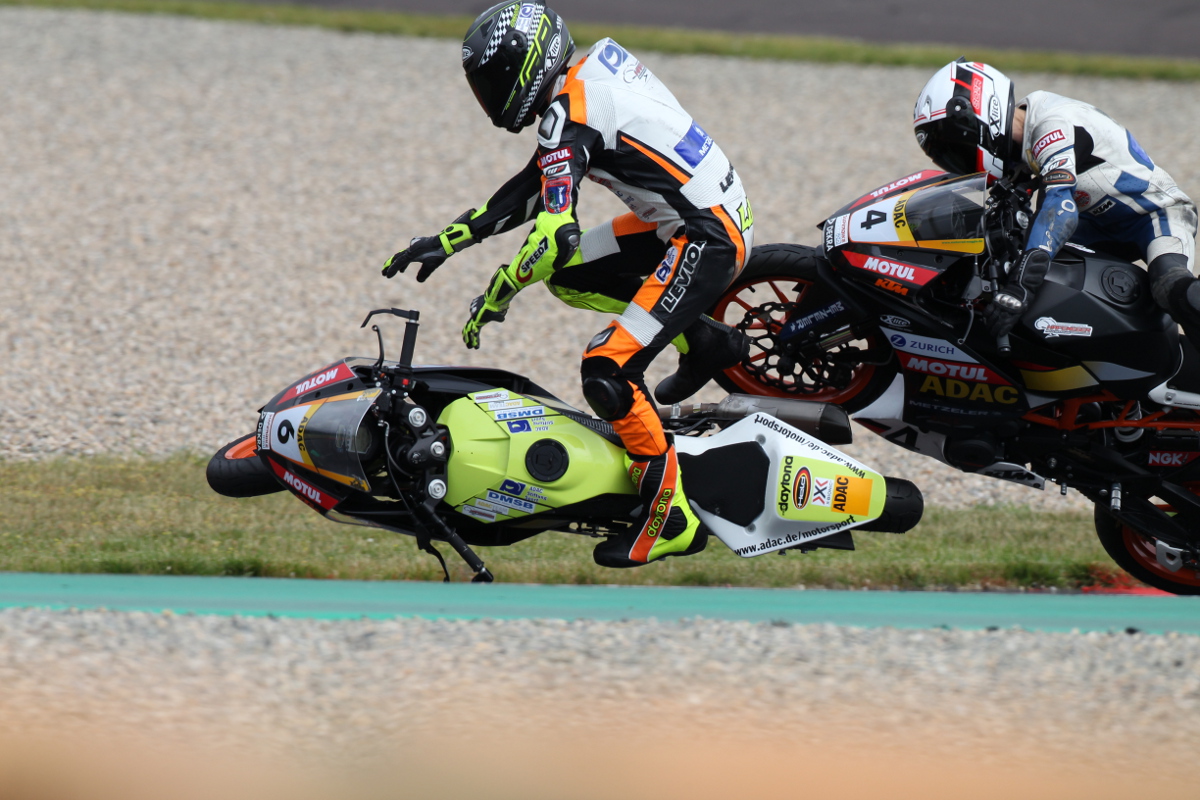 Turbulent scenes could also be observed in the chase group, where Kenny Leibold finally prevailed against Maximilian Sohnius. With some distance Hagen Wiedemann followed in third position. Tim Holtz fought like there was no tomorrow and got the full adrenaline rush in the dense ruck of bikes, including outbreak maneuvers, fairing contact, slipstream fights and slides. Coming more and more to the front, Tim crossed the finish line in sixth position after a remarkable final spurt. After the race he fell all-over himself: “How cool was that?” 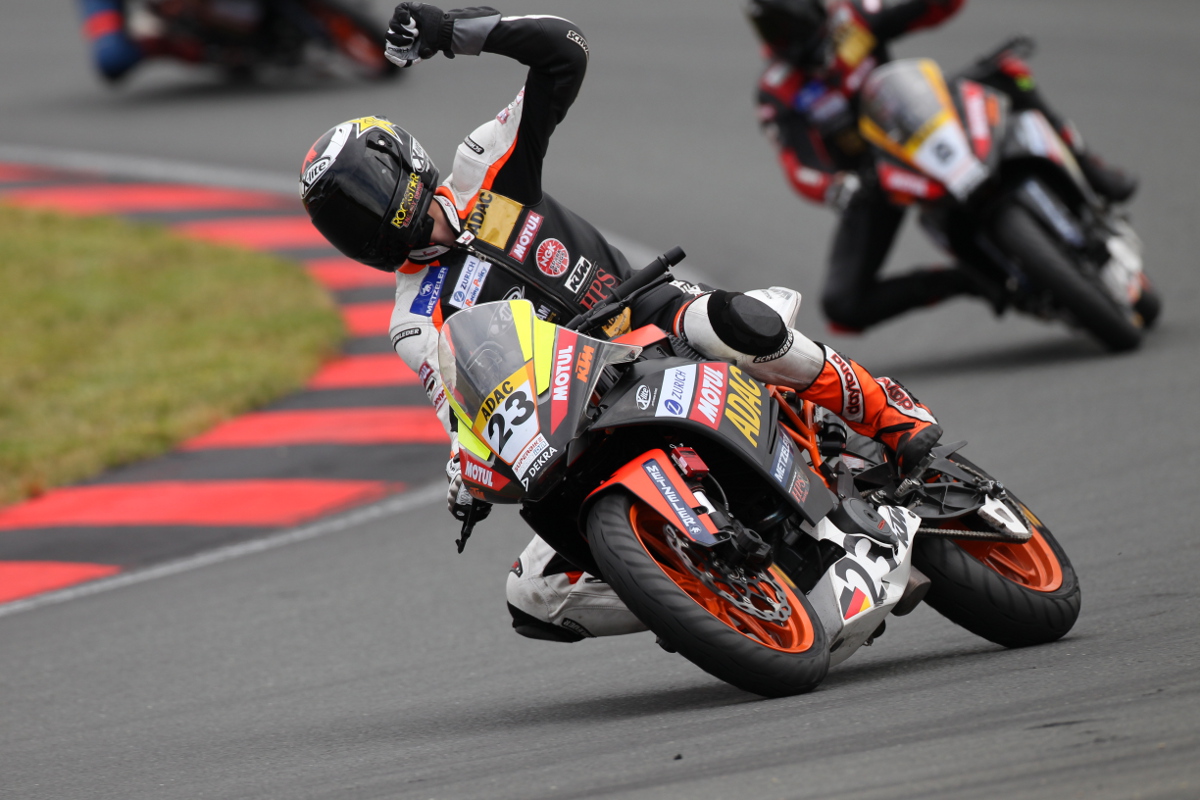 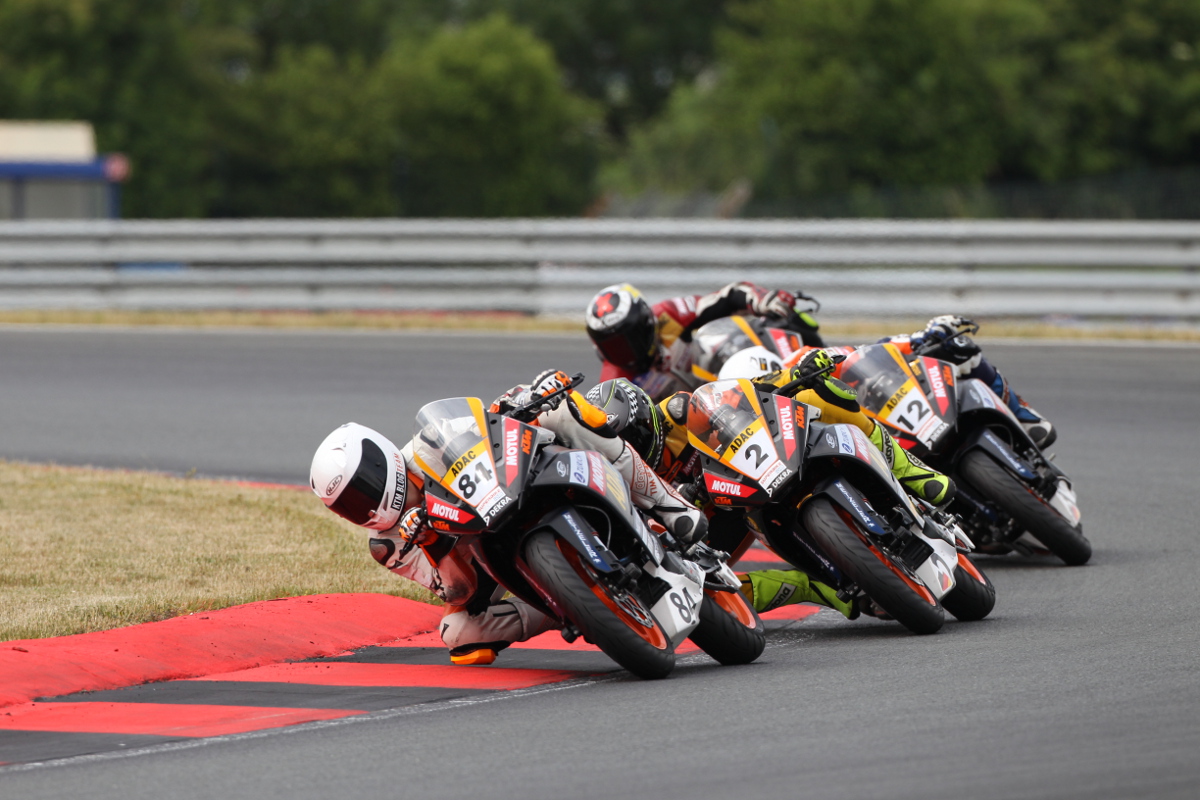 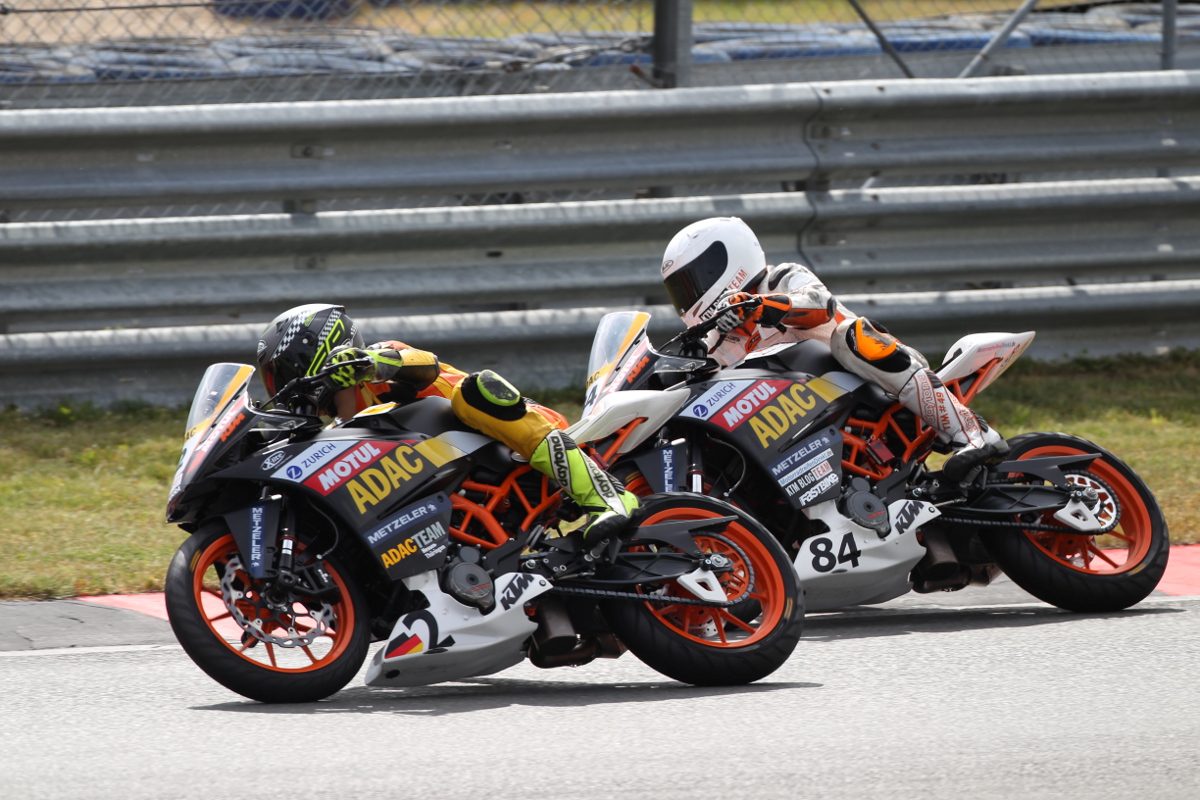 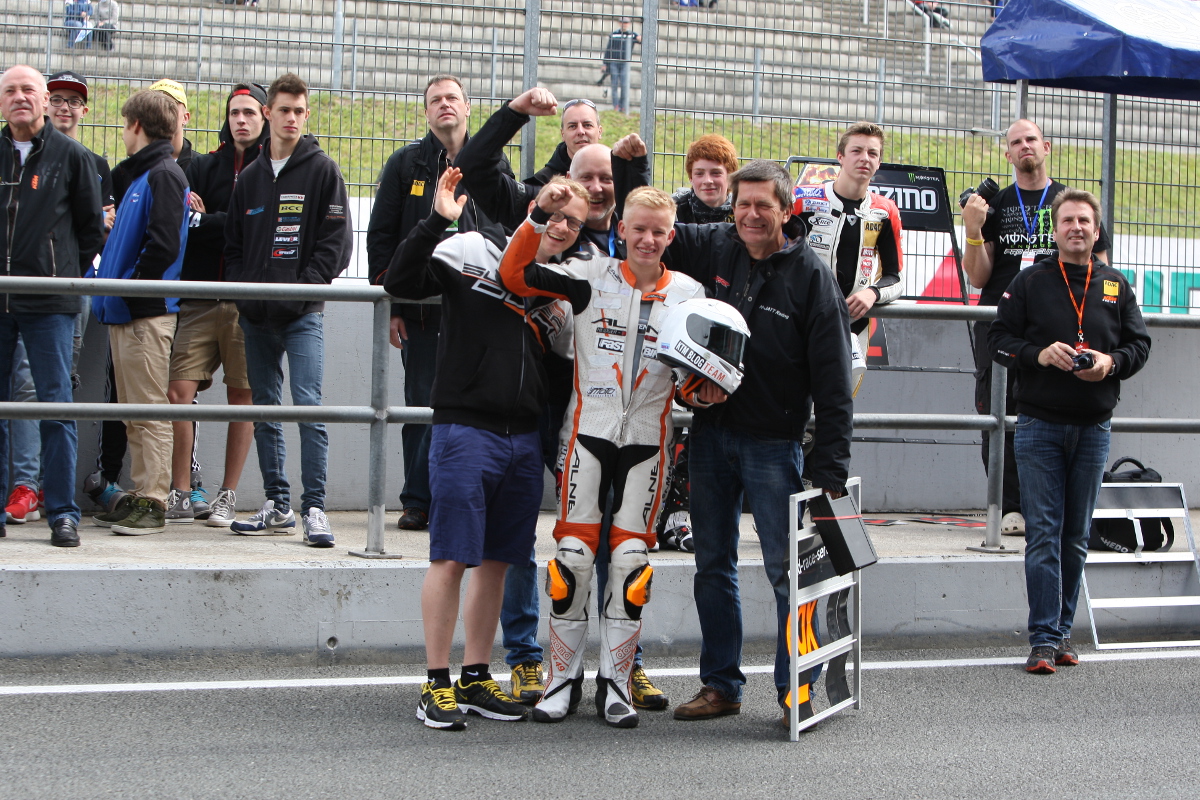 In general everything worked out smoothly at the first guest appearance: perfect organization, advice from all sides, trainings, track inspection and joint early-morning exercise. On Friday evening, all Cup competitors came together for a nice barbecue. New friends were made in no time, especially since young racers always get along well with each other. With the various activities, boredom did not have the ghost of a chance: hanging out, playing table football, watching the World Football Championship on a big screen in the ADAC Junior Cup team tent or doing countless wheelies on the bicycles. 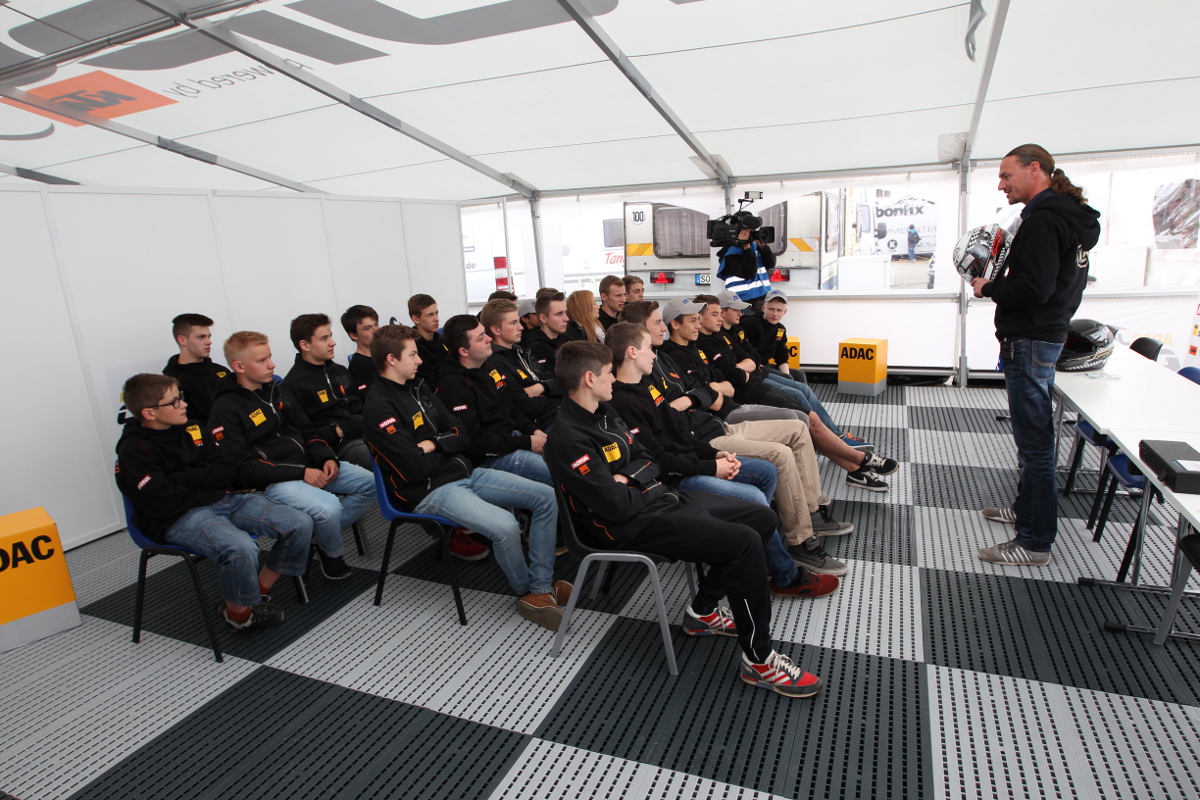 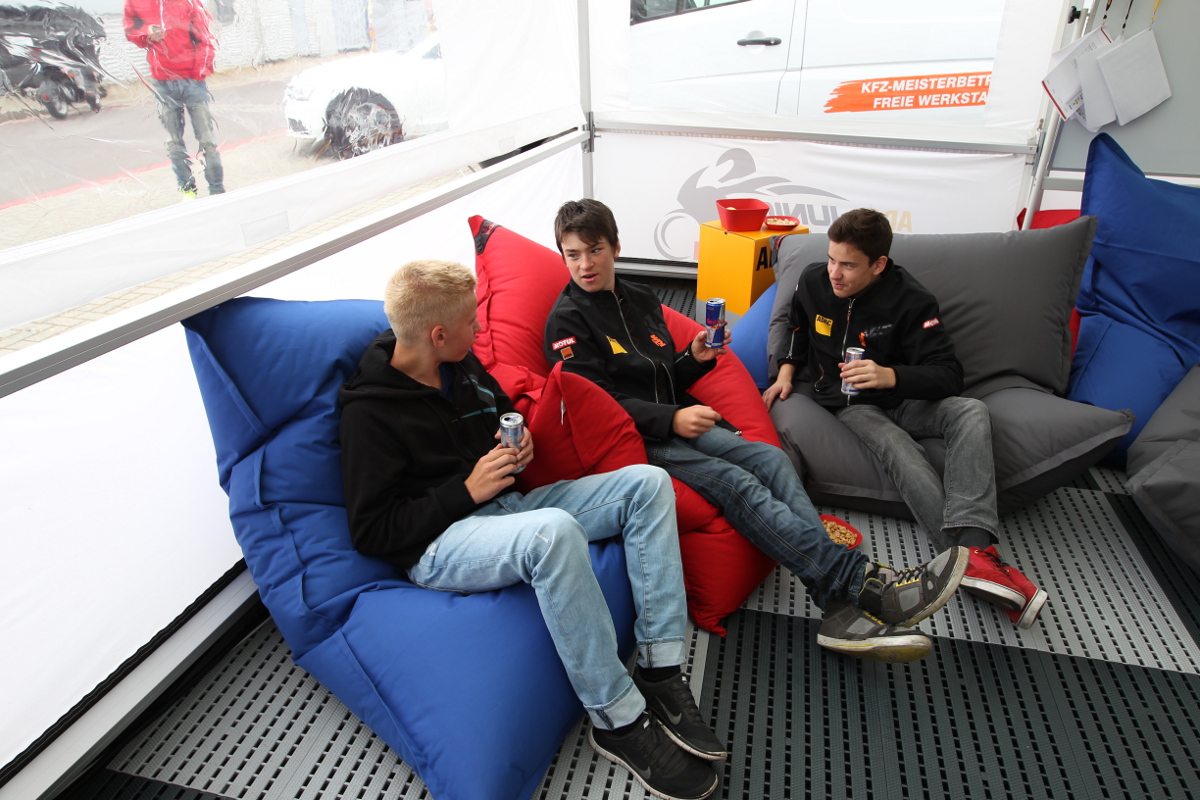 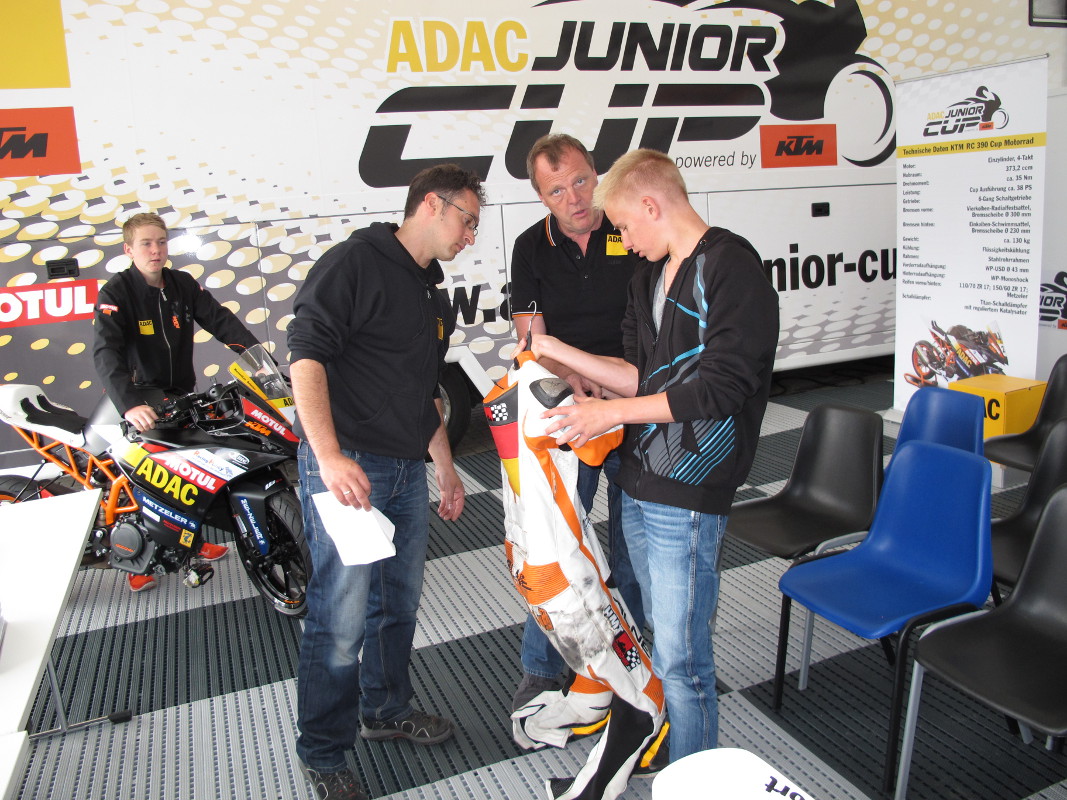 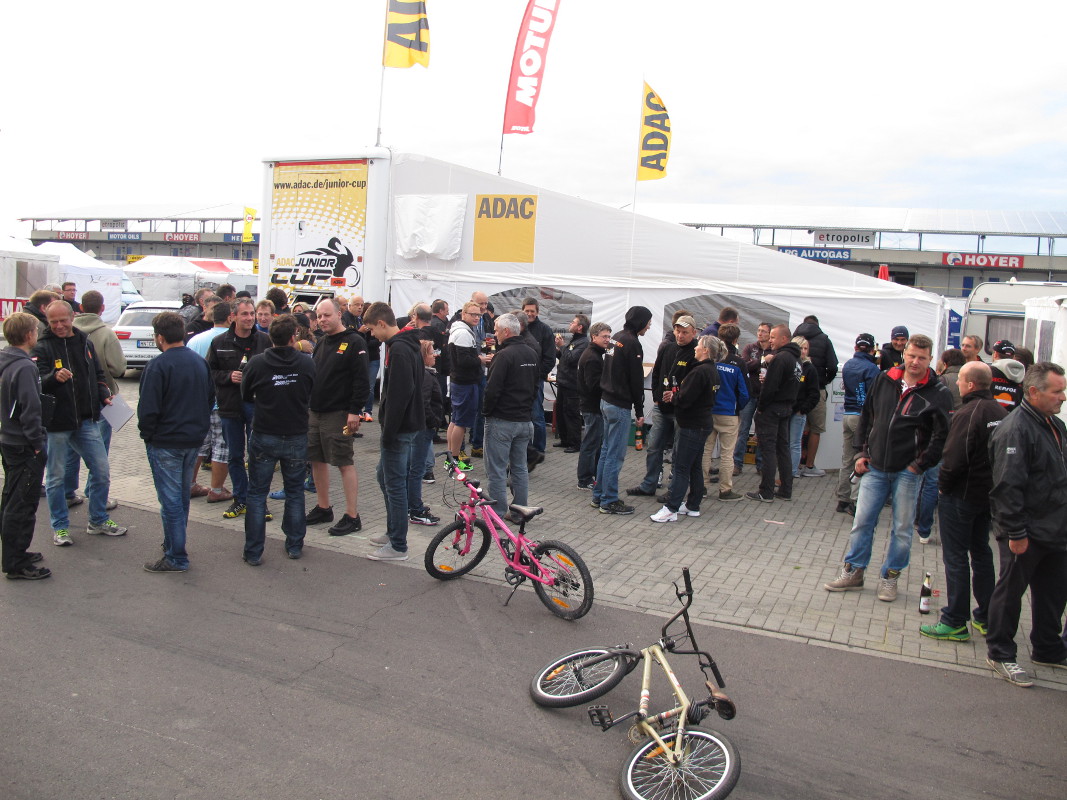 After the race the bike was cleaned and all personal sponsor stickers were removed and the bike was returned to the Cup promoters. Mechanic Soeren did only dismount the hump seat and gave it to Tim Holtz as a souvenir; since it was scuffed at the sides it would anyhow have been replaced. A week prior to the guest start in Oschersleben, Tim Holtz, who turns 15 on 12th July, passed his moped driving test. In the future he will be cruising around or to school with a 1,5 hp Zündapp bike.

What´s next on his sport agenda? Strong stuff: in August, Tim Holtz will compete two times in the Conti Super Duke Battle with a KTM 1290 SUPER DUKE R. Quite possibly, that there could be expected similar action.