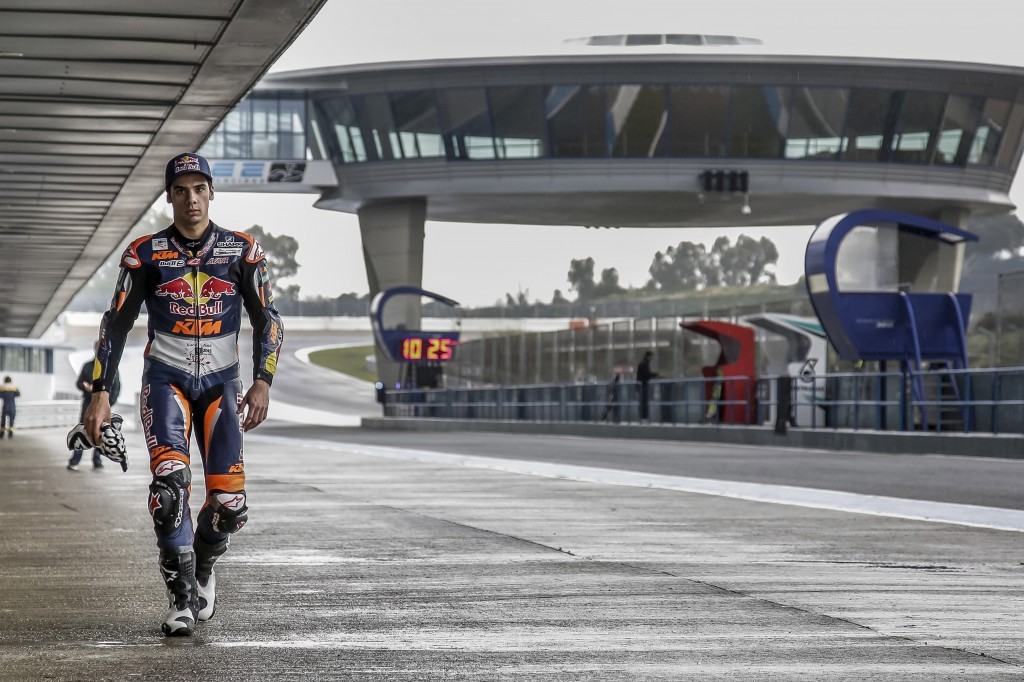 From almost 200mph to studies of tooth decay: MO brings an unusual lifestyle blend to Red Bull KTM but the Ajo crew could have landed themselves another title contender – meet Miguel Oliveira. 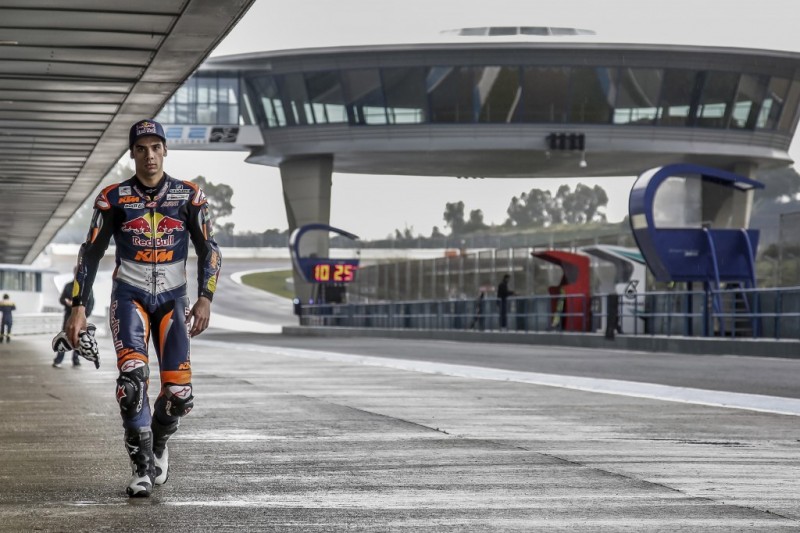 Sandro Cortese, Luis Salom and Jack Miller have all left some hot boots behind in the factory Red Bull KTM Ajo team in Moto3, and trying the footwear for size in 2015 will be 20 year old Miguel Oliveira. The youngster has sprayed podium champagne for two different manufacturers in the past four years and was a previous target for Team Manager Aki Ajo before the dedicated Fin finally snared his man for this season to replace the MotoGP-bound Miller. If Rossi is the ‘The Doctor’ then Oliveira could be the ‘The Dentist’. Or at least this is how he spends his spare time when not sharing centimetres of track space. The Portuguese is endlessly studying and is a busy guy.

Those who have kept a watch on ‘44’s progress – Portugal’s sole threat for MotoGP glory – know that Oliveira is a potent threat in what is sure to be another frantically contested battle of the 250s this year. We decided to give Miguel a call after a day of work at the Jerez test last week to find out a bit more about his settling-in period with Orange.

How much time have you clocked on the race bike and how did it feel being on it the first time?
“This is the eighth day and tomorrow the ninth. We don’t ride for a full day but that’s opportunities we’ve had this pre-season. As for my impressions, well, it is a completely new bike for me, and having that trellis frame means that it definitely feels different! The handling is amazing and you can brake late and put it into the corners so nicely. It is smooth to ride, which is important over the full race distance because you have to be comfortable and get through the gears and not be worried that something is going to fail. This bike gives me that security. Engine-wise and going 500rpm less doesn’t seem to have affected it much compared to before and this is a good achievement. I’m happy.”

With the Mahindra for the past two years you were in development as well as racing so will it be a change for you to jump on machinery that has been going for the title since the dawn of Moto3?
“Yeah, when you are developing a bike and you are on top then you are responsible to a degree but when you get on a bike that has already been winning so many times and also three times the constructors championship then it is quite an important move. I don’t feel pressure but I am confident because I know I have the bike to win. It is a matter of moving in the right direction and getting it done.” 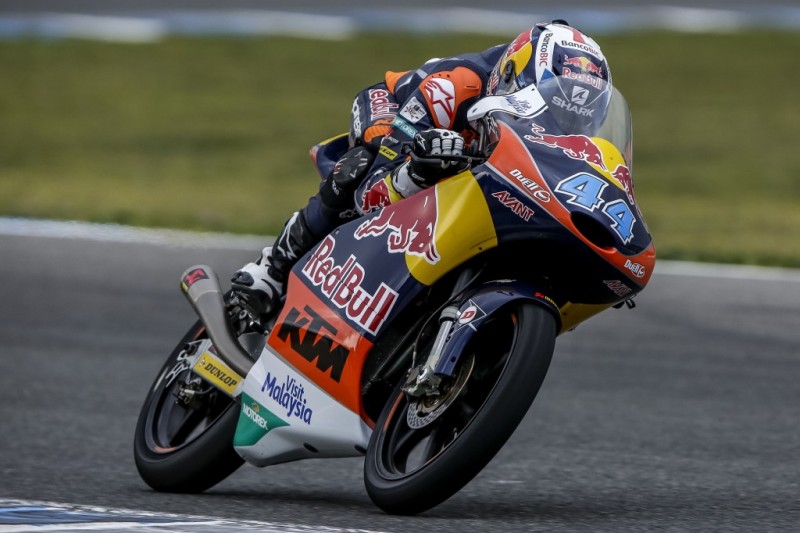 How long did it take to make the KTM ‘yours’? What was the biggest change you had to do?
“It was easy. I thought I would have to struggle a bit more to make the bike mine but it was pretty simple. As I said before the bike is very easy to ride and it doesn’t take much time to adapt. The biggest change was the braking point. The way I brake is still not so perfect for this bike. It requires a lot of weight on the front and you have to play a lot with the brake. I used to ride with both – front and rear – and on some corners this now changes a bit. It is not a big deal but when you are riding at this level every detail counts and you have to be perfect in every aspect.”

Honda upped their game in 2014. Have you been told about improvements to the KTM race machine for 2015?
“Yeah the bike is different and built in a different direction compared to last year. The engine is of course new and because of the RPM limit. The frame is not so different but they have taken another path in terms of the geometry. All I know about the Hondas and the other constructors is that we have to beat them this year! We need to do whatever it takes to be at the front.” 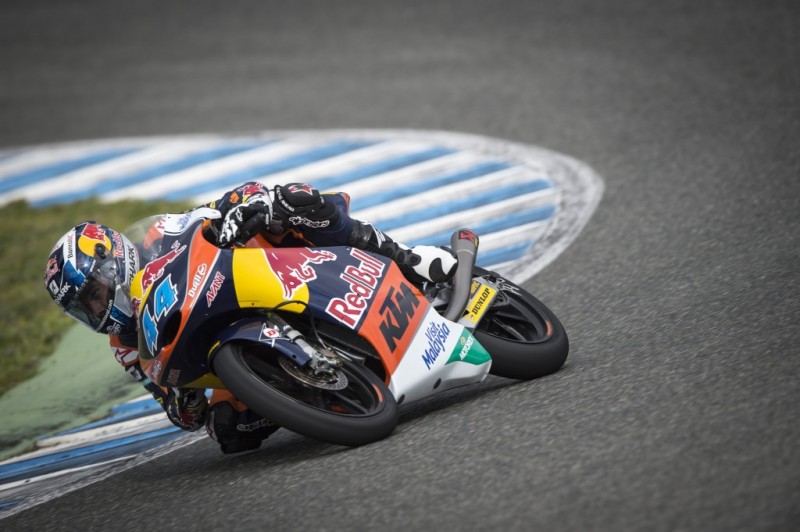 How does it feel to be part of that team? It is a real factory effort with a direct and close link to Mattighofen and the rest of KTM where there is a lot of success in terms of Motocross, Rally, Dakar, Supercross?
“Oh, it is amazing, you know. Just to be in the pit box and to see the information that comes out and how much you can learn. KTM has a lot of experience when it comes to motorcycle racing and it feels good to be surrounded by the best people and it’s an honour to be able to learn from them. It is definitely something that I know will be good for me in the future. Sometimes when you are struggling this knowledge and support can help. I’m on a good team!”

Is the timing of the move good for you? You’ve been in Moto3 for a couple of years now and have four podiums to your name; at least one trophy for the last three seasons in a row?
“Yeah, for sure. I am not a veteran yet! I’m still young but I’ve been in Moto3 for four years now – or maybe five – and that makes you want to win. I’m doing things a bit differently now and I have grown up. I’m more mature and I have learned from the mistakes I’ve made in the past and this is helpful in looking towards a championship. It doesn’t mean you can make a mistake on the track but I feel I have that experience to look at the bigger picture. It is a matter of being focussed at every race and having good morale. Keeping up the pace.”

It seems that you have two spotlights on you. One because of your nationality and two because you are taking on a challenge that has been met by riders from Cortese to Miller each year. High profile guys. I know you say this doesn’t bring pressure but will it be like a new ‘ball game’ for you?
“Yeah … the first pressure from my country I’ve already had for a long time so this (KTM) is a new kind of pressure. I haven’t done a race yet but I feel that the expectations are very high on me. It makes me work harder. I guess the pressure will come when I am – hopefully – going for the championship. For now you cannot think too much about the pressure of being with a top team because it doesn’t make sense if you want to be a top rider! The transition here wasn’t such a big problem because I came from a factory team last year where there were some good people. The relationship we have here now can only get better as the season goes on.” 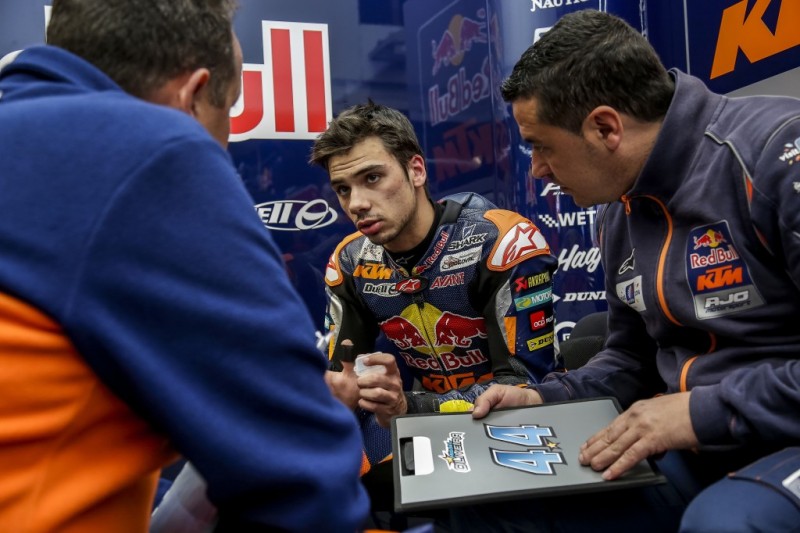 A few rapid-fire questions. Favourite track?
“Oh, I don’t have a quick answer to that! Honestly I like all the tracks. It is hard to pick a favourite one but you do tend to remember the ones where you have good results so I will say Assen.”

Favourite sport aside from racing?
“Football.”

Benfica or Porto fan?
“Benfica! I’m from Lisbon so it has to be them.

” What does ‘44’ do when you’re not racing?
“Unfortunately my time is really restricted because I am still studying. I’m at university and it takes a lot to co-ordinate both jobs and it is hard task. I try to enjoy my physical training and doing things like Motocross and Supermoto. Then there is running and cycling with friends and the normal stuff that a kid does like going to the movies or going out sometimes.”

So a good few years left ahead at university?
“Yes, I’m studying medicine and specialising in dentistry. It is five years! I’m just finishing the first now. It is definitely something I want to finish and it is a goal that I have … but I am going slowly because I am taking the time to enjoy the bikes.”