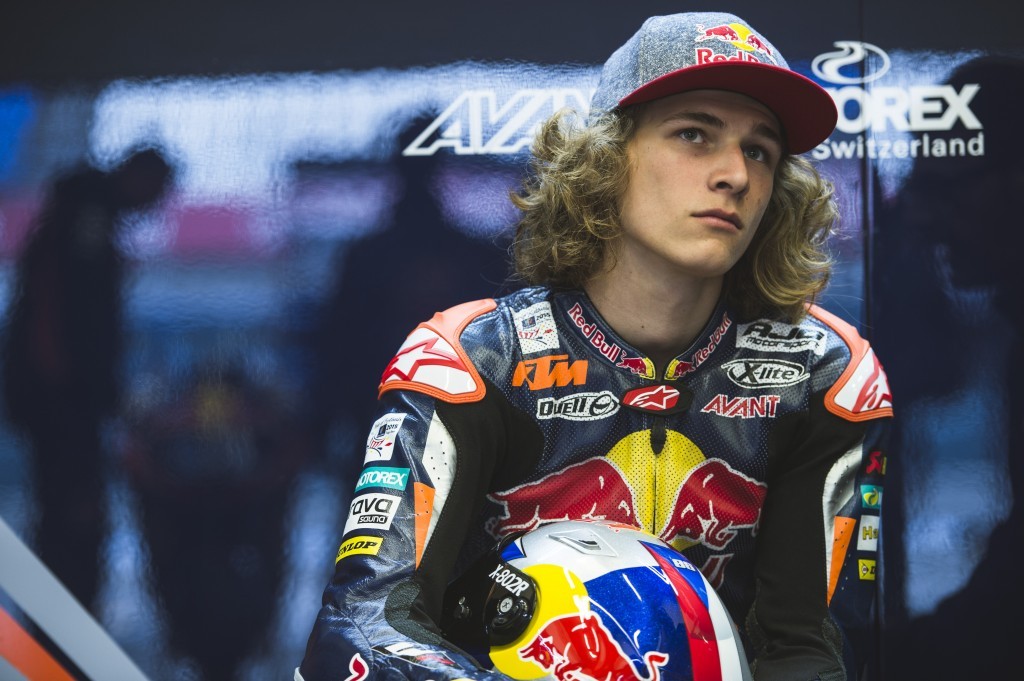 At nineteen years of age Czech Moto3 racer Karel Hanika has to grow up quickly. The grin, locks and carefree demeanour of the youngster was given leeway in 2014 to learn the ropes of the unforgiving entry category in MotoGP, but as part of the Red Bull KTM Ajo crew for a second year the spotlight is getting warmer for the former Red Bull MotoGP Rookies and European Champion.

‘98’ has already achieved his best GP finish this season with a seventh position in Argentina and came tantalisingly close to a podium at Mugello in Italy. We caught up with him at Barcelona recently – almost a second home GP (and maybe the first if the rumours over the Czech round at Brno falling through become true) – thanks to his residence in Spain and not too far from the team’s workshop at the disused Derbi factory close to the Montmelo circuit. 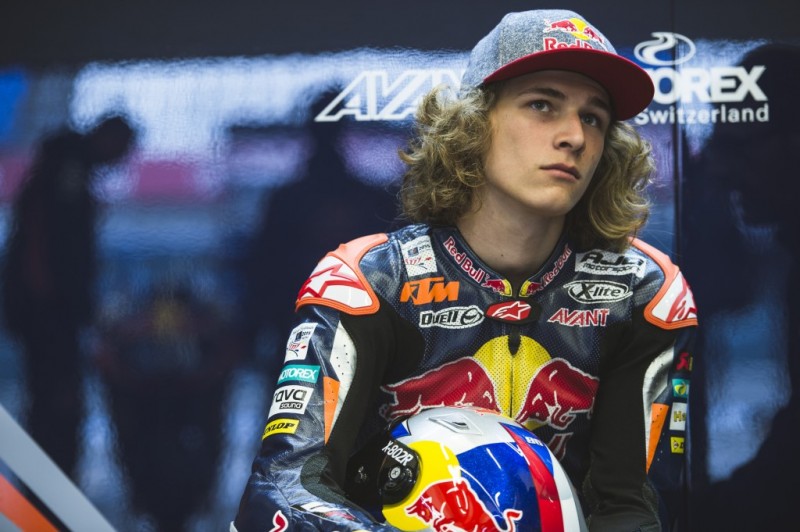 So, second year in Moto3. They say the first should be about learning … so is life now a little easier?
“I wouldn’t say easier because last year I had to learn the circuits and the championship – like you say – but now I have some things that I need to do and that’s results. So far it has not been too bad. To answer your question though I would say it is a little bit easier to ride this year!”

Is that learning process still happening for you?
“Definitely. Last year I basically concentrated on the tracks and trying to do things well. Now we are trying to go higher with the limit and are pushing the lap-times more. I can pretty much do everything by myself now and the experience I took last year is helping me a lot. I feel it is getting better race-by-race. I can feel the work paying off and each GP we are closer to the top riders. I really think we will be at the top soon.” 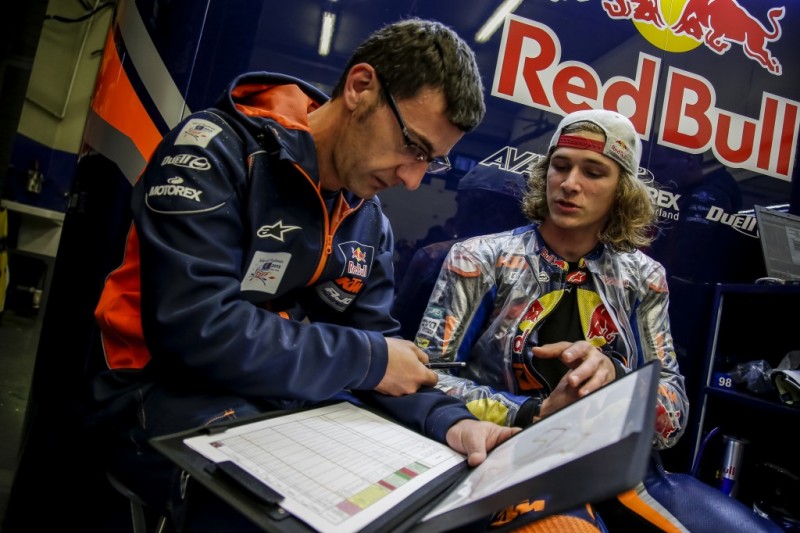 Last year Jack Miller was fighting for the championship, which I guess allowed you just to get on with your own progress but now is there pressure or expectation to be getting podiums and top five results?
“Exactly. It is like that. Last year I didn’t need to worry about results and many times I pushed over the limits. Now we are better, like at Mugello where we lost a podium on the last corner but people could see that we were up there. I believe my time is coming step by step and if I keep giving 100%.”

What about that pressure though? If you look at a rider like Arthur Sissis – to pick a name – then you cannot afford to get it wrong at this level for long?
“I know Arthur so I know a little bit about that situation and he was a good rider who was on the podium but unfortunately he’s not in the world championship any more. I hope my situation is a little bit different. OK, the results have not come yet but I hope people can see that I am giving 100% and working a lot for one thing. For the last few GPs I am more or less in the top ten every session and I think this is a good thing. I need to be a bit cleverer in the races and stay calm. Of course these are just words and you need to see and be able to show those results on the paper.”

What was the team’s feedback after 2014 and their comments for this season?
“Of course there is pressure but everybody here is trying to support me and push me in the right way. I am doing everything to be a top rider and I train hard to be able to be at the front. After the first two races we were not so happy and also my own work on the track was not that good. So we sat down and talked about working from the first minute of the first session to the last minute of the last. I have changed my approach in these last few races and I can honestly say I have done the best job of all the riders around me … it is just not on the paper yet. We need that last step.” 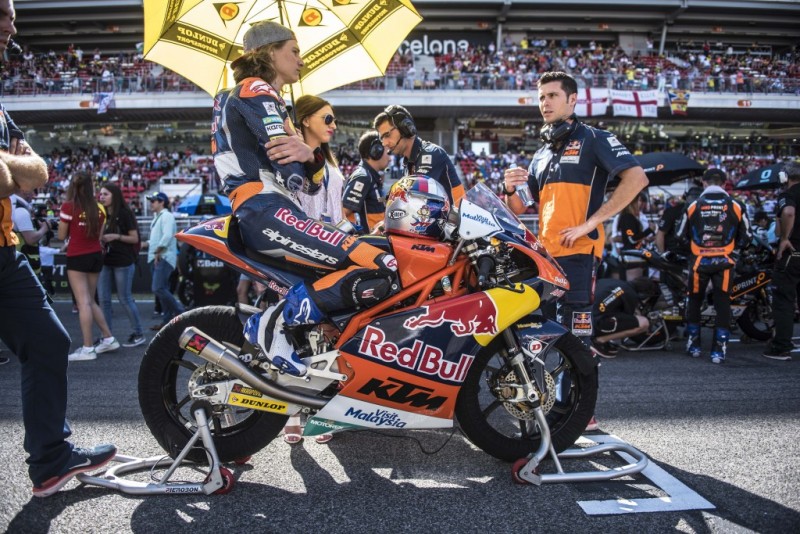 You are only nineteen … but you are not the smallest guy for Moto3. Do you need to be careful with your diet and other aspects of day-to-day life?
“Definitely! There is not too much you can do about that (being tall) I think it is just me and one or two others who are tall for the class. It does make life a little bit harder and especially because the KTM is a small bike that is really good when it comes to handling; it feels even smaller for me! Sometimes it can be a bit tricky to tuck in. I try to do everything to be well prepared and to feel comfortable. Just by trying to relax everything seems to be working so far. Body weight is also something you cannot do much about. I have almost no fat so I cannot cut off a leg! I have to try and hold a weight. The power of our engine is now really good and even someone as tall and heavy as me can be up there in the top speed charts. I can’t really complain. Having weight can be better for putting the bike into the corners but then has its disadvantages in other places.”

How heavy are you?
“Around 65 kilos; one of the heaviest I think.” 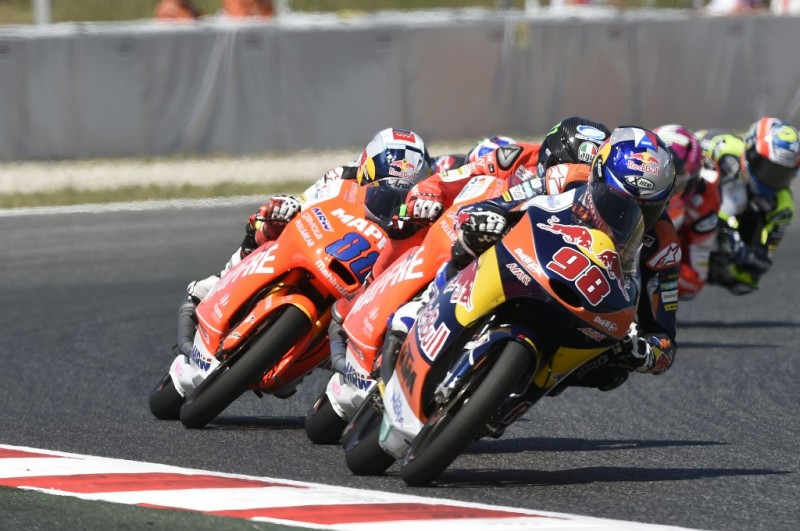 Were you missing that engine power in 2014 because the Hondas made a step up didn’t they?
“It is not easy to be competing against Honda but KTM have done some great work. Last year I was near the bottom of the list for top speed sometimes but now the power we have found in the last few races has been really good. We can easily stay with the Hondas and for sure be faster, not just for me but all the KTM riders. We also have the advantage of our handling.”

Did you change anything for 2015 in regards to your work away from the track?
“I moved to Spain before my first year in the world championship and then this winter I changed my training and tried to focus more on conditioning. We basically do six days a week and many times twice a day. It is pretty intensive and it helps me in the races by being able to concentrate for longer and to feel less tired.”

So what kind of work is that?
“We do quite a lot of cycling … with the mountain bike sometimes but mainly on the road. And also running. We also do a lot of Motocross and I would say that this is the best training you can do. You can build up some important muscles groups from that. I’m not fast at Motocross but I try to do thirty minute motos for bike time. We also ride some Supermoto. We go to the gym and generally do many different things. I think this routine is not only good for when you are riding but helps to keep your mind clear.” 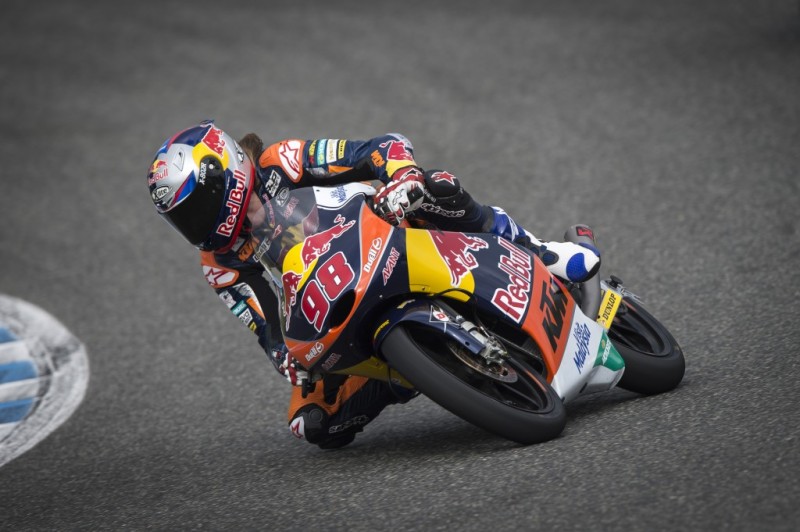 Being a KTM factory rider you have a nice choice when it comes to Motocross bikes?
“Ha! I would like a two-stroke and I was thinking about the 150 but I have the 2015 250 SX-F. For me it is the best bike because I’m not so experienced in Motocross but I am improving and I really like it sometimes! I have also tried the 350 and an Enduro model but the 250 is good for me.”

How do you see your profile now? Are you still shooting up as a Grand Prix rider and do you think the fans, media and everyone else think this as well?
“In the Czech Republic our sport is not number one – that belongs to football and hockey – but I do think the number of fans is increasing and you can really feel the feedback. They appreciate the work you are doing. Of course all fans are different but to hear them talking about you and supporting you every time you have a race is really nice. It helps push us to the front. There are only three of us here (in GP) from the Czech Republic but I still like that. My position in the world championship is better this year because I am able to be nearer the front. I’m really liking MotoGP.”

Lastly, what is it like to be in Moto3 because the GPs seem very crazy sometimes with the group so close and the final positions going down to the last metres of the race?
“You have to keep calm! If you look at a race like Mugello or many from last year then you can have up to fifteen riders within two seconds of each other. It is so close. I think Moto3 is the best that you can watch, and also ride. If you have many riders on a similar level and with reasonably similar equipment then it is really interesting. There are only small things you can do to be better than the others like gaining one meter on braking or one more second on acceleration. There are so many good riders here now and I can say that there wasn’t one race where I was bored this season or the last. You are always fighting and having so much fun … and this is why we are here basically.” 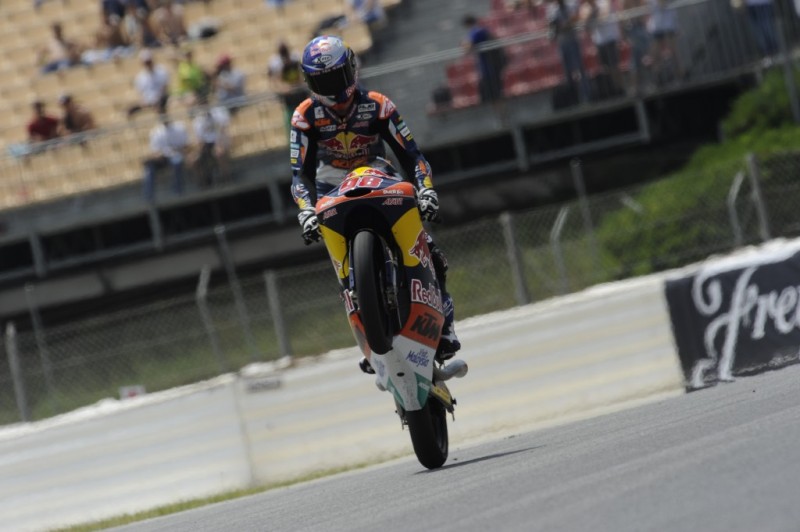 118 Responses to Interview of the Month: Karel Hanika talks pressure, fights and motocross