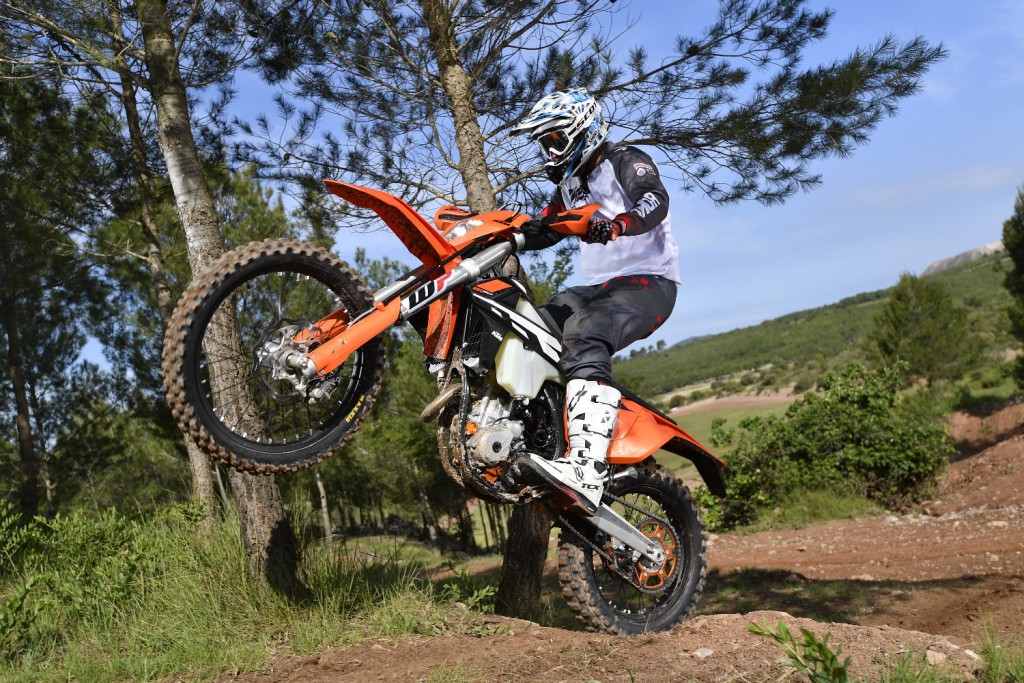 Freelance writer Llewellyn Pavey is no stranger to Enduro events. Having managed to complete his Dakar debut in the first privateer ‘Dad and lad’ team in 2015, plus enter numerous events at club and national level over the years in Rally and Enduro, test ride for various magazines, while also becoming a full time journalist and camera guy, Llel knows his stuff about offroad bikes. The 24-year-old Aussie-come-Welshman tested out the all-new KTM Enduro range at the international launch in Spain and gave the KTM BLOG his low-down.

The 2017 EXC model launch sees a total of eight entirely new bikes roll onto the showroom floors. It’s a project that KTM have been working on for years. The direction the bikes would take was hinted at in the dramatic re-designing of the SX models last year. Those bikes formed the basis for KTM’s best ever year in Supercross and now that technology has trickled down to the Enduro models. For model year 2017, KTM presented a range of machines that are lighter, more powerful and on paper, more balanced. It looks like this is a good time to want a new bike. The Tech Bit
The quantity of technical changes to the EXC range is incredible. From the ground up KTM have re-designed almost everything. A new frame, new suspension, new plastics, new ergonomics and all new engines. Some bits still remain but for the most part all the models have very little in common with last year’s bikes.

The changes mean every bike has lost weight. Some of that comes from simple things, such as the now standard lithium battery or the removal of the kickstarter, but a decent proportion of the weight loss is from other areas. The all-new forks and shock, throttle body and redesigned swingarm are big contributors. The weight loss ranges from around 2kgs on the 250 EXC-F right up to more than 5kgs on the 450/500 EXC-F.

Each bike has been ‘mass centralized’ too. The crank has moved position in the engine and the exhaust is shorter and closer to the center of the bike. The end goal was a lighter feeling, quicker handling bike. The new engine designs also mean that each bike has more power than ever before, with KTM claiming the new models do so more smoothly and efficiently.

The 2-strokes have also been re-engineered from the ground up. By completely redesigning the motor, KTM were able to relocate the starter motor on the bottom of the cases. It also means they´ve been able to introduce a market first; a crank counter balance. The idea of counterbalancing the crank is to reduce the vibration of the 2-stroke engine. The claimed result is a 50% reduction in overall vibration in the 250cc and 300cc motors. 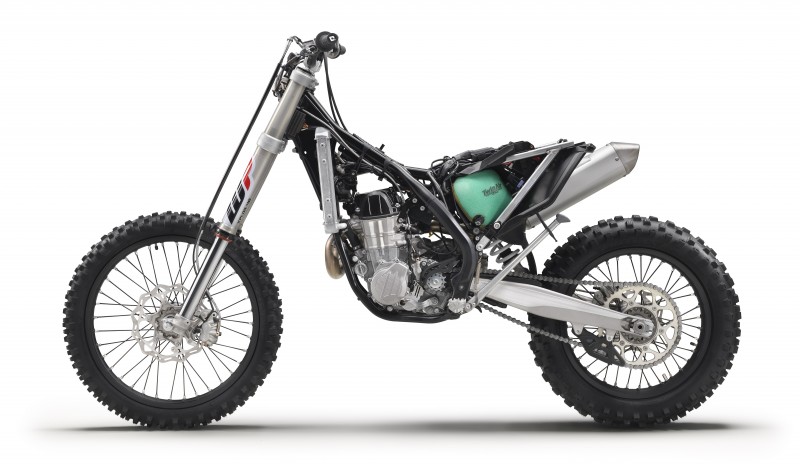 The Four Bangers
The 250/350 EXC-F platform has changed in two main areas; weight loss and engine character. Both bikes make a couple of horsepower more than before, with bigger gains seen in the torque curve, especially through the mid-range.

The fantastic engine and always quick handling 250 EXC-F has become nimbler than before but the change isn’t as dramatic as other models. The engine certainly rips, but a bigger difference is found in the 350 EXC-F. The 350 EXC-F has made an enormous leap in handling performance over the previous year. The mid-class machine is now as light as the previous generation 250 EXC-F, which means it turns on a dime and feels like it can be bossed. This shines through best on twisty single track, entering corners and in more technical riding.

The changes to the engines have created a much freer feeling character. The 250 EXC-F doesn’t appear to have lost the gentle, grip finding bottom end yet it has gained a smoother, more consistent pull in the mid-range. However, to really make the little EXC-F go you’ll want to rev it hard. The engine is more free than before and far happier to climb in the revs when you ask it to and that makes getting it up to a decent speed that bit easier.

Over the previous model the 350 EXC-F is now more like the 250 EXC-F than ever before. It’s free revving, extremely light handling and makes huge power when you rev it hard. It still has a lovely bottom end but the engine is happier to rev than in the past. The weight loss has made it handle like a E1 class bike. The previous model could be cumbersome in muddy or slippery conditions, especially alongside its little brother. Now it isn’t. It quite simply rides like a 250 EXC-F with a junk load more power. It’s a very different bike, but it’s also far better. 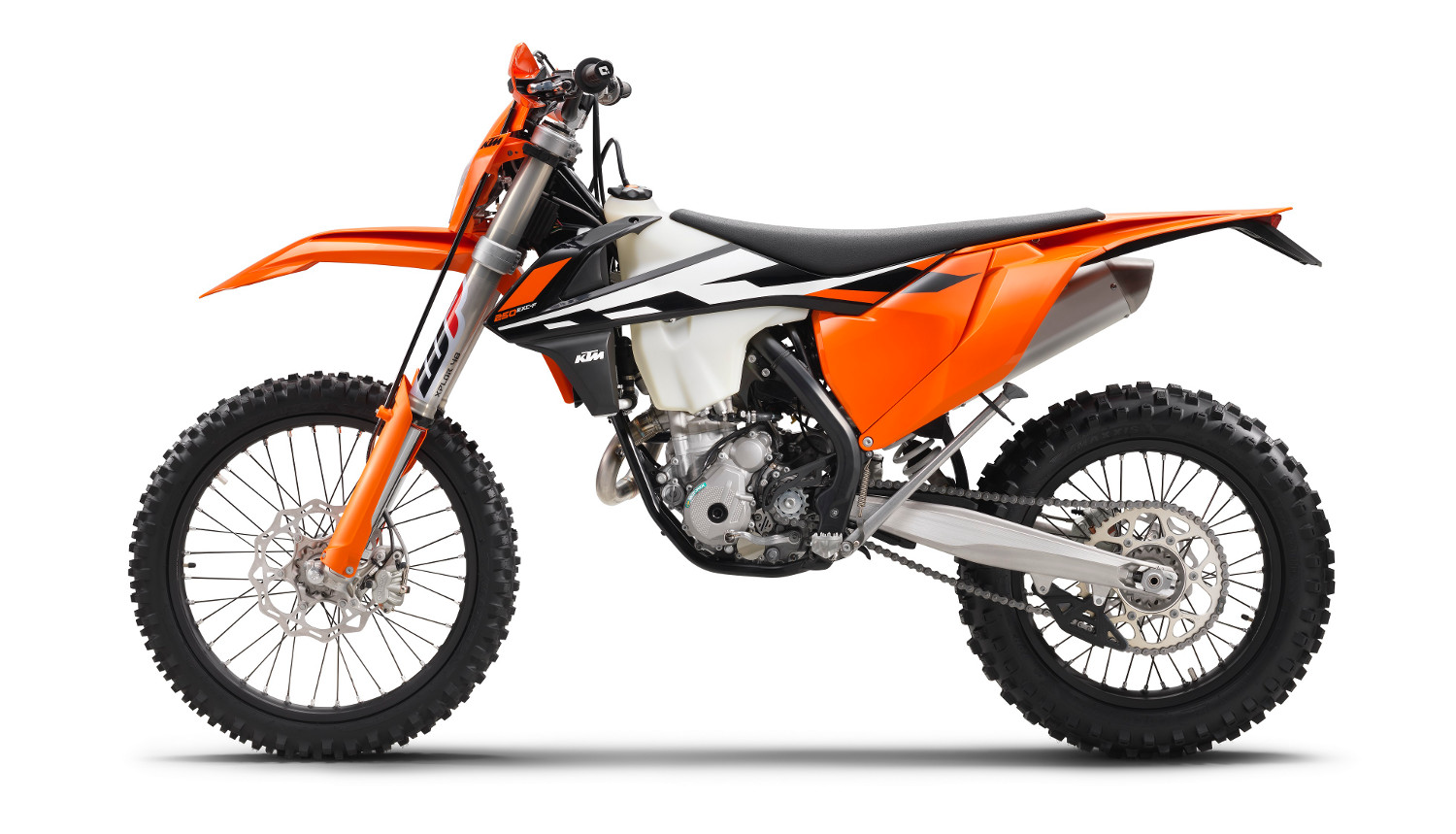 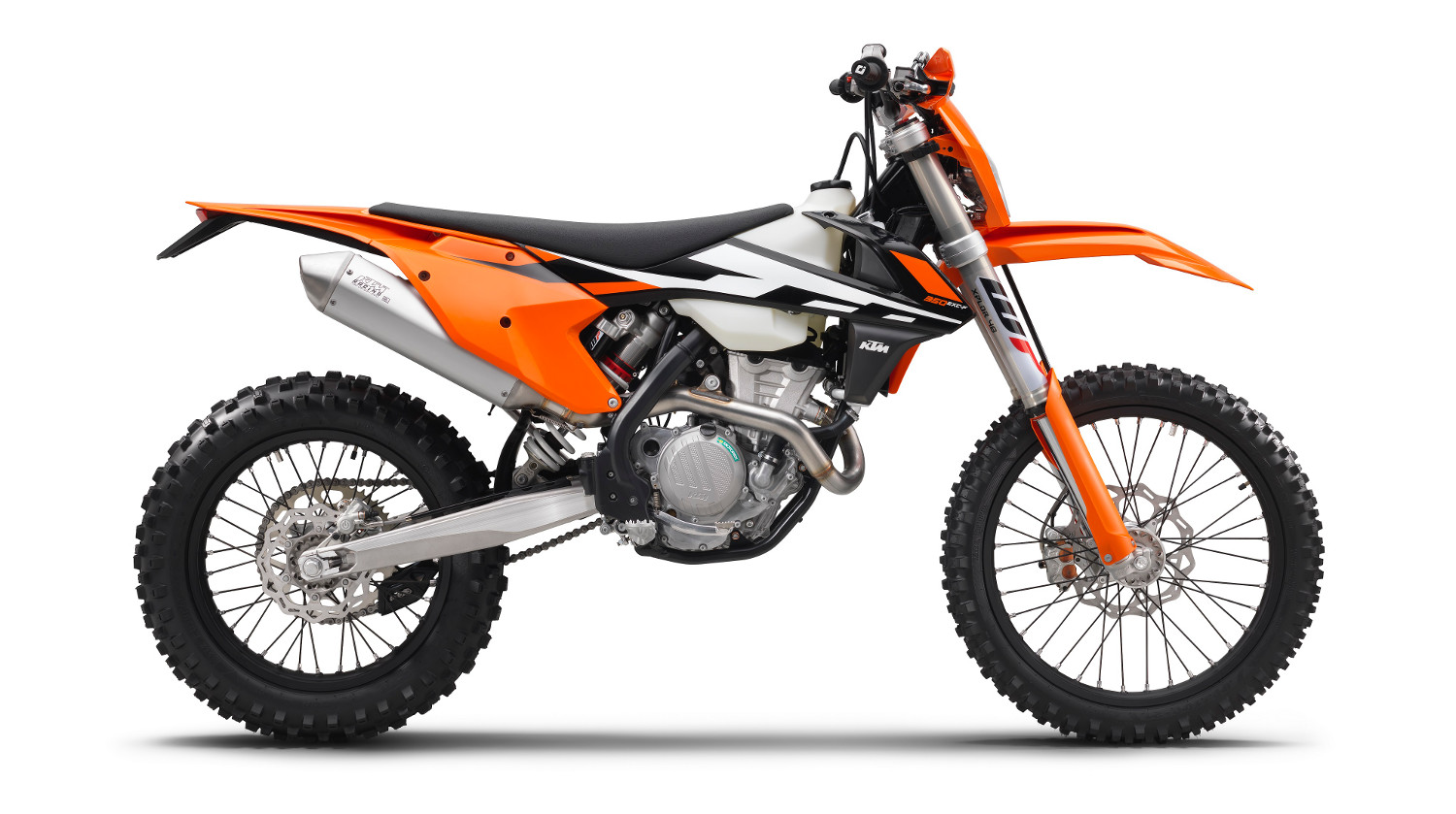 The 450 EXC-F however is the standout improver in the 4-stroke group. Losing 5 kilos puts it in a position where it’s roughly the same weight as the previous 350 EXC-F. That change has made an outrageous difference to the handling. It’s vastly less cumbersome entering corners, on single track and on big descents. The engine has also improved. Like the smaller bikes, it has a freer feeling and has improved the already smooth, easy riding nature. It means you can ride this bike incredibly fast whilst being in charge all the time – arguably the best 4-stroke KTM make ever.

The 500 EXC-F has all the same improvements as the 450 EXC-F, but the extra inertia adds a more sluggish attitude. It’s a much better bike than previously and incredibly good for an open class machine. 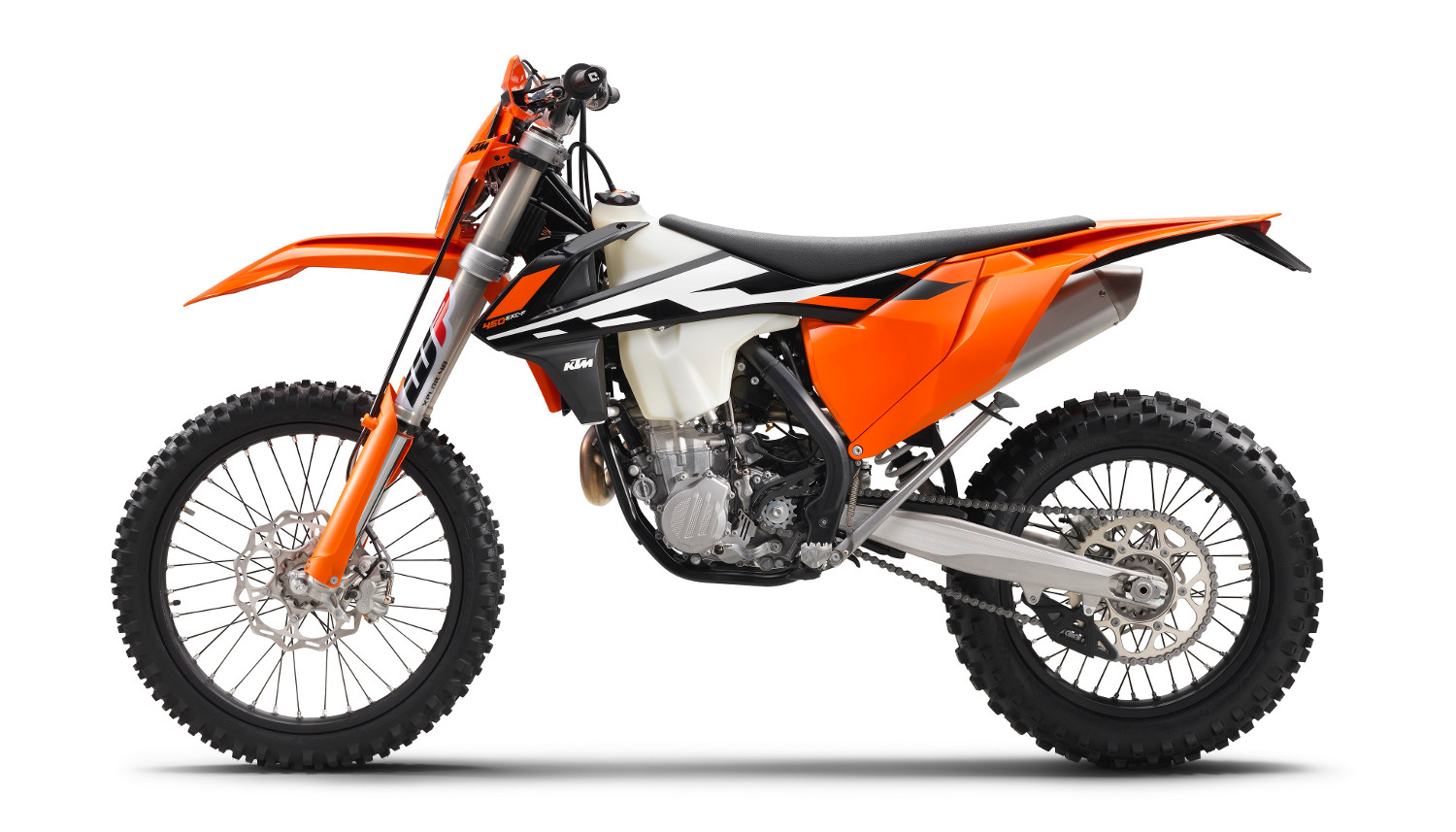 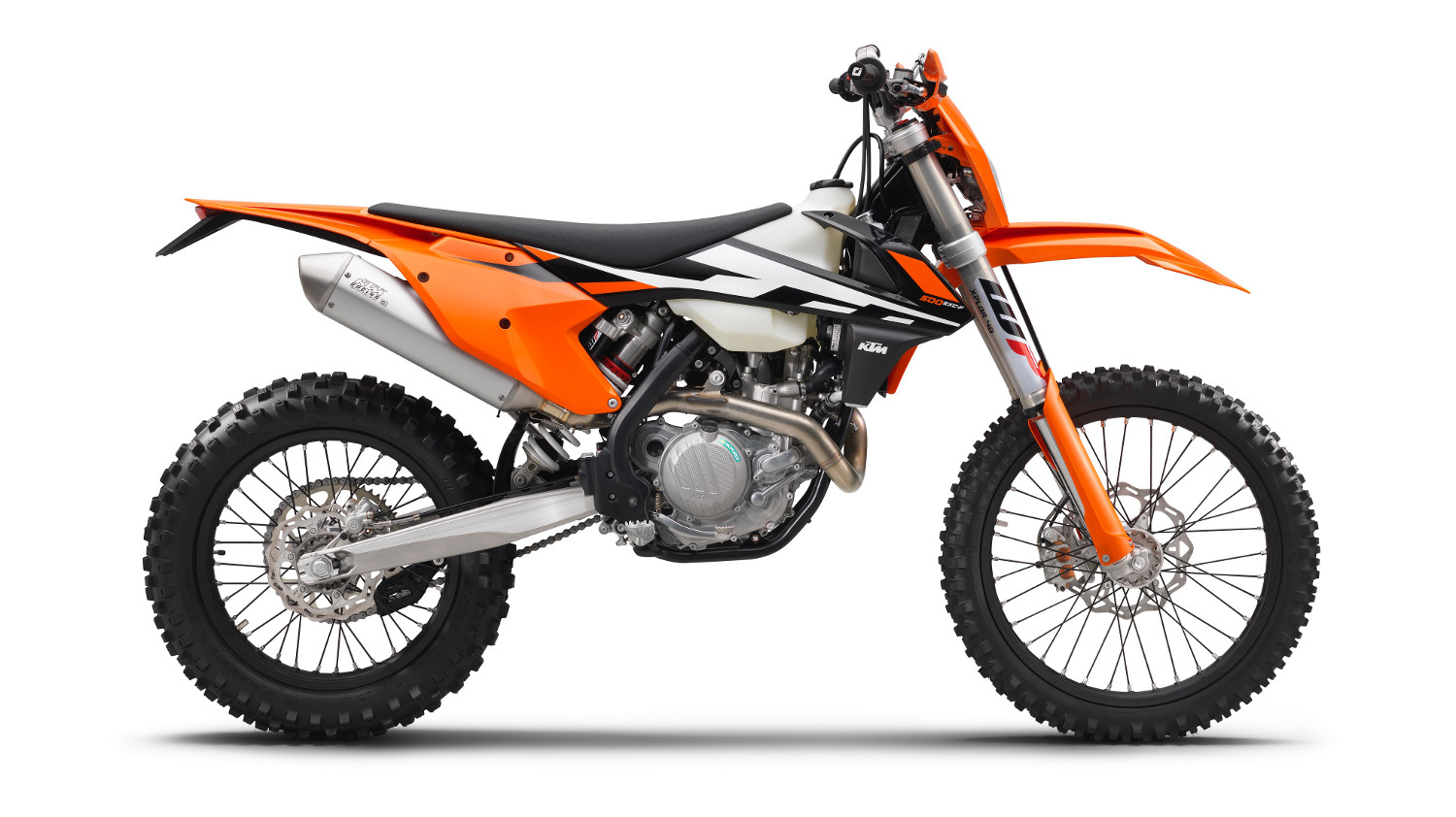 The Smokers
The 125 XC-W has been dropped from the homologated side of the EXC range. Now competition only in most places, the little smoker has had the same upgrades as all the other bikes, including a new motor. A magic button hasn’t made the 125 XC-W into a bike it can’t be, but it is an immense machine. The key to this lies in the rideability. It can be lugged about and crawl up hills and for most typical Enduro terrain it has a good bottom end. 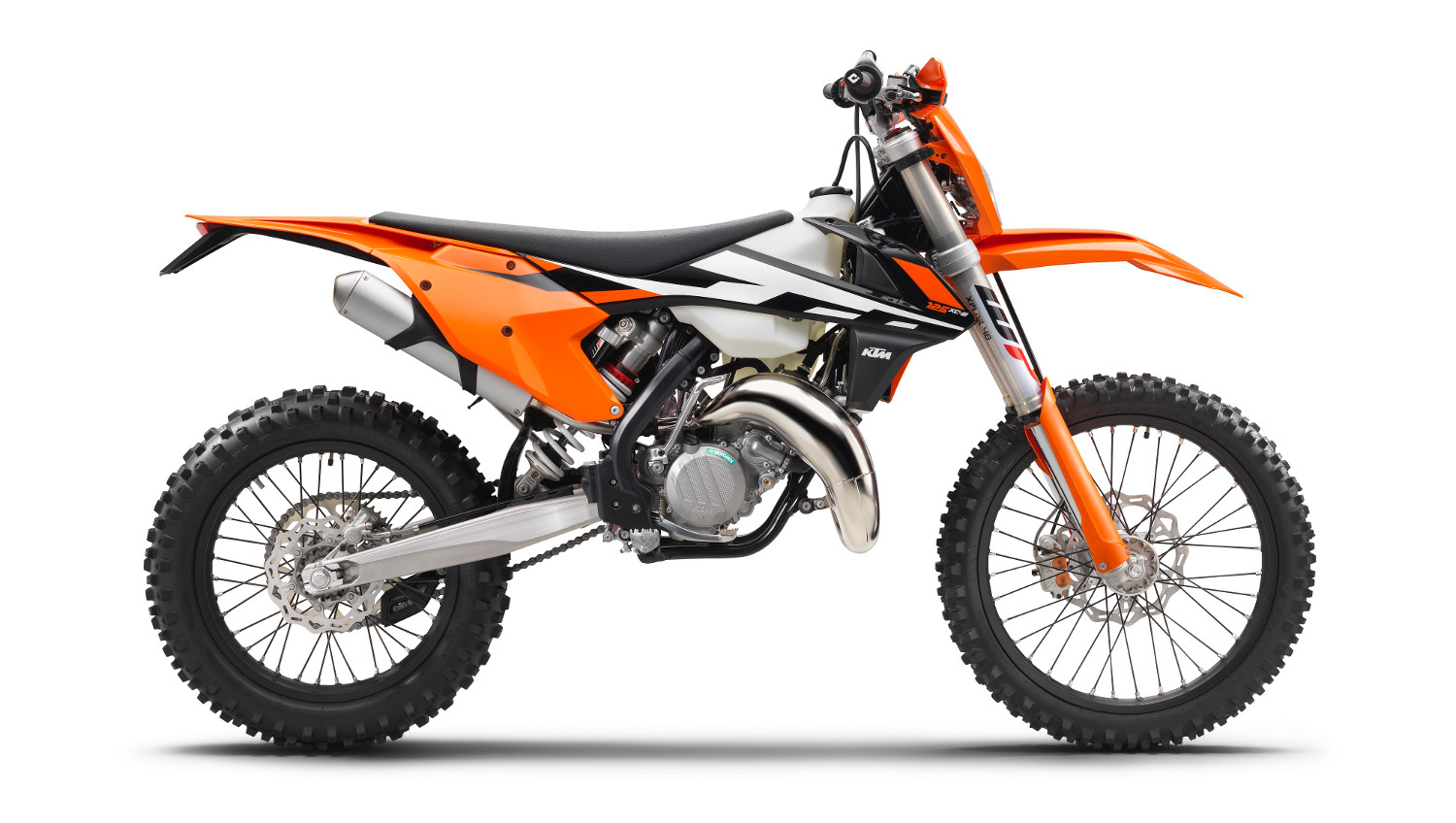 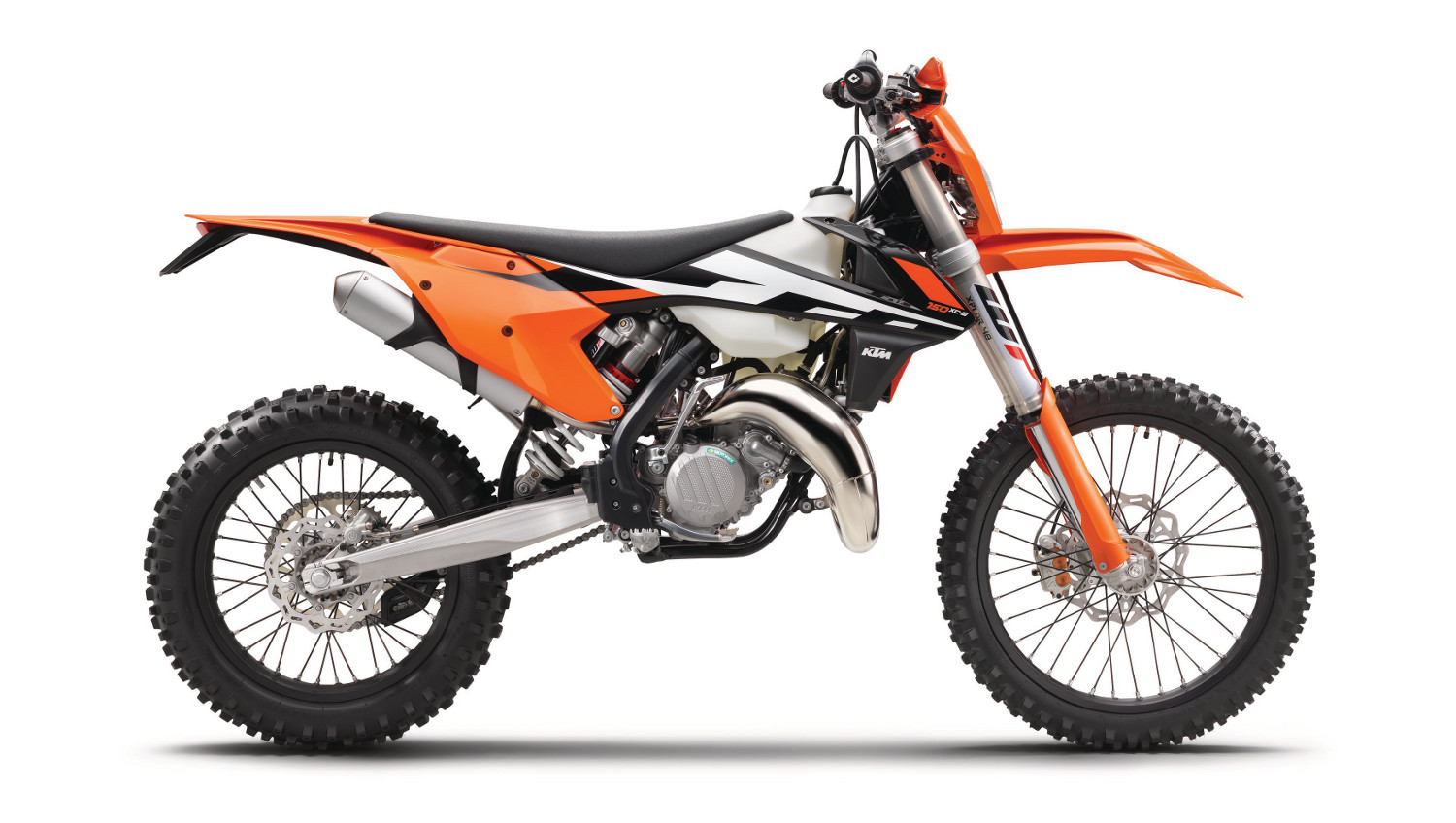 When you need to go, it really hauls too. Getting into the power band is easy and so is keeping it there, which makes for a nice bike to ride. Once it’s on the pipe it is quick too. Because of the ease of use, increase in power, its low weight and easy handling, the XC-W is less intense than it previously was and therefore is able to be ridden faster and for longer. The 150 XC-W has the same platform as the 125 XC-W and the cylinders are interchangeable. The 150 XC-W also has the option to have an E-starter fitted, and has been introduced in replacement of the now obsolete 200 EXC. The all-new large capacity 2-strokes are a revelation. The reduced vibration means you hang on a little less and so the whole bike is less fatiguing. It’ll also means the bearings and wear parts will last longer. 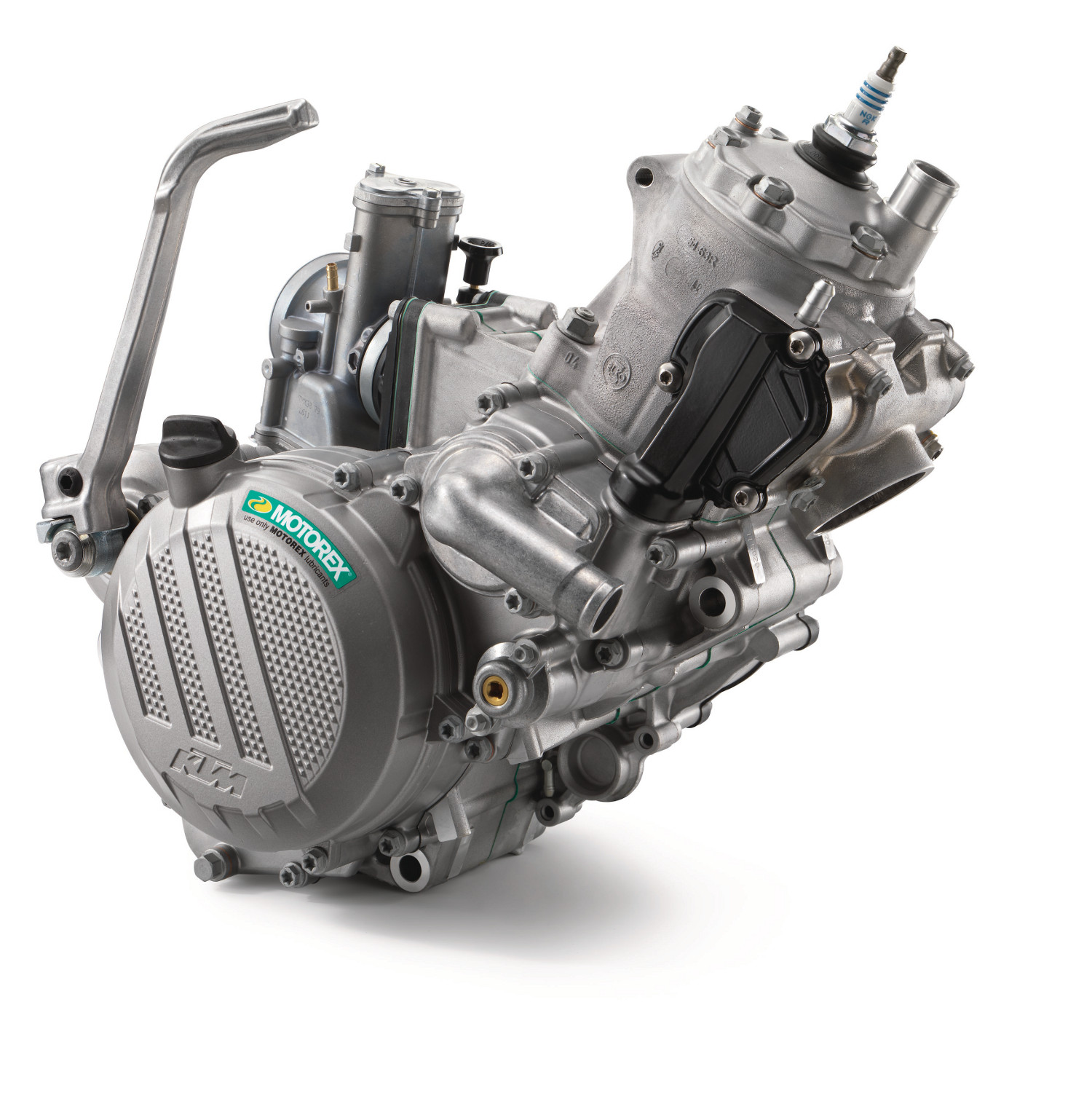 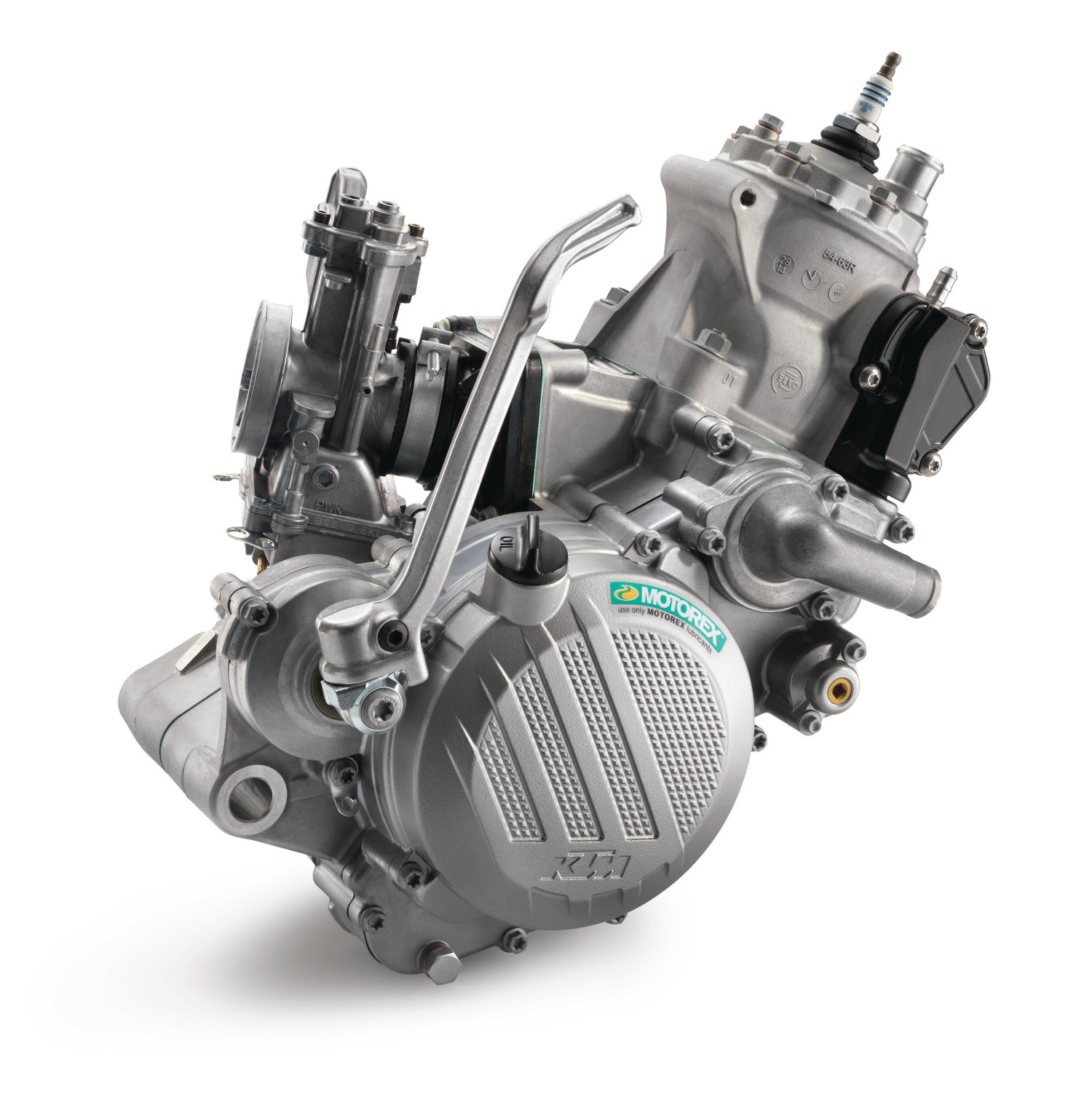 The engines are a great step in the right direction too. The 250 EXC carries more power everywhere and pulls out of the corners with more poise. Gear selection is a little less critical than previously but it is still a 250 2-stroke. It works best when you’re in the powerband and riding hard. The transition into the powerband is smoother and the bottom end is capable of dragging you up to speed a little better than before but the best way to ride it is still in the right gear and on the pipe. 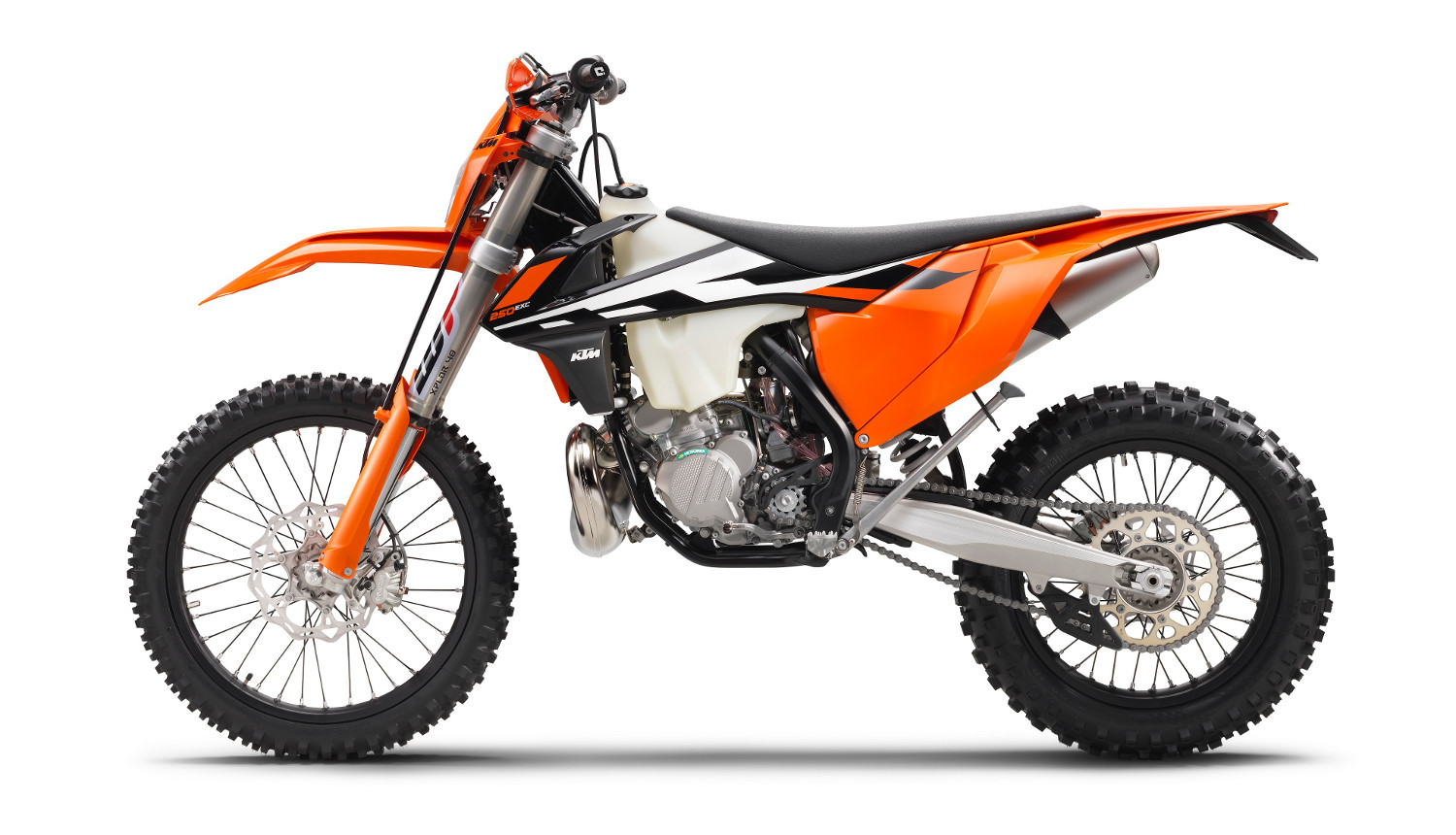 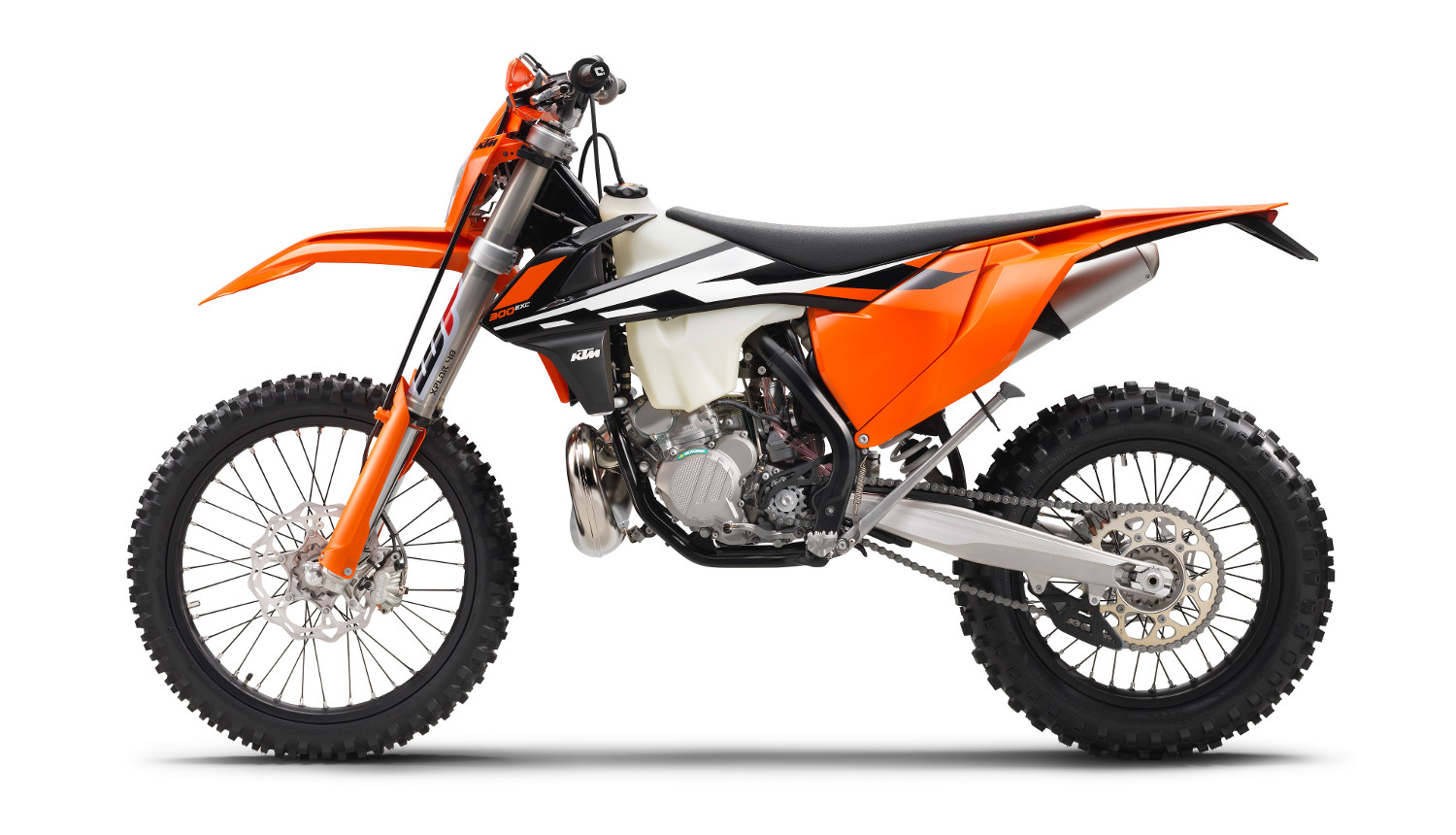 The more impressive change is in the 300 EXC. It’s a bike that has moved to a whole new level of controllability. In the past it could be abrasive but the 2017 engine is made of pure torque. It pulls outrageously smoothly in any gear and no longer makes you feel like Stretch Armstrong. The end result is a bike that lets you be lazy, use any gear and make immense progress with little effort. The older 300 EXC could quite easily eat people alive. That is no longer the case and as such the new bike is seriously fun to ride and very efficient. 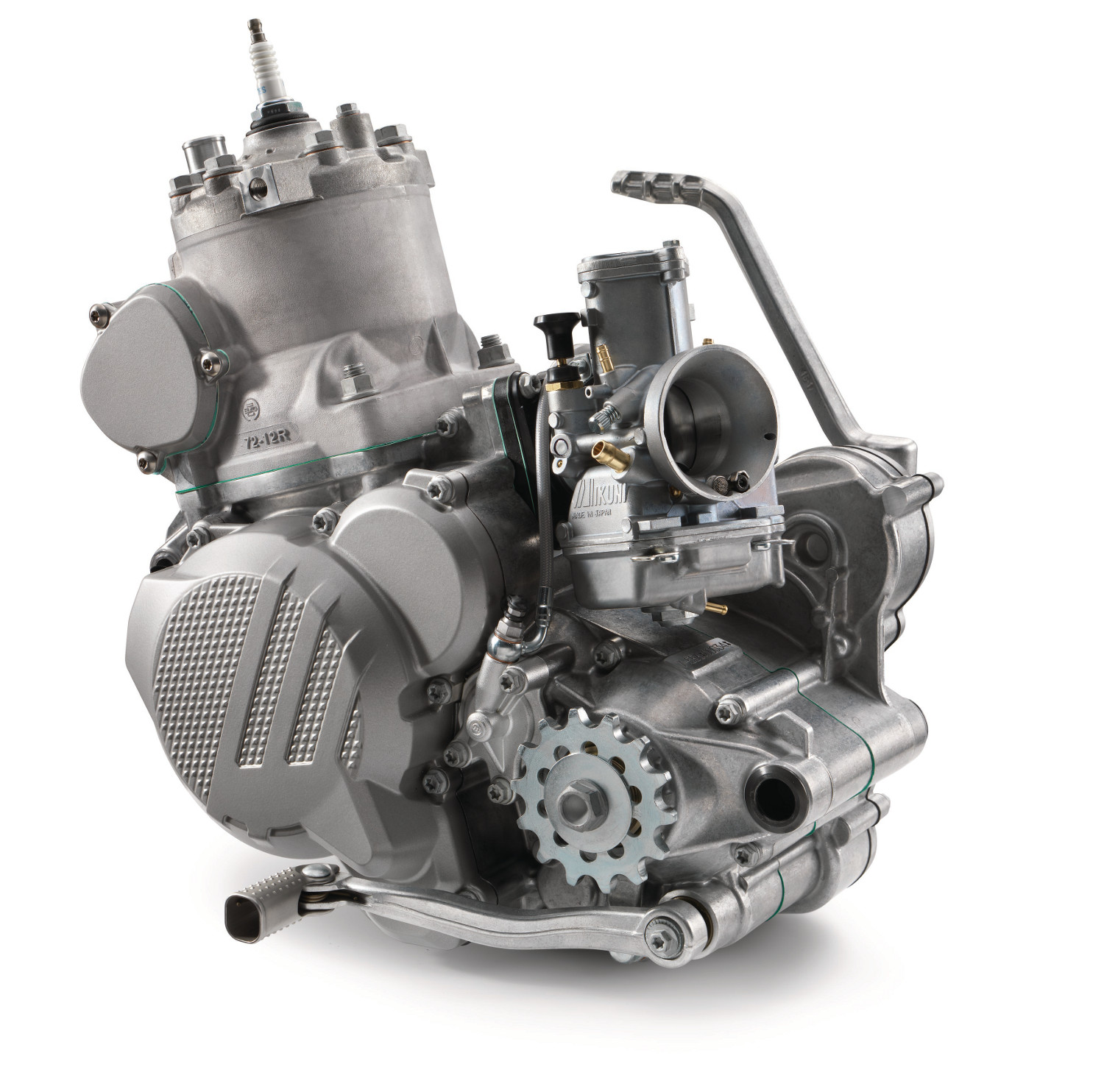 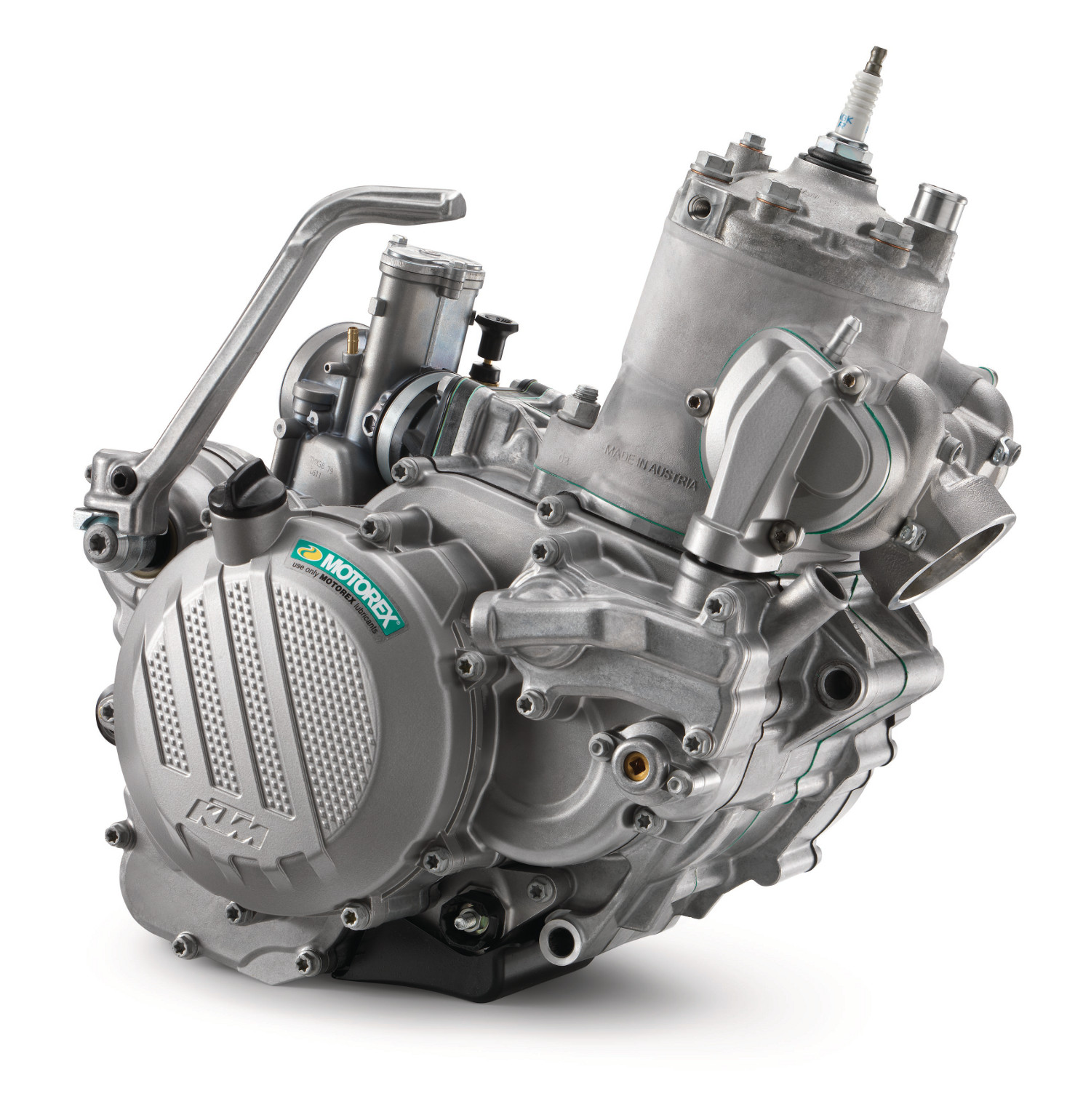 The Suspension
Completely new in design on both ends, the WP Xplor units felt very good. The fork is an open cartridge design similar to the stock KTM of last year. It’s mated to forged triple clamps and is set up to be soft and gentle on rocks and roots. The new design stiffens decently on hard impacts and should provide a great base for most riding situations.

Likewise, the new shock is designed to resist bottoming better than before. It was well set up and dealt with the terrain predictably and comfortably. It only bottomed once all day on an over-jump and doesn’t do anything untoward in the rocks or unexpected hits. Overall the suspension is a confidence inspiring base package that’ll suit the vast majority of riders. 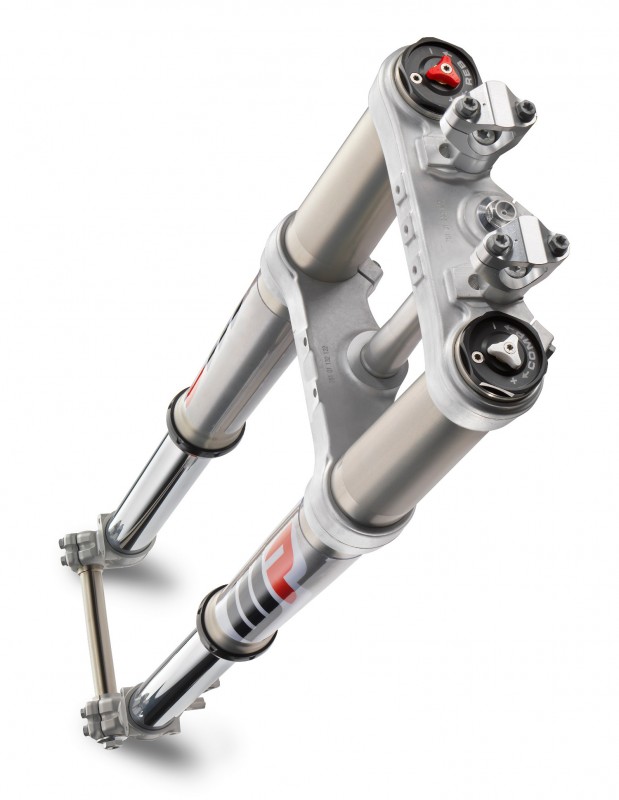 The Ergos
The ergonomics will feel relatively familiar to KTM owners of recent years. The seat is a little flatter, harder and wider than previously and the bikes are still razor slim. The seat height is 10mm lower and ground clearance 10mm better. As always the handlebar to seat relationship is fantastic and the whole dashboard feels spacious. The grips have been updated to a far better ODI lock grip too. The familiar Brembo brakes and hydraulic clutch all remain and are paired to a new rear brake, new footpegs and a new gear lever that are designed to prevent mud clogging. KTM have also updated a bunch of niggles to make ownership more pleasant, including the design and fitment of the air filter and adjustment of the throttle cables.

For more information on the 2017 KTM range click here.