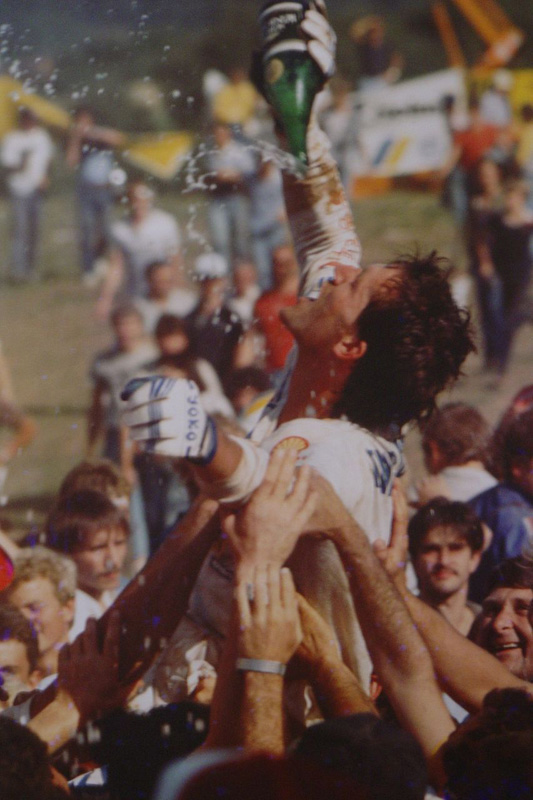 1985 – 30 years ago, the wreck of the Titanic, probably the most famous ship of all time, was discovered; the ship sank in 1912. Commodore presents the Amiga, one of the most popular home computers of its time, while Microsoft launches Windows 1. In the same year as Brazilian Ayrton Senna won his first Formula 1 Grand Prix, the footballer Cristiano Ronaldo and Formula 1 star Nico Rosberg were born. Heinz Kinigadner starts the 250cc MX season as the reigning World Champion with the #1 on what was still a green start number plate.

Kini’s first world championship title was a milestone in the history of KTM, with an Austrian winning on an Austrian motorcycle in the 50th anniversary year. The season had gone well for the tall Tyrolean who had extended his lead to a comfortable 84 points. It was not until close to the end of the season that Frenchman Jacky Vimond, jokingly referred to as “Pink Panther” because of his rather unusual pink riding gear, began to gain ground, but Kini held him at bay and secured his first World Championship title in Hyvinkää, Finland. Three weeks later, Heinz Kinigadner was seriously injured during a Supercross race in Spain, sustaining multiple fractures. Short after his older brother Hans also had a heavy crash at the national Motocross championship resulting in paraplegia – not exactly the ideal conditions for preparing to defend his title. 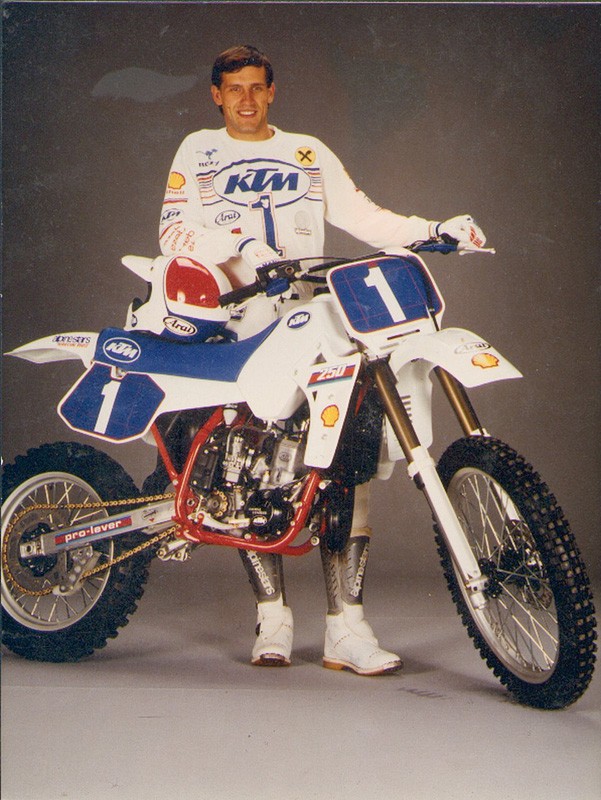 The season opener in South Africa, where you can normally guarantee sunshine, was totally rained out, with Kini’s training deficits due to injury added for extra measure. An eighth place was the meager points haul for the reigning World Champion. But things got even worse at the second Grand Prix in the Swiss town of Payerne, where the world cup squad completely floundered in the mud. With a fourth place in race 1 and a sixth place in the World Championship standings, Kini left Switzerland trailing 42 points behind Vimond.

And bad luck struck home again at his home race in Schwanenstadt, Austria, the venue of the third World Championship race. After a tough battle with 21-year-old Dutchman Gert Jan van Doorn, the KTM rider suffered a flat rear tire after just ten minutes in the lead. But even in this fairly hopeless situation, he kept a cool head. At pit stops during the race only one mechanic was allowed to work on the bike, otherwise disqualification threatened. Kini recalls: “It was KTM’s home race and I knew that, during a pit stop, a whole crowd of mechanics would pounce on my bike; that would have meant the ‘red card’ for me – I was afraid to enter the pits and stayed on the slopes.” He still did enough to come in 12th. 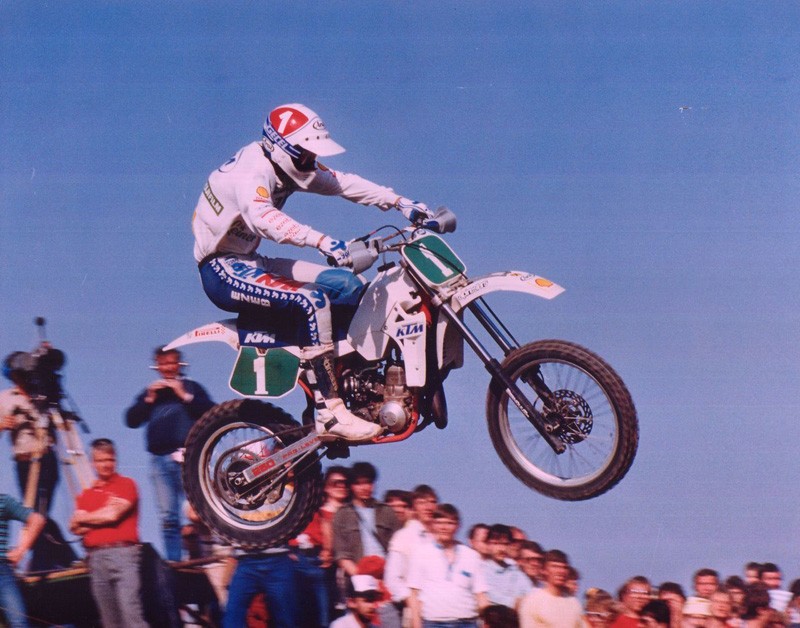 After this Kini’s form continuously improved – at the Italian World Championship race he was able to slightly close the gap to championship leader Vimond despite two fumbled starts; and at the fifth World Championship race on the rock-hard slopes of Borgloon, Belgium, he finally scored his first race victory. In Holice in the Czech Republic, Kini finally caught up with the leading group. Although Vimond won the first race in the dry, it was Kinigadner who aspired to top form on rain-soaked ground in the second race, relegating the “Pink Panther” to the also-rans. Despite this, Kini was still unable to oust the Frenchman from the top notch in subsequent races so that Vimond traveled to the final race at Goldbach, in Lower Franconia, Germany, with a 12-point lead in the World Championship. 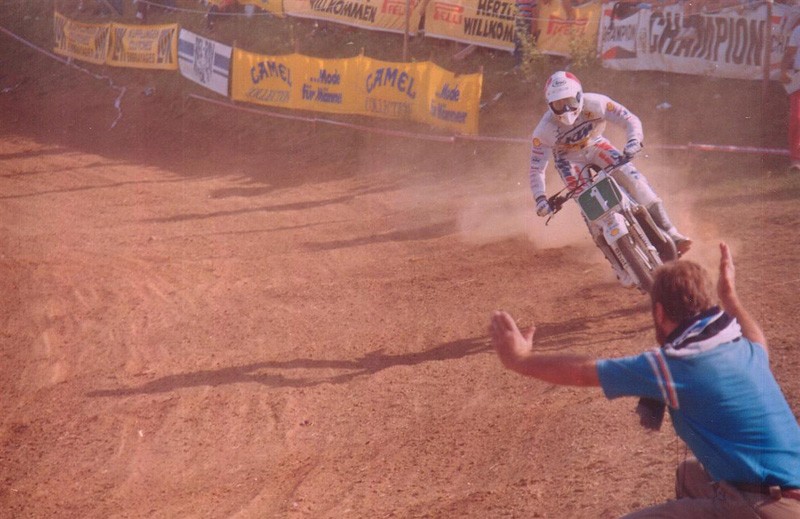 With two race wins, Kini still had everything to ride for, and his game plan was to attack. Exactly the right strategy, with the Frenchman’s nerves playing up and preventing him from moving beyond a midfield placing. Kini had taken over the championship lead for the first time in the season, but with just a tiny points advantage over Vimond. In the second round, it was hell for leather. Both Vimond and Kinigadner still had the chance of taking the 250cc laurels. While the Austrian managed to keep out of the jostling at the start, the Frenchman had to come from behind and play catch up with the field. Kini only needed to cross the line before Vimond, which he managed to do, securing a fifth place finish. 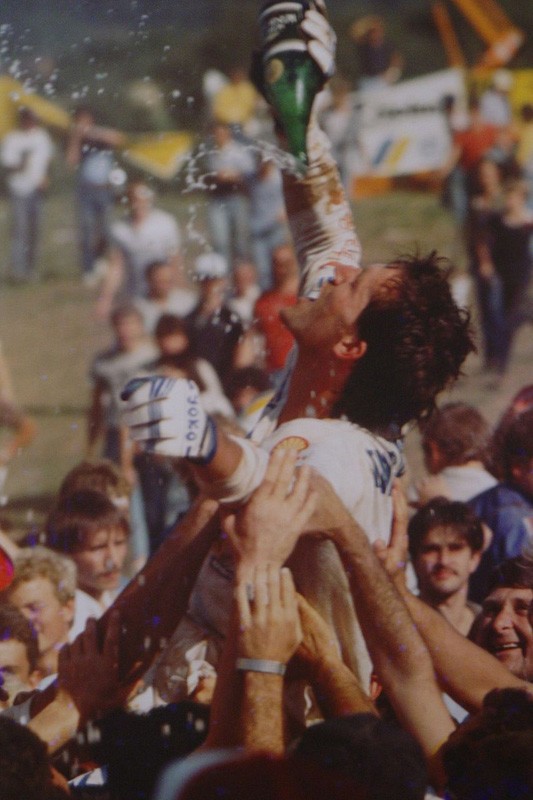 Unlike in the previous season, where Kinigadner had dominated from the outset, he had to nibble off Vimond’s lead bit by bit this year. And with the tightest lead of just two points, he only succeeded in doing so in the very last race.

For the second time an Austrian became World Champion on an Austrian motorcycle, sporting the prestigious start number 1 of the defending champion into the bargain; things could not have turned out better in the 1985 season.

After switching to the 500cc class, Kini moved on to rallying at the end of the 80s, providing valuable impetus for the development of the rally machines on top of his sporting successes and ultimately culminating in KTM’s dominance of the Rally Dakar today.