242.9 km/h. 150.9 mph: the fastest pace clocked by KTM’s RC 250 GP so far in 2015 (at Mugello in Italy). Would you be able to react at that speed? Be able to drag close enough to another motorcycle to feel exhaust fumes on your visor and then swerve alongside? Slipstreaming is a regular occurrence in the Moto3 class of MotoGP and one of the important weapons in a rider’s arsenal to gain advantage on the track. It is a risky but powerful means of overtaking and in the all-out-warfare of the FIM World Championship’s smaller category then it happens every lap once the pack threads out onto a straight. 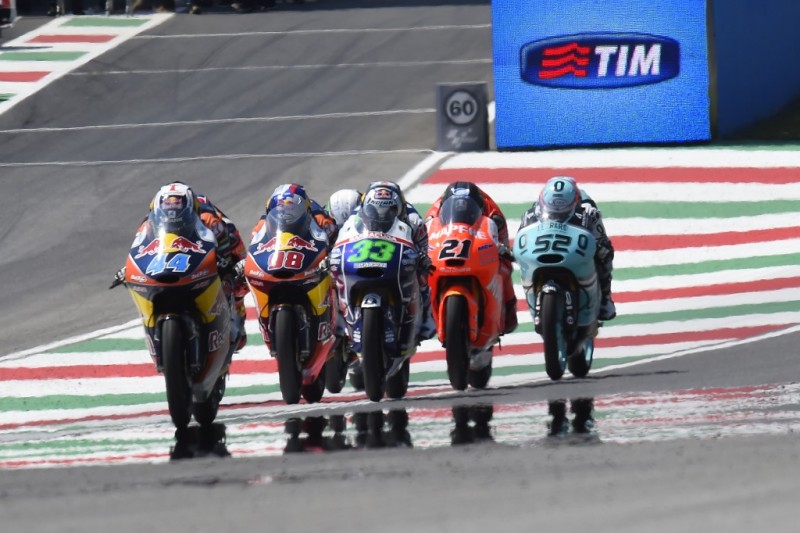 Manufacturers and teams spend vast amounts of money to ensure that aerodynamics are pin-point for their race machinery to ‘punch’ the most effective hole through the air and carry as much of an advantage as possible within the group. MotoGP bikes are reaching numbers of 350 km/h (clocked by Andrea Iannone, also in Italy) and once any rider-motorcycle package breaks that magic 200 mark then any slight modification can add up to five km/h of difference. Moto3 is more ‘tribal’ due to the closeness of the KTM, Husqvarna, Honda and Mahindra technology.

“The Moto3 bike is light so the slipstream is important and you can see this very well when compared with something like Moto2,” offers Red Bull KTM Ajo team principal Aki Ajo. “If the timed practice lap is not so perfect in Moto3 then many times riders have still been able to push for the win or at least challenge for the podium when they have been in fifteenth or twenty-fifth position on the grid. In Moto2 and MotoGP this is not possible because you cannot use the slipstream that much. You can have a chance in Moto3 from many places but it also depends on the rider’s experience at the track and it is important to explain to the young riders that there is a lot of variation between the different tracks and the straights where the slipstreaming can be vital whereas in some other places less so.” 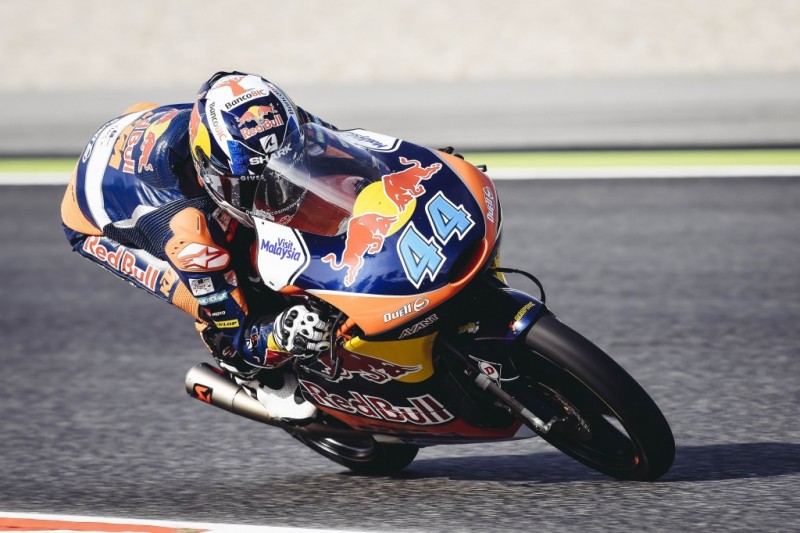 It is not uncommon to see gaggles of more than ten riders disputing Moto3 podiums positions and equally tense battles further adrift. For a team like Red Bull KTM Ajo then a key part of pre-season testing will be to make sure an athlete like Karel Hanika (176cm) can tuck in and use a slipstream as effectively as Miguel Oliveira (170cm). Due to the smaller profile of the Moto3 bike then riders have to be careful with their weight and bulk. Optimising the package is not always that easy.

“We are limited in Moto3 because of the homologation rules that means we cannot be making five different fairings for five different riders; it has to be something that is more universal and one size for the year,” says Sebastian Risse, Head of KTM Road Racing. “The lead times would also be difficult because we’re working already half a year ahead.”

“The basic aerodynamics of the bikes are really important,” enthuses Ajo. “The factory are always trying to find out what riders we will have in the future and the bike needs to be ready for many different sizes. When the bike is ready then it is difficult to do much to it afterwards. It has to be done in the engineering and manufacturing stages. You can adjust for slightly bigger riders but it is hard once the season starts. You can fit slightly bigger riders in with different handlebar and footpeg positions but you have to be very careful because if you start moving the bars around by 10mm here-or-there then it also changes the balance of the bike a lot. It is many things … not just position and aerodynamics but also the effect on the suspension and handling of the bike. That is why it is so important in the design stage.” 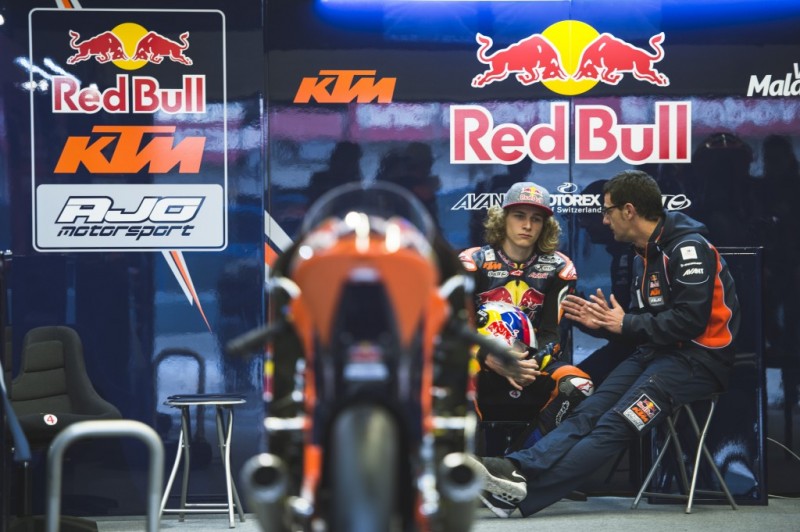 “Aerodynamics is something we are constantly working on with wind tunnels and track tests CFD (Computer Fluid Design) technology,” says Risse. “We use various facilities, but cannot say too much about what and where! It is fairly normal practice in the automobile industry where manufacturers use different corporations and leave their rigs and settings in a wind tunnel. Sometimes you can go to the wind tunnel once and find improvement sometimes it might take three visits.”

Renowned design agency KISKA might be responsible for the look of the RC but then KTM Racing’s R&D takes over for extra refining. “The basic design comes from KISKA and then we make small mods because it would not really make sense to keep going back to KISKA,” Risse says. “These are only small changes to the 3D parameters and would not be something that you’d really notice on the finished bike.”

Once the rider and bike are finely tuned for airflow and maximum possible speed then slipstreaming is a matter of technique, judgement and experience. Often in Moto3 the majority of the 18-22 lap distance is a form of prologue to the last few circulations of frenzied action before the chequered flag. “I always say to my riders that on Friday from the first practice and the first exit from the pit lane we are working towards the last five laps of the race on Sunday,” says Ajo. “It is important to keep in mind. Whatever you do in practice and across the weekend then we are working for those five laps.” 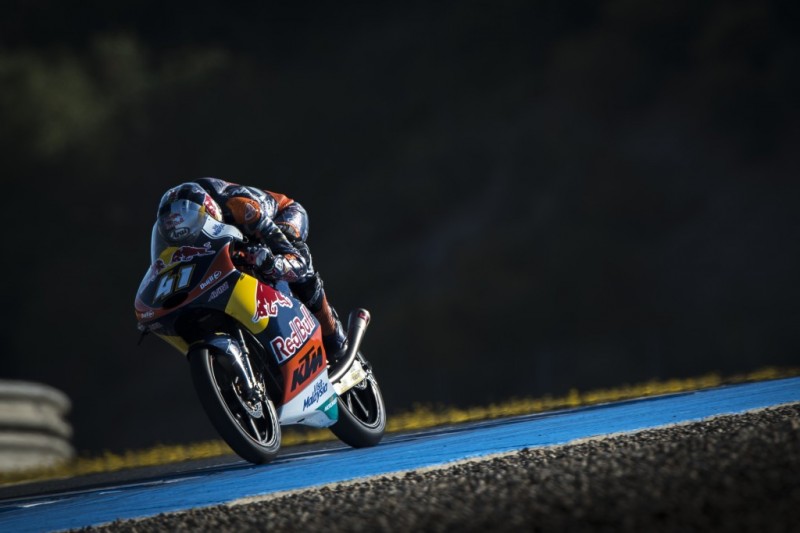 Among those key moments of a Grand Prix slipstreaming plays a key role but the racing experts rightfully point out that it is just one facet of a rider’s capabilities. And aerodynamics is also part of a motorcycle’s overall performance to get the job done. “Slipstreaming is important but not number one,” opines Ajo. “It doesn’t help if you are really good in the slipstream but other areas do not work. It is not a priority for young riders just coming in but when you are improving and getting nearer the front then yes. It is an extra skill, a professional tool.”

“It is the not the first thing from the perspective of a lap-time but it can be very frustrating for a rider over the course of a race if he is being passed every time the group gets on the straight,” comments Risse. “Compared to developing the chassis and finding another two or three km/h of corner speed then there is no competition … but one thing cannot survive without the other.”

Development on aerodynamics is a confidential subject for technicians while slipstreaming is a very public dexterity that aspiring Grand Prix winners need to hone. As mentioned, the work done on both aspects drift together when the rider pops out of the flow and makes a pass. Ultimately though … what’s the sensation like of slipstreaming at GP level? Former racer Ajo is best placed to answer: “It feels great when you have some extra boost! Especially if you see a group ahead. If you can use the draft of four or five riders at the same time then ‘boom!’ you can just go. It is like having some magic power or a turbo boost. You can really feel the difference in speed.”

359 Responses to In the ‘Stream‘: Making the tow in Moto3