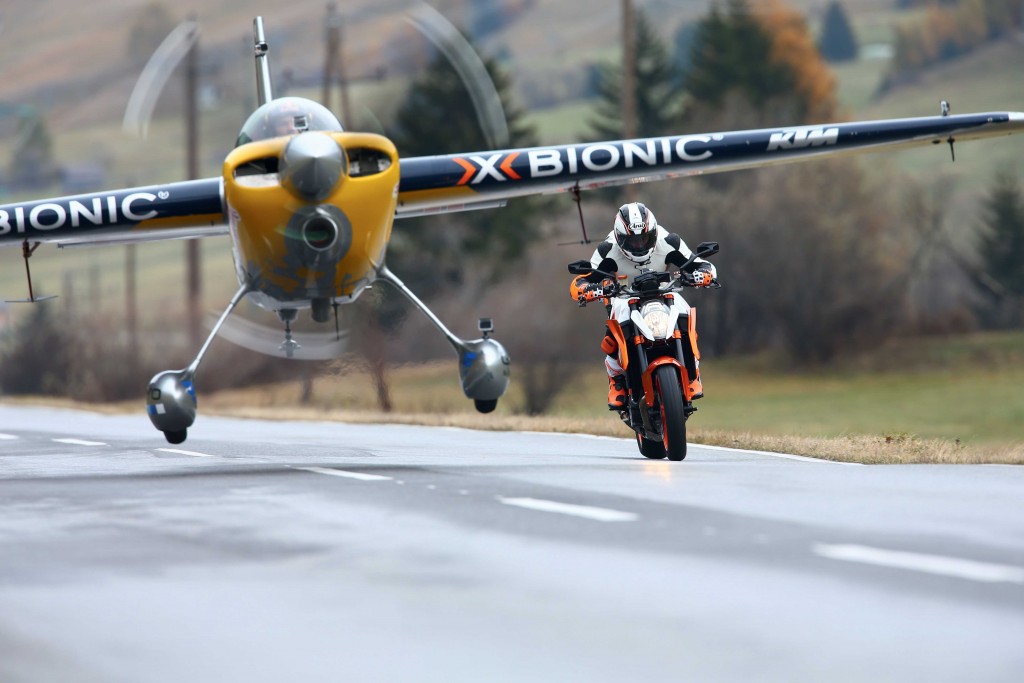 UNBOUND: Taking it to the edge

Internal combustion-engined vehicles of completely opposing types squaring off against each other in a high-adrenalin battle: this never fails to get the pistons pumping in any petrolhead – and at UNBOUND, we are no different. 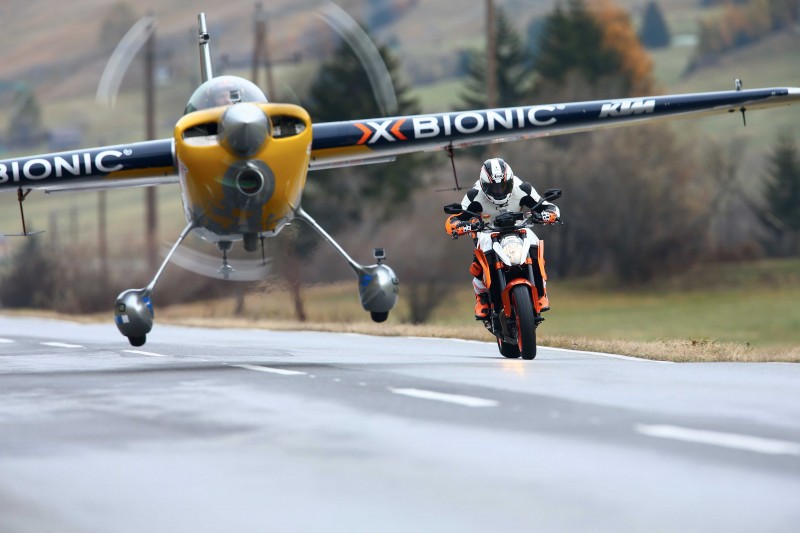 When we interviewed top acrobatic pilot, Hannes Arch, in issue #1 for the heroes feature, the Austrian compared flying stunt planes with the finesse and skill required to ride a motorbike; only without the third dimension. He’d always wanted to be part of an elaborate stunt that mixed two of his biggest passions.

So here we are – one year later – in possibly the hardest place possible to stage this: the public roads that run through the Reschen Pass. This is where Austria meets northern Italy and is also a mountain pass across the main chain of the Alps; it includes a man-made reservoir on top of an old village that has its famous bell tower protruding from the water.

Pumped with PowerParts in the orange corner is the new for 2016 KTM 1290 SUPER DUKE R SPECIAL EDITION. Yes – the Beast has some sharp new clothes and more exotic metal parts to keep a fresh attitude and remind the world that, in terms of performance, this naked motorcycle outclasses its rivals. We’re talking 173 hp and 144 Nm of torque housed in a lightweight chassis; its brutal V-twin performance barely tamed by leading electronics and top-level braking and chassis components. 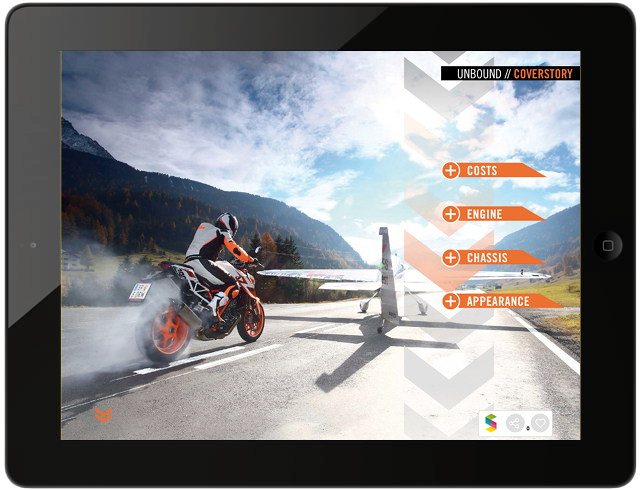 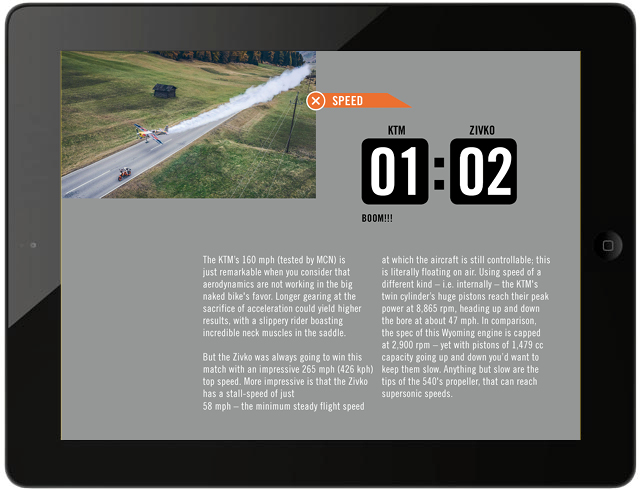 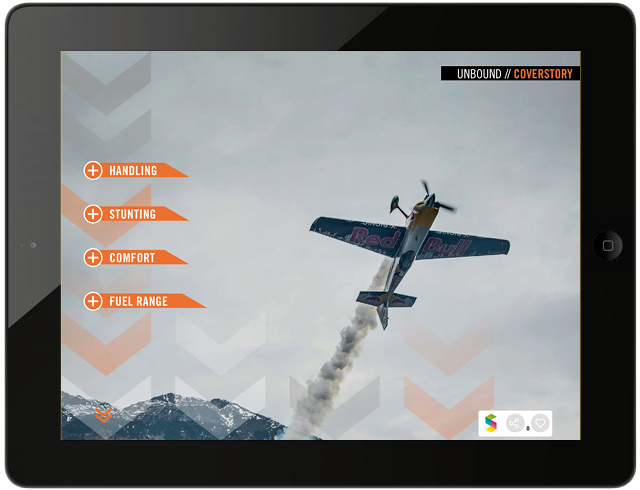 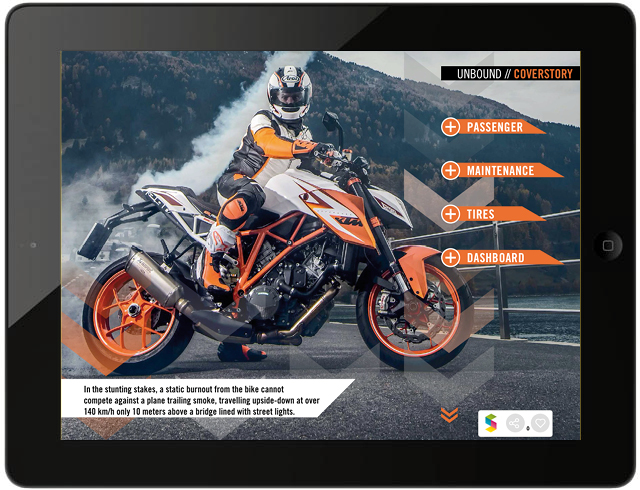 In the Red Bull corner, the Zivko Aeronautics Edge 540. The plane of choice for the world’s best acrobatic pilots, including multiple Red Bull Air Race winner and its pilot here, Hannes Arch. Stripped to the very basics yet still worth half a million pounds, it’s a single-minded, single-engine insulter of the laws of physics, one that can hypnotize all those who witness its abilities, leaving them open-mouthed.

By definition, a race is won by being fastest around a given timed course or first past the chequered flag against at least one rival. Working to these criteria makes a fair contest between a motorcycle and a plane almost impossible, so instead these two contenders will flex their respective muscles in a series of point-scoring category challenges, across closed roads and the airspace of two countries. 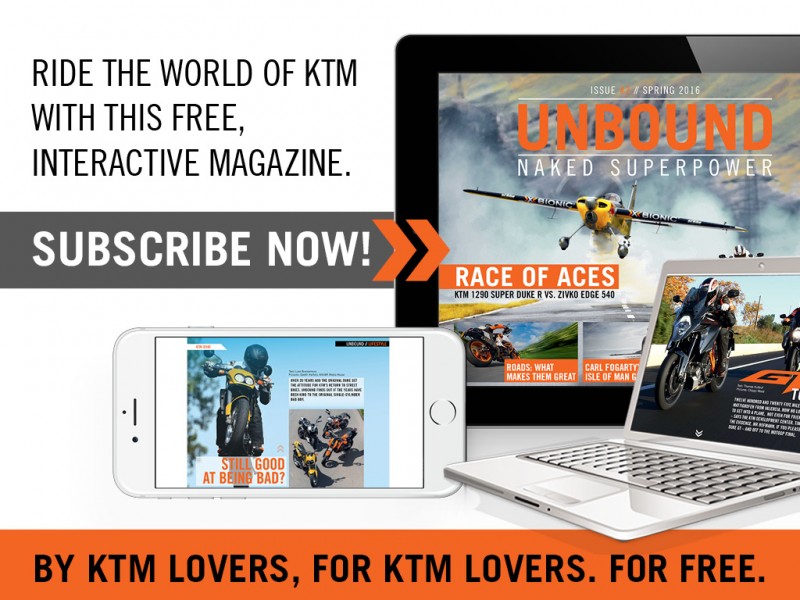 This interactive, digital magazine (UNBOUND is also available in print at your local KTM dealer) gets under the skin of the current KTM motorcycle range, featuring full-throttle stories, exclusive interviews with some of the biggest names in action and motorsports, video features and everything you need to know about the orange world right at your fingertips. By KTM lovers, for KTM lovers. For free.

62 Responses to UNBOUND: Taking it to the edge