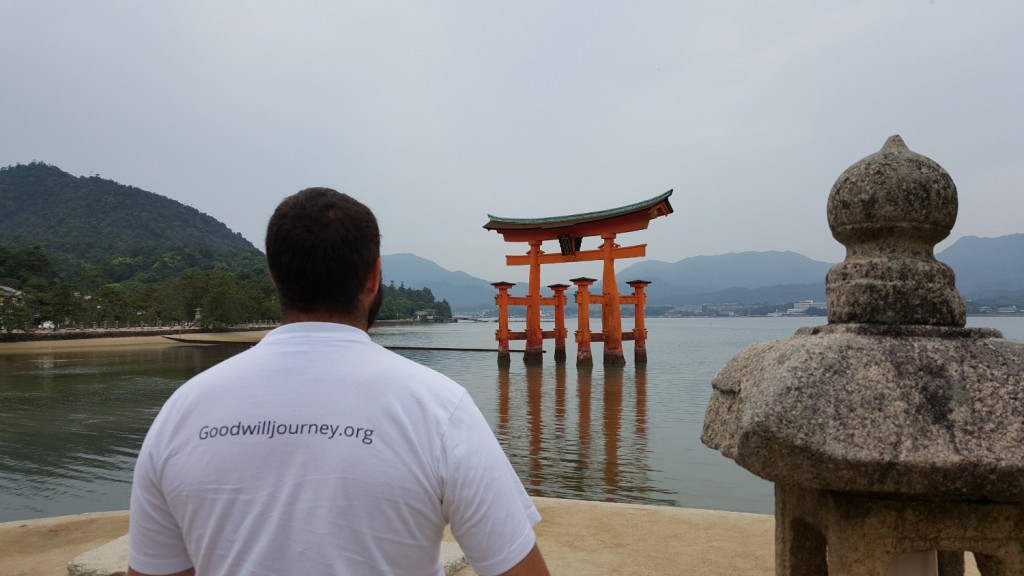 He’s part way through the journey, and after having a mass of issues including crashing, visa problems, theft, a broken wrist, a sunken bike, rescuing a Vietnamese kitten, it’s quite bizarre the level of hammering his KTM 1190 ADVENTURE R has taken, and he’s still pushing on. We checked in with him 50,000 km into his 240,000 km journey that will see 110 countries visited in 2 years, beginning in Dubai in March 2015. The extreme adventurer is raising money for children in war torn countries – it’s called ‘The Goodwill Journey’. 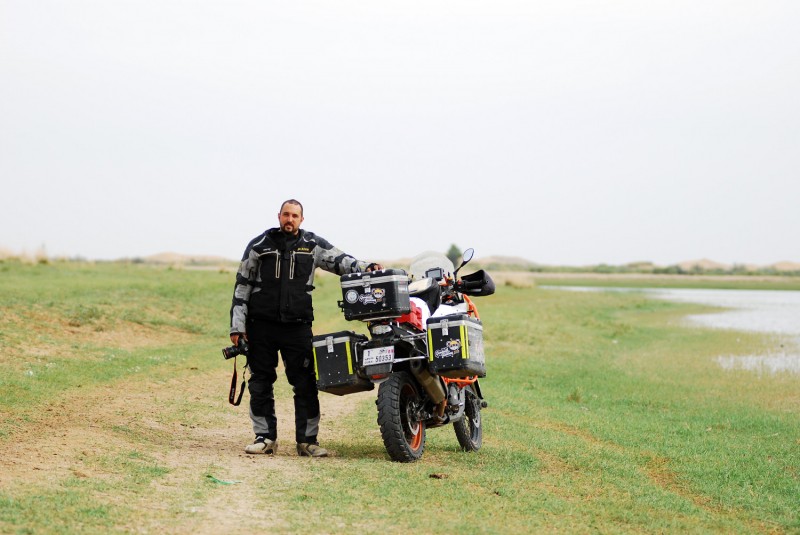 So far he’s been to 25 countries in seven months, and covered at least 20,000 km offroad. It’s been a massive challenge, riding in temperatures of minus 20 and over 45 degrees celsius. Heavy snow, iced tracks on mountains and incredibly dangerous terrain saw Wissam fall numerous times, but he continued to proceed, with the biggest battle being the 70 or so visas he needs to enter the countries during the trip, and difficult regulations to enter various countries with his bike. 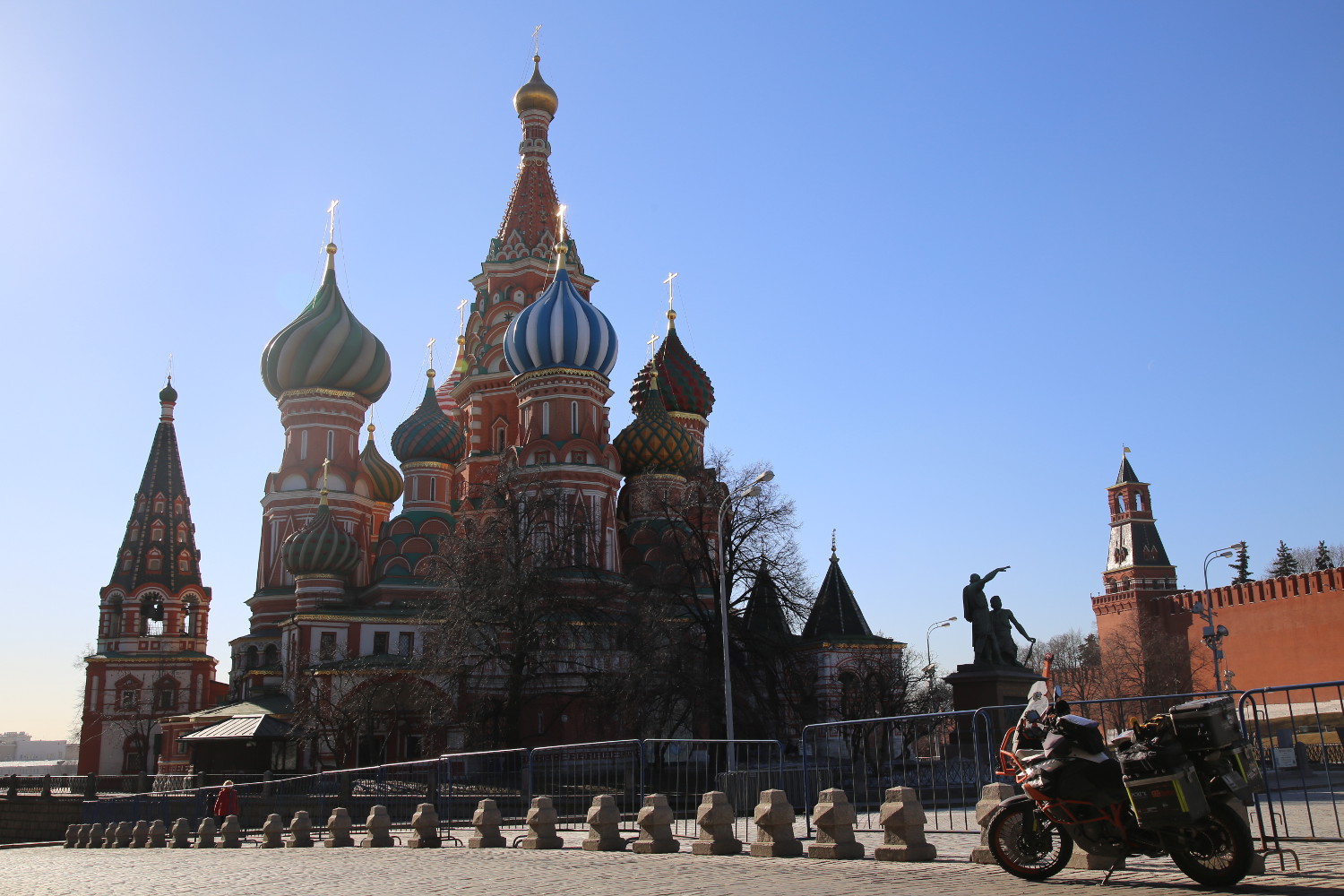 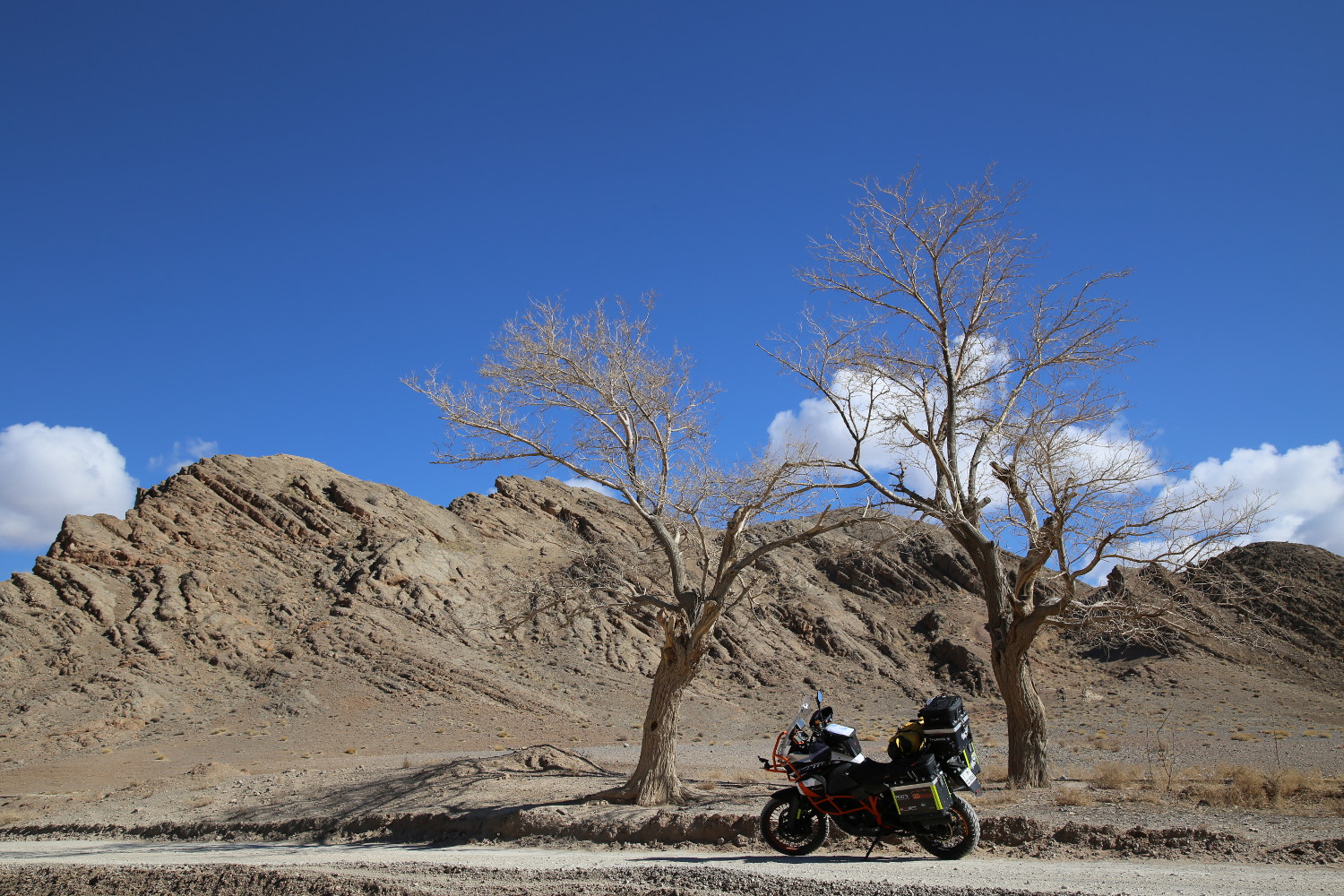 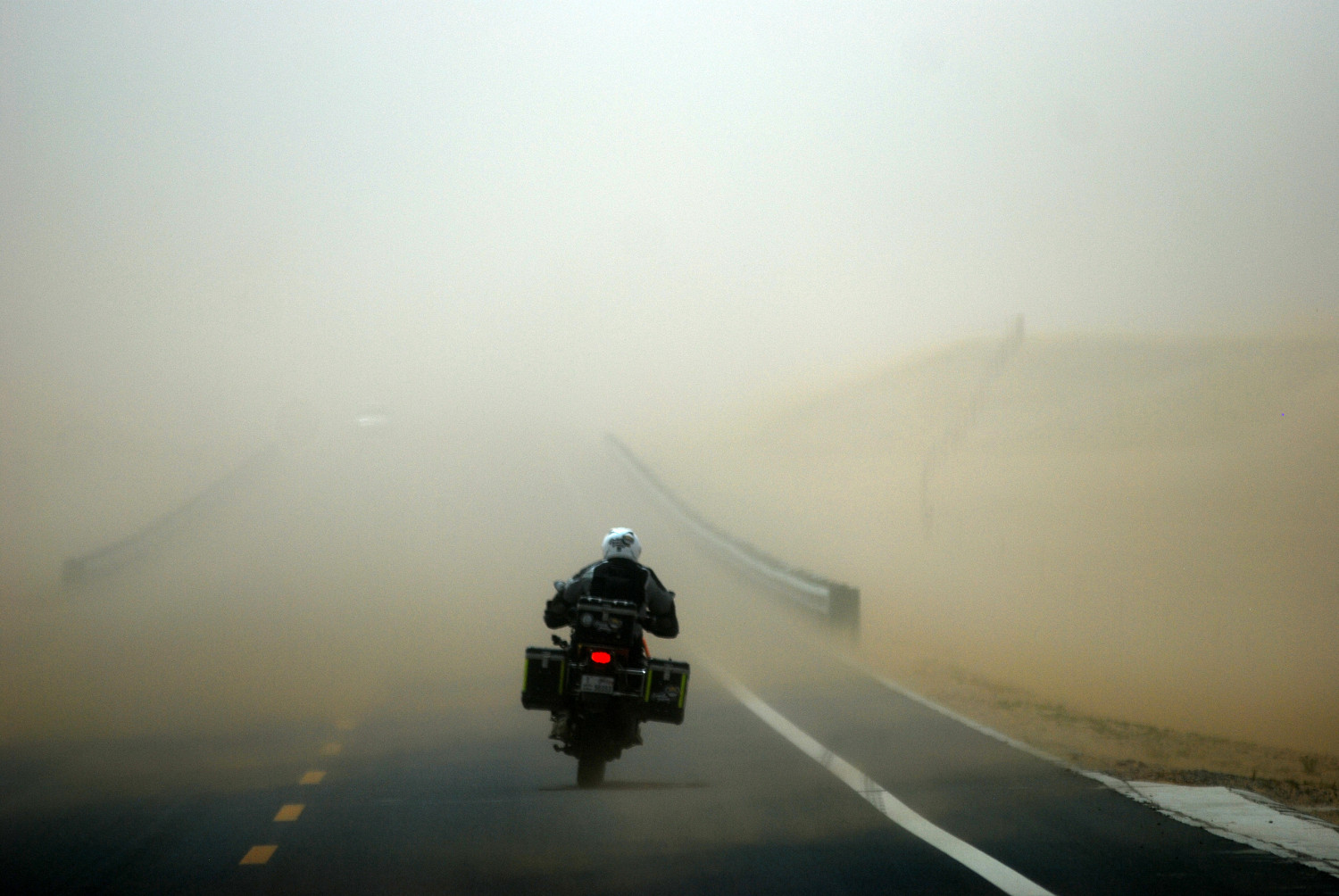 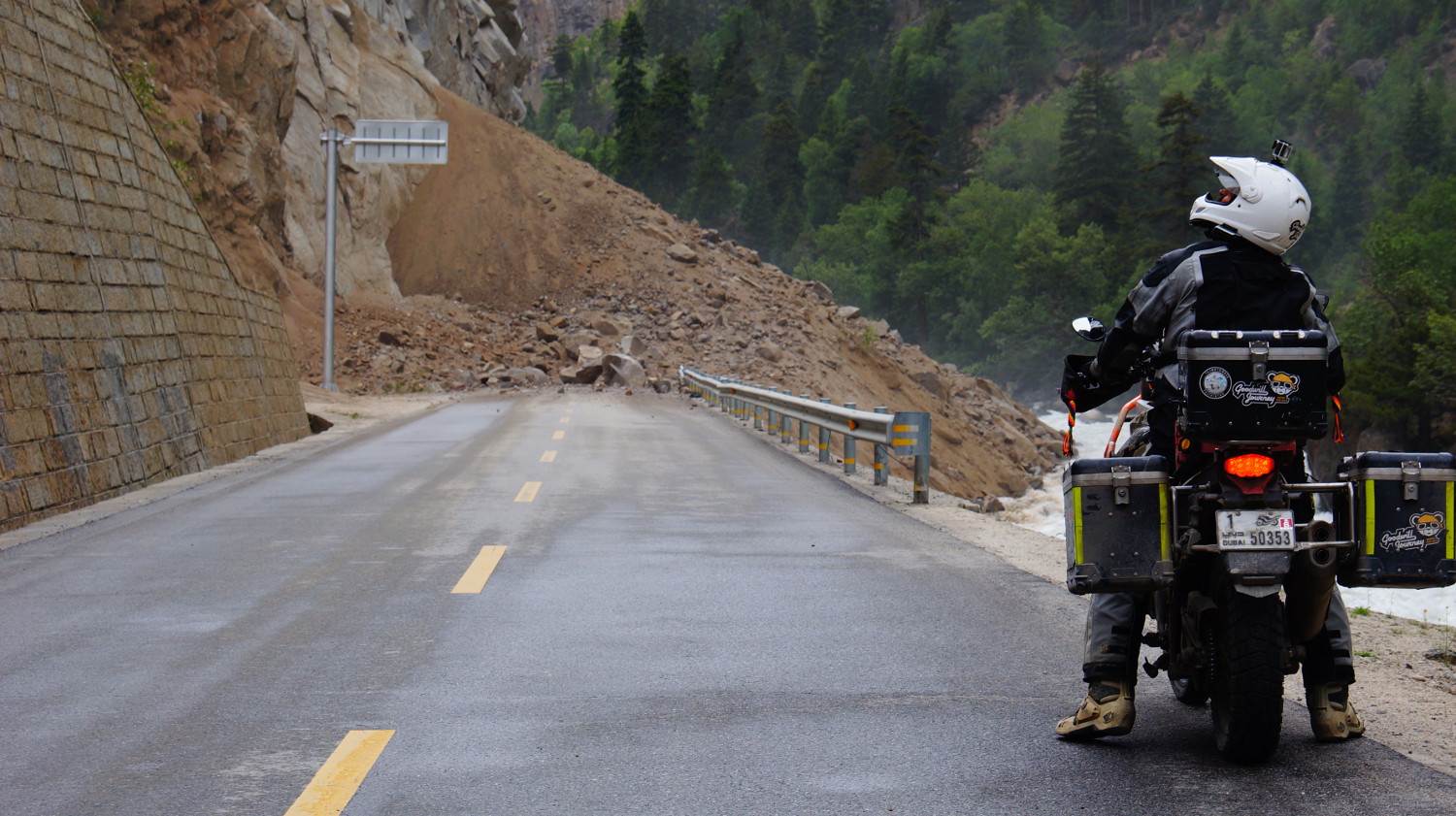 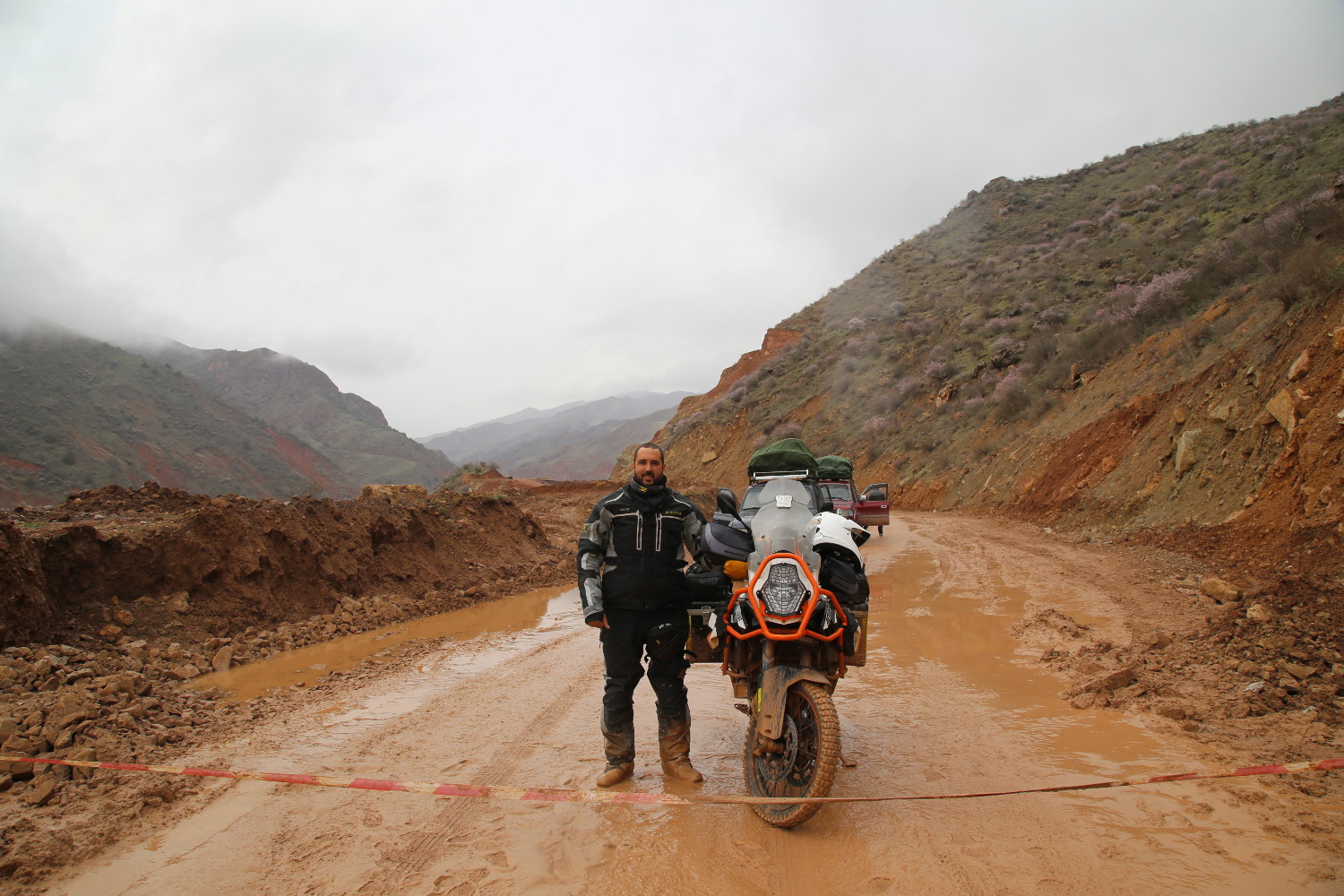 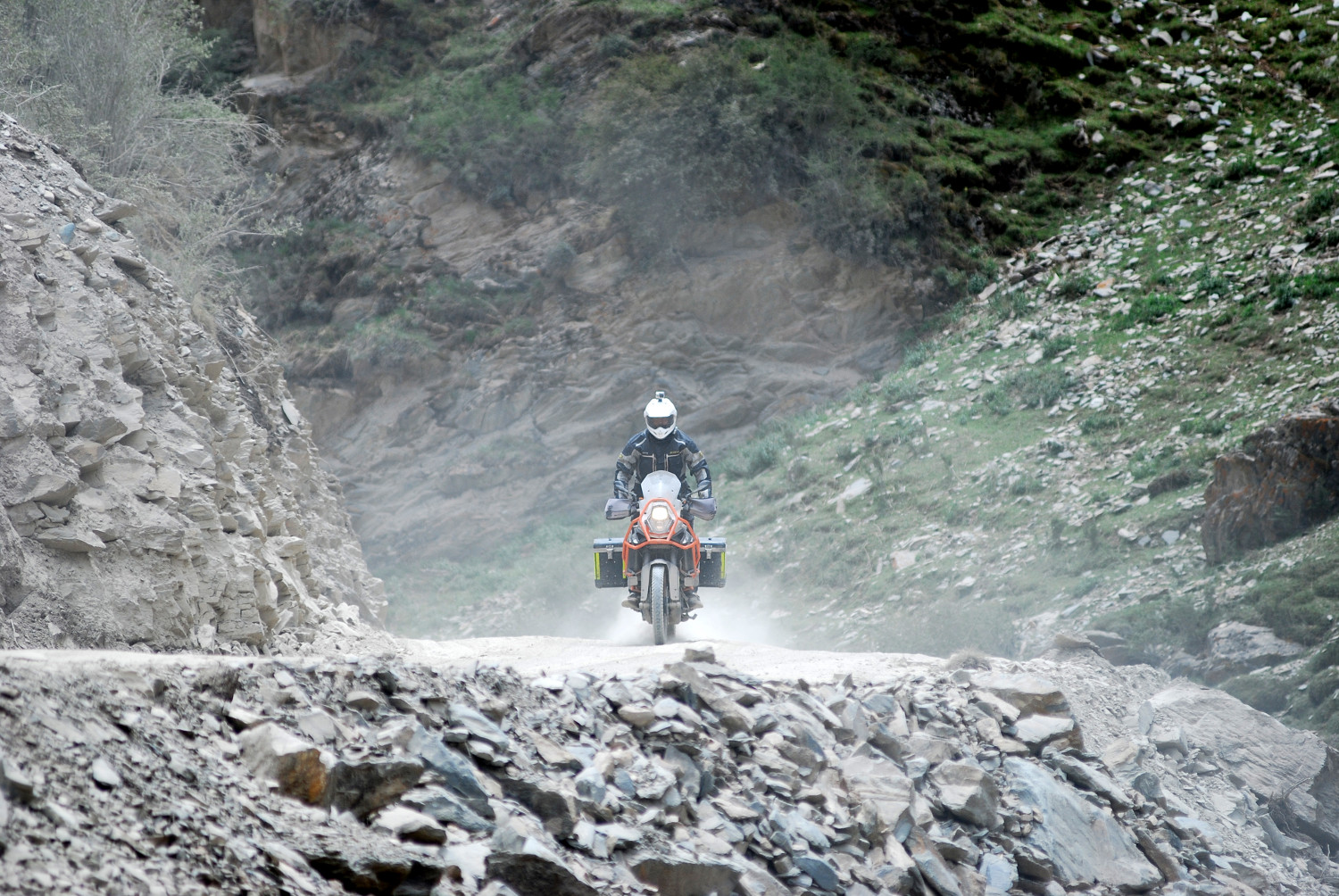 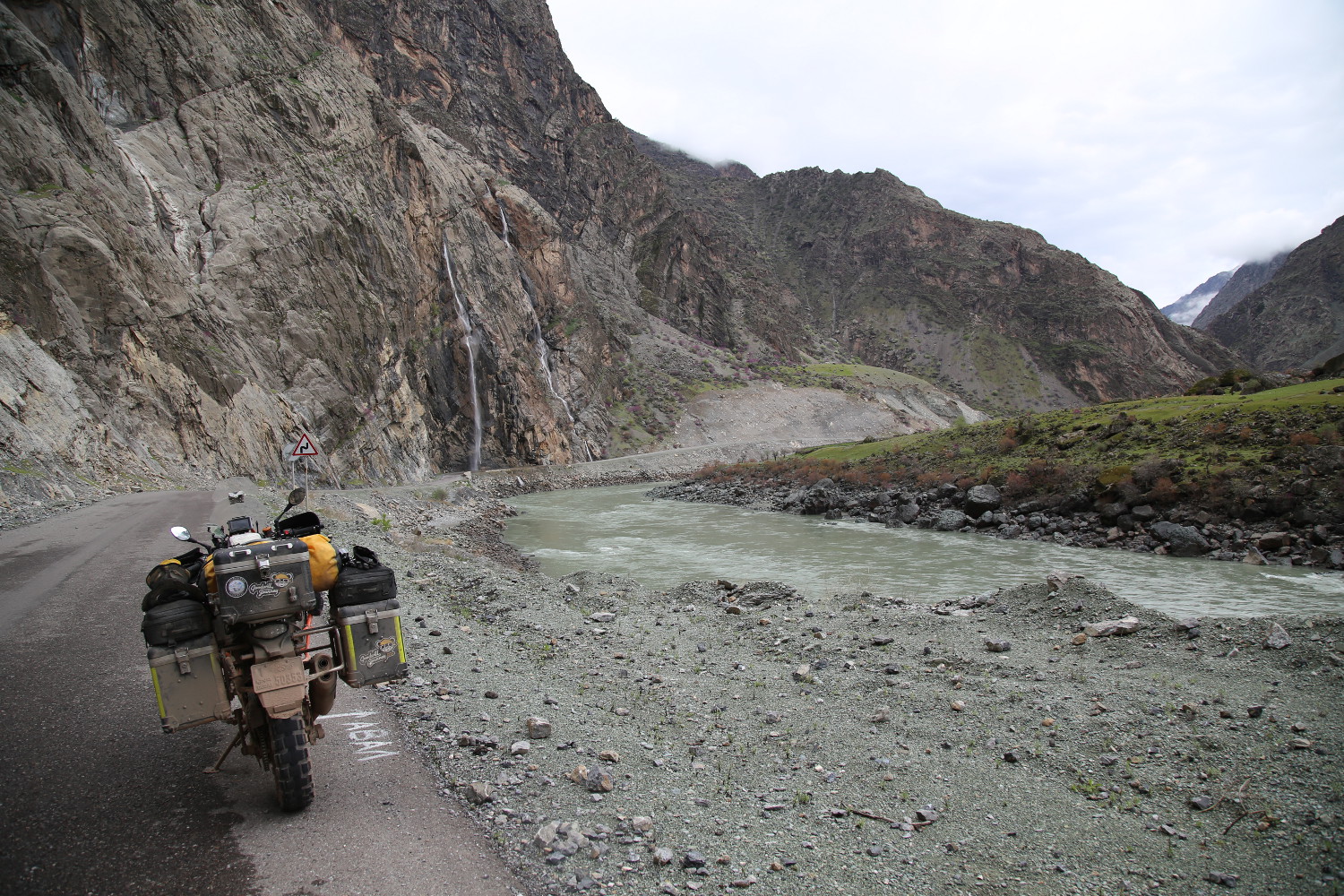 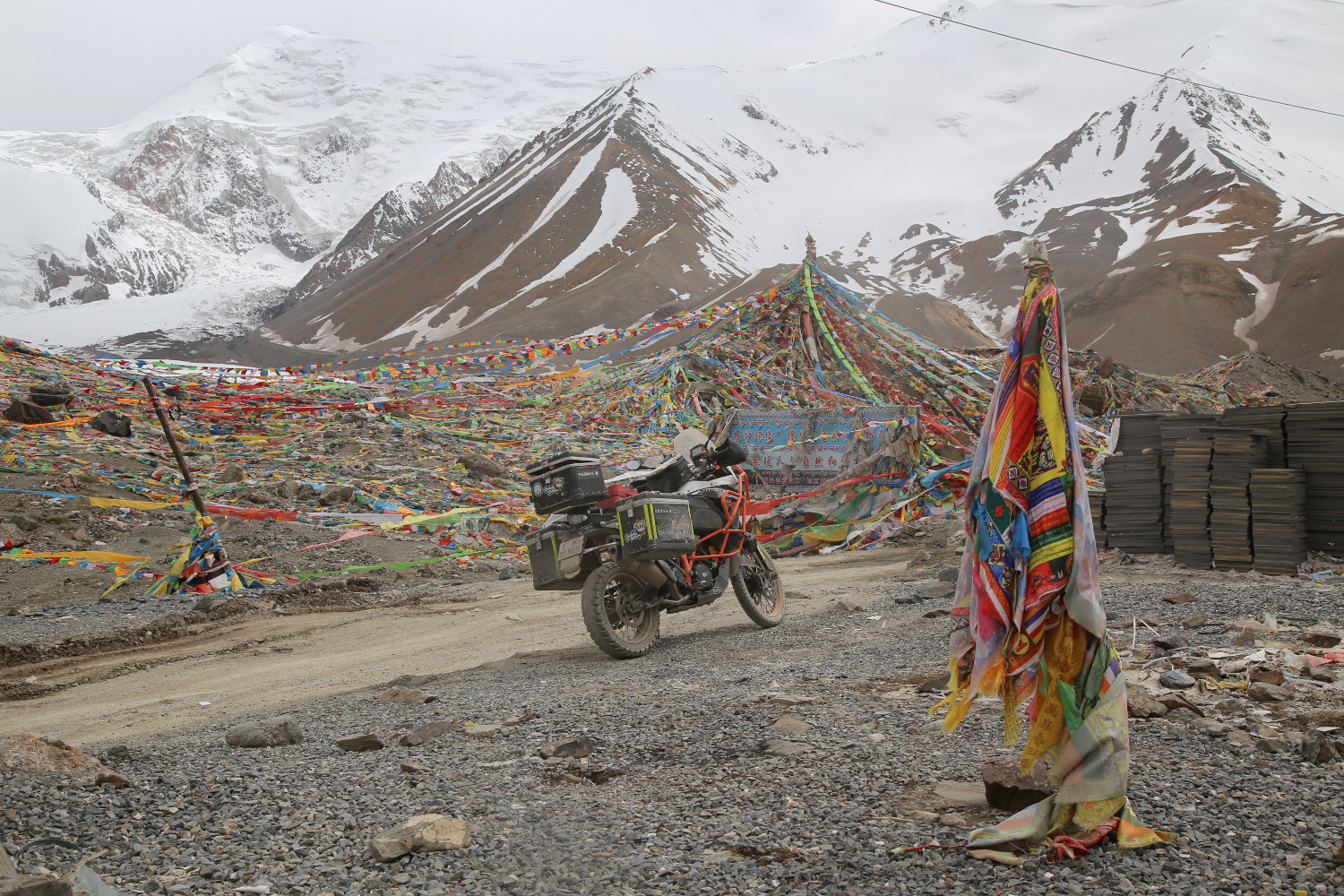 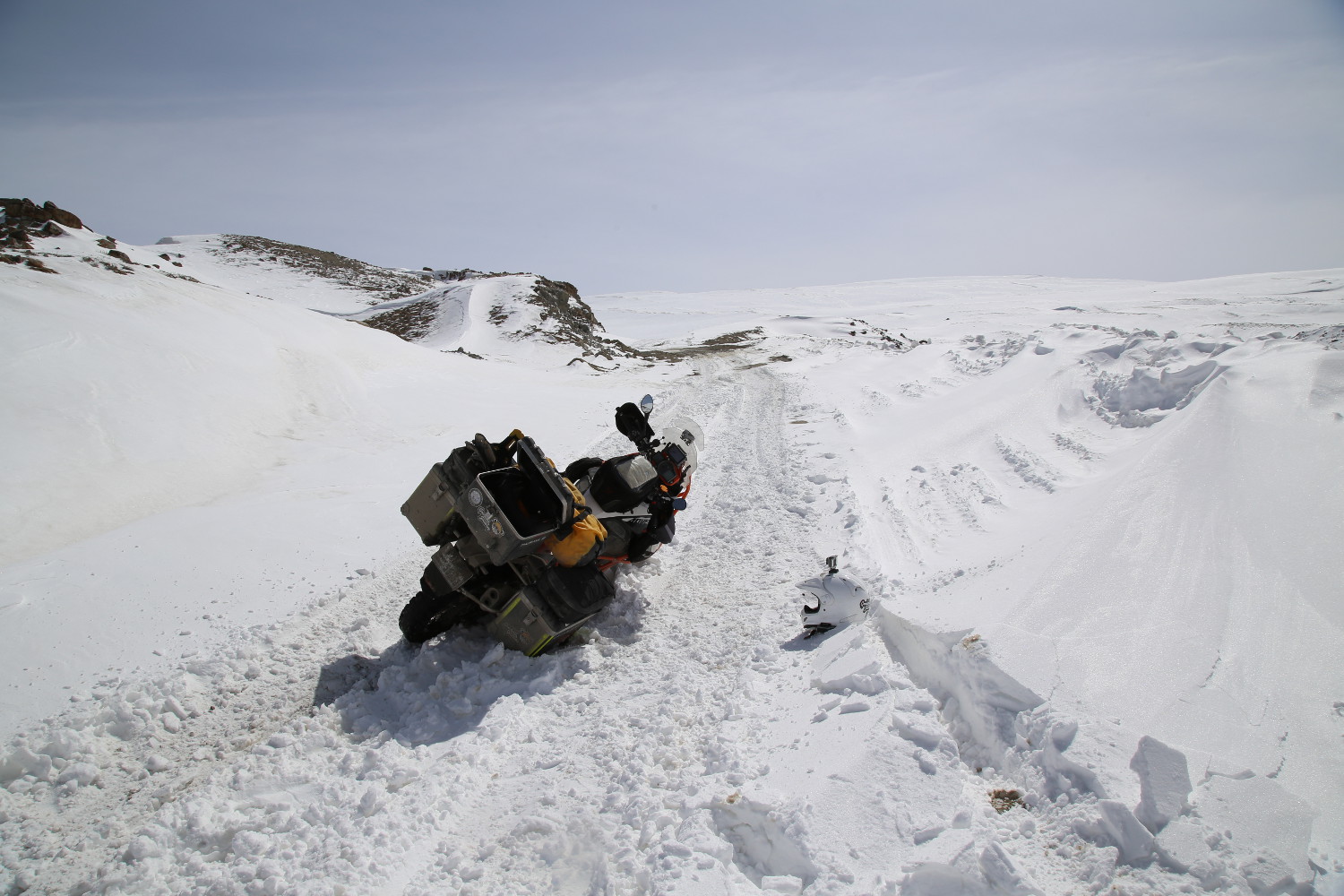 With many amazing stories to tell on his unusual trip, with kindness from so many people helping him survive the journey, we picked up on a couple of really interesting tales. On one of the days Wissam found a Vietnamese kitten that was thin and dying in the middle of road. He put her in his tank bag, having lost his spare clothes bag off the back of the bike, and stopped every so often to give her food and water.

“I was riding in Laos trying to reach a place close to the border of Vietnam to cross the next day. At a certain point I noticed that I was missing one of the bags that is mounted on top of my left pannier, it had half of my clothes; mainly winter clothes and looks like it got loose and fell off. I turned around and went back hoping that I can find it, but after going back almost 15 km I lost hope and decided to leave it and move on. I turned around again to continue towards Vietnam when I spotted something in the middle of the road that looked like a small rat, but when I got closer it was a kitten that was so thin and dying. I think she gave up and lied down in the middle of the street to end her own suffering.”

He was travelling towards Thailand where he hoped a friend would adopt the little kitten, but this journey was not without incident. During the journey from Vietnam, where Wissam had to be escorted by a guide – typical of many countries in this area – the biker was hit by a truck on a tight mountain road. The truck was in the center of the road coming down the mountain, and the driver hit the left pannier of Wissam’s bike while shoving him off the road into a drainage channel. Despite the tank bag flying off in the collision, the kitten survived 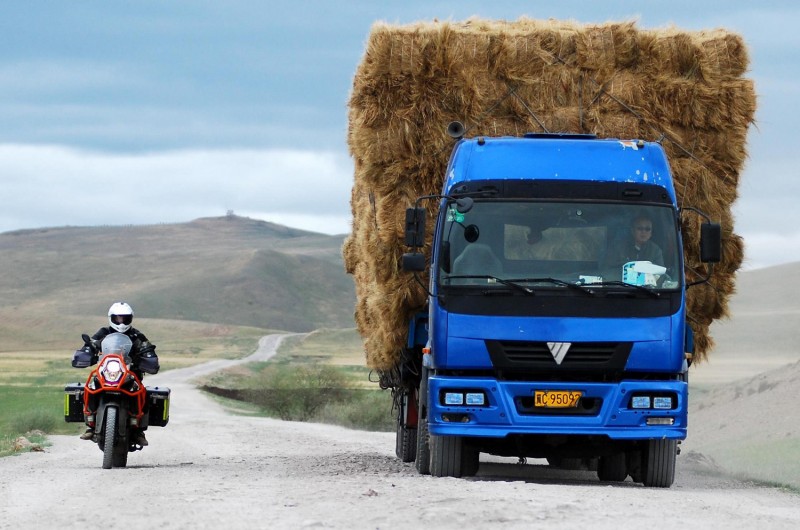 After a crazy situation where some of Wissam’s belongings were stolen by people who had initially helped him and then found by the police who supported him with his video evidence of the crash, as well as an X-ray that confirmed his hand was broken, the bike was practically taped back together to get it to Malaysia or Thailand for proper repair. Wissam’s hand was put into an adapted cast so he could ride on, and the kitten actually found a really lovely home in a restaurant close to the crash site before Wissam departed!

Also during the journey Wissam also managed to sink the bike after days with little food and he was exhausted from the freezing temperatures at night and no sleep he made a mistake judging a river crossing .

“A lot of you might not know me in person but believe me when I tell you I am not the type of guy who gives up easily, however in the last few days the thought did cross my mind and I honestly felt like going home. After my last post I woke up early morning happy as I still had only 100 km of desert and then it is paved roads all the way to Ulan Bator; which means the ride in Mongolia is done. 30 meters from where I left a river was in the way, and I crossed that with no issues, then 100 meters more another river showed up. I had to stop and think about it as it did look deep.”

“I tried asking if there is another crossing, I tried going left and right, but I could not find any other path. I saw some old tractors parked on the other side and I asked them if they can move the bike across, but it seems they did not understand. Finally a car came, they tied the car to the tractor and pulled it through the river. When I saw the car going through the river did not look deep and I did not understand why was the tractor pulling the car, but I found out later. Anyway I made the decision to cross over and went for it. It started well then the river got really deep. I noticed that the water was almost above my knees when I looked down, and by the time I looked up again I noticed that I missed my exit point. I tried to correct my path but I could not, something was pushing me down the river! What I did not notice was how strong the current was; I made a mistake and I paid for it. I dropped the bike 5 meters away from the river bank where it was less deep, but still deep enough to flood the whole bike and engine.” 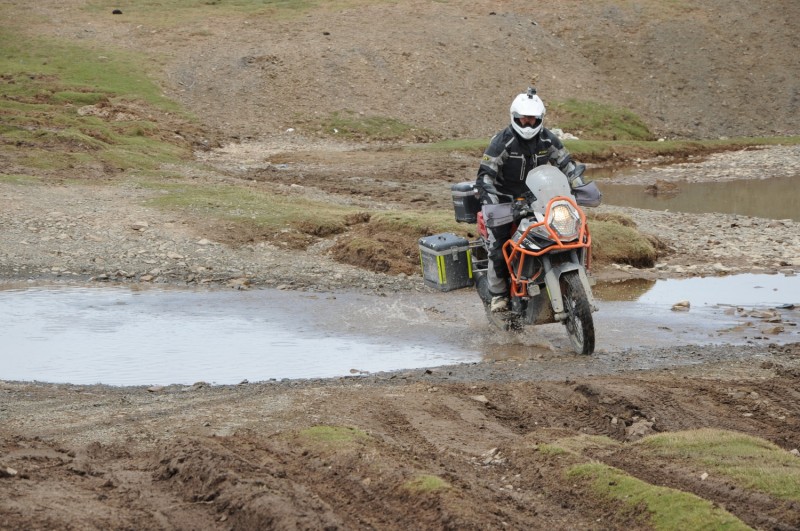 With soaking clothes and everything he was carrying ruined, Wissam was forced to organize the bike to be raised out of the water. He could not communicate back home to tell them what was going on (they could see he had stopped due to GPS), and despite taking the bike apart to push all the water out he had to wait some time for oil. Despite trying to separate the oil and water from the bike, this was a huge obstacle. He found someone to help and had to wait for a delivery of oil from the next village, but this took over four hours.

“The guy who helped me offered me a bed in his tent. He, his wife and his son slept on one bed and they gave me the other bed. They also fed me and asked for nothing in return. I put my head down to sleep and five minutes later someone walks in the tent and explains to me that the governor of a near by village wants to see me. I was wondering why! I went to the tent where the governor was waiting for me and when I went in he started saying “Tseren, Tseren, Tseren, ….” I told him I speak English I don’t understand what you are saying, then he handed me his mobile and there were some English messages from a friend of mine in Mongolia and her name was Tseren Enebish.”

“Tseren was introduced to me by another friend of mine and she is a public figure in Mongolia and a very well respected lady, she managed to find me in the middle of the desert and send me the governor of the nearest village to the middle of no where to help me within a few hours. It meant my friend could call me and he had a motorcycle mechanic next to him. They asked me to put oil run the engine for 20 minutes, throw away that oil, then put 3 liters of diesel instead of engine oil and run the engine for 2 minutes then put new oil and continue my ride.” 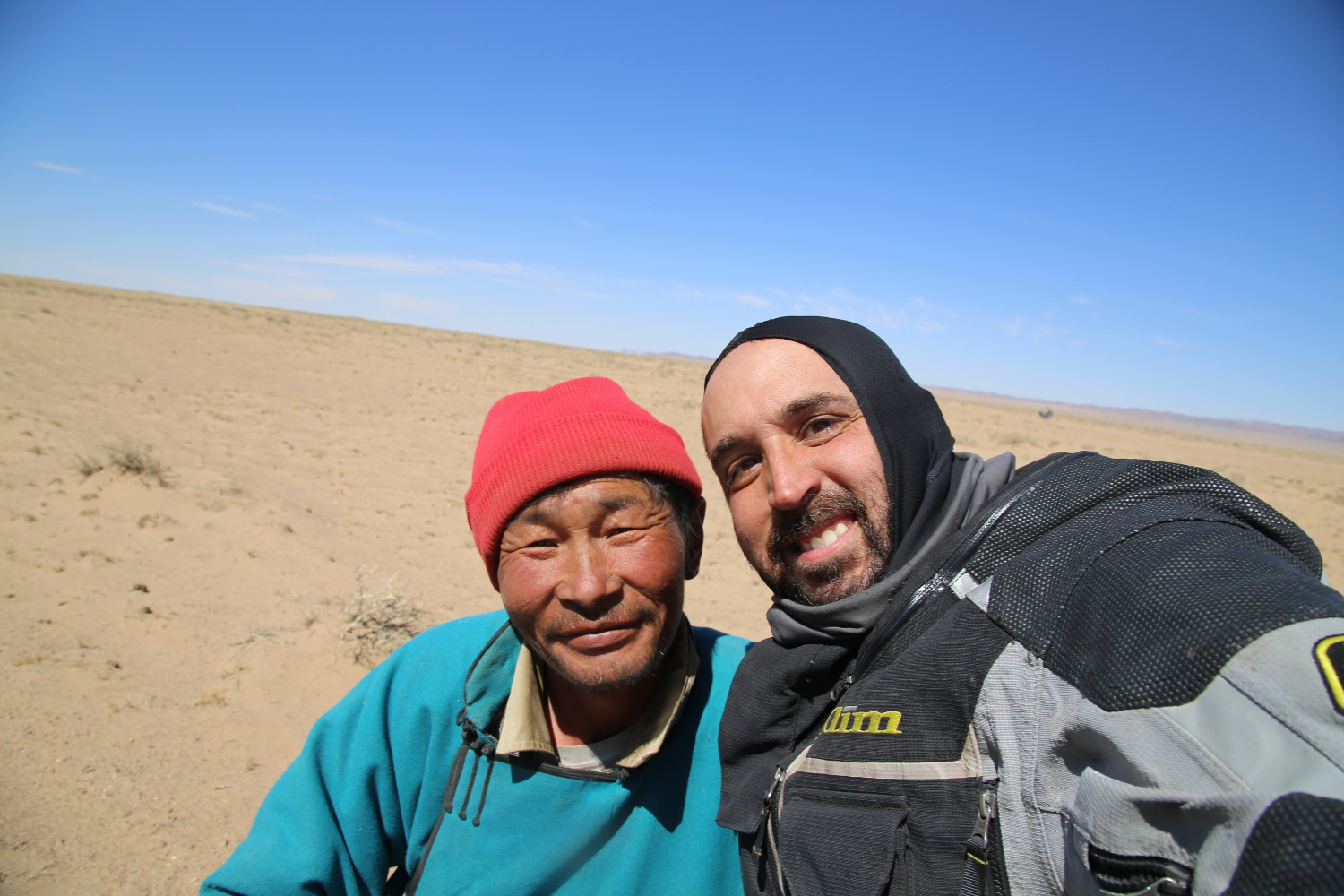 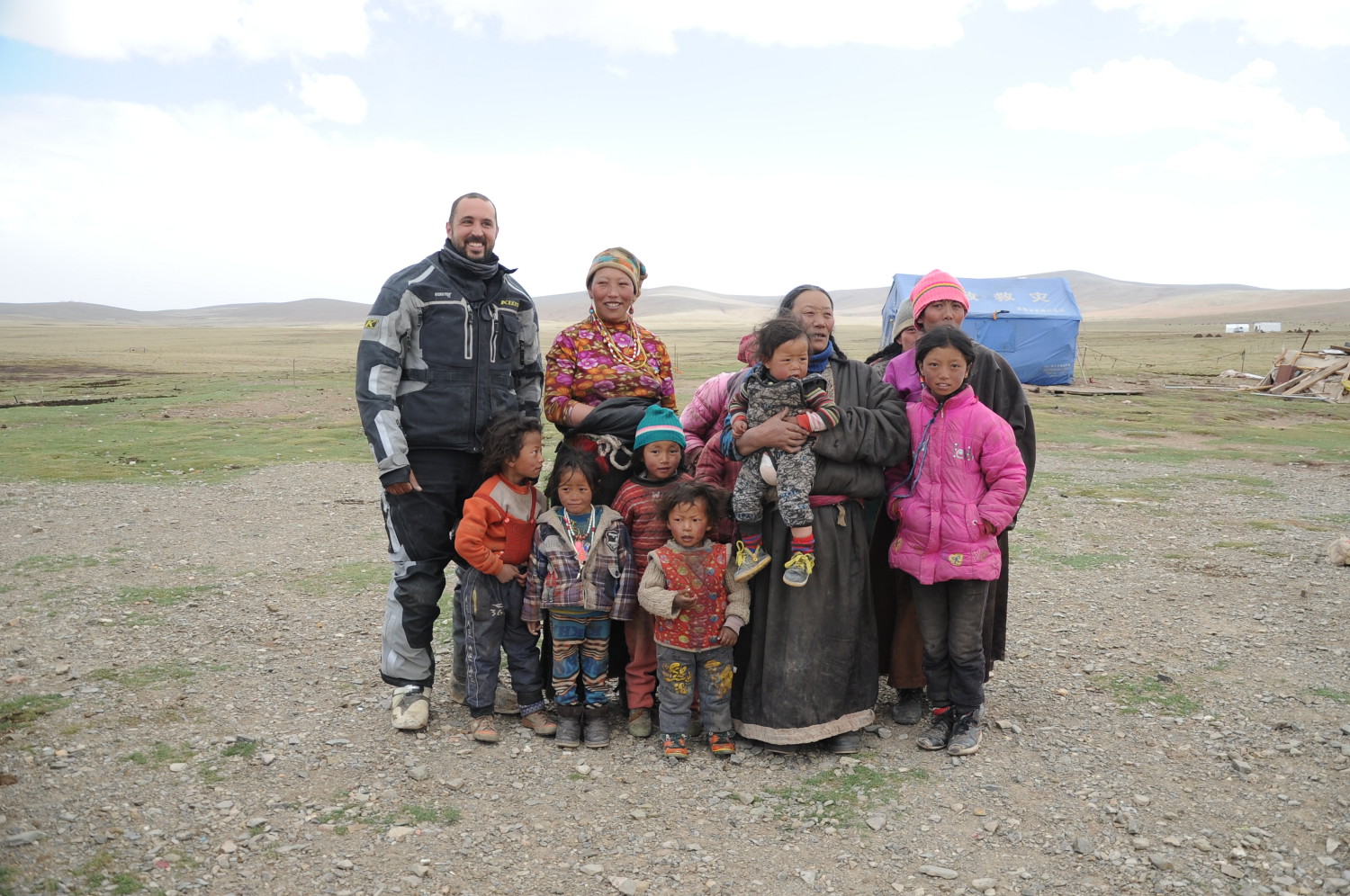 Wissam had to wait for more oil, but after finally getting up and running he noticed a leak from the oil filter cover. When he went to tighten it the bolt snapped and the bike lost all of its oil. He managed to find a KTM dealer in Ulan Bator and had to take a pickup to get the bike there, where the local dealer helped as much as possible.

“The dealer was very nice and professional, they took the bike, rechecked everything and re-cleaned everything, washed the engine with three oil changes and fixed the screw then ran diagnostics. They gave me a new seat cover and did not charge me for anything. Mongolia’s roads might be the harshest roads you can ride in the world, but its people are the nicest you can meet. Everybody helped me regardless if I knew them or not and asked for nothing in return. The people with so little gave me so much.”

Talking about the bike, a KTM 1190 ADVENTURE R, which has really been tested in the harshest conditions, Wissam says it really is special.

“To be honest the difference is massive between my KTM and other bikes I have used, there is no comparison especially when it comes to reliability. The KTM outperformed the last bike I had in every way. In 50,000 km I popped a fork seal, which is still used for 3000 km offroading before rebuilding the fork and I burned a fuel pump that, to be honest, was my fault. Russian fuel is very dirty and in Asia it is normally bad, I did not change my fuel filter for 33,000 km and it got really blocked, overworking the pump and that burned it out. However the bike still didn’t stop, I had to go slow until I reached my destination and then I changed it.” 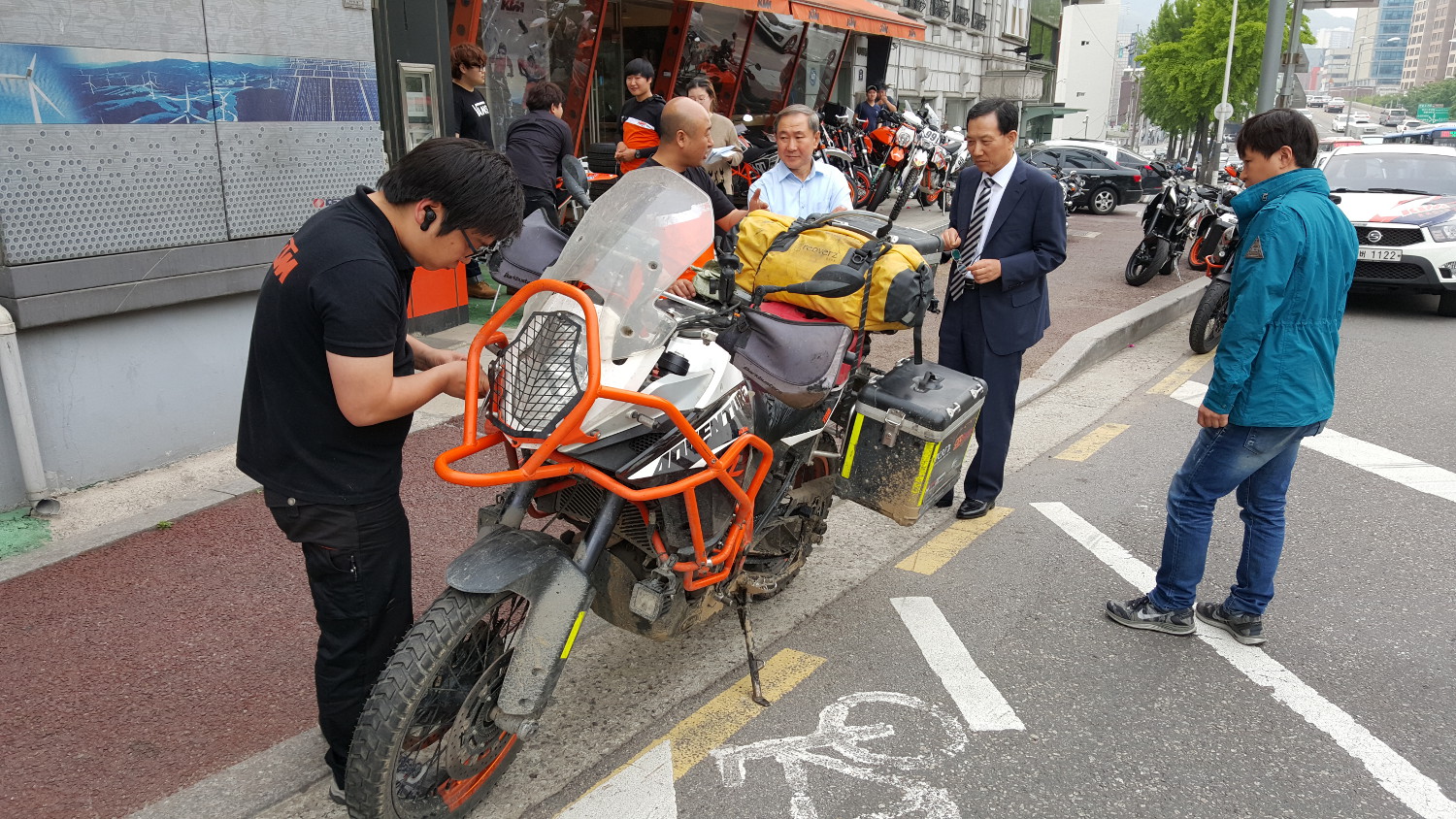 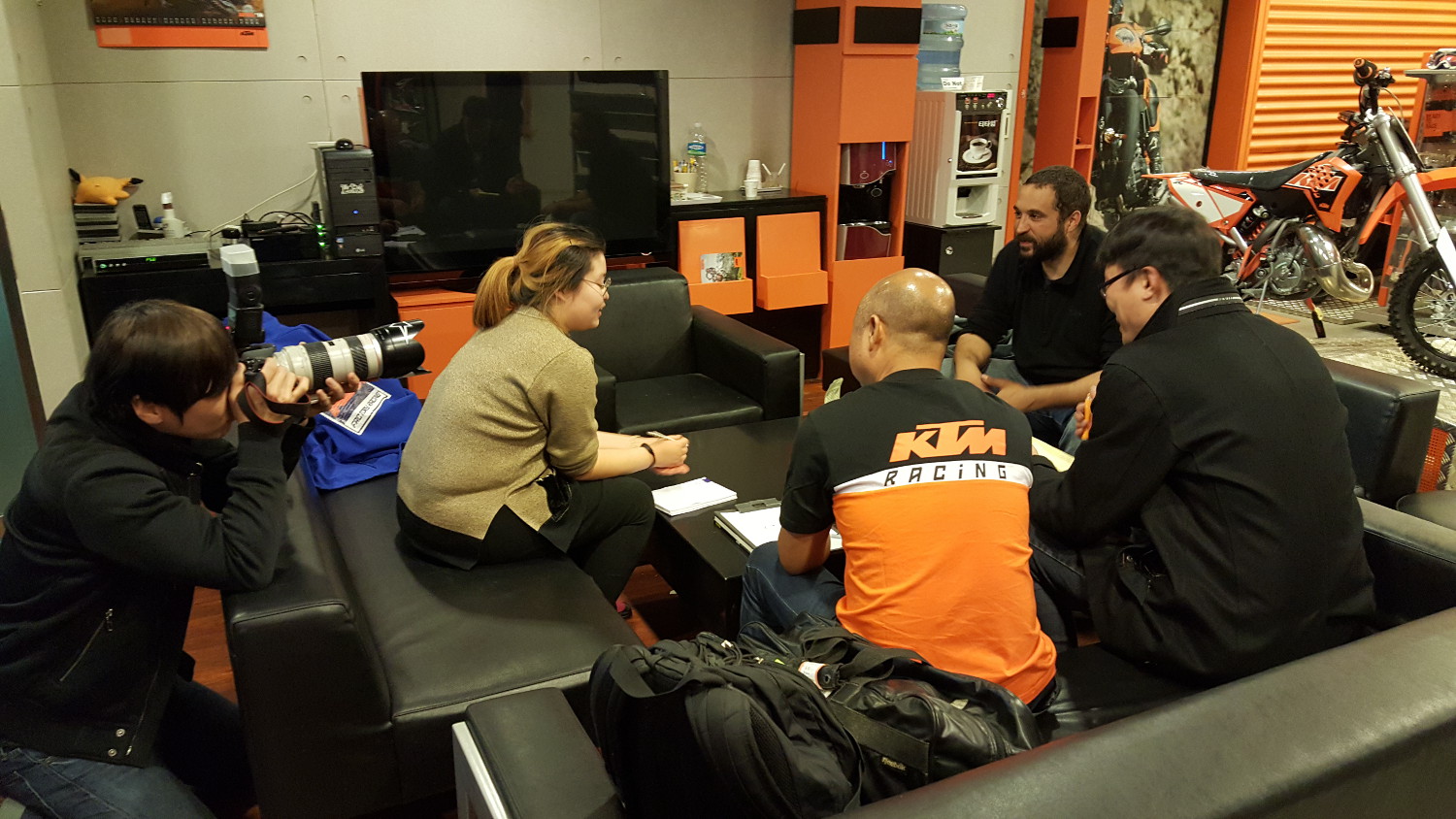 “I would like to add one thing here which is very important. The KTM dealers around the work will out preform any other dealer. They are so kind and so helpful to a massive extent they make you feel very grateful. They became my friends, most of them refused even to take money for their work. They changed everything that needed to be changed under warranty, all this gives you a total better experience than any other bike I have ever tried.”

Wissam’s journey continues. It’s taken three months for his hand to heal from that journey through Vietnam, and by the time the BLOG is published he’ll be somewhere in Australia, determined to cover the next 33,000 kms. His belief is that while his journey is tough, so is the life of the children he’s doing it for – they deal with much more on a daily basis than most deal with on a lifetime. His goal is to raise over 2million USD. 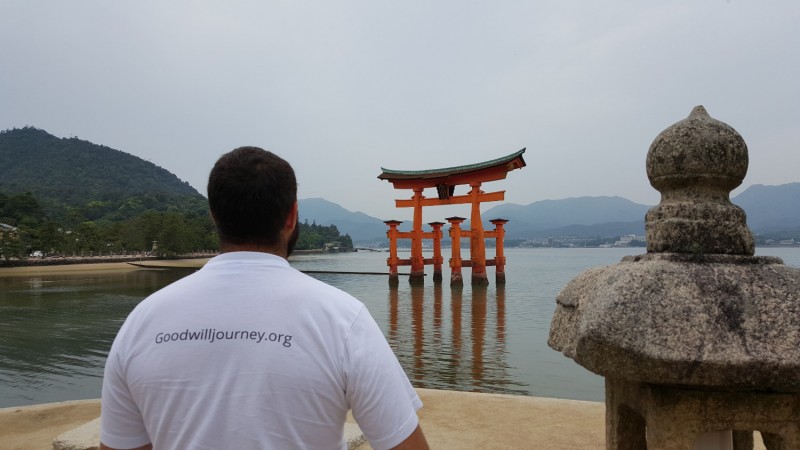 For more information about The Goodwill Journey click here.

161 Responses to The Goodwill Journey