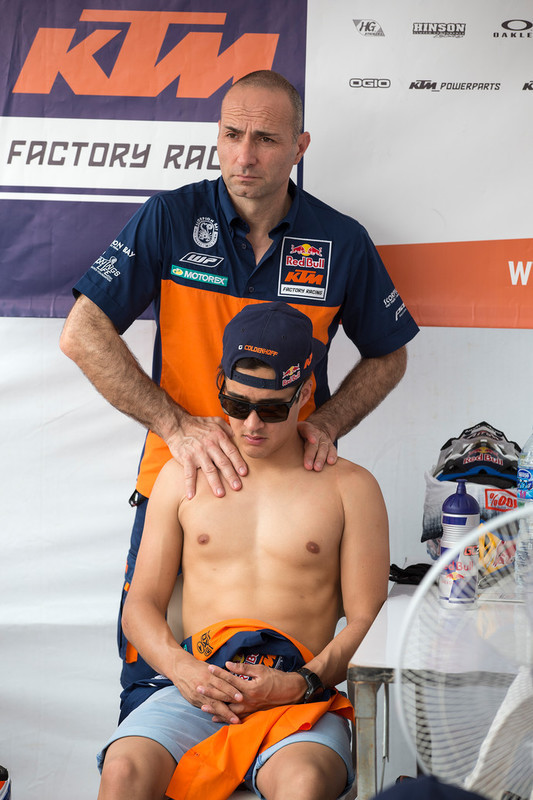 The most common injury in MX & how to fix it

With MXGP into full European swing we picked the brains of Red Bull KTM Factory Racing’s physio Giuseppe Chiodi on the bulk of his work at each Grand Prix and the biggest problem he addresses for the likes of Cairoli, Prado, Herlings and co …

Former sprinter Giuseppe Chiodi almost always greets you with a smile. Perhaps it is because most of his MXGP patients in the KTM family come to him with a grimace. The 50 year old has been the physical problem solver and ‘go-to’ guy for ‘orange’ athletes and those principally in the factory team for three years and has been part of the paddock for half a decade.

As an ex-athlete himself Giuseppe carries a build and a physique like he could easily tackle one of the 30 minute and 2 lap motos against the world’s best, but we are both sipping a cappuccino on this occasion as we wanted a talk and to ask the Italian about the bulk of his work across the busy period of 48 hours that is a Grand Prix, with nineteen rounds in total of MXGP, thirty-seven motos and all running from February to September. 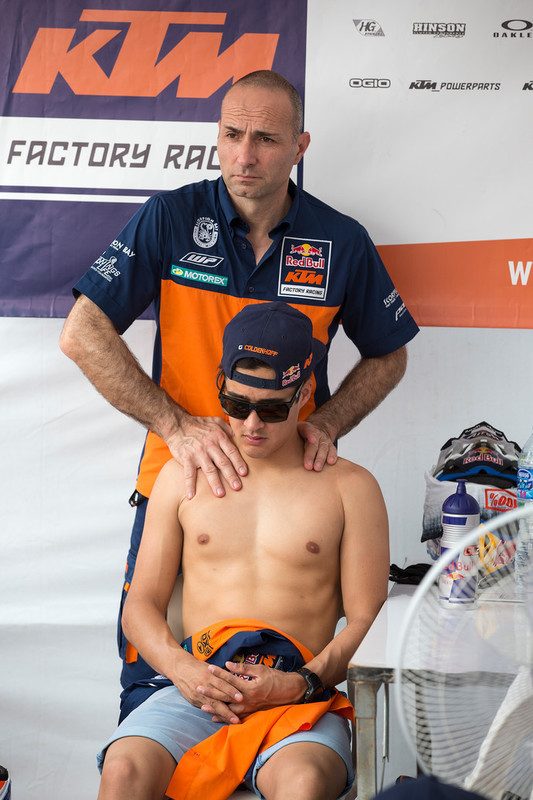 Chiodi is a smart man. Thanks to his own sporting experiences and then ideas on treatment and towards the body, he has travelled extensively gaining more insight on the human condition. He has created new training and treatment through studies in motocross, tennis and athletics and especially a method to help people with neurodegenerative diseases like multiple sclerosis suffers improve their quality of life. The system is being developed in conjunction with two universities in Rome. “It is all based on treating the people and not the disease,” he says. “Each person has specific needs … and the results have been great. The universities are creating a scientific protocol to demonstrate the techniques and training are more effective than traditional methods for MS patients.”

This morning, in the sunshine of the paddock of Pietramurata for the Grand Prix of Europe we are here to talk about motocross. “These guys are considered like the Iron Men of the athletics field by professional trainers,” he says with the help of a translator. “They are not normal athletes. They have to manage their bodies but also the bike. It means a different kind of preparation because you have to focus on your own body but also the demands of moving 100 kilos around a rough track.”

Motocross is tough, demanding and withering: perhaps the hardest motorsport on two-wheels simply because of the intensity. MXGP has an impressive medical center and radiography setup at each European round to treat the most serious injuries – the breaks, fractures, dislocations and wounds – but what takes up the majority of Giuseppe’s expertise and time in and around the KTM awning? 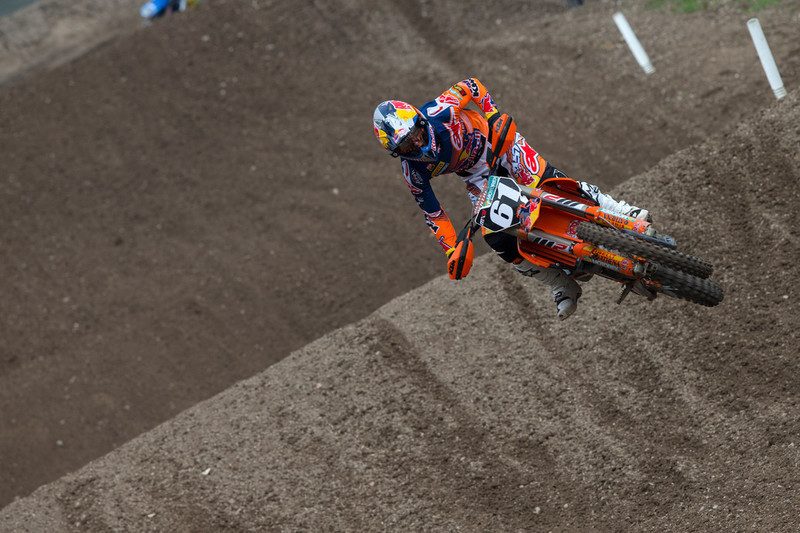 “The typical injuries tend to be the muscular, and fortunately most are low-intense problems that can be solved with a session of treatment,” he reveals. “What is really important is immediate intervention otherwise the muscle could lose up to 50% of its power and efficiency. A critical time in this sport is between the first and second moto; you have to react straightaway and that involves deep local massage to stretch the muscle. Then you can also use taping – and I use a lot of this with the KTM athletes – and then a general massage to recalibrate and rebalance the body.”

It is hard to contemplate the amount of impacts, stretches or strains that MX athletes suffer but what is quite curious is how Giuseppe views the entire picture. “The body is a whole system and if you have a problem or injury in one part of it then you have to act locally but then also get a rebalance of everything to be in good shape and maximum performance.”

Chiodi stands out through a form of treatment that has become more and more prevalent in the MXGP paddock over the last five years. “Taping has been very famous in athletics for over fifteen years so I brought my athletic experience into motocross,” he claims. “Taping here is even more effective because it deals with the impact, the movement as well as the muscular contraction. When I was travelling in the Far East I learned new techniques and had access to new materials.” 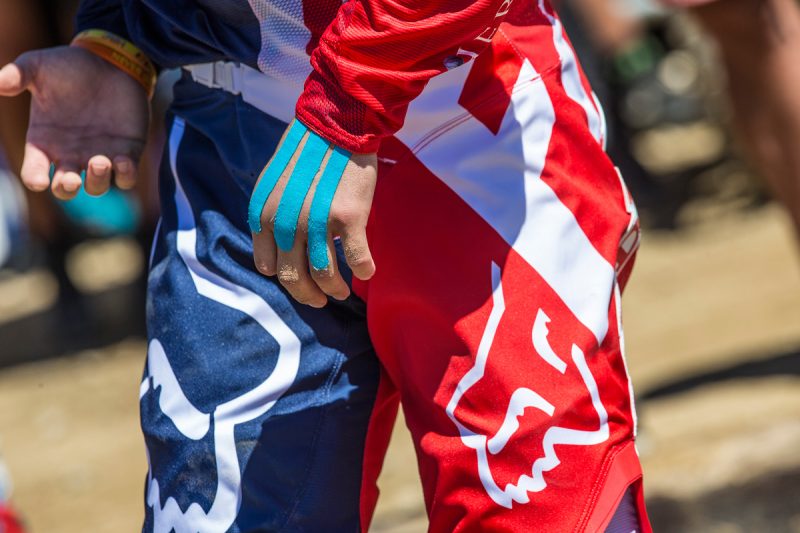 Using Kinesio and the initial theory expounded by Dr Kenzo Kase in the 1970s, KTM athletes can now be spotted with weird and wonderful fabrics stretches across their joints. “The tape carries a different effect because there are waves with glue and without, and the intervals apply a ‘pulse’ to the nervous system that can last up to twenty-four hours,” he explains. “You can use the tape in this way but also to pull and hold a muscle against a contraction. They keep developing the tape, for example there is material that stretches and moves in one direction but not in another and this is particularly useful if, say, the rider has an ankle injury and needs limited movement for the brake or gear levers: they will be able to make the race.”

Chiodi has even taken his skills and beliefs deeper into the sport and discovered a solution to one of the oldest complaints in motocross. “Arm-pump is a big problem for riders and in the past required some attention to the forearms and even surgery,” he says. “After studies with magnetic resonance and Doppler echocardiography we discovered that arm-pump is down to the posture of the riders. On the bike they tend to have a position where the shoulders are closed and this causes blocked circulation and nerve problems. So we looked at the upper back muscles in order to have a better and new posture and with the shoulders open. It was something that changed their health and helped with the problem. The same technique is used by the Italian Federation where I am a member and train there. It has also moved across to MotoGP with the same positive benefits.”

Rapid courses of treatment through an MXGP extends to Giuseppe’s manner and even his presence; there is little doubt that he has become an important part of the Red Bull KTM Factory Racing Team in the role he plays. “Psychology is an important part … but the rider basically wants to know that everything is OK, then they can reset and concentrate on the race.”

The life of a factory athlete can encompass many considerations but it is also re-assuring for the riders that there are important ‘mechanics’ for the body as well as the machinery.