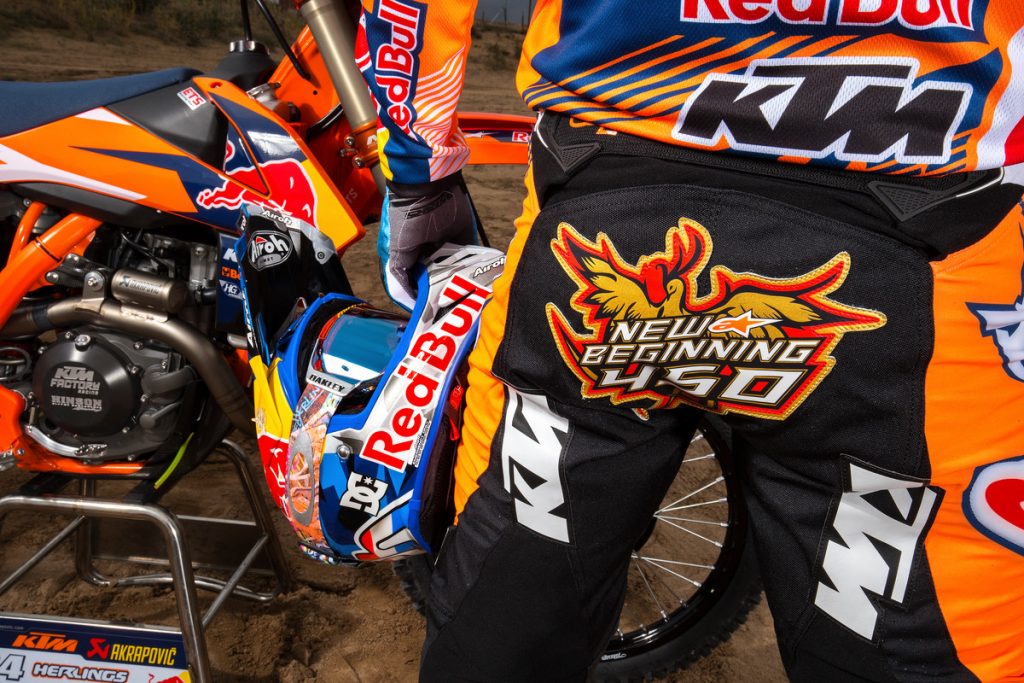 A fresh challenge for one of the very fastest offroad motorcycle racers in the world in 2017 as twenty-year old Jeffrey Herlings moves up from three FIM World Championships in the last five years in MX2 to tackle the ‘big boys’ of the premier class in MXGP. We asked the Dutchman and the Red Bull KTM crew about the transition from pushing the limits on the KTM 250 SX-F to the KTM 450 SX-F …

It all started so well. Sparkling from a third MX2 title and victory in the final Grand Prix of 2016, Jeffrey Herlings made an astonishing debut on the Red Bull KTM Factory Racing 450 SX-F by winning the MX Open class and almost taking the Netherlands to Motocross of Nations glory at Maggiora last October. A winter of testing and practicing was only briefly interrupted by a swollen wrist but then a heavy crash at the final round of the Italian Championship at Ottobiano led to a broken right hand and #84 was fighting for fitness prior to the opening round of his MXGP debut in Qatar and the Grand Prix of Indonesia a week later. 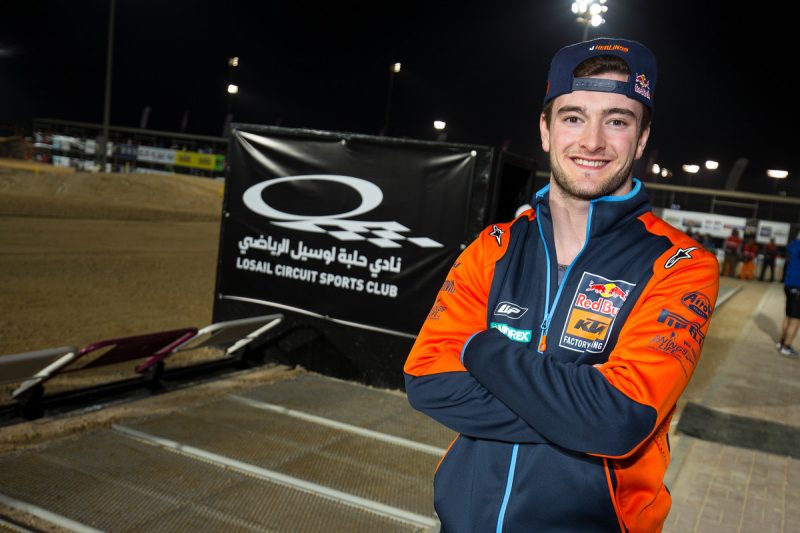 Motocross fans have yet to see the KTM 450 SX-F/Herlings combination in full flight but the prospect is coming fast. In MX2 Herlings was a tour-de-force of speed and results however now he faces an MXGP lineup where the entire top twenty of the current standings have previous experience of what it takes to make a Grand Prix podium.

The KTM 450 SX-F and KTM 250 SX-F share remarkably similar traits and dimensions and the weight of both bikes varies by only a few kilograms. But it is the physics within the engine that forced a change of style, mindset and even physical prep to push the limits. The switch from one bike to another is bigger than you might think. “The 450’s characteristics with the engine and the rotating mass make it seem like a heavy bike,” affirms Herlings’ race mechanic Wayne Banks. “The weight is actually quite close.”

Herlings may have shone at the Motocross of Nations – arguably the biggest stage for the sport – but it was like a teaser for what work lay ahead. “I was still using my 250-kinda style and it just clicked … but that was one race,” he says. “To do it twenty times with that machine is a different story.” 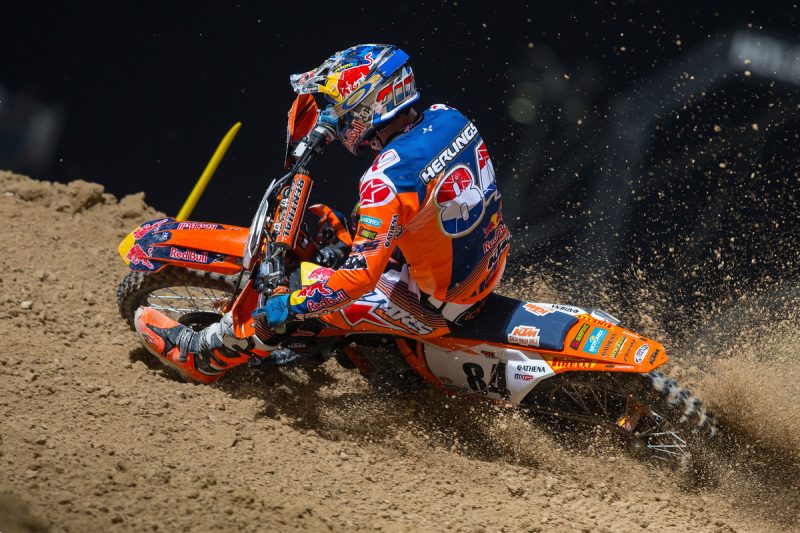 Dissecting how he can convert from being a world beater on one bike to potential Grand Prix winner on another Herlings has clearly given the matter some thought … especially after his costly spill in Italy. “A 250 has a lot less power so you can ride it differently and be a lot more on the gas, with a 450 I tried riding that way once and it turned out with a broken hand,” he explained. “I wouldn’t advise racing it like a 250! You can do it … but there is a big chance of going down.”

“The 250 needs to be revved and you need to push it to go fast but sometimes on the 450 you are going fast even when you can’t hear the bike! The torque is way-different: on a 250 it is up quite high and then on the 450 bottom-to-middle. It’s hard; you’ll be in a race situation and be thinking ‘get on the gas!’ but you cannot.”

“Not being able to use the 250 style means you are riding differently … and that needs a different setup. On the 250 I was always hanging on the back and was wide-open. No chance for that on the 450 so I had to make some adjustments.”

Cue the expertise of Banks, Team Manager Dirk Gruebel and the crew. “The suspension setup and getting the bike comfy for him and his needs was important,” the Australian says. “In terms of engine and mapping there is a lot more ‘tunability’ to 450 whereas with the 250 you want full power and he’s a heavy guy so he needed everything we could give him. We had to get the 450 power usable and not too aggressive and the testing time has revolved around that and the suspension. The basic setup with handlebar, footpegs, tires can all be carried from the 250 but the rest was about normal progression in refining the bike for him.” 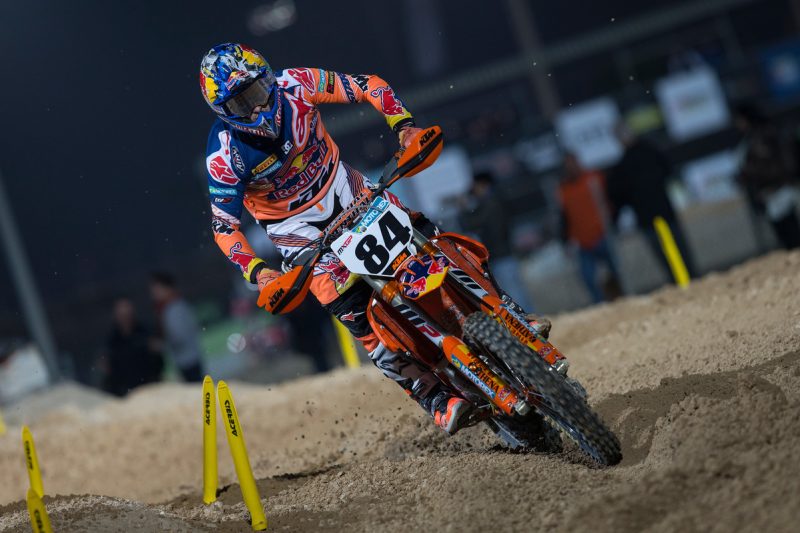 Naturally this process has swallowed much of the team’s work agenda and thoughts from last October onwards. With Herlings operating from his current team setup alongside MX2 riders Pauls Jonass and Jorge Prado (and not in the De Carli side of the awning with Tony Cairoli and countryman Glenn Coldenhoff) his crew also needed to help him adapt.

“When he first jumped on it then I think he was trying to ride it like a 250, high in the RPM, and you don’t need to do that with the 450 and the power isn’t really there,” Banks says. “You also wear yourself out doing that. I would say that he’s still developing and getting better and better every time he goes out.”

“We had some setups for him to try – an American, European and what Tony and Glenn use – but to be honest they are all pretty close at the moment. We had a process of elimination and for what would work best at all tracks to get to the package we wanted. There is a lot of ‘tunability’ with the mapping so he can get it to how he wants. I would say by the end of November last year we had a good package … ”

Herlings´ change of scenery even extends to the handlebar. “We also have the map select switch, which he didn’t have on the 250,” Banks comments while thumbing the unit pinned next to the left grip. “He can go from a map that will work for the start to one that is a bit softer and tamer in case of the track getting a bit gnarly. We can taper it down so that it [the bike] doesn’t get away from him.”

Since his Grand Prix debut as a much-hyped fifteen year old Herlings has faced pressure, expectation and a hot spotlight. In MXGP two ‘rookies’ have earned the number one plate for the last two years but neither Romain Febvre not Tim Gajser tackled the opening events with injury. With over thirty races remaining in 2017 and the utterly unpredictable nature of the sport anything could still happen. One eventuality that almost every MXGP fan would accept is that #84 will sit atop the podium at some point in the next six months. 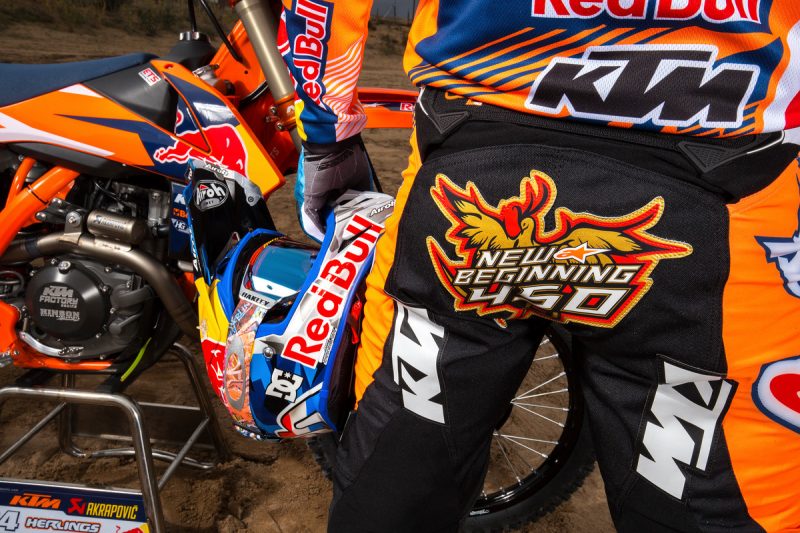 175 Responses to Interview of the Month: Going large – Herlings and the change to MXGP