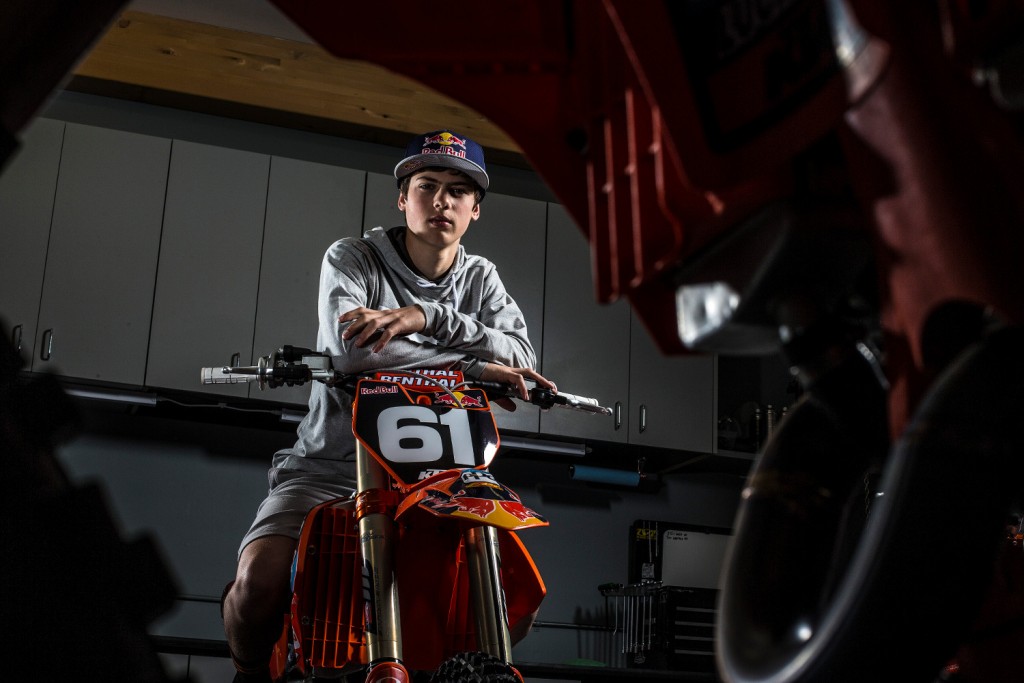 The next Great One? Jorge Prado

Spain is excited. After heavily blotting the motorcycle racing map with titles and talent in practically every discipline the sport of Motocross is finally ready to embrace an athlete that could complete the set – MotoGP, World SBK, Endurance, Rally, Dakar, Trial, Enduro – for the Iberian people. Sure there have been names like Javi Garcia Vico, Jonathan Barragan and Jose Butron that have compiled the odd win and podium at MXGP level but Spanish success to the extent that Italy, France, the Netherlands, Belgium, UK and even Slovenia have enjoyed in the last two decades has been missing. 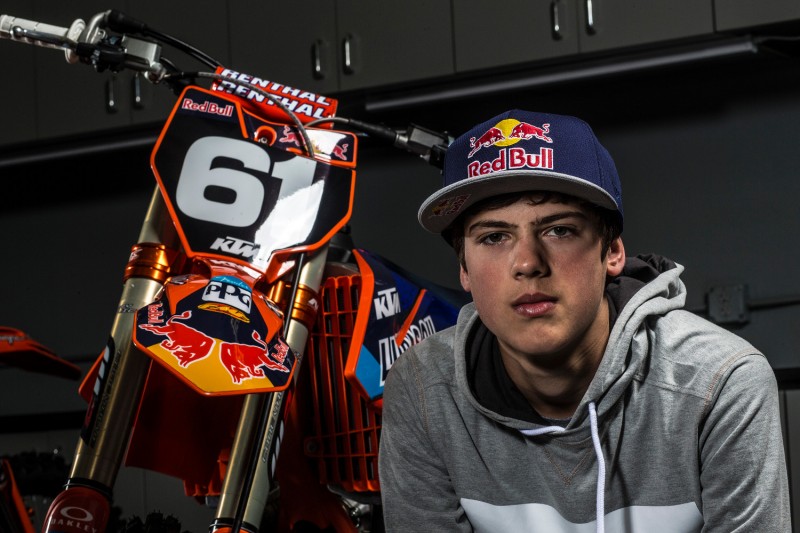 Onto the cavernous and almost empty Spanish stage comes Jorge Prado. Already a junior World Champion (65cc) and winner of the coveted 125cc European title in 2015 the recently-turned fifteen year old has excited Spanish fans, observers and experts inside the racing scene and industry to the degree that he will be a Red Bull KTM rider for another five years starting from 2017. Linked to Mattighofen and the grand plan of the racing department since his early teens Prado’s status has been blossoming.

Jorge and his family have been based in Lommel for several years since deciding to move from Spain and recognized that their son’s potential required grooming in Motocross’ essential territory for training and development (due to the community of riders, teams and tracks in the area). Almost enticed by road racing after a trial that attracted the interest of star spotters for MotoGP, Jorge stuck with Motocross, even though he has had to deal with some heavy injuries like a broken leg, ruptured spleen and a broken collarbone; the last ailment kept him on the sidelines last weekend in Holland when he should have made his EMX250 European Championship debut at the Grand Prix of Europe and in the feeder class to the highest level; the last rung on the ladder to the top. 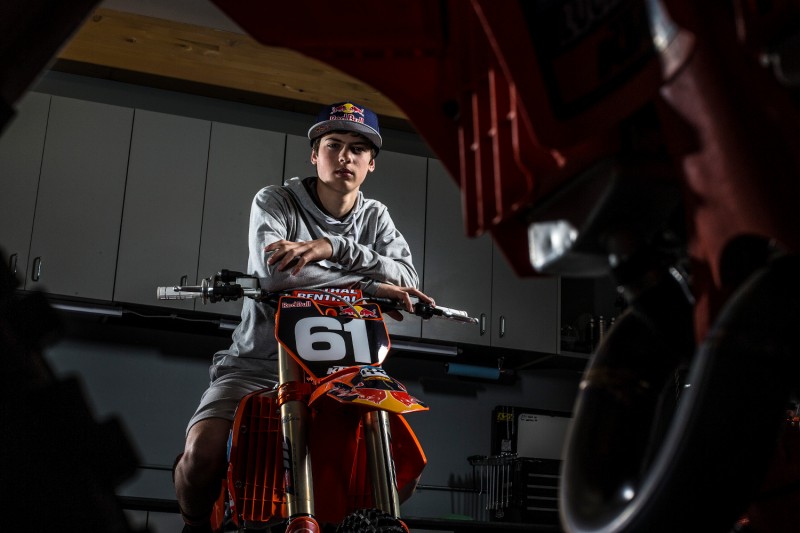 Jorge spent the winter in California training and trying his hand at Supercross and gathered yet more praise for his technique by the staff at KTM North America. So what is it about the kid from the Galicia region that has people so excited? Why is he so good? “It was clear to many people who saw or knew about Jorge that there was a kid coming up that could do things that other riders couldn’t or did not want to try,” says Photographer and owner of Spain’s biggest MX website Juan Pablo Acevedo. “I remember at his first Supercross race in Europe he amazed people by heading out onto the track and hitting all the jumps at the first go. It didn’t take much for everyone to know that he has the ability and the feeling on a motorcycle to do some special things. His speed and results on the 125 last year for example at just fourteen years of age was outstanding.”

“Haha! I’m good at starts!” the smiley and jovial Prado says when we ask him the same question. “I really enjoy myself on the bike and this is important. If you have that feeling of enjoyment then you don’t feel tense and you don’t get tired; that only happens in training sometimes! I also fight right until the last possible moment.”

“People tell me I have good technique and I think it’s true,” he adds. “I did a lot of Trial when I was small and I think this helps and makes the difference.” 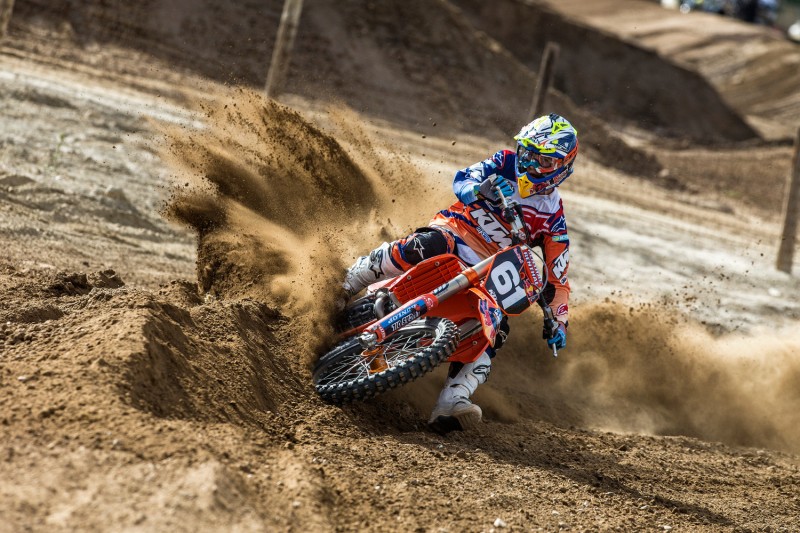 Prado is balancing studies and the ‘schooling’ of his rivals. His education is something the teenager seems to value (not only going quick on a bike) and he is closely guided by his parents who found employment in Belgium when they moved to make the family’s transition about a general change of life rather than a whim to indulge their son. Jorge himself knows he is already forming the foundation of some vital blocks that any aspiring athlete requires to make the grade. “I’m in the best team, I’m based in Belgium where I can train really well. I have a family that support me all the way so I have everything that you need,” he opines. “Yes there are times when it is difficult to combine racing with the schooling but we have it worked out quite well. In Belgium the winter can be tough and that affects training. If I wasn’t in school then I know I could travel somewhere else [further] to do that training. However I know school is important. In the future it might get difficult to do both so at the moment I am pushing hard! I have at least one more year [at the studies] but we will see.”

Living away from his native land – although he still competes in the Spanish Championship (it is where he picked up his collarbone injury) – means that Jorge has some distance from the expectation and pressure that his name has generated for several years and since claiming the 65cc world and European crowns in 2011 (the youngest to do so). However he is already a veteran of photoshoots, magazine front covers, TV interviews and plenty of attention. He is not immune or unaware of the hopes that a great many Spaniards have for their best charge in a generation but hasn’t yet quite worked out how to deal with it. “I don’t know,” he muses. “In the national championship – and being part of the factory team – people think that you should be automatically winning. From my point of view of course I should be winning … but it cannot happen every time and sometimes you have to accept what you can take.”

“There is a lot of people supporting me and one day I’d love to be the most successful Spanish rider but really I compete to be the best that there is, not just from my country.” 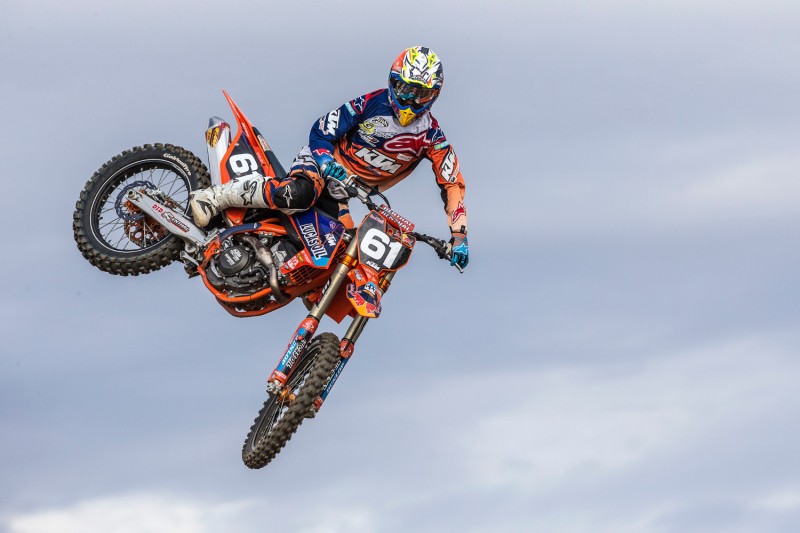 It is clear that there is a maturity about Jorge; one of those freaky characteristics that tends to typify many youngsters on the threshold of making an impression in sport. “I think one of the most important factors is that Jorge is totally committed and works so hard,” says Acevedo who knows and has generated editorial around the Prado family for several years. “He is still so young but through being in the Benelux region already for a few years shows that he wants to fully take the opportunity he has. I believe this is why he will succeed.” 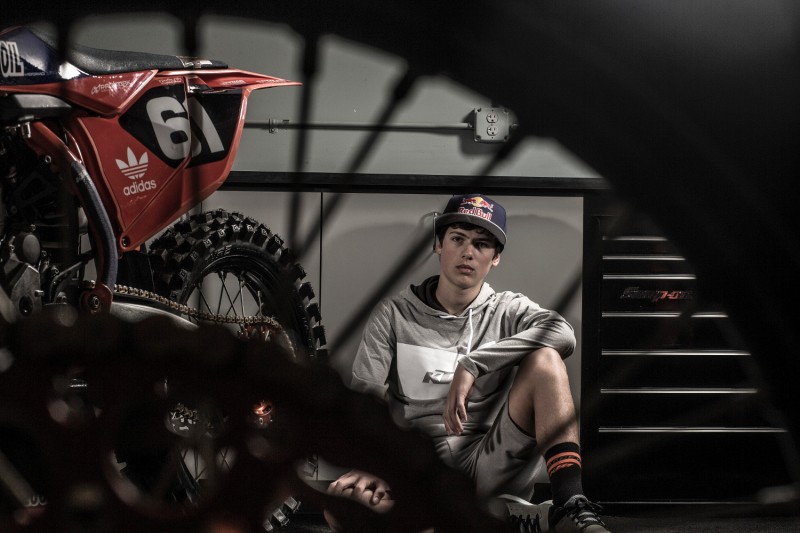 That determination will be crucial to master Supercross: a discipline that is not for the faint-hearted or the indifferent and is a form of racing that can bite the smallest mistake hard. Jorge gained some insight through his first and sizeable recent visit to the States.

“It was a great experience,” he explains. “Normally I ride and train a lot in the sand and this was a chance to ride the new bike [KTM 250 SX-F] a lot and get loads of time on the hard-pack. I also tried Supercross on those American tracks and really enjoyed it. It is a completely different sport. I imagined it would be similar to Motocross but it’s not! The bike is so different as well. I had a good feeling though. I think I improved with my riding.”

“In the first weeks I found it difficult but then I adapted and made a decent rhythm before coming back to Europe again,” Jorge goes on. “There were a few little scares but nothing too big!” 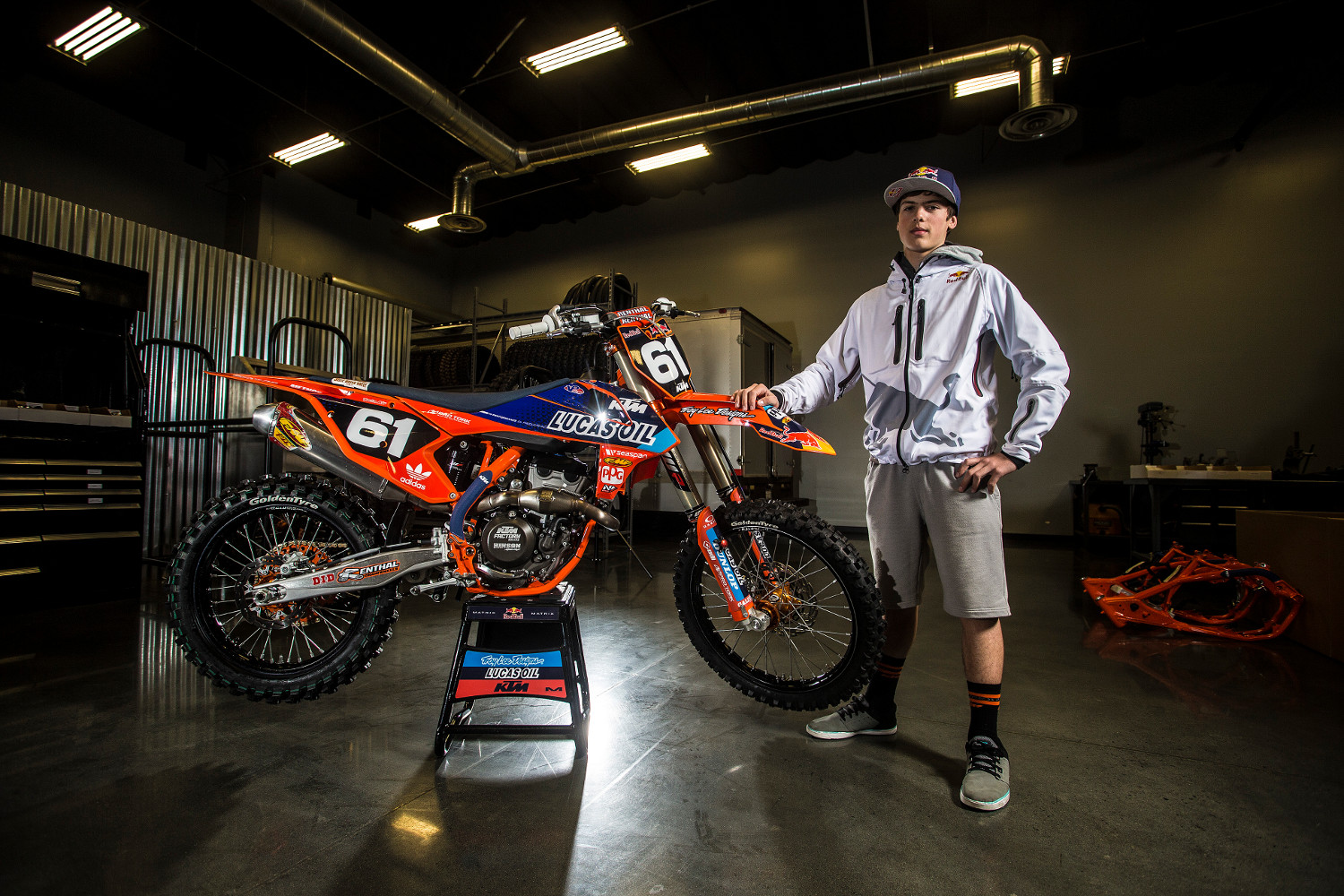 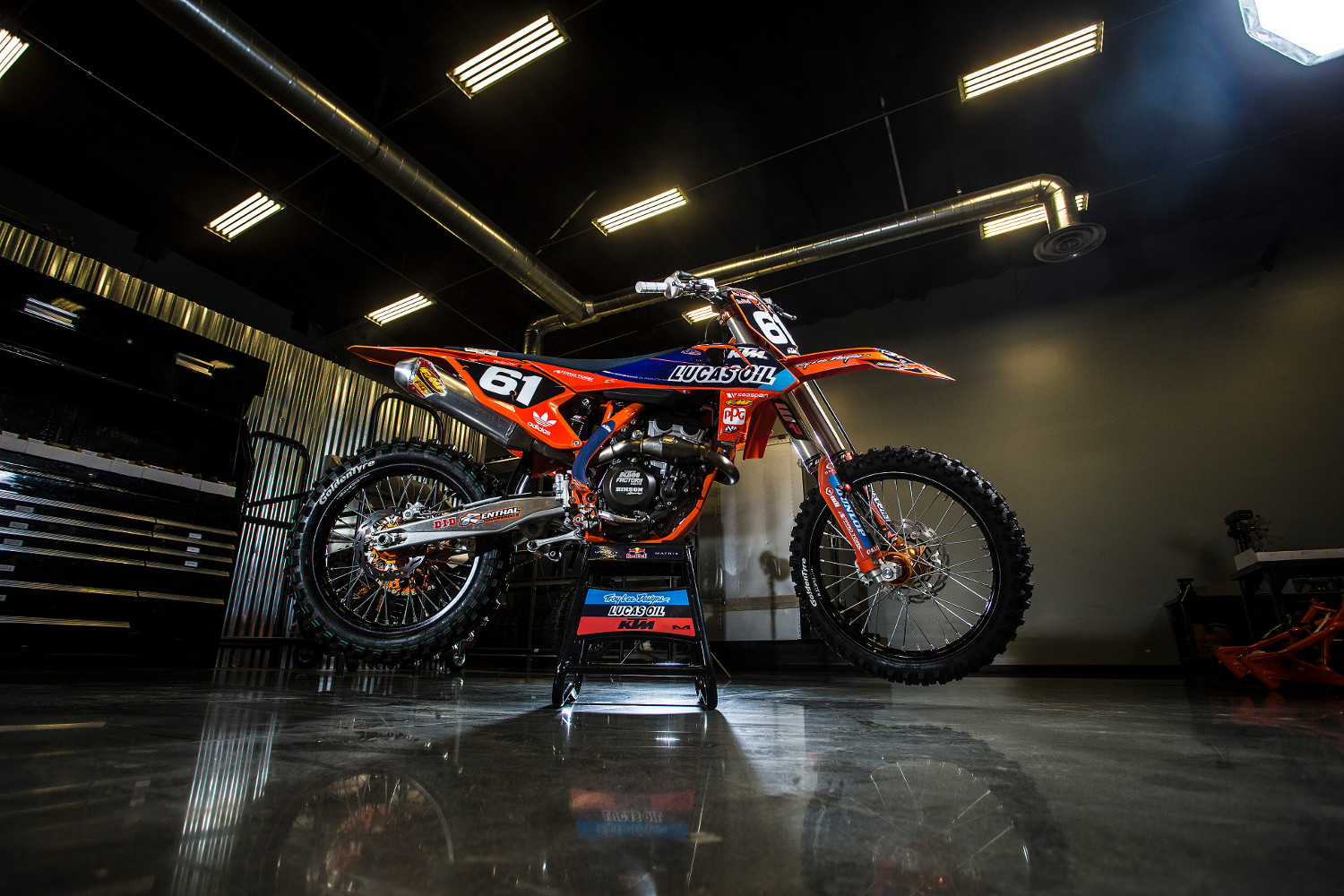 Prado has whet his appetite to gain credence in the stadiums and arenas of the U.S. and the open nature of his KTM Racing deal means that he can glide between KTM teams around the world depending on his – and Mattighofen management’s – plans. A Spanish MXGP World Champion would already be a ‘first’ and a weighty milestone. If Prado can follow in the footsteps of Europeans like Marvin Musquin, Ken Roczen and Christophe Pourcel in the modern era and have an impact in America then his profile could skyrocket at home.

“Seeing Supercross in the flesh was a different experience and I think if one day I could win there then it would have a big impact, maybe bigger than winning in Europe,” he comments. “I think I can get better riding there but I also want to do well in the world championship. It is not like I am desperate to run to the U.S. but I do I see the lifestyle is different there: waking up everyday and seeing sunshine! It gives you more energy. When you get out the bicycle you just feel better. We stayed two months in the same place but I think it would be another experience to live there full-time.” 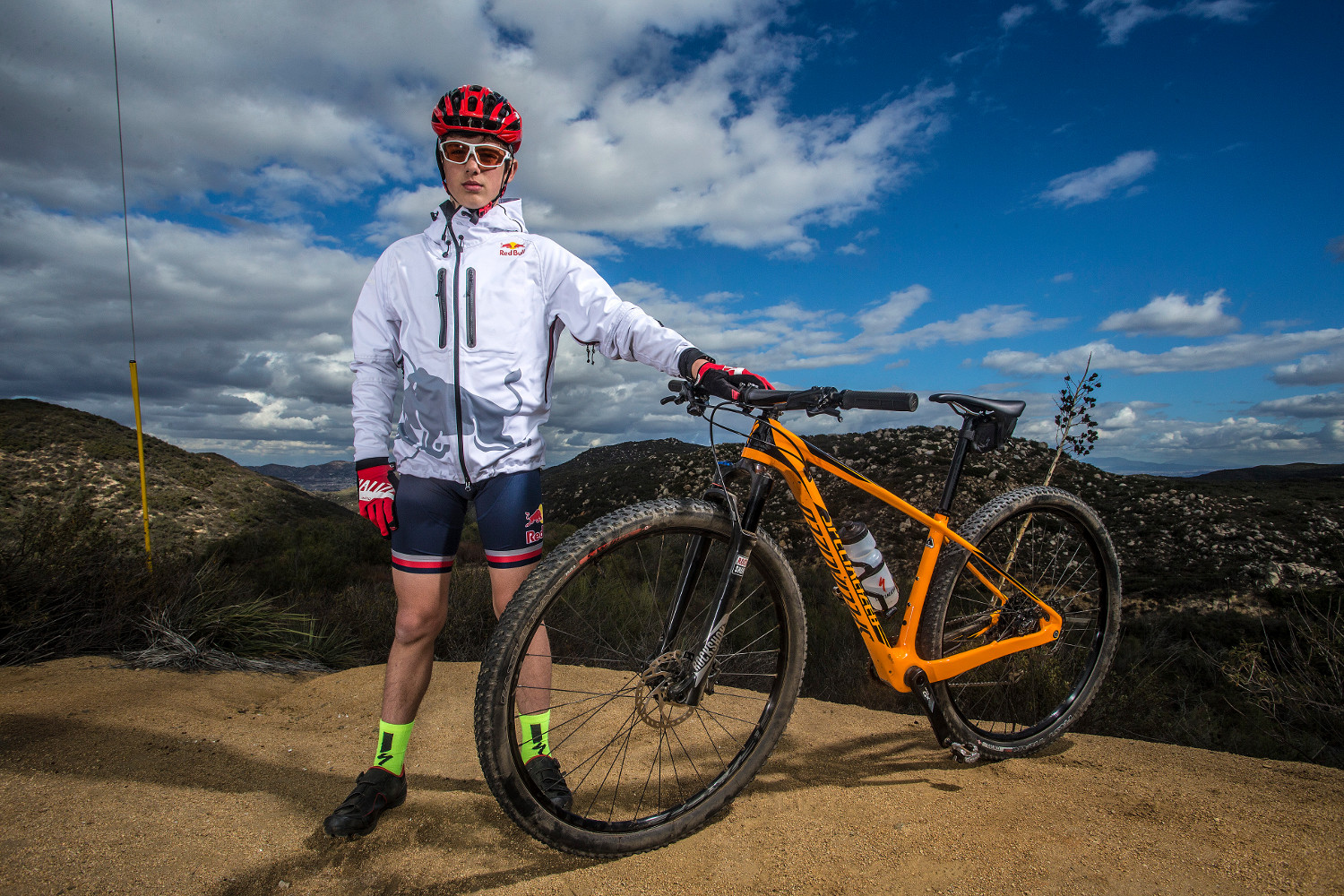 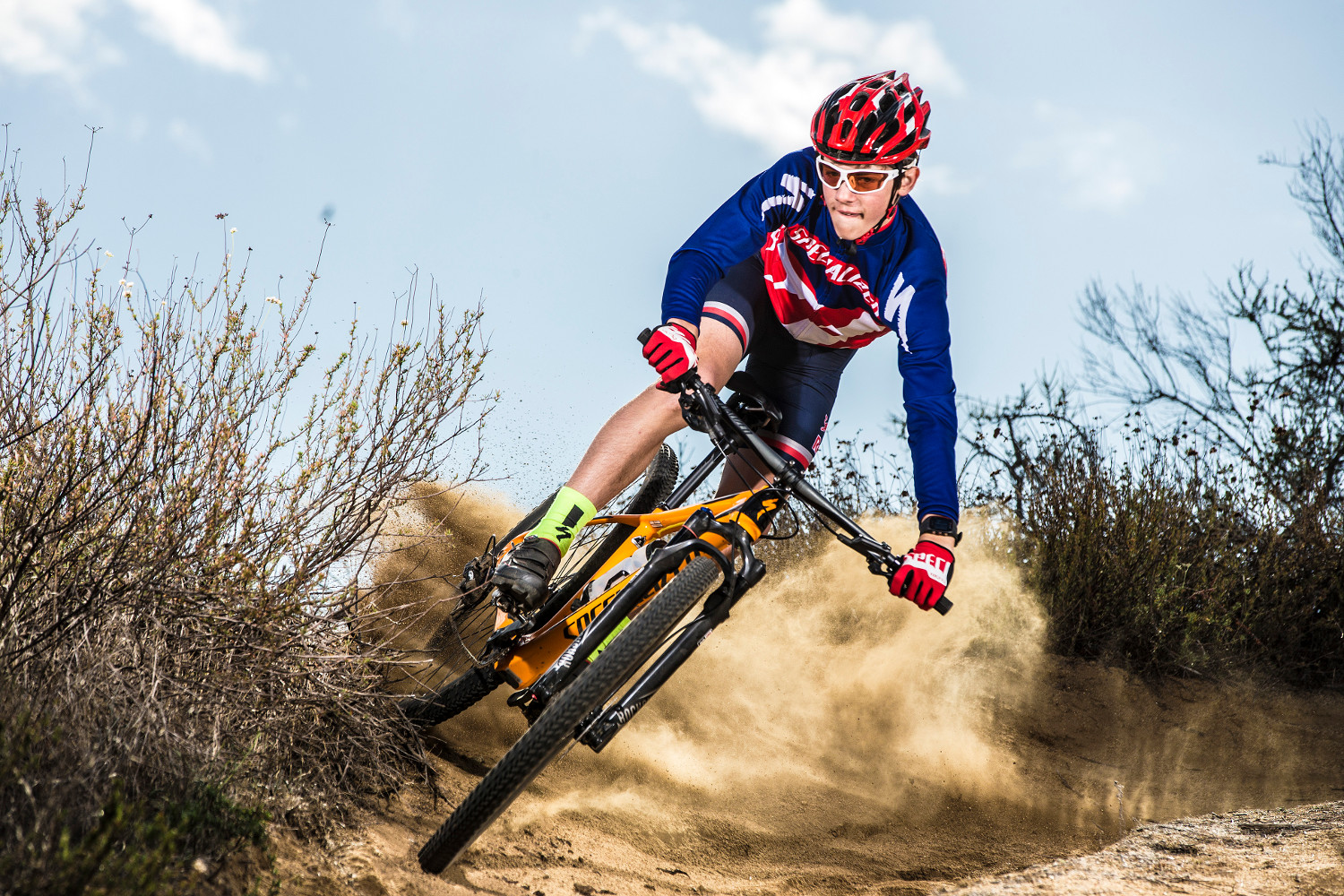 The final European Championship hurdle is already in Jorge’s stride pattern and he should be fully fit for the second round of ten meaning that another title in his first year in a class could be reachable. If 2016 goes well then expect a lift into MX2 or perhaps the 250SX class across the Atlantic already. “I don’t know for 2017 yet,” he says. “I’ll go to the U.S. again in the winter and if my speed is good then it’s possible that I will stay there. This is my fifth year and then I am due five more with the factory. I have so much support from KTM and Red Bull and that gives such a good feeling.”

By the sounds of things it could very well be Jorge providing those good feelings and not a moment to soon for MX fans the breadth of Spain. 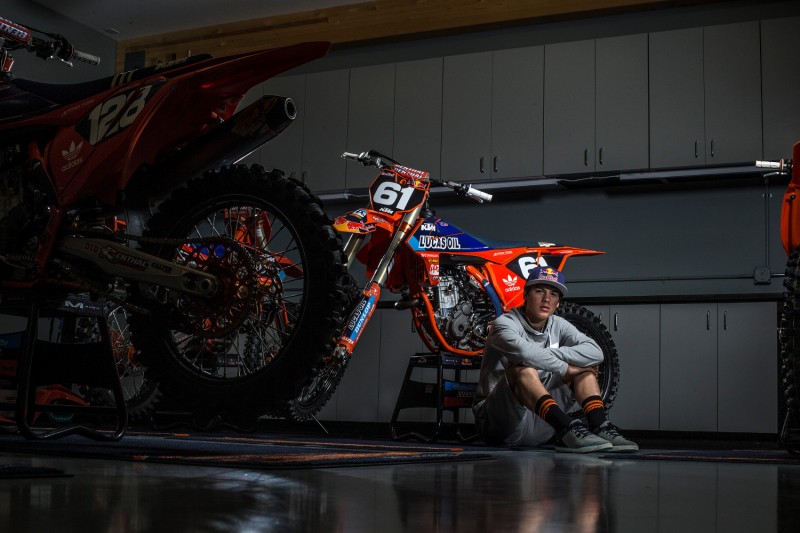 76 Responses to The next Great One? Jorge Prado