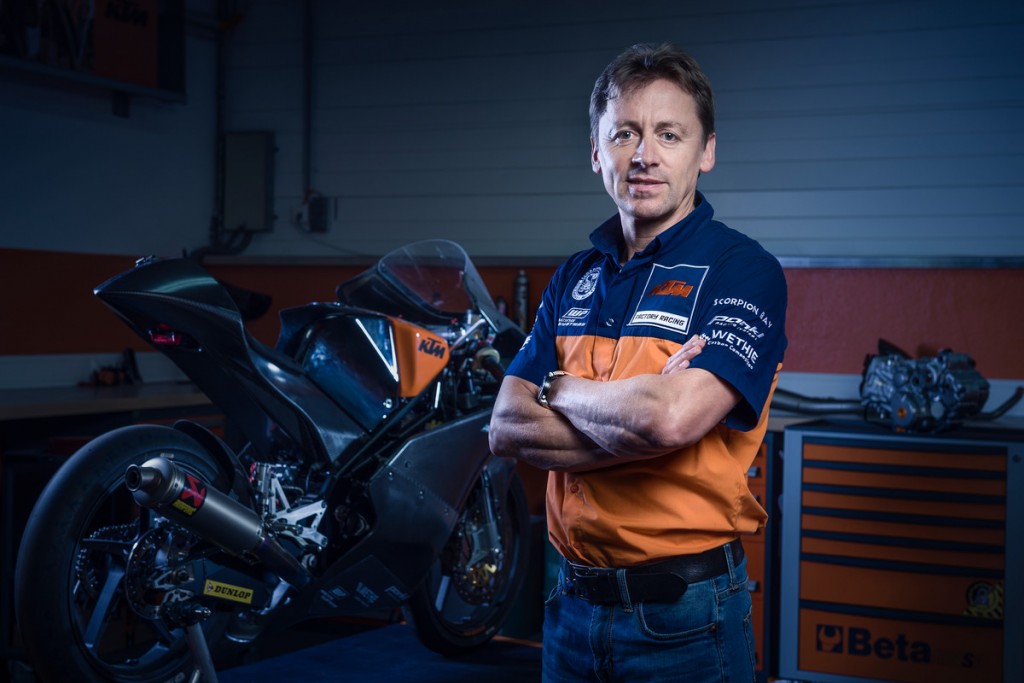 We’re sat down with Mike Leitner in one of the meeting rooms in KTM’s new spaceship-looking Motorsports building. Judging by the constant smile on his face, jovial demeanor and relentless enthusiasm for what is no doubt his toughest professional challenge, it seems that after spending almost 30 years in the MotoGP paddock only six months of retirement was required to recharge the batteries of the 53-year old. 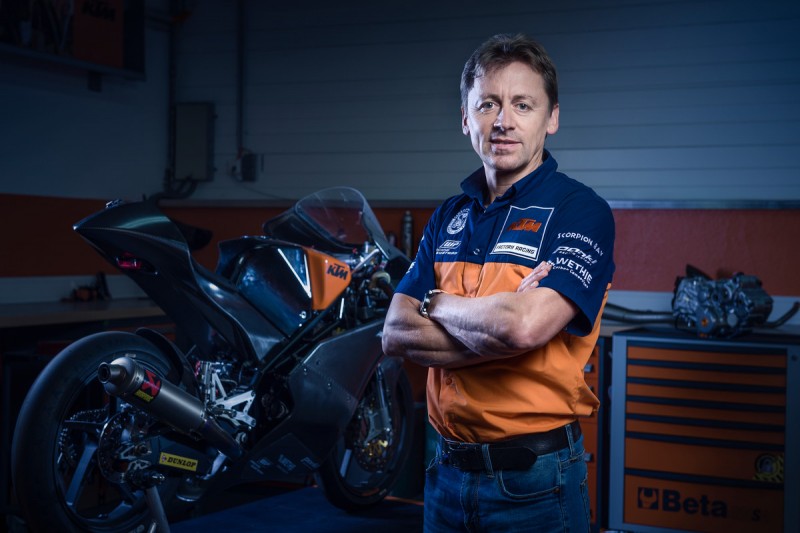 Leitner began life in the MotoGP paddock as a rider banging bars in the 125cc World Championship for three seasons (highlight being 10th in 1987) before switching to the spanners in 1992 and beginning a career as a chief mechanic and suspension technician for riders like Ralf Waldmann, Fonsi Nieto, Toni Elias, Garry McCoy and John Hopkins. Before he quit Repsol Honda at the end of the 2014 season, Mike had been chief mechanic for Dani Pedrosa for eleven years, helping him towards two 250cc World Championships and three vice World Championships in MotoGP.

Gardening clearly wasn’t enough of a challenge and Mike was then persuaded to return by the excitement surrounding the KTM RC16 project happening ‘practically on his doorstep’ by KTM Motorsports Director, Pit Beirer, and has been responsible for building the team as well contributing his vast experience into technical aspects.

What does your job title mean?
“You will have to ask Pit Beirer what this means! Only joking. It’s a good question as it could mean something else in a different company. Pit needed one guy to take responsibility with overlooking on all KTM road racing activities in the Grand Prix paddock; particularly MotoGP and Moto3. As I had so much experience and contacts, he felt I was the right person for this. So I am managing the personnel, finding new staff, coordinating things. Where I am needed, I try to help KTM on every aspect of this project – even on technical matters as this is my background. Sebastian Risse is the technical leader, but now there is someone else around him that can add some further experience as well. It’s about getting the best from the combined experience and knowledge available.” 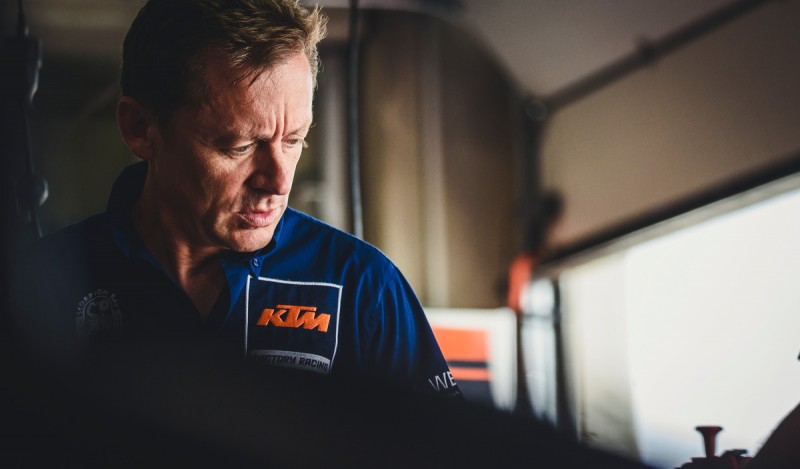 What made you interested to return with this project?
“I’m now over 50 and after many years of travelling over 200 days in a year, you get a little tired. I came out of the Grand Prix paddock after 25 years of MotoGP – I was out of the business – and was not really planning to jump into another adventure. After several months of being at home, Pit was always in the background calling me about this project that, to quote him, was so close it was practically in front of my house. I had mainly worked for Japanese manufacturers, so you become used to viewing racing from their way. When I took a closer look at the spirit, the style and the angle in which KTM approach things, it was completely different then I had been used to. In some moments you think ‘wow’ – maybe this is not the way to go. But in many other ways, I was also thinking this is not so stupid. Totally different. But experiencing this kind of woke me up. My interest increased and then that’s it – I had caught the bug again; checking my emails on a Saturday and thinking about how we should approach various challenges. And that was what happened – I got the hunger again to go racing and I was back. I started as a consultant close to the beginning of the project and by six months by position within the structure had grown.”

What makes KTM different then?
“To be fair, there are many enthusiastic people around Factory Racing. This is a good feeling and very addictive. I like being in the racing department where you can go with your cup of coffee and talk to someone from the rally department, and on the way back you pass the guys working on Jeffrey Herlings MX2 bike. There’s something so good about this racing quality so engrained within the company. Always READY TO RACE. When I left in 2014, my previous 11 years had been with working as chief mechanic to Dani Pedrosa at Honda. We won the 250cc championship twice and achieved many MotoGP victories. The Japanese take a super professional style to go racing and I learned so many things from this approach. I was living in this world with the best riders and best level of equipment. But completely different from that and a fresh motivation is that it’s also nice to start at zero on a project. You are having more of an involvement with the direction, but this is definitely not a one man show; you need a big amount of motivated people and I feel this at KTM. They want this. Sure, we shall suffer along the way – this is 100% clear – but this is nature of this category. We will not jump into MotoGP and simply destroy the opposition. You have to be patient. Be really calm and make the way. But I like the way of thinking here. When you talk to the responsible people within the company, like the board members, they understand very well the task but they are not any less motivated.” 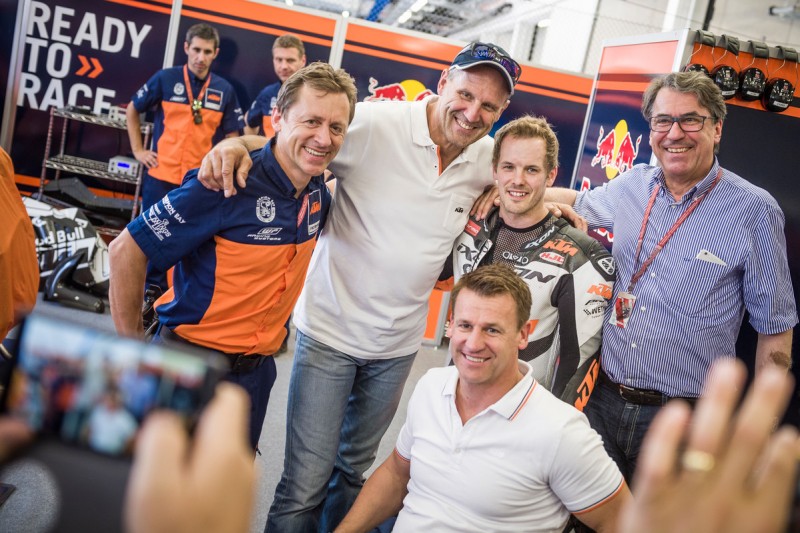 What have been the biggest problems of starting from nothing?
“The big headache is developing a bike as a group, but also to build a complete MotoGP team with all the infrastructure – trucks, pit garage, trailers, offices, oversea crates – from zero. At the same time, you have hundreds of interviews to collect the right people to bring them in the team, then teach them our way of approach and then do the job. This process is ongoing and takes a lot of time. At the end of the day, we will only be judged on the performance of the bike and the result. Nobody will ask us if our team is solid. Because from what everyone else sees this is all that counts, but having the right team of people makes this happen.”

KTM has fielded five test riders since the RC16 was first taken to the track, why so many?
“Yes, there has been a lot of test riders. If we had a bike that had been racing for a few seasons, having one or two test riders would make sense. Because your race riders will tell you which direction the bike needs to go and then the test riders will do the work in order to make it go that way. But for a long time we had nothing; no bike or input from a MotoGP rider. To get a proper MotoGP test rider on the pace as the regular riders is not so easy. Especially one that will come into such an early project. One big thing that has helped us is that the switch from Bridgestone to Michelin tires has changed the feeling of a MotoGP bike. So this approach to use many riders of different experience to get their feedback became clear quite quickly and was correct. Next year we will have two MotoGP racers in Bradley Smith and Pol Espargaró and one test rider in Mika Kallio.” 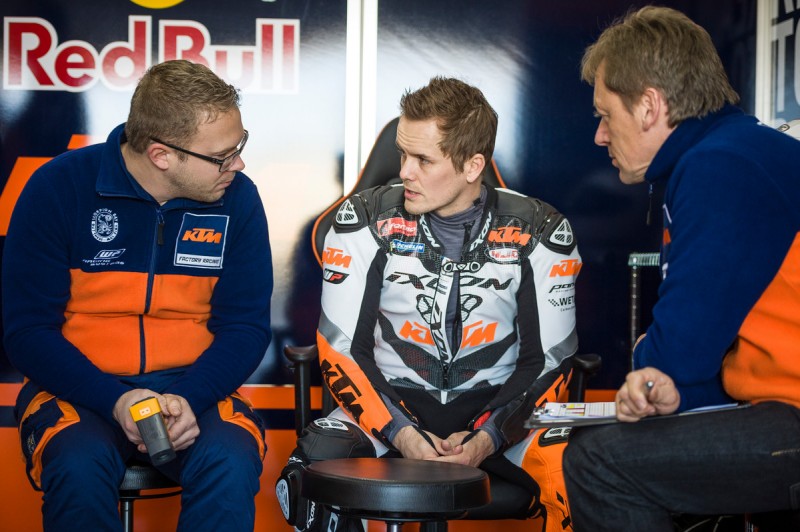 How much has the RC16 changed since the roll out in November 2015?
“It has changed of course, but up until the demonstration laps at the Austrian GP it was not a completely different bike from the one we started with. The original concept of frame and engine was not so bad. We saw in the Red Bull Ring test in July we were around two seconds from the very best bikes that have a lot of experience underneath them. It really is a development bike; a true prototype. We’ve stuck with this and tried and tested many things. From all that we learned with this bike, we made a decision on how to go to the next level with the new bike we tested first in Misano. Everything was new here, starting with the frame and the complete fairing, including the aerodynamics, right up to the ergonomics and the vehicle packaging. This ‘new’ bike will be what is raced in Valencia for the final round of 2016, then I hope we can make another step again in performance and be on the grid at Qatar at the start of 2017 with what will be the first KTM MotoGP race bike.”

What are your expectations for the first year of racing the RC16?
“This is so difficult. If you would have asked me this question a year ago when the bike only existed on paper, I would not have been able to tell you that one year later we would have a bike with an engine that can do more than four laps! But I see from this piece of paper we have something that has now been on the track many times, can achieve a certain lap time, stays together and the riders can ride the bike; so we have achieved something. But to be at a competitive level with the best MotoGP bikes and riders is another massive step. And this next step is as big again as going from a bike on a piece of paper to what we have now. This is clear. I have complete belief and faith in this project. I cannot tell you if this will happen in one, two or three years, but I think that at the end we have the correct people onboard to make it.” 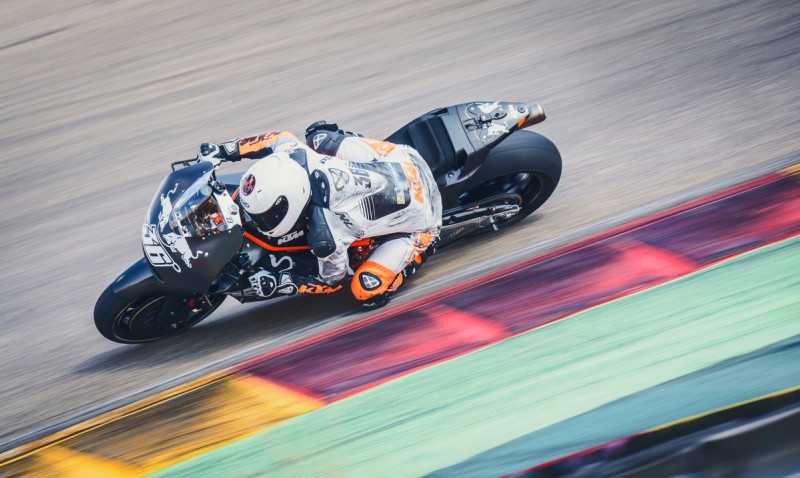 How do you think MotoGP will help KTM?
“Racing is the DNA of this company; for example, I am happy when we win in other disciplines like Supercross or Dakar. It’s good for the family – the company – when you live in that style it helps and motivates everyone. It was a missing link for a company like KTM – one of the big bike manufacturers – to not be in MotoGP. So now we are almost here and we shall see how successful we can be.”

74 Responses to Interview of the Month #2: Mike Leitner – Leitspeed