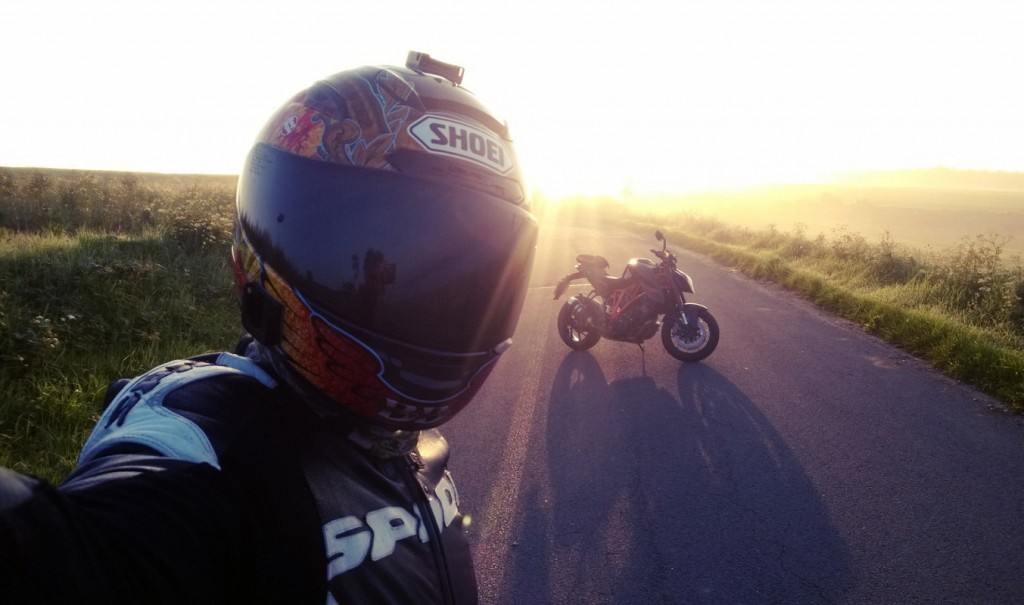 After a summer with a lot of miles, fuel, tears, laughter, burn-outs, bum-outs and fighting (not really) the 1290 SUPER DUKE R challenge has come to an end.

Our four semi-finalists battled hard through challenges both serious and ridiculous for arguably the greatest prize in the history of motorcycle competitions – a KTM 1290 SUPER DUKE R. For free!

After the five challenges and five bonus tasks, voting via KTM’s Official Facebook Fan Page awarded the UK’s Baron von Grumble (obviously not his real name, but a faceless blogger with a penchant for foul language but in an entertaining way) with the victory.

Baron scooped the 1290 with 60 points, followed by Australia’s Jay Marriott on 52 points. Italy’s Matteo was third with 38 points and Germany’s David Schönhoff rounding out the top four with 30 points. 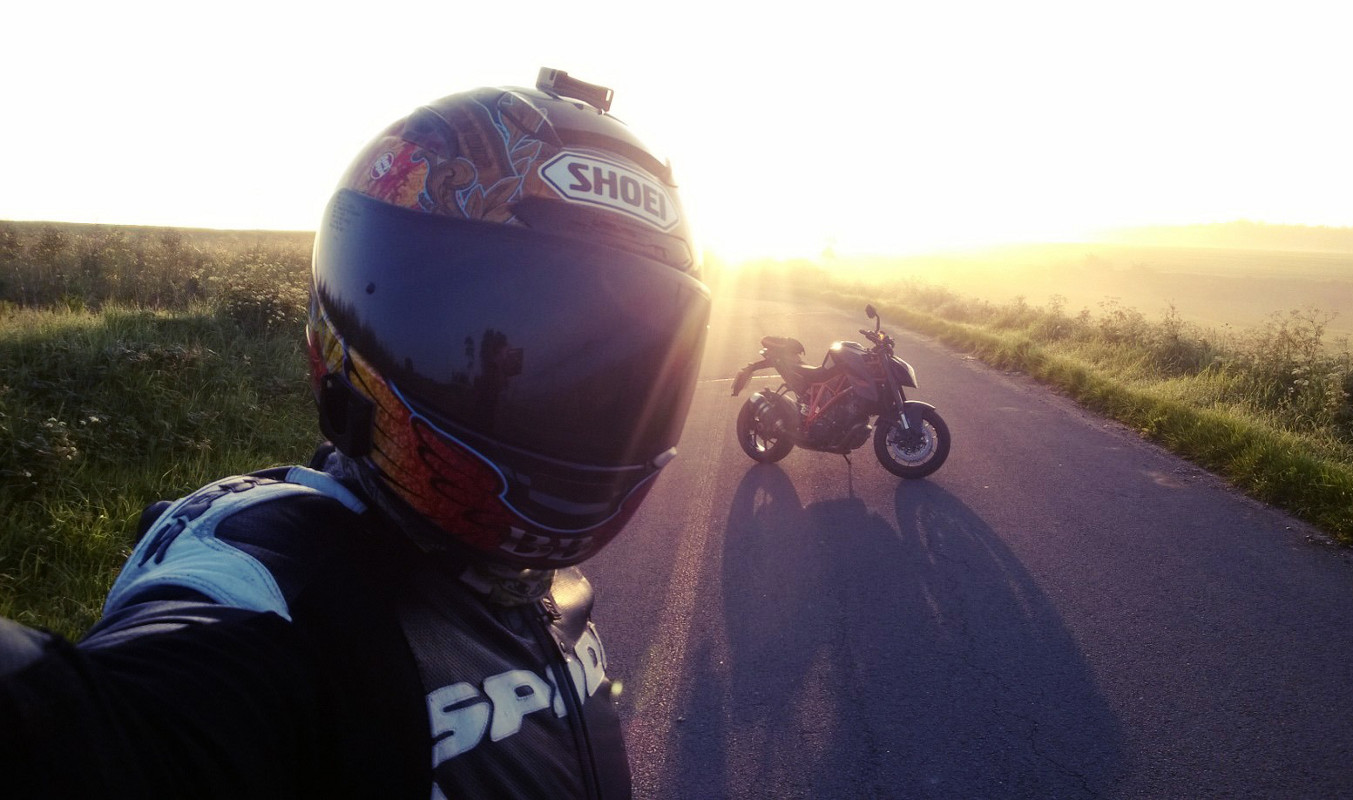 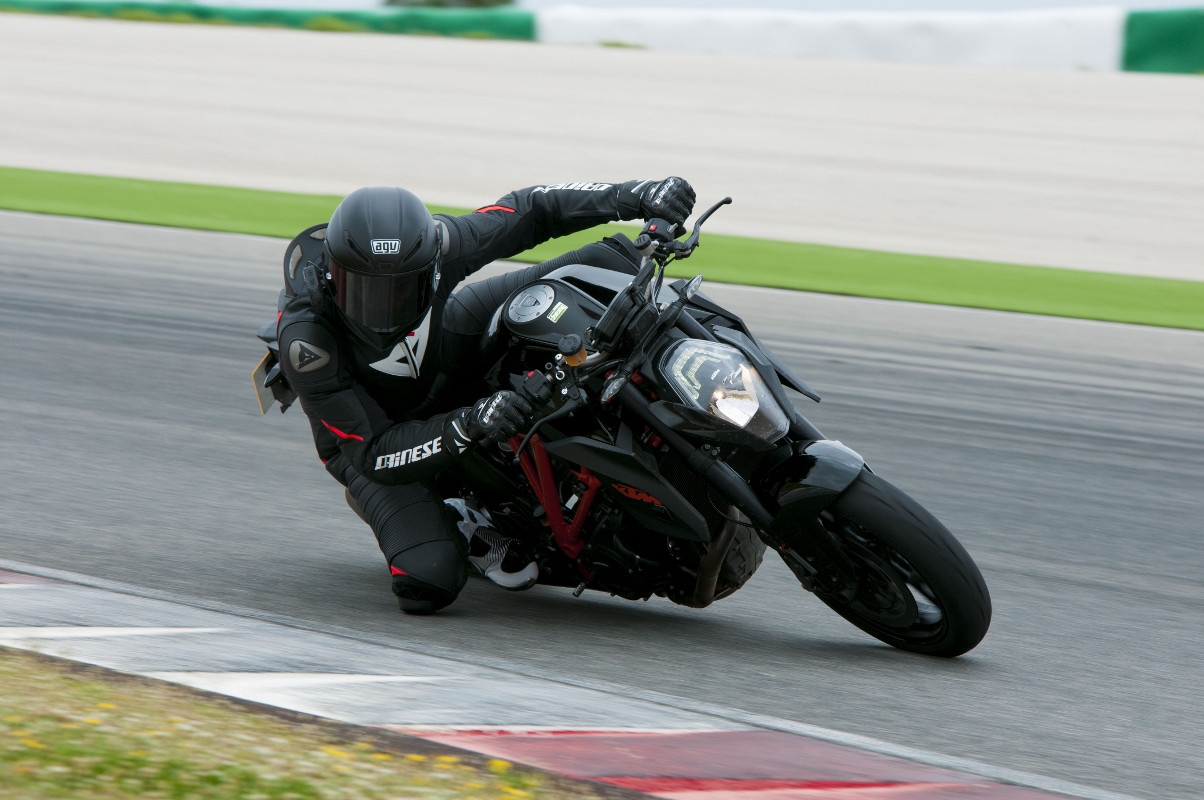 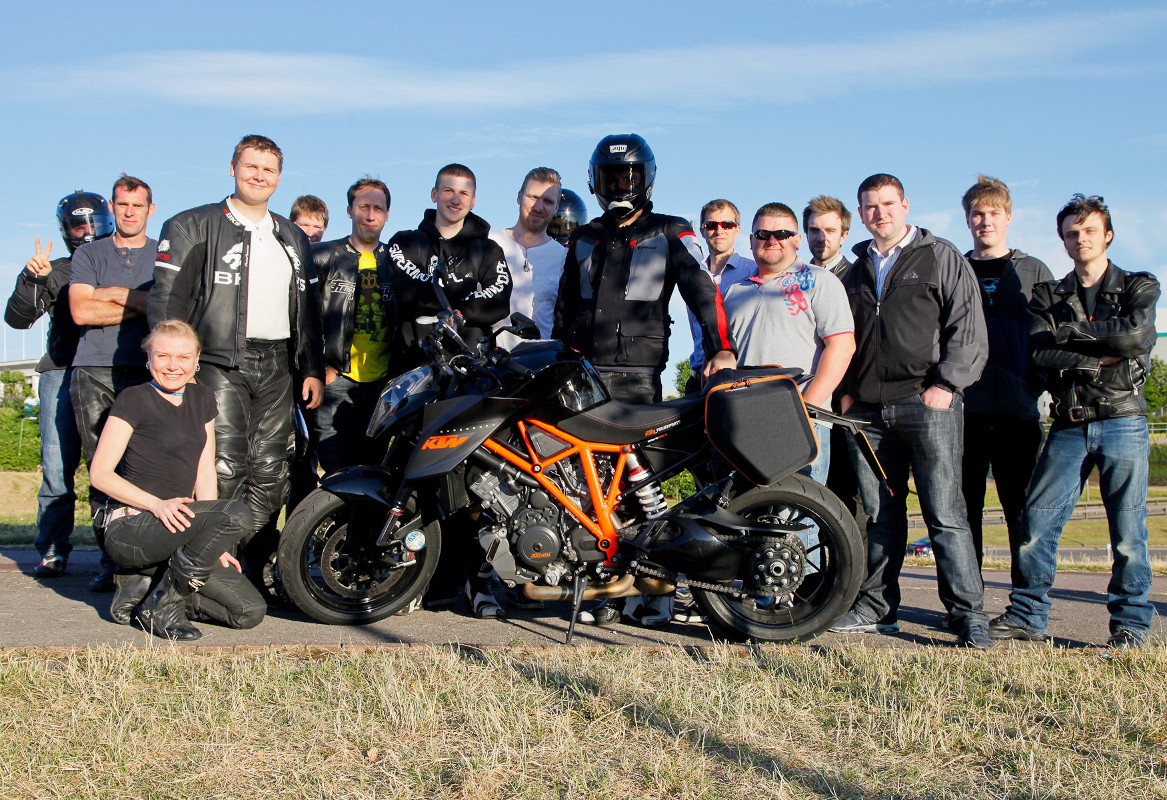 On being told he will now get to keep the 1290 SUPER DUKE R he has spent most of the year riding, Baron von Grumble said:

“What can I say? I’m super excited to be the proud owner of a bike that I’ve become very attached to over the summer. I’ve never considered owning anything other than sports bikes in the past but the 1290 has opened up my eyes to a whole new world of two wheeled toys. But enough of the promo banter…

There will be a series of videos to come which explain how it its going to go down – so keep an eye on the KTM fan page for further details.

Yes, clearly there has to be only one winner but we applaud our four competitors for their efforts, creativity and fun over completing the challenges and tasks, which were as follows:

CHALLENGE 1: “The Date”
A photo showing the competitor and their bike on a first date.

CHALLENGE 2: “The Bikewash”
Photo showing how the competitor washes or has their bike washed.

CHALLENGE 3: “The Costume”
Photo showing how the competitor rides their KTM 1290 SUPER DUKE R dressed up in a costume of their choice

CHALLENGE 4: “The Spot”
Photo of the 1290 SD R parked at a spot, which will be mind-blowing to the Facebook community.

CHALLENGE 5: “The Burnout”
Simple as that; the competitors gave us their coolest burnout photo.

TASK 1: “The Speedo”
Send in a picture after riding 1290km in the fastest time.

TASK 2: “The Community”
Take a picture of you and your bike including the biggest group of people you can find.

TASK 3: “The Fuel”
Take a picture of the speedo showing the lowest fuel consumption after a min trip of 160km.

Task 4: “The Trip”
Take a picture of your bike at a place that is as far away as possible from your home.

Task 5: “The Stranger”
Take as much pictures as possible of other people sitting on your bike. 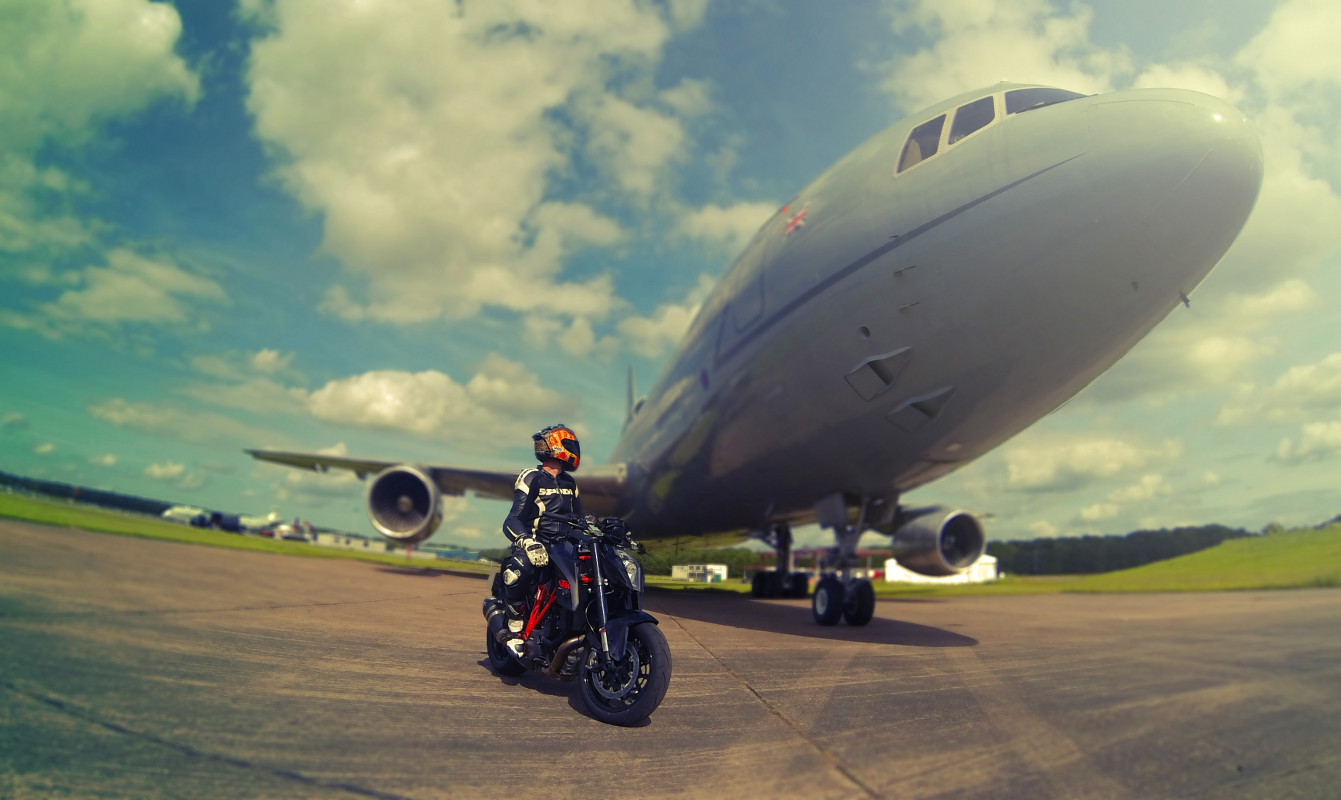 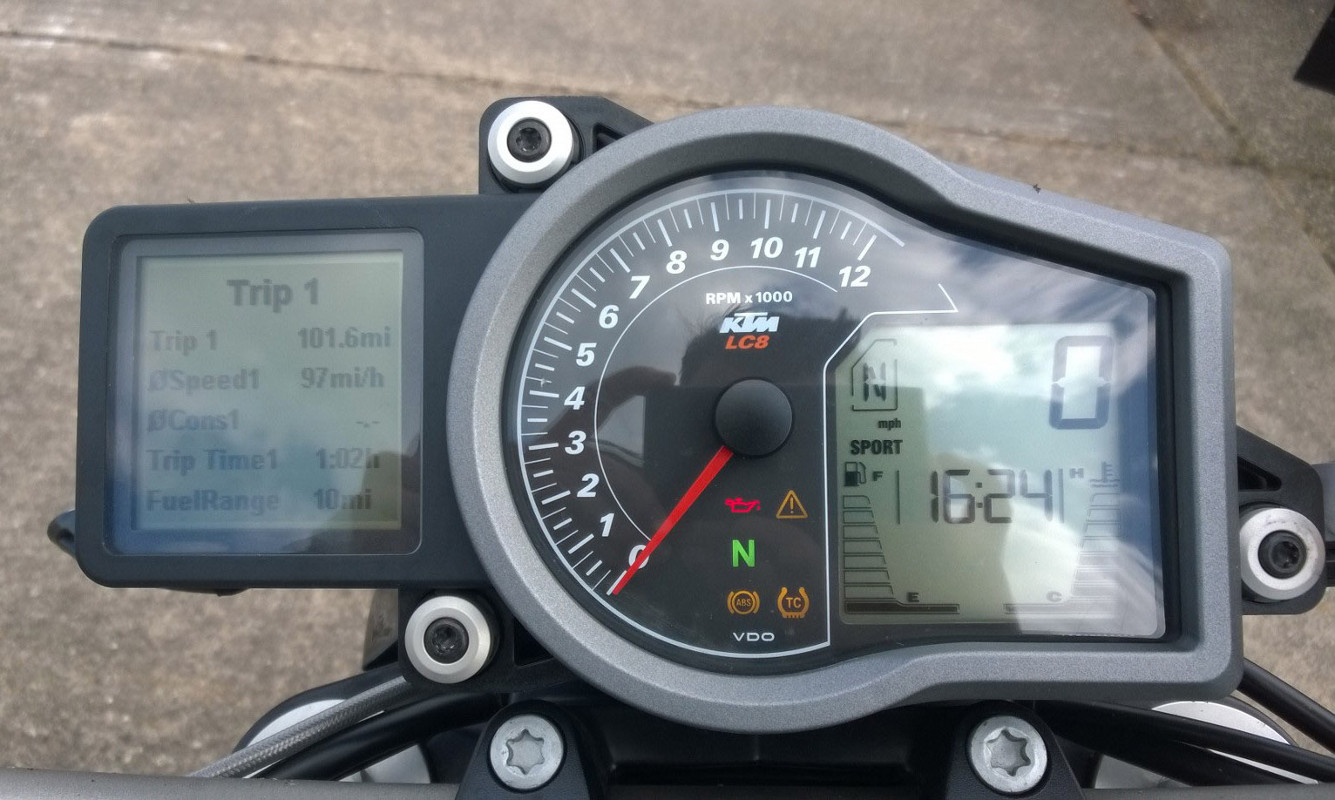 Not all plain sailing…

Baron and the good folk at KTM UK (namely Luke) did get confused with the third bonus task, “The Fuel”. They interpreted that as seeing how low they could get the fuel economy down, thinking that KTM is a company that likes to see single figure mpg figures. They were wrong. Very wrong.

After hiring Bruntingthorpe Proving Ground’s two mile airstrip and surrounding handling track, Baron spent two hours trying to get the fuel figure down to its lowest possible reading with lots of flat-out runs. Unfortunately this would transpire to be a spectacular failure and he bombed out of the bonus task using more fuel than a Boeing 747 on take-off.

JAY MARRIOTT
Australia’s candidate seemed to get naked at every opportunity. And because of this voters of the challenges regularly got to see the KTM logo Jay got tattooed on his bum. After he promised us in his application that he would do so if he got into the final four. In his words, he explains the reason for his ass art … 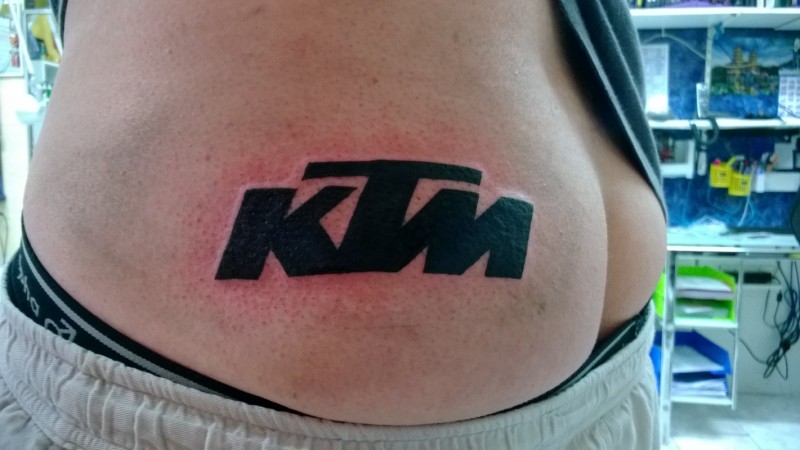 “I have been a Ya**ha man for a long time, but a few years ago moved to KTM offroad bikes and have breathed and bled Orange ever since. I recently upgraded from my long-suffering 520 EXC to a 2013 450 XC-F and for commuting purchased a 690 DUKE.

I have kept a Ya**ha R1 for fun and trackdays and such, but ever since I first heard about the 1290 I have been dreaming about it and planning to make “The Beast” mine. I have devoured every piece of information about it as it has been released and avidly informed my friends and family and my Facebook community.

If it helps in any way, shape or form (for the competition application), I would be willing to tattoo myself with the KTM logo, or anything about the Beast, and ride the thing clear around Australia, hell, around the world, drumming up as much publicity as possible for my beloved Orange brand.

In short, simply owning a 1290 SUPER DUKE R will be a dream come true for me, and I will beg, borrow or sell everything I own to realise that, but if I have the opportunity to ride “The Beast” all summer long, and possibly win one, I will endeavor to be the best ambassador for the Orange brand Down Under possible.

Thank you very much for this opportunity! Jay.”

DAVID SCHÖNHOFF
Challenge 2 was “The Bikewash” and this really gave our competitors chance to be creative when it came to adding water to “The Beast”. They didn’t disappoint. 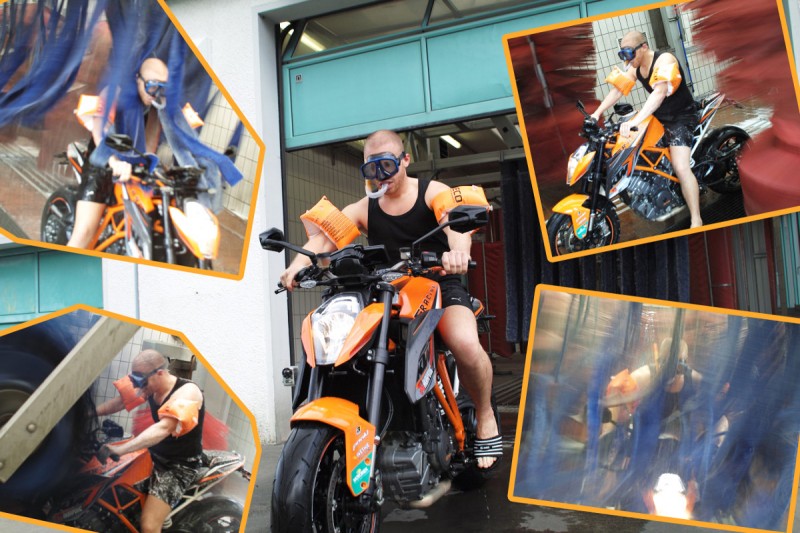 Although eventual competition winner, Baron von Grumble, provided some spectacular photos and videos of riding through water (doesn’t that just make a bike ever more dirty?) it was Germany’s David Schönhoff who went to astounding lengths by putting on his snorkel and orange armbands to ride through an actual car wash. We don’t recommend this at all, but it looked great and the bike came out nice and clean. As did David!

MATTEO BONAMICI
Italy challenge contestant and his PowerPart ‘race’ specification 1290 SUPER DUKE R got off to a flying start as Matteo was able to sample the unrivalled excitement of a KTM TNT (Track ‘n’ Test) event at Mugello. 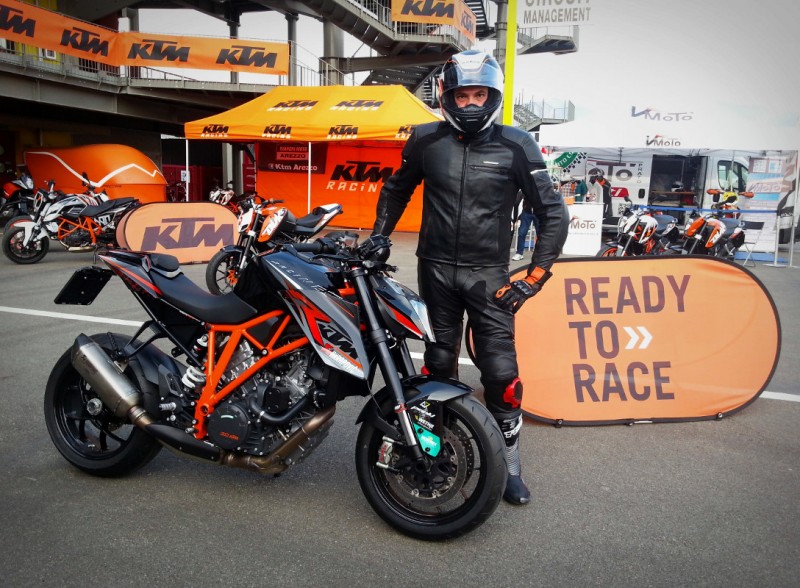 TNT days are open to all brands of bikes and are a completely different approach to track days. They allow the opportunity to sample the latest KTM model range on some of the world’s best race tracks and there’s also a race at the end of the day. Yes, an actual race you can take part in! Find out more at www.raceorange.com.