The covers are off the MXGP title-winning factory bike. Here’s the low-down on the changes. 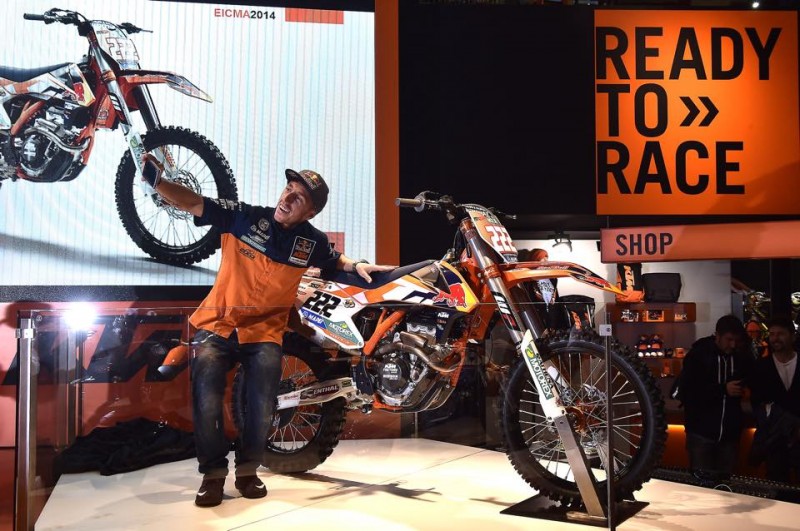 It is about time that one of the most important dirt bikes in the world was given hearty fanfare. For five years in a row KTM’s 350 SX-F has been an FIM World Championship winner in the hands of Red Bull KTM’s Tony Cairoli and has rightly been offered as the ideal solution between those wanting the agility of a 250 and the power of a 450. In Cairoli’s hands the 350 has proven its mettle when it comes to racing on all types of terrain, to taking holeshots and for reliability; indeed the only recorded DNF due to a mechanical problem for the Sicilian was in the second moto of the 2013 British Grand Prix … and that was only after ‘222’ had given the motorcycle copious abuse in celebration of his fifth consecutive world crown after the first race.

There is little doubt that the 350 suited a slight but strong racing pro like Cairoli from its introduction as a brainchild of former racers Stefan Everts and Pit Beirer in 2010 but it was also the tool with which Belgian athlete Kevin Strijbos toasted podium finishes and claimed a British Championship in 2012 and thus resurrected his career in the process.

Cairoli has adopted minimal changes to his race bike in the last four seasons. It is even alleged that he used the same basic prototype chassis since that inaugural version in 2010, finding the first model the most effective for the range of conditions and challenges for the eighteen round FIM MXGP series. For 2015 and this startling factory bike however KTM have re-shaped and re-sharpened the animal and one of their most impactful and influential machines now has a new form. 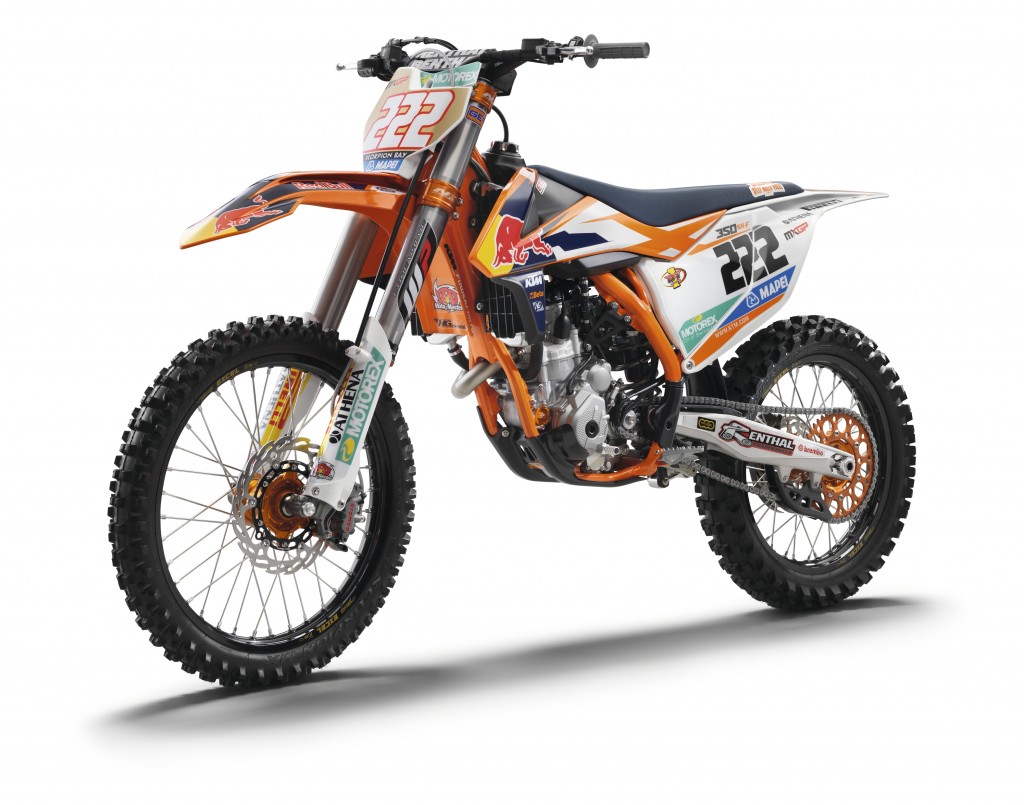 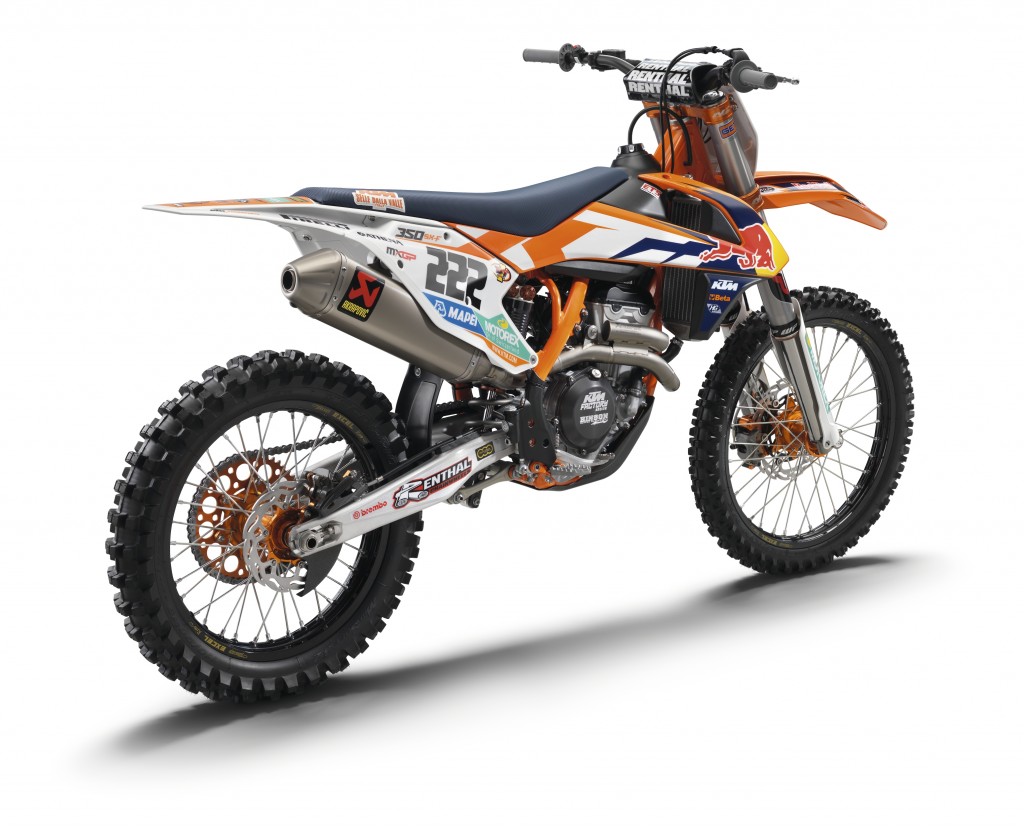 So, what’s the standout? What really captured the eye when Cairoli whipped off the covers at the 2014 EICMA show in Milan this week?

The sculptors at Mattighofen have been busy. A lighter stainless steel frame with a new sub-frame, a newly designed cast aluminium swing-arm with re-designed linkage and new ergonomically refined bodywork: ‘new’ is the word. The weight saving is said to be around a hefty five kilos which is going to have obvious repercussions on rideability.

“The weight saving is said to be around a hefty five kilos which is going to have obvious repercussions on rideability.”

KTM’s mantra with the KTM 350 SX-F FACTORY is: ‘Reduced weight, increased functionality and better ergonomics’ and one of the ways in which they have aimed for this is through a slimmer, more compact powerplant for better centralisation. The engine itself – Cairoli’s works 350 was even subjected to an FIM inspection at the Spanish GP this year after rival teams had doubts on the spec in relation to the power and performance achieved, needless to say it was verified as a 350 – has apparently been given a boost. KTM are vague on the details and will only state: ‘The DOHC engine communicates with the state-of-the-art Keihin engine management, but everything else is a company secret. For us it is all about the World Championship!’

Agostini’s MV, Sheene’s RG, Bayle’s CR, Rainey’s YZR, Doohan’s NSR, Rossi’s M1, Smets 500 SX, Everts’ YZ … motorcycle racing has numerous iconic models associated with some of the legends of the sport and various disciplines. Maybe it is too soon to really embrace and appreciate the 350 and Cairoli link, but there is little doubt that the combination has made a ‘crater’ in the 58 year record book of the FIM Motocross World Championship. 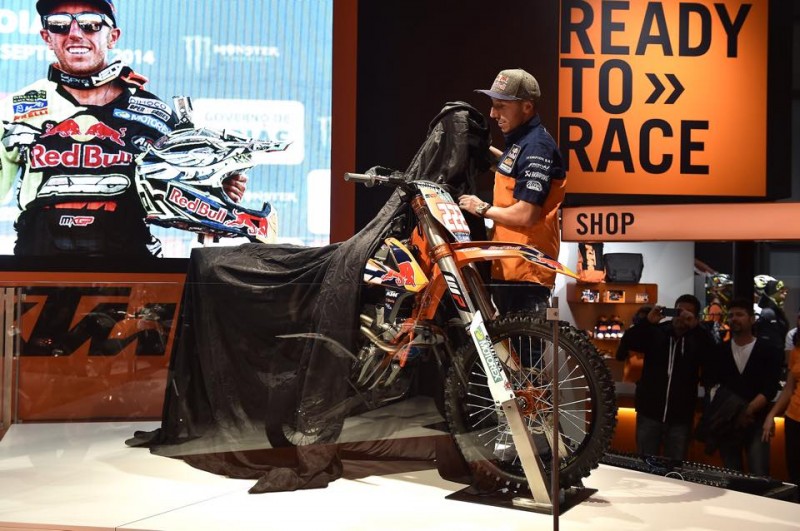