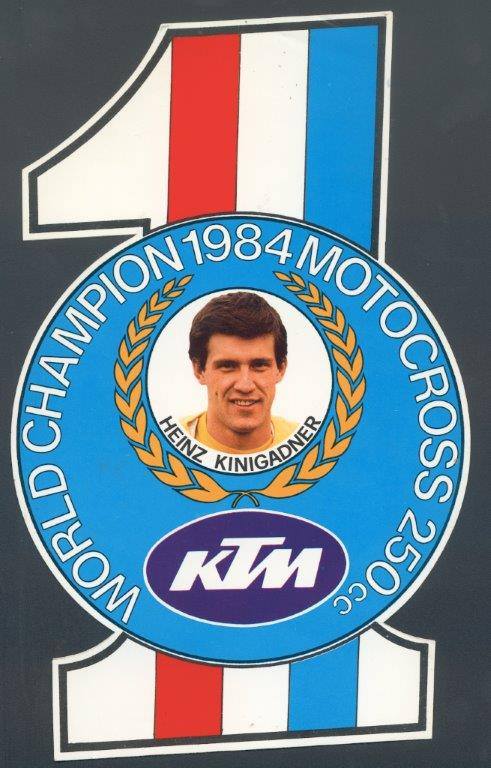 If somebody asks for popular Austrian motorsport heroes, there are two names that immediately spring to the people´s mind: Niki Lauda and “Kini”. Both celebrated a World Champion in 1984, one in Formula 1 and the other on a not yet orange KTM Motocross bike. Reason enough to recall Kini´s exciting season!

While the Vienna-born Niki Lauda won his third and last Formula 1 World Championship with a mere half point advantage over his French teammate Alain Prost at the race in Estoril, Heinz Kinigadner, the towering Tyrollean, secured his first Motocross title in the Finnish twon Hyvinkäa on a 250cc KTM. Looking back, that title was one of the most important for KTM, since it was the 50th anniversary year and the championship had been won by an Austrian with an Austrian bike – an enormous contribution to popularity beyond question. 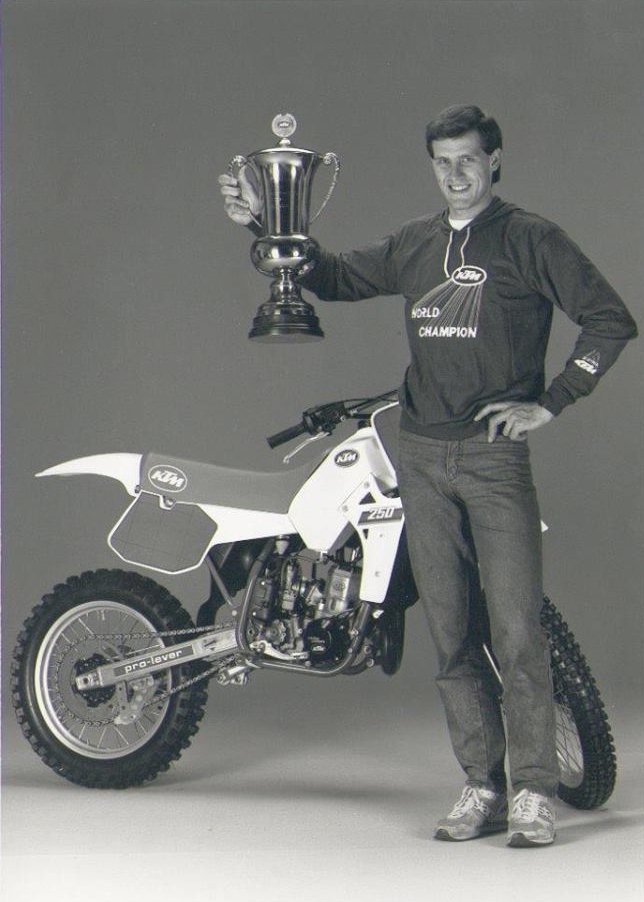 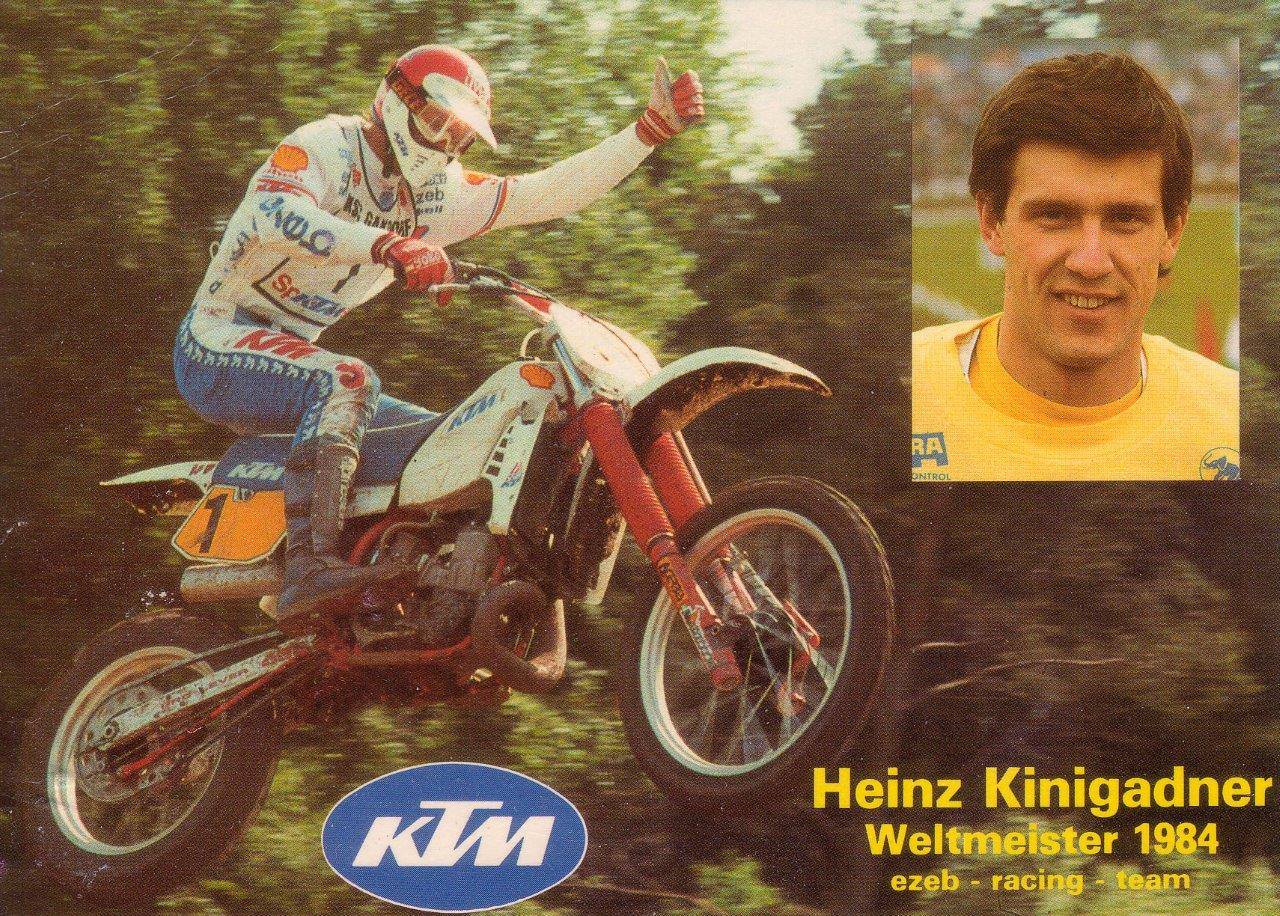 The season of the 250cc Motocross Championship was almost as exciting as Lauda´s four wheel season. Although Heinz Kinigander gained a small points lead in the first races, Jacky Vimond, the “Pink Panther” from France, happened to have the title in his sights and gained ground on Kinigadner in the second half of the season. At the penultimate Motocross GP in Rothenthurm, Switzerland, Vimond scored full points, while the Austrian came off badly. At the final round in Finland, however, Kinigadner enjoyed the rub of the green. A fifth place would be enough to win the title, even though Vimond would win both motos. 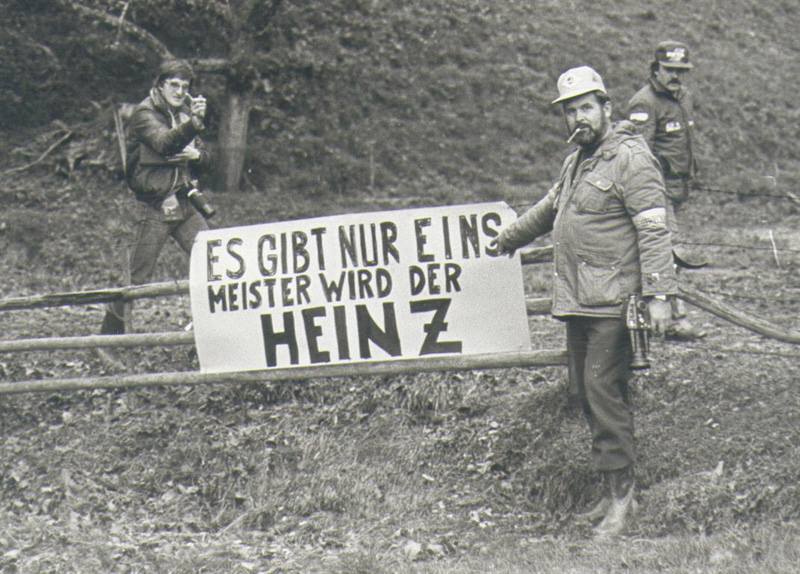 On the 19th August came the moment of truth. Already in the first of two motos, Kinigadner left nothing untried on the sandy track and held Vimond at a distance. A third place, one position better than the French, was enough for Kinigadner to secure his first Motocross title. Overall, it was the fourth world championship for KTM in the 250cc class, after the Russian Gennady Moiseev had won three titles in the 70s. 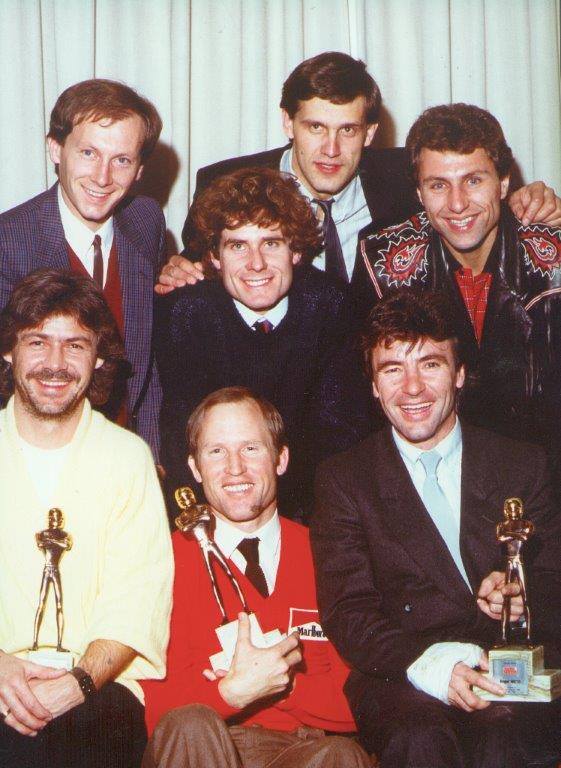 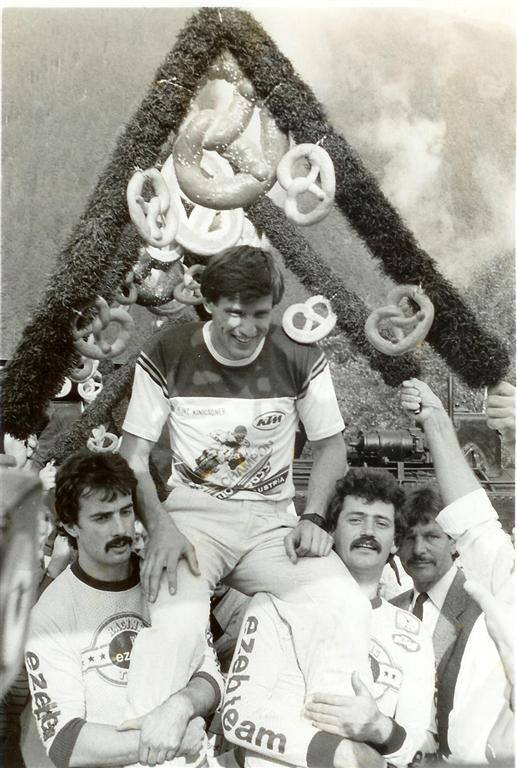 Kini´s impressive career began in the late 70s. Back then, the 19 year old from Zillertal, a trained baker and confectioner, became Austrian double national champion in the 125cc and 250cc class and runner-up on a 500cc bike. After additional national championships in the 125cc, 250cc and 500cc class, he gained first world championship points in 1980. Only one year later, Kini contested his first entire season, which he concluded in fifth position. In 1982, at the GP of Italy, he stepped up to the top of the podium for the first time. 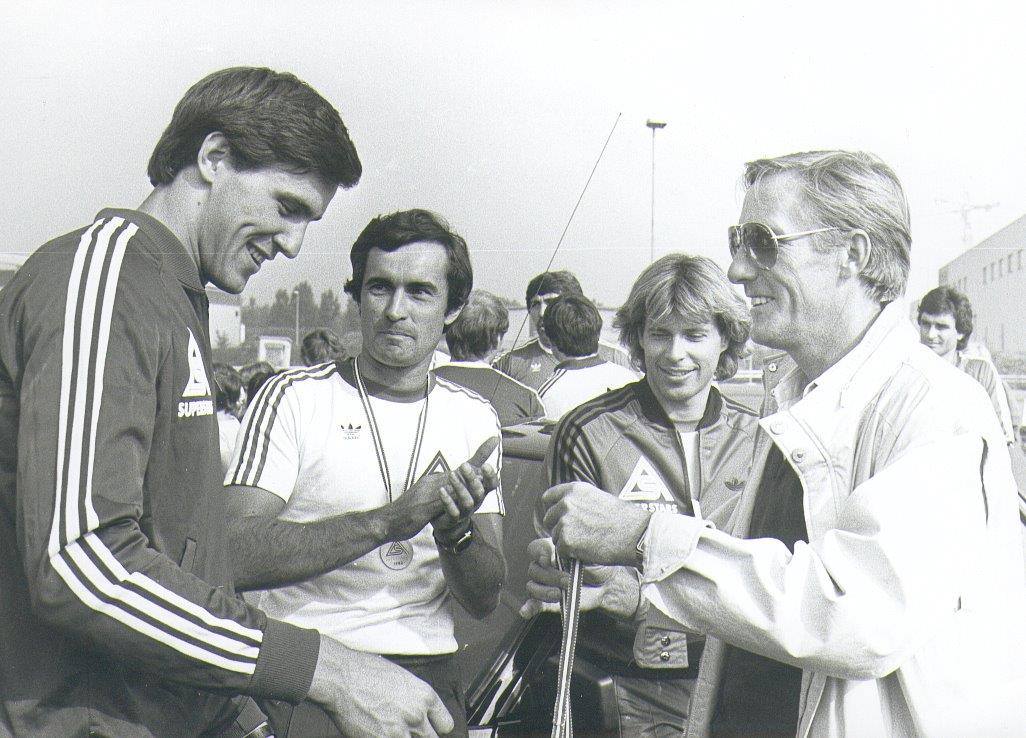 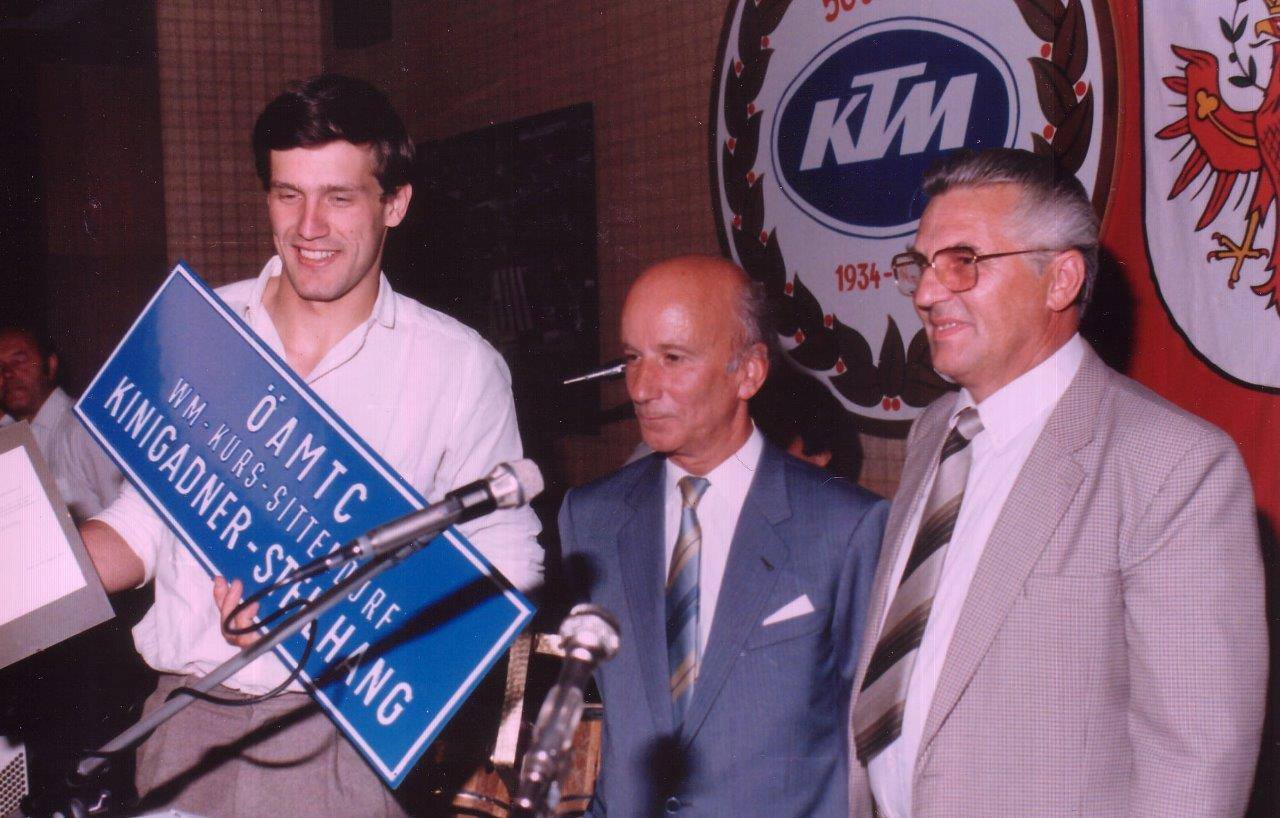 Although KTM´s last Motocross world championship already dated back a couple of years, the at that time still vey small Austrian brand wasn´t daunted by the superiority of the Japanese brands and had always remained near the mark with its 250cc factory bike. Three third places in the 250cc world championship in 1981, 1982 and 1983, won by the Dutchman Kees van der Ven, had been a strong signal. 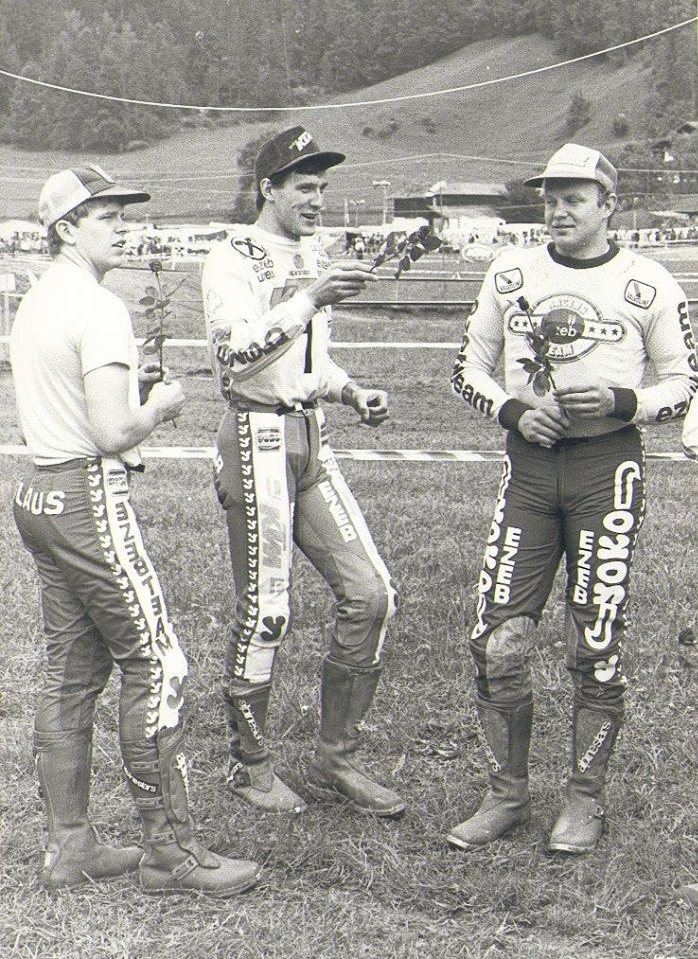 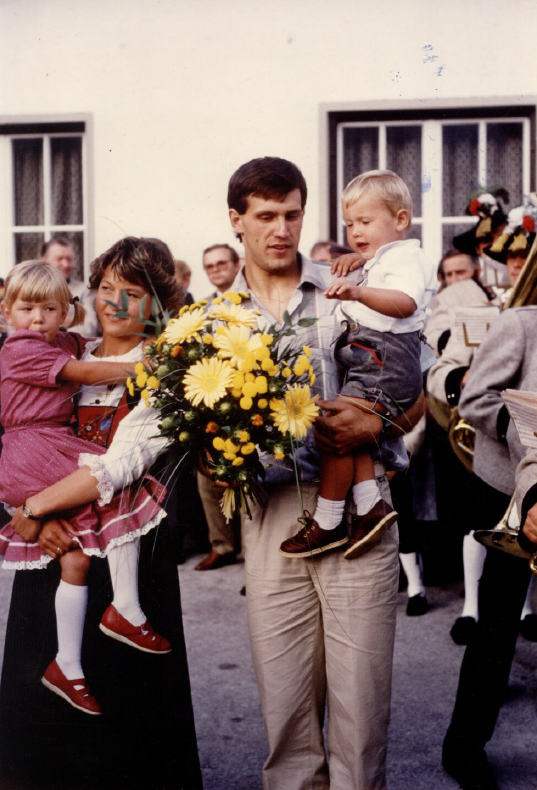 Kinigander, who commends himself as a top rider after winning the GP in Italy, was signed for 1983. But his KTM debut year was ill-fated, since he was impeded by injuries and he, therefore, started the 1984 season with cautious optimism. His stated aim was a position among the top five riders of the 250cc class. But after the first GP in France there had already been a victory to his credit and Kinigadner arrived at the race in Schwanenstadt, Austria, as championship leader and quickly advanced to the position of public´s darling and title favourite. At season half, Kini was almost up and away and left hardly any chance to his competitors, neither when Vimond gained momentum in the second half of the season. 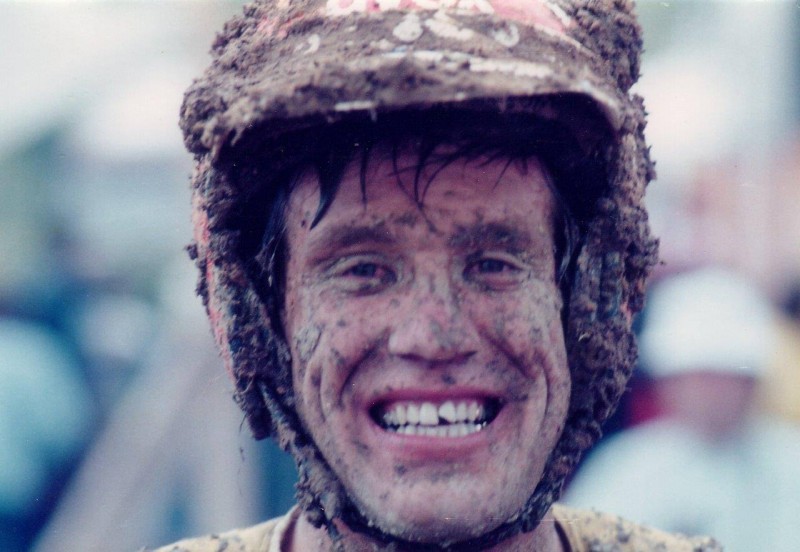 Kinigadner managed to defend his title in 1985 before he changed his field of activity and moved to desert rallies. Even there he achieved spectacular successes and had a large share in the development of the successful KTM Rally bikes, whose success story is continued to the present day.

Heinz Kinigadner was a stroke of luck for KTM. Even 30 years after winning the title, he still enjoys great popularity. Down to the present day he is working as KTM motorsport consultant with his own sportswear brand. Together with Red Bull owner Dietrich Mateschitz, he established the “Wings for Life” foundation after his son Hannes was seriously injured in a tragic accident. The foundation is constantly promoting the quest to find a cure for spinal injuries.