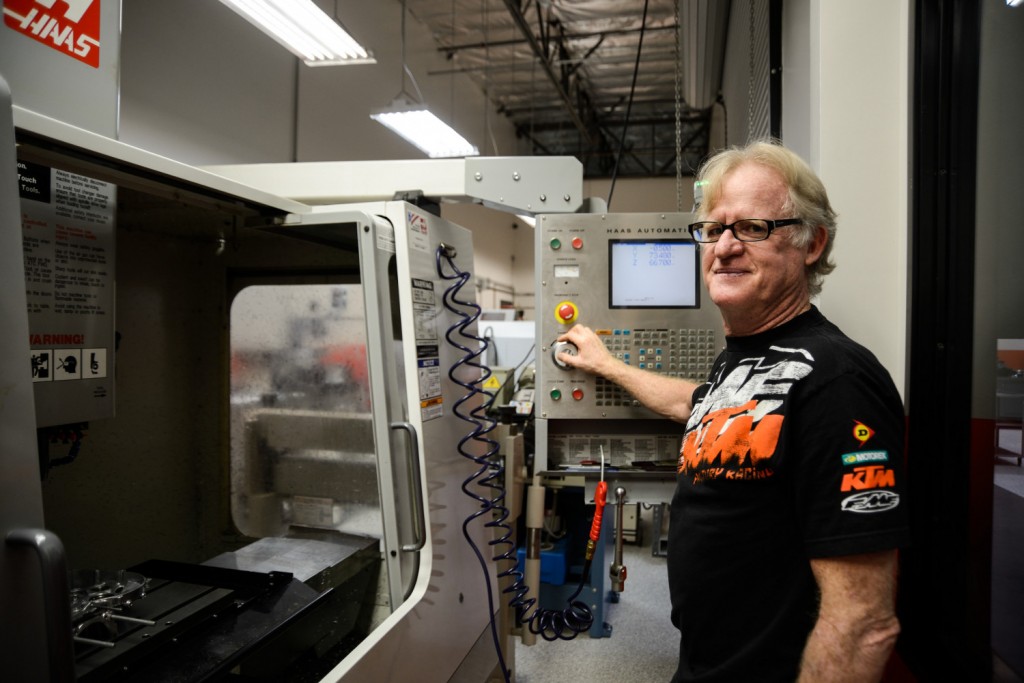 We catch up with engine guru Dudley Cramond in the USA to find out exactly what KTM Factory Services is responsible for, and how he came to be the head of the department!

Dudley Cramond began his racing career at the age of 15 in South Africa as a street rider, but is now the central point to the US Factory Services, which supply engines to all of the factory supported Motocross and offroad teams racing in America. He’s one of the most experienced guys in the business and is responsible for all factory motors in the US! 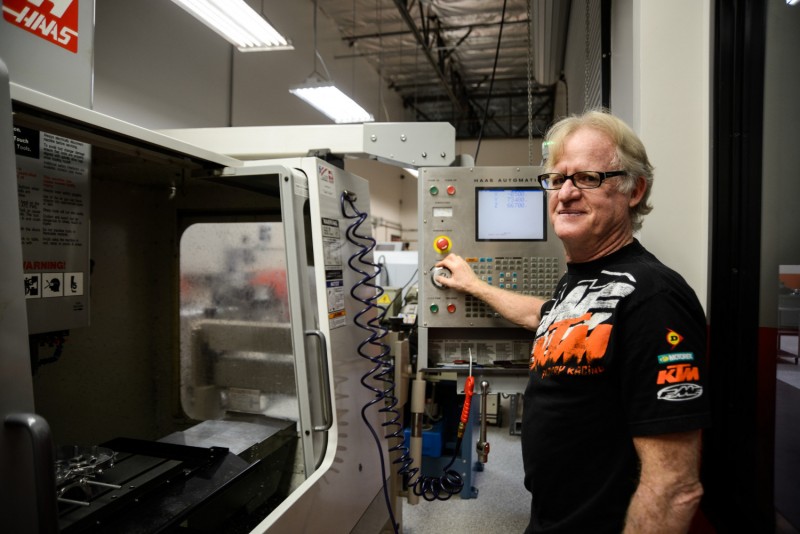 With a career that’s spanned numerous decades, Dudley has enjoyed a journey that’s seen his schoolboy passion turn into a long and varied career, after being South African road race champion when he was just 19 years old. Following a works rider that ended with injury, Dudley raced in the UK, finished fourth in the 250 series and tried his hand racing world famous road race circuits such as the Ulster Grand Prix and North West 200, although he crashed out of practice in the IOM TT and never got to race the legendary circuit.

“In a nutshell I decided to stop racing and I joined Harris performance in the UK on their Grand Prix team for a few years with the likes of Jeremy McWilliams. One of his sponsors got me involved with Queens University in Belfast, and I spent a few years working on the GP circuit with them, then we had an American sponsor, so I got transferred from Belfast to America. I worked for that company for five years, before I was approached by Grant Langston’s father to come and work for KTM to build his 125 race motors in Motocross. That was around ten years ago, I worked for KTM for three years, I left and went to work with James Stewart and Chad Reed, I was there for five years, and then I came back to KTM.”

Jon-Erik Burleson, KTM North America president, had a vision. He wanted to start a factory services program to ensure every KTM supported team had the right tools for the job to win championships and promote the products in a positive way. Jon-Erik wanted to supply good and reliable equipment for these teams, so every team that had a KTM agreement began to have supplied motors for practice and racing – the teams don’t touch the engines at all, but have the faith that they are receiving the best technology available to them, and most importantly the motors will be consistently reliable.

“We supply all the motor work for our teams. We do a contract with them and they have supplied motors for practice and racing, so they don’t touch the engines at all. All of them are full factory engines for our support teams such as BTO and Troy Lee. We have one guy that’s in charge of the offroad side too, and everything goes through factory services.”

“There’s nine of us including myself, and each guy is responsible for each race team. But we all overlap, so if one section is really busy then we all help each other. They liaise with the teams they look after, but they are available to work with each other. We have a spec and a couple of variances for rider preference, but there’s not a huge choice with the factory engine. If there’s a request then we try to accommodate it, as best we can. To be honest everybody is happy with the package we supply.“ 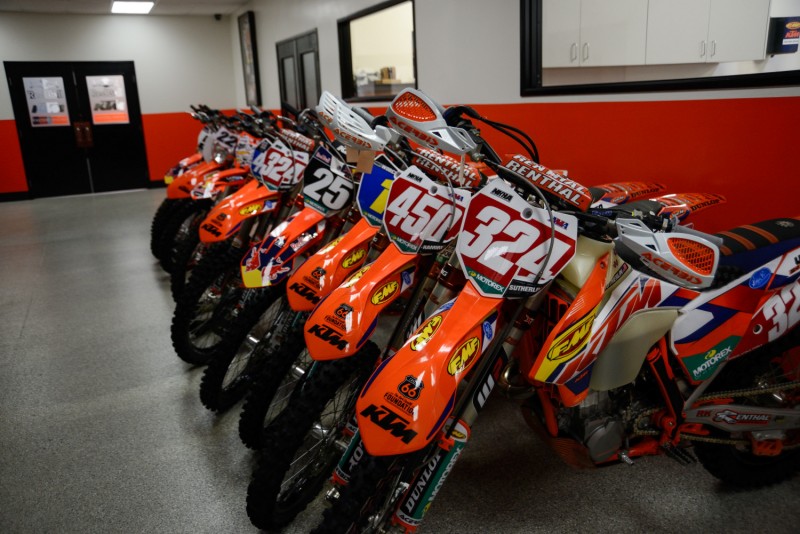 For a KTM 250 SX-F engine the turnaround is roughly two and a half days. The engine comes into the factory services base, which is within the KTM USA headquarters facility in Murrieta, California, where it is completely stripped, cleaned and inspected. Once it’s back together it’s put on the dyno, which checks the engine is exactly where it should be performance-wise before it goes back to the team. Dudley explains how it works.

“We have a service schedule for all our engines; practice engines are around 20 hours before a service, whereas a race engine depends on the condition of each race. Obviously for muddy races or deep sand it’s different from a hardpack race. In the majority it’s hard to say how many engines we have in at any one time, but we have around 230 engines in circulation on our list in total.”

“Everyone is very busy, and generally speaking the guys are busy every day. We’re very busy at the beginning of the season, and when we have a new product like this year with the new Factory Edition bikes it ramps things up a bit. We work closely with the Red Bull KTM Factory Racing Team with Roger De Coster to ensure we are providing the latest information they have. All feedback and everything we find or come across that we think will help, or that’s come from testing, we pass across to them too.” 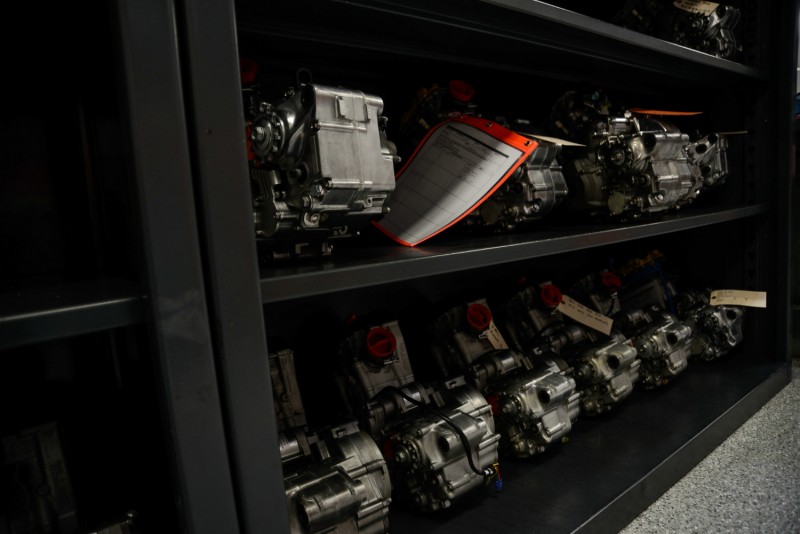 Dudley spends most of his time in the machine shop with specialist expensive equipment that nobody else can really use. He repairs things that are broken, creates special tools and works on improving anything that can be improved. He’s quite a hand at repairing cylinder heads, machining valve seats, making fixtures and jigs to make jobs easier, as well as programming the state-of-the-art equipment to ensure continuity between engines, whilst also managing his team.

The factory services program ensures the reliability of bikes representing the brand in a factory light, and it’s very strict so nobody can alter the engines. So far the program has worked well, and Dudley enjoys the success his dedicated team brings.

“The biggest satisfaction is success, and to see a good and happy environment with happy workers. Generally the more people you have the more headaches you have, but my headaches are small. The main thing for me is making sure the team is happy, in as stressless environment as possible and that they have what they need to do their job. This generally means we can achieve the goal of getting on the podium at the weekend,“ concluded Dudley.