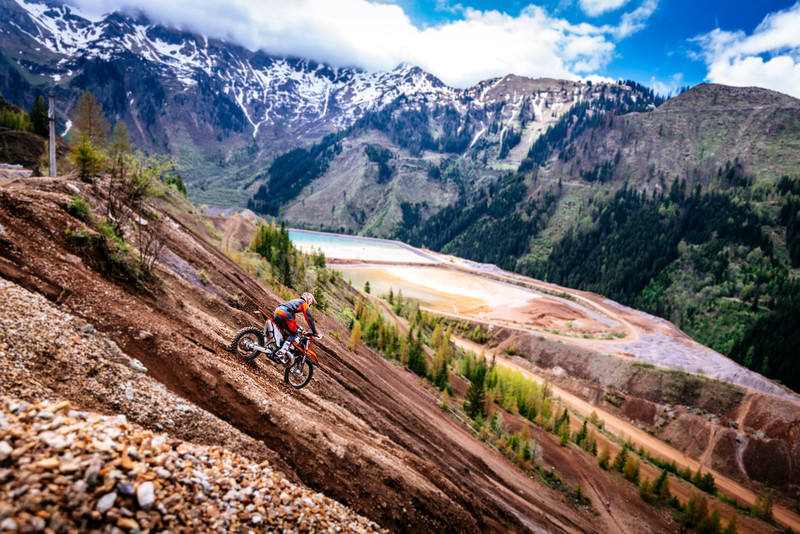 KTM’s 2018 TPI 2-stroke Enduro machines are a monumental step for motorcycling history. The Erzberg quarry, home to the famous Hard Enduro, is one of the toughest offroad events on the planet. Bring those two things together and you have one epic press launch …

Nothing quite prepares you for the site of the famous Iron Giant. The spectacular Erzberg quarry on the egde of the small town of Eisenerz in Styria, central Austria is an incredible spectacle. An astonishing hole gouged out the Erzbach valley mountains in the name of iron and steel production and still very much an active quarry. KTM’s groundbreaking new Transfer Port Injection (TPI) fuel injected 2-stroke KTM 250 EXC TPI and KTM 300 EXC TPI models deserved a monumental location like Erzberg to host the world press launch. 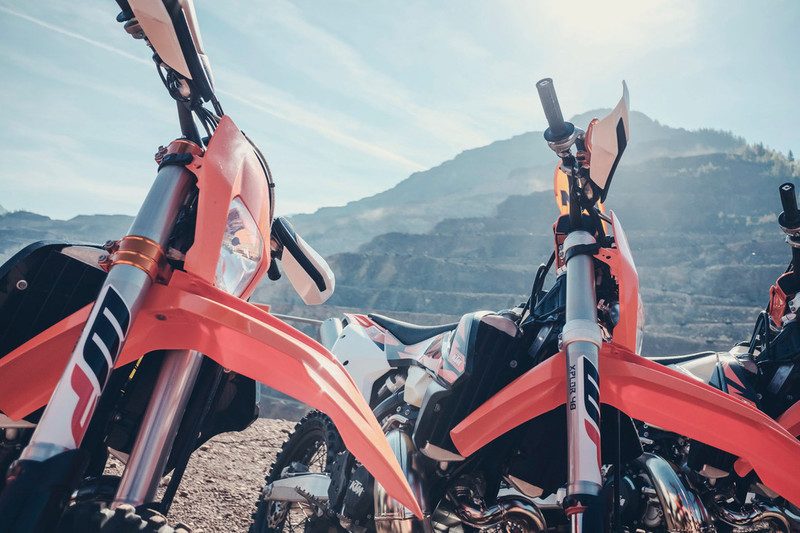 Arriving at the foot of the Erzberg quarry is, in MotoGP racing terms, like turning up to Assen or Mugello circuits or like rolling off the ferry for the Isle of Man TT races. For motocross fans it is like crossing the bridge to arrive at Namur’s famous hillside circuit. There is an awesomeness about these venues which makes the hairs stand up on the back of the neck: the history, the blood sweat and tears expressed over decades of bike sport.

Well over a decade in development, TPI technology is the next generation of 2-stroke offroad motorcycling. The new engine was highly anticipated not least because the world of Enduro wanted to know just how the fuel injected engines would perform and feel alongside the established carbureted EXC models. 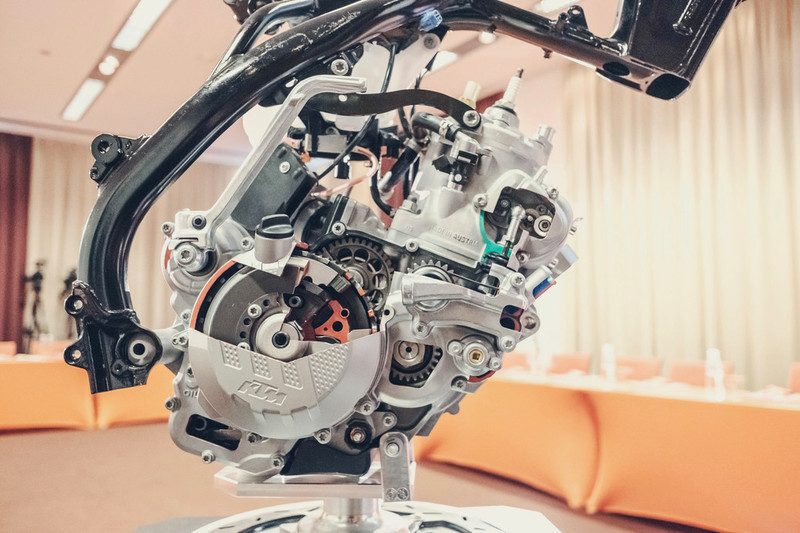 With ‘guides’ to lead them around the epic quarry, including three-time Erzbergrodeo winner Jonny Walker, KTM test rider (and Extreme Enduro rider) Lars Enoeckl, plus the infamous ‘Team Letti’, Manuel and Andreas Lettenbichler, this was no run-of-the-mill test of the new machines or the world’s offroad press. Having any of those guys in charge of the riding was easily a double-edged sword: they made everything look easy but at the same time made sure every journalist has no chance to take it easy!

Straight into a mix of incredible riding conditions, groups were ushered into the Erzbergrodeo’s famous killer sections like Carl’s Diner, the Three Kings monster hill climb and technically difficult Dynamite, each of which tested rider’s ability and resolve as much as the new EXCs.

You could say it was a risky choice to launch the completely new and groundbreaking engines in such a tough environment but KTM isn’t shy about standing up to be counted. With a history of launching its new model Enduro range at iconic venues like Romaniacs and Hell’s Gate it is the kind of bold statement which shows the confidence KTM has to prove the bikes are as READY TO RACE as they say they are. 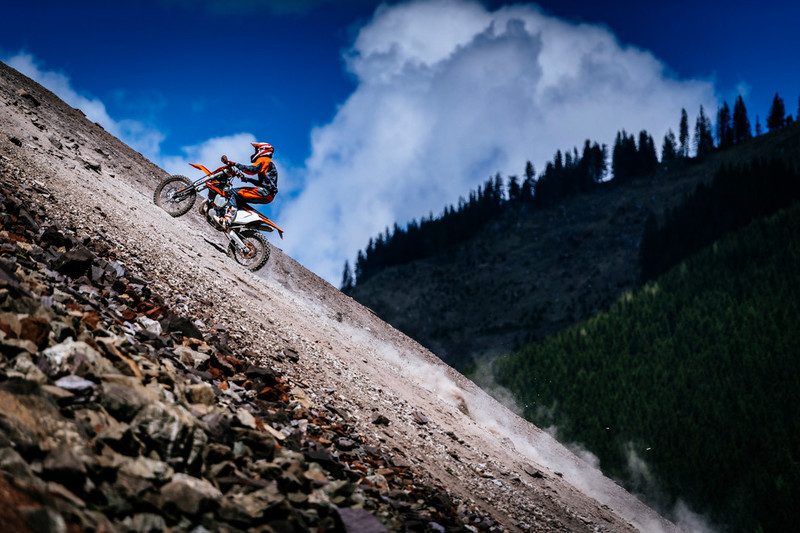 Some key elements of the new TPI engines are easily proved or disproved at the Erzberg quarry. Chasing up Erzbergrodeo’s toughest sections, particularly immense hills the TPI engines were pushed to their limits: if you wanted to test how a bike grips, drives and pulls gears then ‘Three Kings’ is the place. Attacking the same hill on the KTM 250 EXC TPI and then the KTM 300 EXC TPI, or trying different gears illustrated the small difference between the two 2018 models (just a few horsepower) but more importantly the big differences between carbureted and TPI models, between new and old technology.

Where there’s an up there’s always a down of course and the feel from the Brembo braking system on the EXC models, plus a slight change to the front fork setting was equally tested on hills which are no place for vertigo sufferers.

The amount of time spent picking through the rocky and technical sections of the Erzberg quarry was a perfect test for the lower end of the TPI system’s power delivery, throttle response and the fueling. Hard work for the riders legging their way through rocks, it was no walk in the park for the bikes either and it proved perfect test in demonstrating Lars Enoeckl and the other development test riders had done their jobs well over development period of the TPI engine. 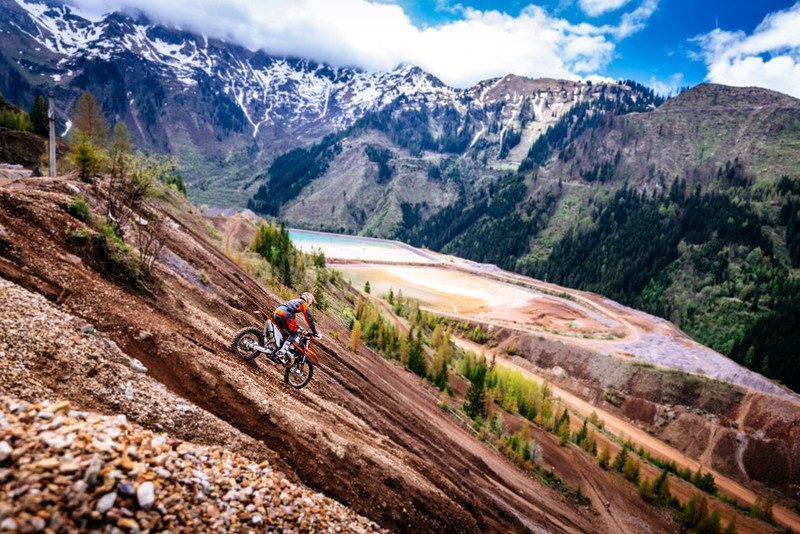 The new engine brings with it much improved fuel economy too and, again, there was no shortage of conditions to test KTM’s claims on improved fuel consumption – not least those monster hills providing no shortage of full-throttle action. Proof is always in the pudding and after three hours riding bikes we´re arriving back at the lunch stop (the KTM Factory Racing truck and awning perched on the side of the Iron Giant) with fuel tanks still washing with fuel.

You can’t say KTM didn’t set out to impress with the launch of the 2018 KTM 250 EXC TPI and KTM 300 EXC TPI machines. An unfathomable amount of development has gone into the way the new engine works, focused around the philosophy to make the bike as READY TO RACE as ever but crucially with this innovative technology, to make it not just feel, look and sound like a traditional 2-stroke engine but to make a step forward in the evolution of Enduro 2-strokes.

Impressed by the Erzberg venue, test riders from the global offroad motorcycle media left the impressive scenery equally as impressed with the new era in 2-stroke Enduro bikes.