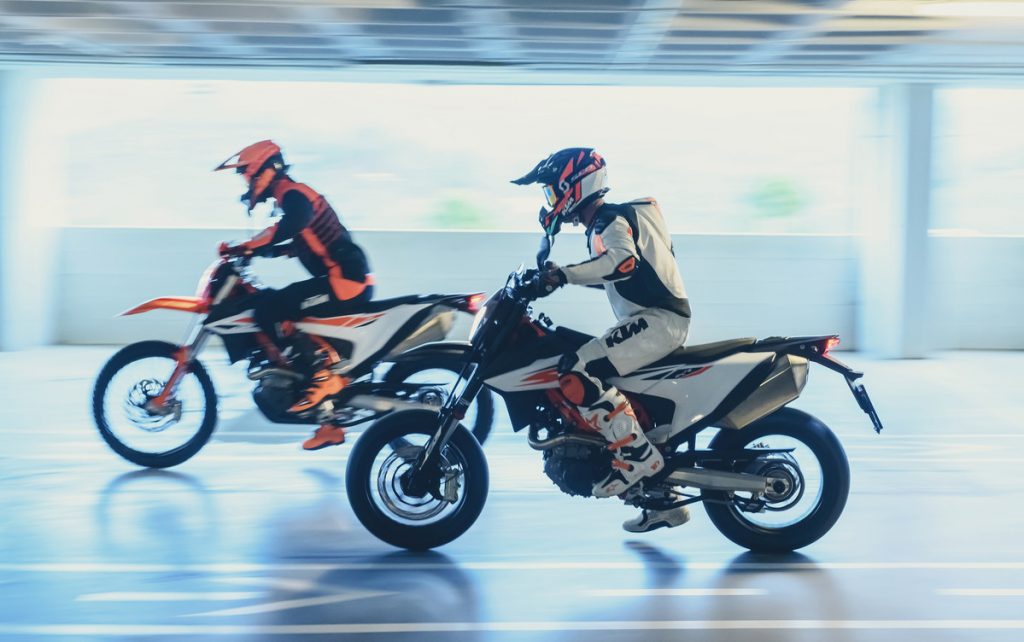 Switchcraft: Ride modes for your mood

KTM BLOG discovers more about the host of electronic rider aids on the new KTM 690 SMC R and KTM 690 ENDURO R, including the new riding modes easily operated by the push of a button. 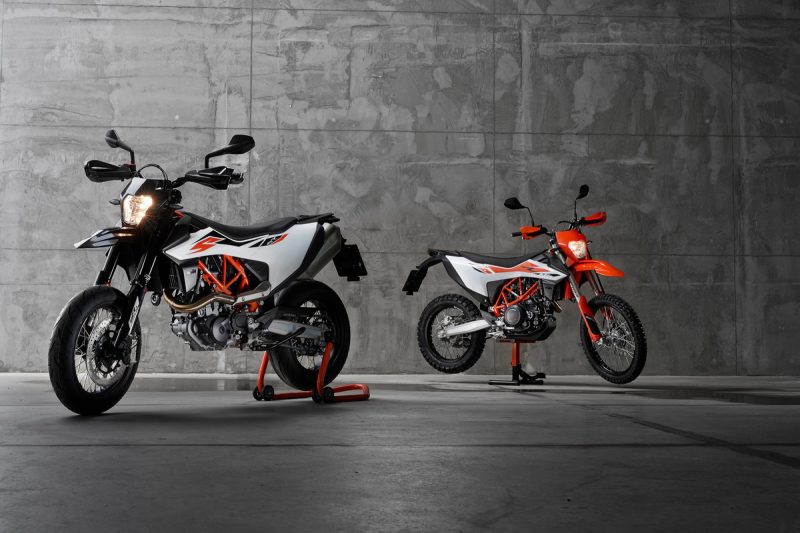 A psycho supermoto and a long-distance enduro that are both high performance, big capacity single cylinders that are hardcore and street legal. These distinctive attributes aren’t commonplace in the motorcycle market and require a certain character who wants one. And these are the characters KTM likes building bikes for.

Creating such unique machines around the various regulations placed on manufacturers isn’t easy. But for the new KTM 690 SMC R and KTM 690 ENDURO R, both bikes didn’t just get updated for compliance but had a whole host of new features developed for them.

A whole host of electronic systems come fitted straight out of the box – ABS with cornering sensitivity, lean-angle sensitive traction control, Quickshifter+ and two different ride modes that can be easily selected from a new bar-mounted switch. The previous versions of these models had ABS and just a switch under the seat to choose from three selectable engine maps (comfort, street, sport) and an additional “bad fuel” map; nice to have the options, but not very practical on the fly …

ABS has been mandatory (and rightly so) on new motorcycles from 125cc and above in Europe since 2016 but KTM took the opportunity to also fit the cornering ABS function to these bikes – it allows the rider to commit to their line mid-turn and apply full braking power should the unexpected happen. Not a system to rely on at every corner but incredibly comforting to know it’s there. With a KTM PowerParts dongle, Supermoto and Offroad ABS functions are also available, allowing the rear wheel to be blocked and removing the anti-roll function. The ABS can also be completely turned off, if you’re that way inclined …

The Quickshifter+ is purely performance orientated and makes a big difference to riding comfortable, saving time, mental effort and, of course, energy in everything from flat-out missions to gentle commutes. So, what about traction control? Is it really necessary on a single? 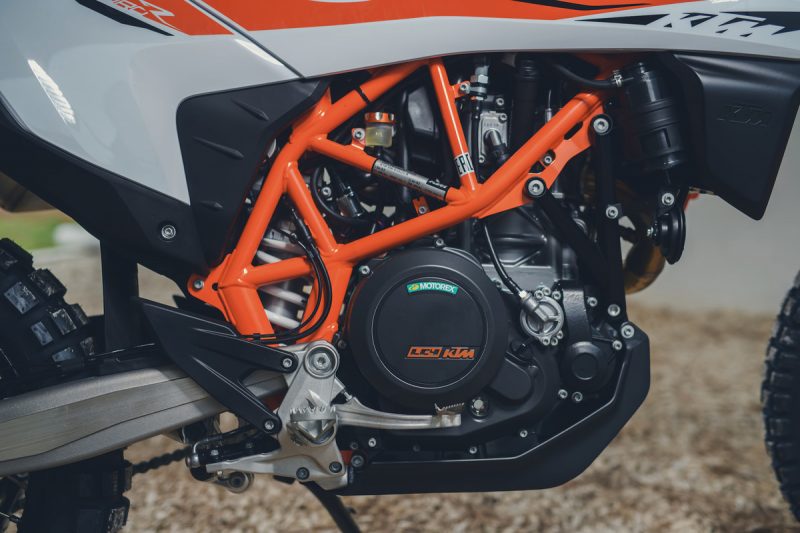 Power wise, these bikes take advantage of the increased performance from the latest generation LC4 and, at 74hp, are the most powerful production single cylinder bikes. Very healthy indeed, but not MotoGPTM or KTM 1290 SUPER DUKE R leagues. The 690s do, however, make a big punch of torque – 73.5 Nm. This is around 10 Nm less than a modern 1000cc sportsbike in a package that weighs at least a quarter less. Epic fun in the right conditions, but think about that on patchy tarmac or deep mud …

“The KTM approach to fitting electronic systems has always been the same – to add to the riding performance of the bike and increase safety without diluting the experience,” said KTM Product Manager, Adriaan Sinke, to the world’s media in Portugal at the launch of the two bikes in February. “The ride modes are there to allow riders to get the most from the KTM 690 SMC R and KTM 690 ENDURO R in all situations and conditions.”

Indeed. The Mattighofen massive decided to implement motorcycle traction control (MTC) with cornering sensitivity to the KTM 690 SMC R and KTM 690 ENDURO R. And as part of its two selectable ride modes operated by a new switch cube on the left bar, the amount of traction, anti-wheelie and the throttle response can be quickly altered to suit the riders’ ambition, ability and conditions.

The layout of the switch is simple and is formed for easy application with gloves on the move. The ‘map’ button at the bottom allows the selection of the two ride modes, which are illuminated when active – white for ‘1’ and green for ‘2’. The map mode can be pressed at any time and after that gives the rider five seconds to close the throttle in order for the desired mode to be activated. The five seconds and chopped throttle is to cover for accidental selection.

At the top is a ‘TC’ button and also an orange TC-LED, that flashes when the system is detecting and reacting to a slide and, when held down for 5 seconds, deactivates the traction control altogether and remains illuminated. 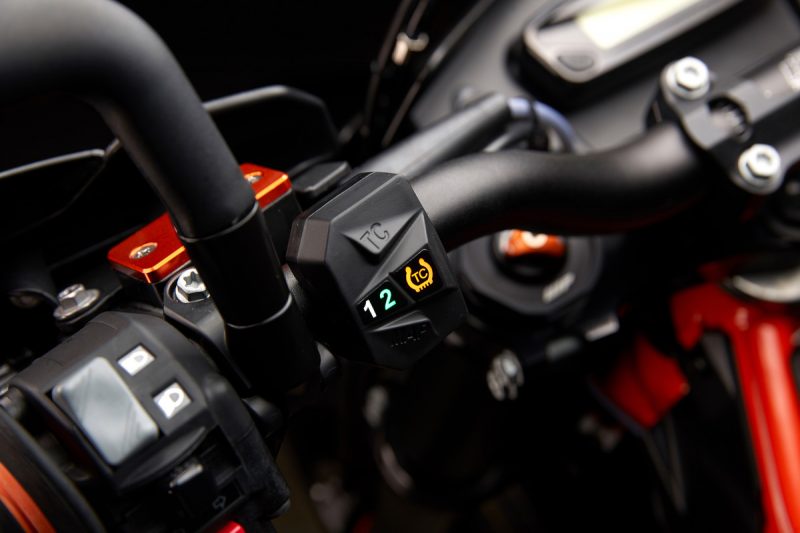 So, what are the modes? 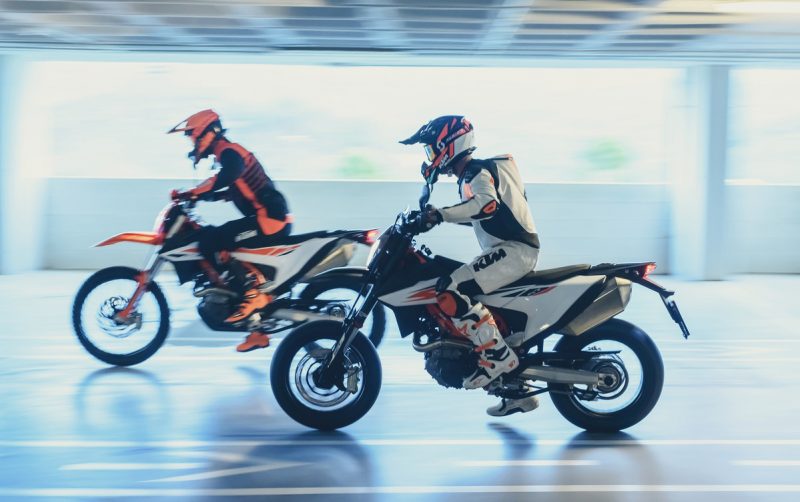 To give you an idea of the level of effort and development put into the new ride modes, this little controller is the first CAN bus related switch for a KTM and represents almost two years of work and the integration of much personnel from the KTM R&D team responsible for these new bikes. We grabbed a quick word with two of those people responsible.

Thomas Nussbaumer, KTM R&D Team Leader Electronic Sensors/Actuators: “When we started with these new 690s, the questions we asked ourselves was how many modes are necessary. And what options do we have for changing these modes while riding. The challenge was to find an agreement between the modes, implement this in the switch cube and for the rider to be able to change between the modes without much thought. To keep it simple as possible.”

“It’s the first time a KTM mode switch is communicating via CAN bus with the engine management control unit and ABS control unit. It’s getting data from the wheel speed sensors, lean angle (5D/6D sensor) sensor and the engine management is getting data from the ride by wire – such as requested torque – then we get the data from which map is requested. On the old versions of these bikes you couldn’t do that while riding. But with this switch we’ve been able to build up the architecture to do this when riding – even with anti-wheelie functions.”

Daniel Esterbauer, KTM R&D Electronic Sensors/Actuators, continues: “The two ride modes we have are perfect. Take the SMC R for example, we had to focus on two different rider levels: Road riders with less track experience or aspirations and then professional riders who spend a lot of time on circuit. So, we had to find a way to get both parties satisfied and here is where Street and Sport modes deliver excitement, confidence and safety, with their unique response and TC interference.”

“We wanted to avoid a situation where a professional rider sits on the bike and the first thing they do is deactivate the TC. The system has to perform better than OK for even the best riders – making them feel like they are not being held back. But the modes can also be used to suit the terrain and weather conditions.”

But what are the modes like in reality? Tom Booth-Amos is a Moto3 rider for the CIP Green Power KTM Team and a former two-time British Supermoto champion. He was invited to the launch and was able to test the ride modes on a very wet Kartódromo Internacional do Algarve circuit. Check out this onboard 360-degree video to see what the conditions and fun level was like.

“I’d never ridden using traction control before the KTM 690 SMC R but I have to say the system was incredible,” said Tom. “We were on street tires in the rain and I could see the light on the switch cube blinking to tell me the TC was working, but the system was smooth in the way it intervened. Without it, I would have just been stood at the side of the track with a sad face on and not riding, but instead – and with the Supermoto ABS on – I could push the bike hard in the conditions and still slide around.” 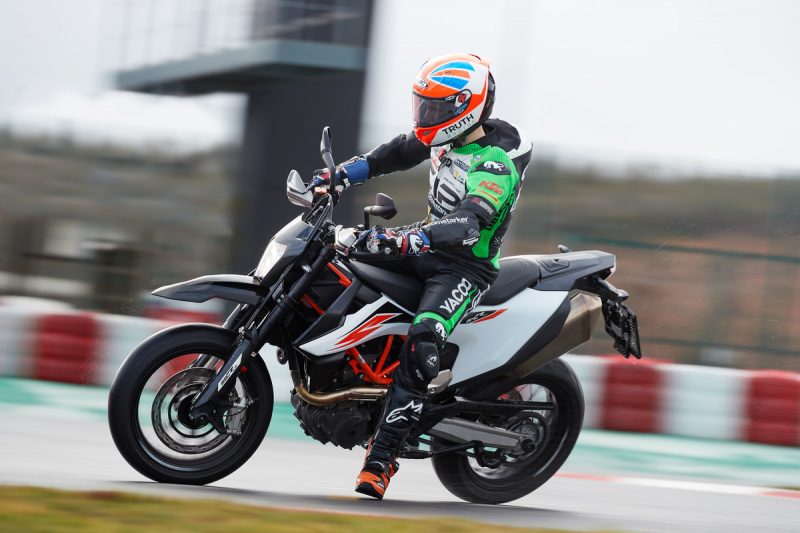 As for the KTM 690 ENDURO R, at the same event a very experienced, fast enduro racer and KTM employee (ED – who shall remain nameless) rode for a whole day mapping out the offroad course for the media on mud and sand, thinking he’d deactivated the traction control when he actually hadn’t. On being told this, he was amazed by the traction he’d been getting all day without ever noticing the system working. How is that for impressive? He was embarrassed … 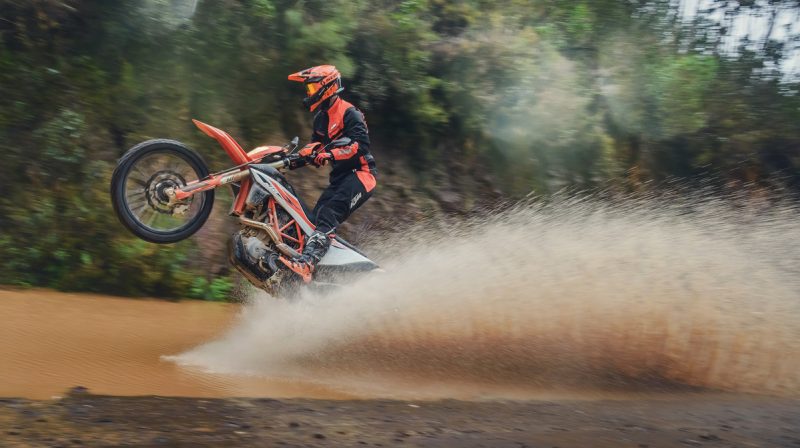 So, do riders of these bikes need these features? Well, motorcycling has been around for a long time without them. But if ride modes coupled with a brain that thinks and acts within milliseconds means you get the most from the machine whatever the conditions while having fun and be safer, isn’t it time to make a switch?

Discover more about the many features on both the KTM 690 SMC R and KTM 690 ENDURO R at www.ktm.com and at the nearest KTM dealer.