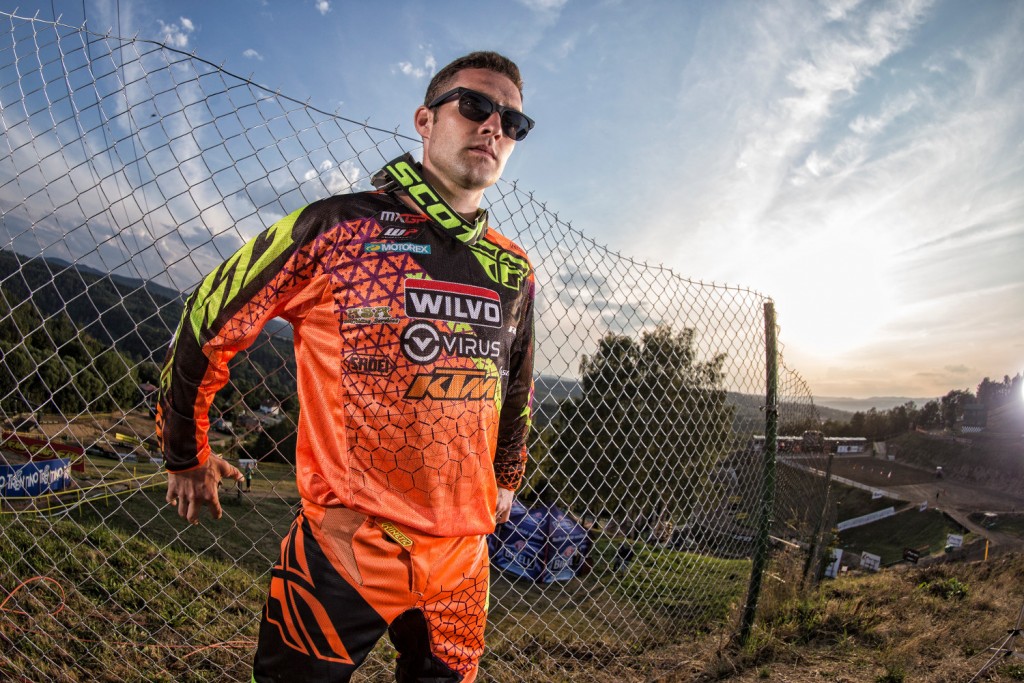 The Hard Push: Fitness for offroad

Riding offroad is damn hard. There is probably no other form of motorcycling that is so demanding both physically and mentally … especially when it comes to competition and from Rally to Enduro to Motocross. What does it take to make it at the top level? To win races and lead rivals in an FIM World Championship like MXGP? How do the pros rank with other sportsmen? We asked around in the Grand Prix paddock and cornered Wilvo Virus Performance KTM double British Champion and GP winner Shaun Simpson for some insight … 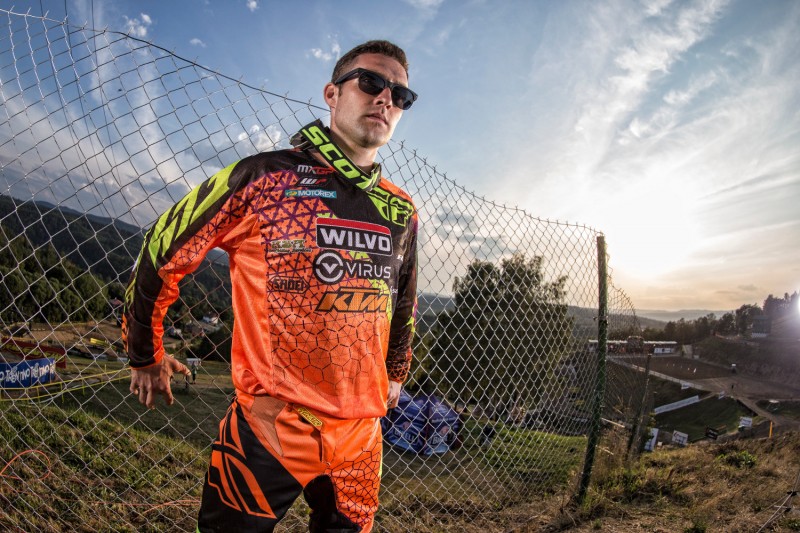 “Riding a bike is much tougher than it looks,” says German Sport Scientist and trainer to MXGP athletes Stephan Nuesser. “In the race the riders have heart rates of 170 to 190 beats per minute. Over two thirty-five minute motos; that takes a lot. Also impacts after jumps, bumps, berms etc takes a lot of energy.”

In the search for sustained peak performance and a condition to limit injury across a season that might last at least twenty weekends and 60-70 race starts, professional Motocrossers take their training very seriously. For the better part of four decades an intense form of physical preparation has been absolutely key to success in a sport that drives man and machine to such extremes. Motocross has seen an influx of professional trainers since the start of the century and is rapidly trying to catch up with the advancements made in other sports. “Unfortunately there isn’t a lot of scientific knowledge, study or sport-specific information about MX,” says Nuesser. “Every top rider now has a ‘kind of’ trainer – which is good – but I still would like to see more professional trainers working in MX.”

In the case of MXGP – eighteen rounds of two motos each, plus a qualification race on Saturday and a slate running from February to the end of September – then the scheduling largely dictates the training program. Each rider has a personal and preferential approach and most do not like to get specific about their regime but it is fairly common knowledge that the months of November and December are used to build a physical ‘base’. October may have been useful for testing for the following season as well as a well-earned holiday. January will involve more tests and serious saddle and practice time in the run up to pre-season internationals and ‘warm-up’ events prior to the launch of another MXGP campaign.

“The base I build up is really low intensity, quite easy-going work, longer duration cycles, lower heart rates,” Simpson reveals. “It is quite a long phase with a lot of balance and core exercises. A lot of really monotonous stuff. And then I start throwing in the interval work later on. Base training gives you a better platform for the next stage to be built up on. So the wider that is, the better. It’s like you are building a pyramid; you want to start with the biggest base as possible, so you can go higher and then during the season you have it to fall back on in terms of recovery.”

The ‘base’ work can involve a range of activities such as alpine or biathlon training, simple cardio like cycling, running or swimming. That bout of preparation comes after a post-season break for athletes, which is almost physiologically essential. “Someone explained it to me once as if the cells in your body are like a sponge,” Simpson continues. “When you give your body enough time – around six weeks – that sponge is completely open and ready for ‘action’. When you’ve finished a long season then it is compressed and it can’t absorb anything so then you have to wait.” 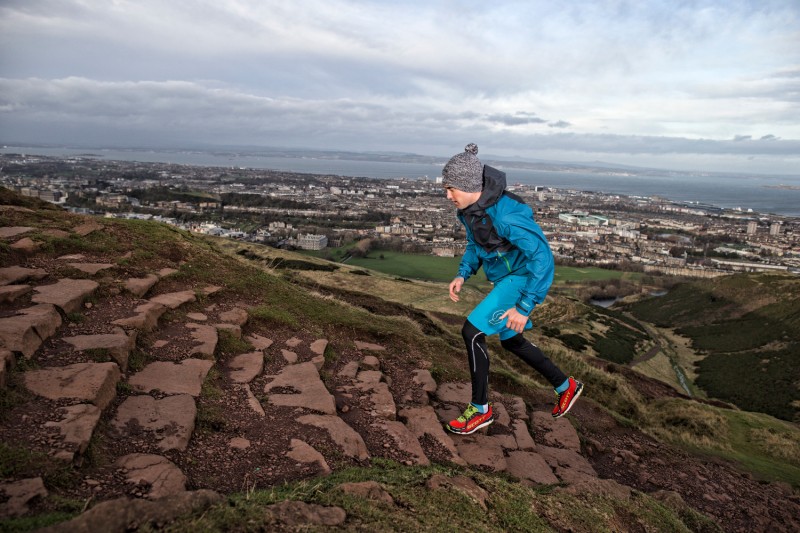 How fit do Motocrossers really need to be? Strong? Flexible? Mountains of stamina? Bulging muscles? “You’ve got to be a full package,” Shaun says. “You’ve got to have some muscle but not too much so you’ve got endurance and agility. You’ve got to be lean but still have enough reserves. You see some MX2 [250cc] riders that they are cut really lean because they’re keeping their weight down. I’ve always found if I get lighter and lighter and go below my race weight then I have the feeling that I don’t have the reserves anymore. So it’s a difficult one.”

Whether it is in the base phase or the hard intervals or the season routine of topping up their physical work, riders have to strive to be as potent as possible when race day comes. “I don’t think you look at the calendar or timing as crucially as an athlete might for something like the Olympics but you need to be in good shape for a long period of time, and that means being sensible about your training, hitting your interval training, hitting your base training, and making sure your recovery, sleep and nutrition is on point,” Simpson opines. “I think that’s as simple as you can make it because there’s a lot of advanced stuff in there! Small things like keeping track of your heart rate in the morning so you know where you are with regards to your recovery from the day before.”

There have been some suggestions by experts that the general fitness of a Grand Prix or AMA Supercross athlete would be on a level of a professional cyclist. Certainly someone who turns their hand to triathlons. “I think that a few riders are on a really good physical level but perhaps not comparable with an Olympic cyclist,” says Nuesser. “But you need to realize that Motocrossers are often on the circuit and they can’t afford the time on a bicycle compared to a pro cyclist, so that makes it a bit difficult to compare. Considering the time the MX riders spent on physical training they are at a very good standard.”

“Running, triathlons, swimming, cycling; that’s endurance so I think a lot of guys could do that because we mix our training up that much,” Simpson says when asked if his efforts could translate across to another sport. “We do a lot of swimming, do a lot of cycling, do a lot of running, so something like that.” 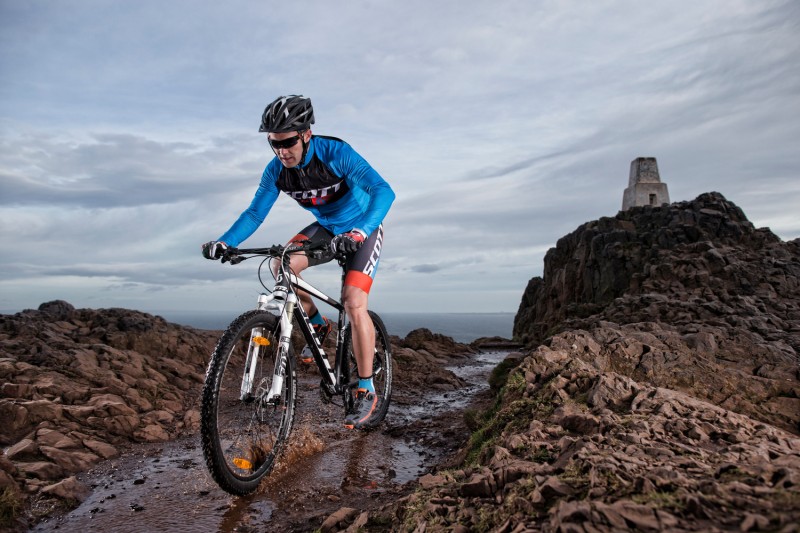 Form, confidence, injury, recovery and rehabilitation are also other major factors in offroad racing. More often than not it is a case of ‘when’ rather than ‘if’ a rider will need to tackle a physical problem and blood disorders or viruses from pushing too hard are other follies a pro needs to be acutely aware of. “You can’t train normally and have to find something different and you cannot ride the bike, so then you lose your bike fitness,” says Simpson of the adversity of injury and who actually missed two Grands Prix with a broken right hand this year; his first major problem since 2009. “So when you get back on the bike you start pushing that level up close to the red zone and you’re really working hard. You have to watch to not go into the red and do too much because your routine has been thrown out and races are coming up on the calendar thick and fast. It’s a really fine line. You wouldn’t believe how hard it is to stay on the right path. I’ve had weeks where I feel full of energy and then three weeks later you feel absolutely zonked.”

The sweat poured into a set of Grand Prix motos is only a fraction of what is a lifestyle, and a total commitment to their profession and near-obsession. Woes betide any ‘mortal’ that finds themselves next to a Motocrosser in the gym, especially in the winter! “It’s only maybe forty minutes long so you come in, do a stretch, get ready, do a warm up and then hit this forty minute session,” Shaun says. “I get all set up and I’m sweating bullets and I’m really pushing it. I can sense people around me thinking ‘whoa’. They’ll be in-between reps, talking or playing on their phone. Sometimes I’m in my little recovery period and just think: ‘I’ve definitely worked out ten times harder than they’ve come to the gym’ but then sometimes you look at the guys that are pushing a 200 kilos bench press and some things that I could never do because that’s not what I’m built up to do!” 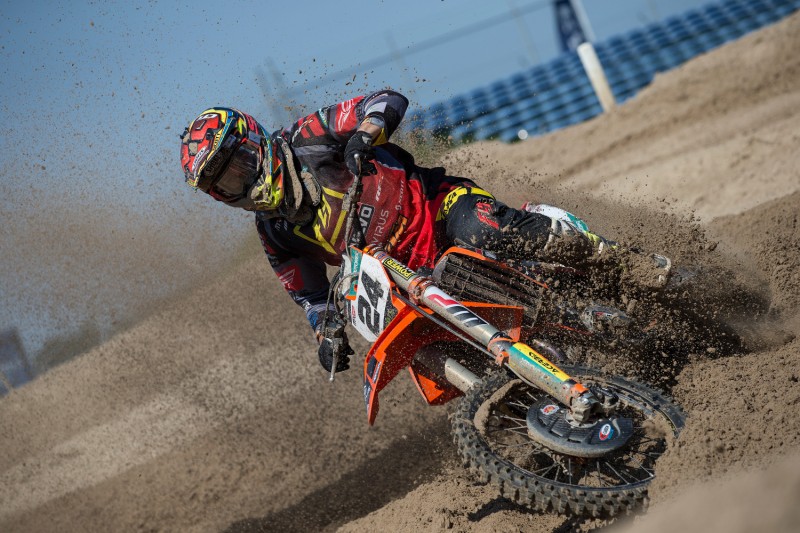 How would a normal person fare with a Motocrosser’s workout? “Well, it’s like exercise, recovery, exercise, recovery. And the recovery is just enough to catch your breath, look at your sheet to see what the next thing is and go again. And I always believe that in training if you know ahead what you’re going to do, if you look at that sheet and you’re like ‘I’ve got to do that, that, that’ and you mentally say it to yourself then you’ll be ready … and I think you could probably keep up for one session. But afterwards you’ll be absolutely ruined and if I said, “right, tomorrow we’re going to do that again” mentally I think that would be pretty tough!”

‘Tough’ and ‘Motocross’ could be synonymous words but at the root of all the graft is the basic enjoyment of going fast on two wheels and constantly finding new boundaries on the motorcycle. A rider’s body is part of the ‘set-up’ for how well, fast, smooth or enduring he wants to be. “It’s nice to have that package of skills and capabilities for a sport with such variety,” muses Simpson. “If you’re a Tour de France cyclist then I imagine those guys must hate cycling at the end of their career because they’ve just done that same motion with their legs for years and years. I like cycling, I really do enjoy it, but if I had to go out and do 100-150km every day just to train or do intervals or hill sprints then it would be pretty tedious. With Motocross you can go on hard-pack, sand, ruts, do Supercross, different conditions, wet, dry. But on a road bike it’s wet, dry, road, flat or hills; there are not too many variables there and it is similar with swimming or running. We’re quite lucky.”

152 Responses to The Hard Push: Fitness for offroad