Roger De Coster has been rightfully lauded for the role and leadership he has brought to KTM and the wins and title success enjoyed by the likes of Ryan Dungey, Marvin Musquin and Ken Roczen and with the KTM 250 SX-F and KTM 450 SX-F in the last five years. Of course it is a team game, and one of the most important people supporting the famous Belgian is South African Ian Harrison. The Technical Director initially linked up with De Coster at his previous team and then continued the relationship when Pit Beirer and Robert Jonas overhauled the Red Bull KTM Racing operation around the end of the last decade. The partnership has been emphatic. Based out of their homely Murrieta workshop, KTM are now one of the powerhouses of the busy American racing scene. When Roger called and asked you to come to KTM what was going through your mind?
“I remember that time, it was back in 2010 and we were still at Suzuki and things were slowing down there because of the recession and sales were weak. We didn’t have any news from them and I talked to Roger about something else I might have in the pipeline and he told me to wait. Two days after he told me about the KTM deal. To be completely honest with you I said to him “are you crazy?! KTM have never won a race [in the 450 SX class]. Can you imagine what a task that is?!” He said that he was positive that they were ready to go and to move forward quickly. I knew Pit [Beirer, Motorsport Director] from a long time ago when I raced in Grands Prix with Greg Albertyn in the early 90s. He contacted me a few times and it didn’t take me long to come onboard. I was still a bit sceptical but once I joined and saw the commitment being made to getting rigs, dynos and infrastructure we needed – it all moved so fast – was incredible. The progression was very quick and we also had two very good riders coming through at the time that were Ken Roczen and Marvin Musquin. But needed to build confidence with the 450 and I knew we’d have a good possibility to get Ryan [Dungey] because of the connection Roger and I had with him. We’d already worked together for five years so it was just a matter of time before things came together. The more I learned about Austria, the factory, the engine development and the commitment to offroad racing the more I knew I had made the best decision of my life.”

“The more I learned about Austria, the factory, the engine development and the commitment to offroad racing the more I knew I had made the best decision of my life.”

So for people who see you in photos, around the track or in videos can you just describe some of your responsibilities?
“Sure, basically I am the link to Austria with sending information back and forth and giving them ideas on what we think can be potential problems or improvements because of the racing environments with Supercross and our national series run in the summer, which can be pretty hot compared to the European races. I’m the main link. At the previous manufacturer I used to do a bit more engine development but with Austria this is not a problem and I can focus on other areas. We have worked a lot on chassis development and suspension. I’m not saying things were wrong, rather we have been working to find the right balance of the bike to race Supercross and moving forward in that direction.”

Can you describe what it is like to work with Roger?
“It has been twenty-two years now, basically my whole career. What can you say about a guy who has worked at the very top level of racing for over fifty years of his life? He has truly seen it all. What amazes me most about him is how quickly he can find a solution to a problem. He was a racer and didn’t have an engineering background but he far surpasses many technicians because he can think so quickly. Even though we develop bikes and they get better and better the same problems can reoccur and he has seen that over the years. He basically knows how to adjust and how to fix. As a boss, well, I don’t see him as a boss but more like a friend. He has always treated me that way and is very methodical in moving your responsibilities when he feels the time is right.” 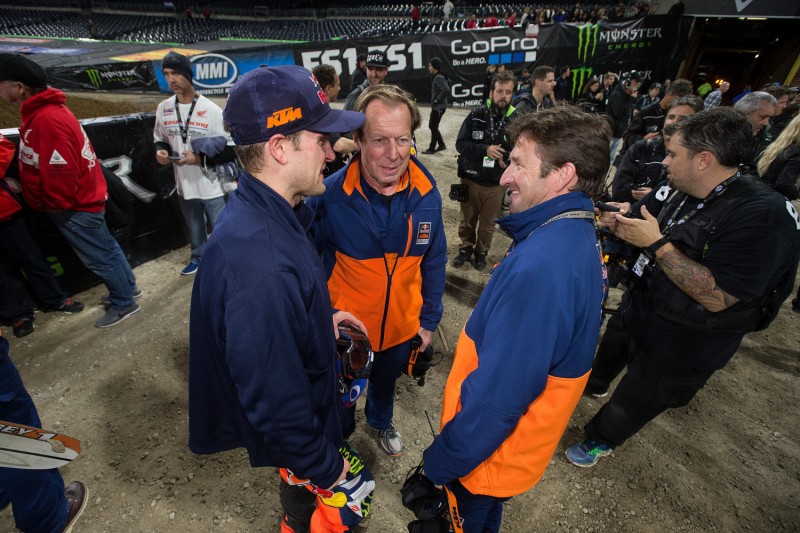 How is the dynamic between you, him and between the team? Do you deal with riders on a personal level as well as a technical one?
“Yes, absolutely with the riders and we know each other’s strengths. There are times when I will say ‘you need to go and talk to him …’ or other times where he will be frustrated and will tell me “you should go and talk to him” because he didn’t want to blow it today! I think that is part of the strength of the team. I think if a rider lacks confidence then simply some words from Roger can give them ‘power’ and for that he is the one who normally talks with them. We bounce ideas off each other, whether it is getting new riders or which direction for set-up or what we should do for improvement for the following season. Roger is always thinking ahead and makes sure that we do also.”

Ryan took the first 450 SX win in that first season. A lot was written about how that happened and the strong link with the factory in Mattighofen. But what about sustaining that success? You have reached a peak – five titles at least – but you are still there …
“That’s the most difficult part. Once you get ‘there’ then you have all the other guys targeting you and looking at what you have done. They have a navigation trail to follow. It is hard to be at the front, leading and still keep moving forward. That is where Roger will come in and put pressure on people to keep pressing on and asking where we can go and what we can do. I think Pit is like that too.” 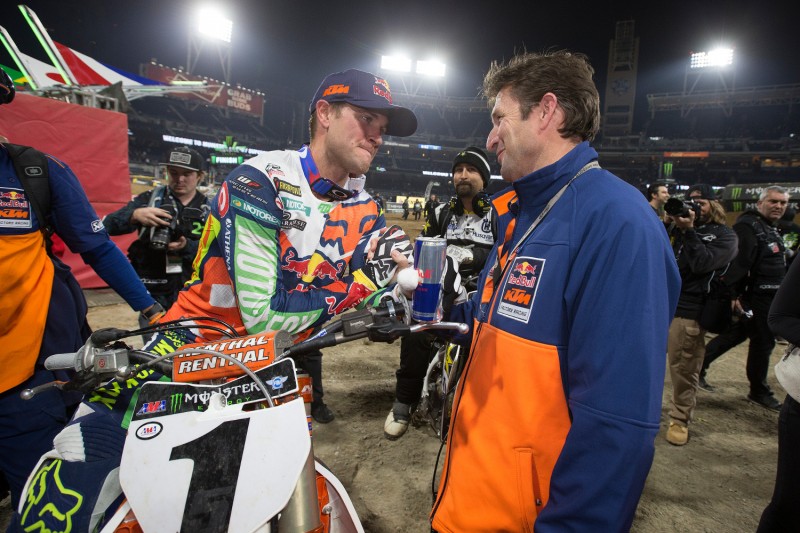 It must be like a pressure cooker with every title and every passing year … you must have a sweat-on sometimes …
“It is and we do! But you have to remember that it is still motorcycle racing and the biggest factor you have is the rider. You need a good rider and the best way to do that is to show them that you can be competitive with multiple athletes. It gives you much better access and possibilities for other riders and the future. If you don’t have that [special] rider then you can still have the best bike and be sub-par in your results. That is the biggest pressure point: ensuring you have the best bike and convincing the best riders that this is where they need to be. Otherwise we have a lot of the ingredients already. We have a great title sponsor that a lot of people like and a good team of people but we still have six other factories to compete against and they all want the same thing.”

How has the structural change with the new 250 team affected your job?
“Well, we wanted to grow. Initially starting here with 450 and 250 riders was a way for us to get athletes into the pipeline and not lose them to Pro Circuit or Geico as well as show that we could be competitive and ready to win. That worked, but to grow the team we knew we could not handle more than two riders in each class. With one on each coast we also knew that if they got hurt then we wouldn’t have anyone out there. So the next logical step was for us to be the 450 team with three or four riders in the main class – which would give us more depth – and a 250 team with two riders on each coast as well as that ladder for amateurs to come up. I’m really happy with the set-up. We still run all the technical information through the factory and it is a bigger workload as we have more riders but it is the right way to do things. Again, it has moved very quickly. In one year they moved from being a support team to a factory team and the steps have been fast.”

Injuries are such a big factor; they can mean the difference between being there to win and take good results and not being present at all …
“They are. It is a big, big factor and maybe the worst thing about our sport. You cannot ride injured. If you hurt your knee or sprain your ankle it is impossible to be at your optimum level. I think some people can forget this about the riders. They practice so much during the week and there are those moments when they might catch a leg in a rut and they are racing hurt. It is tough to contest seventeen rounds in eighteen weeks and stay healthy that whole time. It is brutal.”

Lastly can you – personally – keep going with that schedule of Supercross, Motocross, and events like the Monster Cup and Red Bull Straight Rhythm?
“The schedule is also brutal and I think if we have riders in different countries competing in different series we must be careful not to overlap them too much and not give them the appropriate time off to recover and take a break. Otherwise we will burn them out and see more guys like Villopoto and Carmichael end their careers early, I believe. The rate they go – training all year round – I don’t know how they do it. I think with motorcycle racing there is also that edge of fear that comes into it. It is very dangerous and you can really hurt yourself with a small mistake. Coming back to your point, I think we cannot make the calendar too big … and for me? Well, I don’t think too much like that! I love coming to the races and honestly it is one of the easiest days because we should have prepared well and should be able to enjoy it and see the benefits of our labor. It is not a tough part for me … but for the riders it is something else!”

“I love coming to the races and honestly it is one of the easiest days because we should have prepared well and should be able to enjoy it and see the benefits of our labor. It is not a tough part for me … but for the riders it is something else!”

75 Responses to The man behind the man