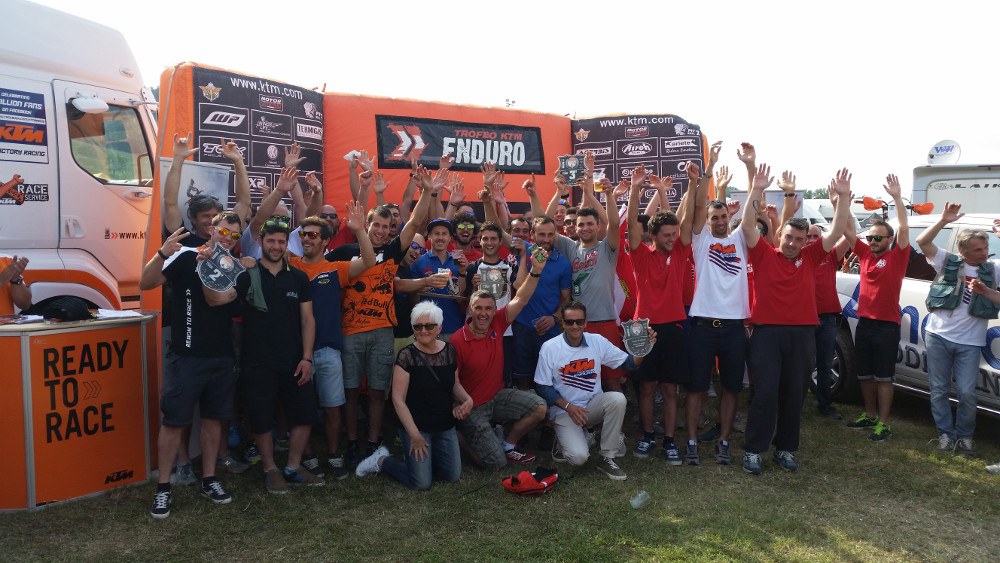 KTM Italia has been running the brand’s Enduro Trophy since 2006 and each year has welcomed new Orange Riders who exude their passion for KTM and the Enduro.

A caking of mud, dust and sweat: this is the destiny of offroad enthusiasts, a sought-after destiny that they have worked hard towards, that is well worth the effort of loading the bike onto the truck or van for each race. A sleek, revving bike is a beautiful thing, raring to go in its natural habitat.

This mindset lays the foundations for the Trophy, an event organized to meet the clients’ ever-growing demands and give them the chance to compete with their own motorcycles in a fun, professional and, above all, stress-free competition. 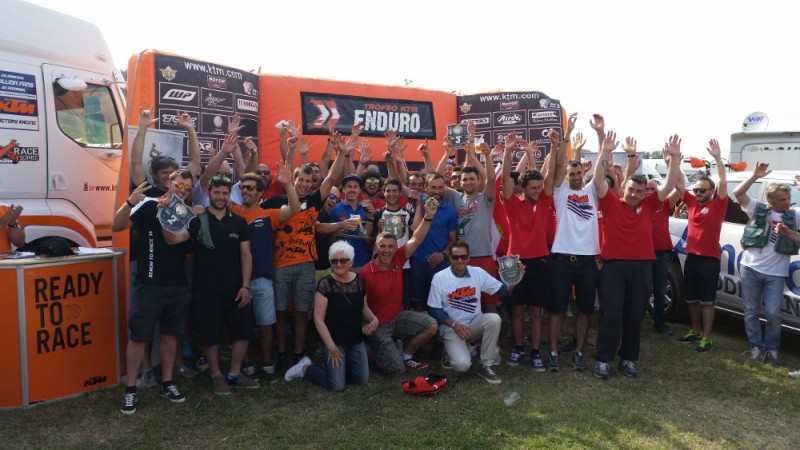 From the very start Roberto Rossi, KTM Italia Events & Motorsport Manager, was ideally placed to organize the Trophy. It was therefore Roby himself whom I wanted to interview in order to worm out all the secrets to success that he thought worth sharing with our KTM BLOG readers.

Roby, tell us about your success over the last ten years …
“2015 was the KTM Enduro Trophy’s tenth anniversary, bearing witness to KTM’s continued strength in the sector and, above all, hosting a record-breaking number of participants once again. The numbers speak for themselves. There are far more riders entered into the Trophy than we generally get at national championships.”

How is the Trophy organized?
“The Trophy is played out during six national races, generally held between March and October, with an entry fee that includes a comprehensive READY TO RACE kit containing a set of PIRELLI Scorpion Enduro rubber tires, exclusive bodywork for the BlackBird bike, competition and post-race motorcycle clothing, and plenty of special offers from our partners. The fastest riders win the top prize money. As for the others, during the season they get the opportunity to take home numerous products up for grabs in the raffles that support the initiative. The races also count on the help of WP Italia and Motorex, whose specialist mechanics are on hand to advise riders on jetting and how best to tackle the course. Then comes the grand finale and awards ceremony at EICMA, attended by the KTM champions.”

You talked about the number of riders who enter. What is a “typical” Trophy rider like?
“In our competitions riders race in the classic Enduro categories. For the final standings we’ve also added special classes to create interesting contests throughout the year. As a matter of fact, the Trophy was not just designed for people who dedicate their lives to racing. Instead it is aimed at all customers who, for six weekends a year, love spending time in a fun, dynamic and highly professional atmosphere where they can compete and enjoy the countryside and, why not, bring home a great prize.

The competition is split into E1 (2- and 4-stroke), E2 and E3, as well as Super for riders who have seen major national and international success. Under 18, over 40, 45 and 50, Veteran, and even Vintage for those who want to compete with period motorcycles. Lastly, there are also awards for club teams and those created by our authorized KTM dealers. Why not give it a go?” 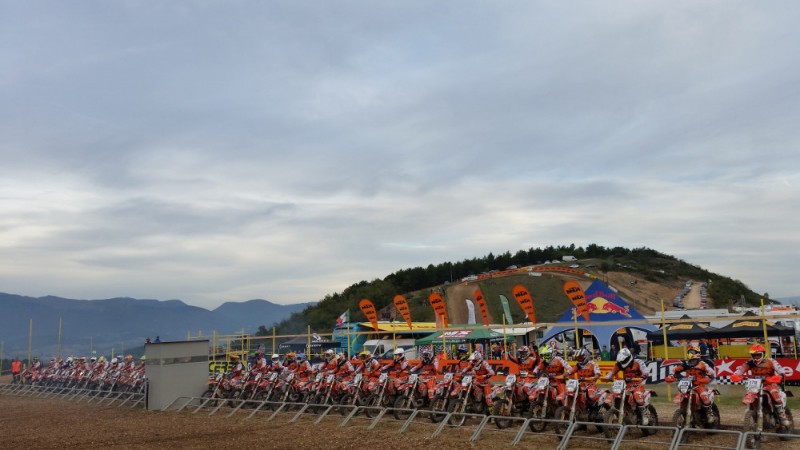 So a really diverse range of riders …
“Exactly. Very diverse, but certainly united by a huge orange passion! It’s wonderful to see father and son racing together. It’s wonderful to see the great Giò Sala, who often drops by of his own accord to congratulate the winners, handing out precious advice gleaned from his experience at the Enduro World Championships. It’s wonderful to also see Angelo Crippa, Managing Director of KTM Italia, lining up to race in the Over 50s like an excited little boy. For us, that’s exactly what READY TO RACE is about!”

Who lays down the rules for the Trophy?
“The Trophy is organized here at KTM Italia without the support of any external promoters and, year after year, we are improving thanks to the participation of local motorcycle clubs and trusted partners. All of the KTM races take place under the aegis of the Italian Motorcycle Federation in accordance with Italian rules. KTM’s specific role is to ensure that the club makes a profit from organizing the race so that it can reinvest its earnings in activities designed to promote and support the sport in Italy.”

Not just a competition then? What happens during race weekend?
“An ORANGE explosion! A unique vibe that greets the convoy of Trophy participants with a sportsmanlike, cheerful and professional atmosphere. There is no secret and no magic formula. It is simply a world where passion is king. The atmosphere in the paddock feels like a major event and the Village is incredible, with the club that organized the race working alongside the local authorities and residents to make sure that Sunday’s race is merely the pinnacle of a weekend-long event. The authorized KTM dealers are also at the forefront of the event, both in terms of running it and their presence in the paddock, with motorcycle displays and a temporary shop offering the very latest from the KTM PowerWear and PowerParts catalogs. 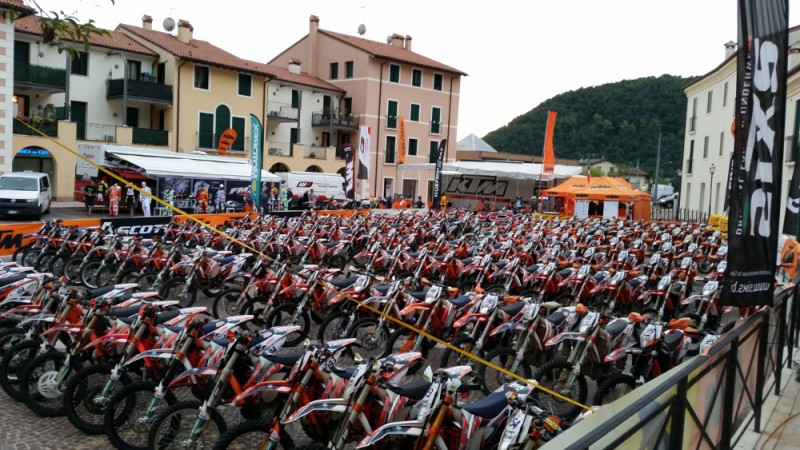 Six stages … Which was your favorite race this year?
“Each stage was unique and memorable in its own way, from the first one at Arma di Taggia with its beach racing, to the Sauze d’Oulx stage up in the mountains, with over 2000 meters of ascent / descent and breath-taking views over the Alps … But to be honest, the final stage at Esanatoglia was definitely the one that will go down in the history of the first ten years of the Trophy!

It was supposed to be merely the close of the 2015 Enduro Trophy. In practice we put on a real KTM Festival that put a smile on everyone’s face before, during and after the event!

The last week of October was bathed in sunlight and will remain in the minds of those who took part thanks to the variety of things to do, see and enjoy. Huge numbers of people literally ransacked the medieval town of Esanatoglia and its surroundings, transforming them into a playground for motorcyclists and cyclists from all over Italy.”

You mentioned a KTM Festival …
“Of course! Originally two races were planned: the final race in the Enduro Trophy competition and a KTM-brand Motocross race on the historic Esanatoglia course. Enthusiasm quickly became such that a non-competitive mountain bike ride was added to the program on the Saturday as well as a brand new mountain bike race on the Motocross course, complete with a starting gate start! The Enduro also had a Six Days style formula! Two laps through the hills of Marche region, drawing up the leaderboard, and then lining up at the starting gate for a thrilling final just like at the Six Days itself. There were alternating starts, special trials, and hourly checks that were fun not only for the riders, but also for the numerous members of the public who came for the weekend and who were lucky with the weather.

And to top it all: On Saturday evening Max Giusti [a very popular TV and radio star in Italy] performed a show in the center of Esanatoglia with his band and his own particular brand of comedy, perfectly ending an action-packed day in which he even headed onto the track to the delight of his fans.”

That’s what makes a festival: Enduro, Motocross, mountain biking …
“Exactly! Tons of riders, KTM champions, and much more! Esanatoglia hosted past Enduro greats Giò Sala and Arnaldo Nicoli, freestylers Vanni Oddera and Max Bianconcini, and former and current cycling champions Gibo Simoni, Diego Rosa and Marco Aurelio Fontana, the cream of the crop, with world titles and stories galore. The ten jerseys from the ten Enduro Trophy events were paraded down the runway, bringing back unforgettable memories and emotions for those who had taken part in and organized each stage of the Trophy. Amazing!” 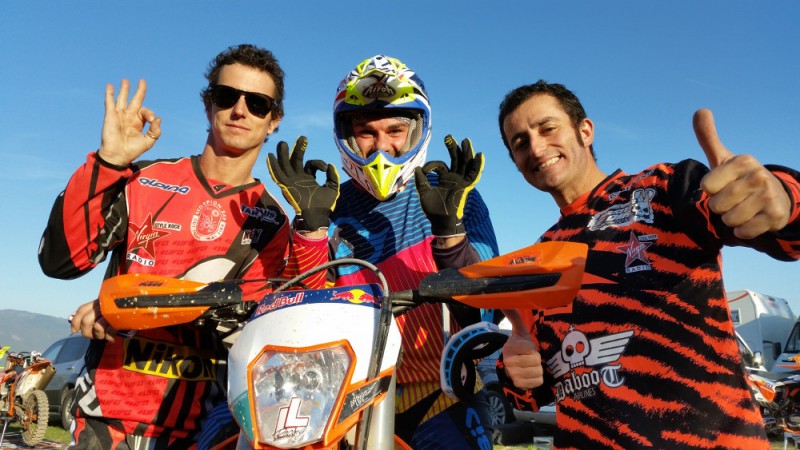 Roby, we know that cycling is followed by millions, but are Enduro and Motocross popular sports in Italy? Can you watch them on TV?
“The Motocross World Championships are broadcast live and are becoming increasingly popular. However, because of its complexity, Enduro is not easy to broadcast for a television audience. What I’m very happy about is that for the final of Esanatoglia we had four hours of coverage on two major channels (Nuvolari and Sport Television) that had never before brought so much KTM action into motorcycle enthusiasts’ homes! Do you think we went too far?”

Incredible! Do you think that you have reached the top with this year’s Trophy?
“We have certainly reached an excellent level, but we embrace the philosophy that you can always improve by listening to constructive criticism from those wanting to help you to do better. That is our attitude. For us, that is what READY TO RACE is all about!”