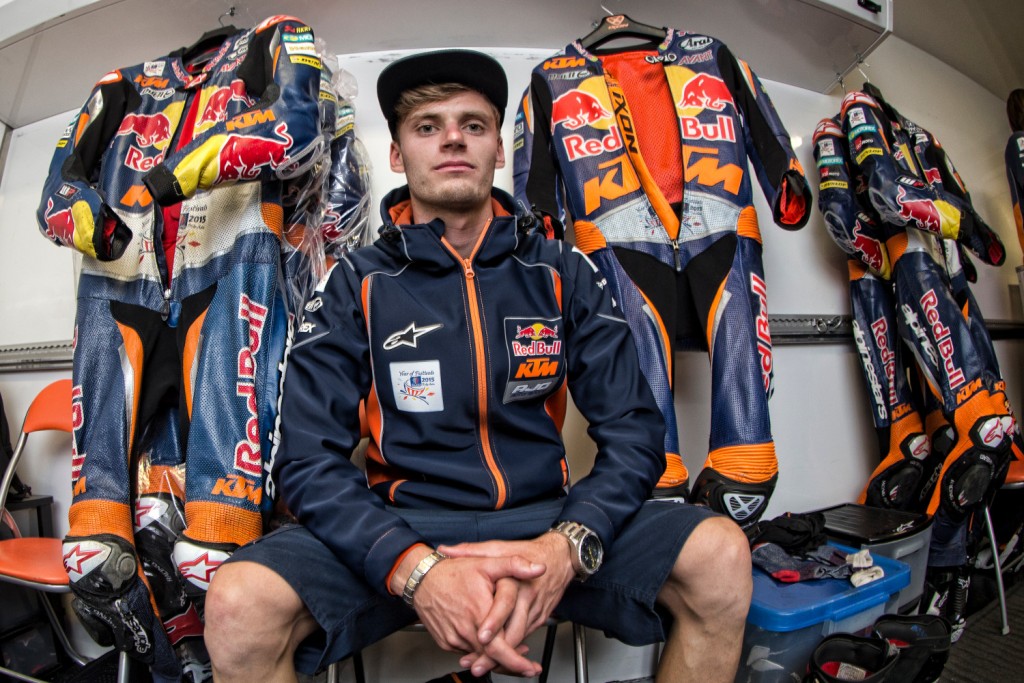 The cut-and-thrust, chop-and-change and general craziness of Moto3 is a tough playground and ‘school’ for MotoGP’s brightest young talents. Podium battles often involving up to ten riders and more are the norm on the pacey 250cc four-stroke motorcycles. How does it feel to be in the middle of it all? And how satisfying is it to emerge from an intense and stressful scrap with the taste of rostrum champagne?

At Valencia and the Ricardo Tormo circuit for the eighteenth and final round of the 2015 Grand Prix campaign we cornered South African Brad Binder for some insight into the core factors needed to burst to the front of the class. The twenty year old from Potchefstroom – who also uses Spain as a training base during the season – has notched four podium finishes on his works Red Bull KTM and has been vying for first position during the flyaways recently with a third at Phillip Island and then second place in the heat of Sepang. 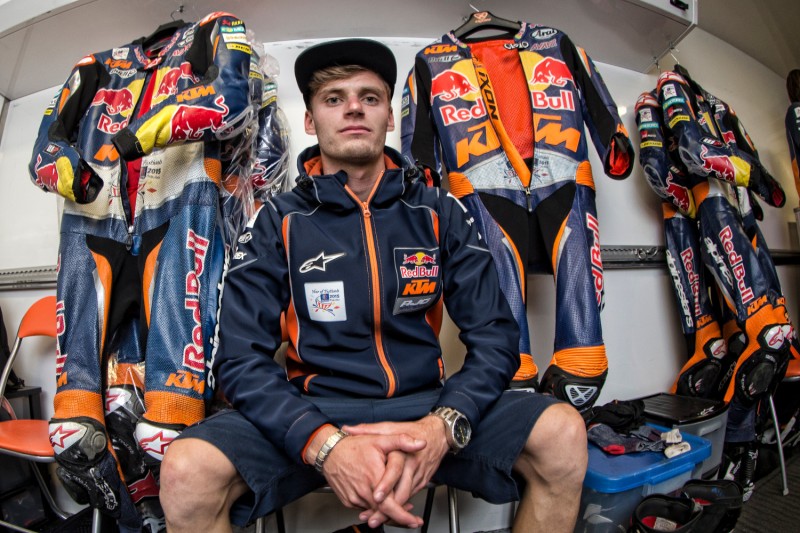 “2015 has been a bit of an up-and-down year for me,” he says from the confines of the small and cramped area that he shares with Karel Hanika in the back of the race truck and with leathers and boots hanging around him. “I expected a lot more and maybe too much. I really battled with the race bike in the beginning but at Misano we had a new chassis and it was magic. It made a massive difference and since then we have been fighting regularly for the podium; I’ve made it three times since we got that chassis. For me its even better that I have another year with the team because I can only get better.” 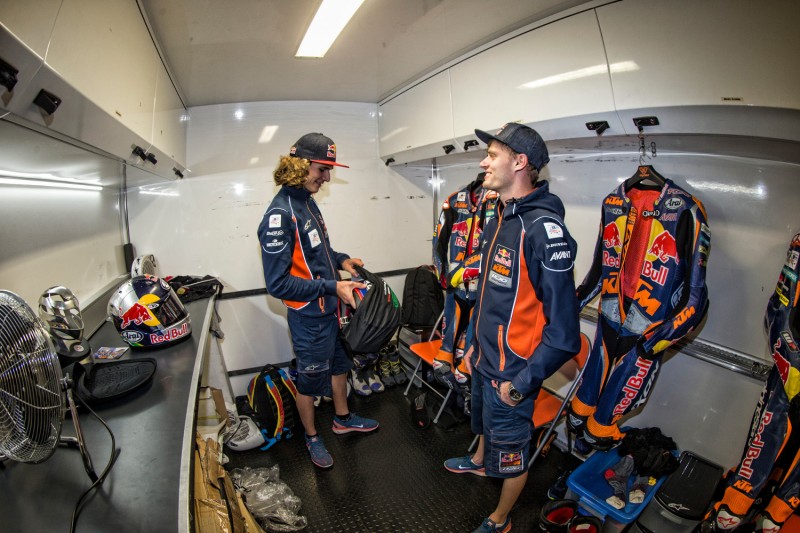 The people in the corner …
Binder has come through the Red Bull MotoGP Rookies Cup program and thus is used to the jostle of a pack of racers in close proximity as well as the nuances of the KTM RC250 GP. Through three full seasons in Grand Prix and with three different machines ‘41’ knows that support off the bike – and for the bike – is key.

“In Moto3 it is so tight that a bike plays a huge part and to have a good team around you really helps,” he says. “You kinda build your own language to be honest. When you speak about chatter or something like that then everybody has their own words for their problems. In the end it means you can understand each other much better and the guys understand right away what they need to do. The more experience we have together then the easier it becomes. The best thing about being in a factory team is that the people are the best. Today [Friday in Valencia] I was 0.2 of a second away from the fastest time and I was in eighth position! You cannot think in 0.2!” 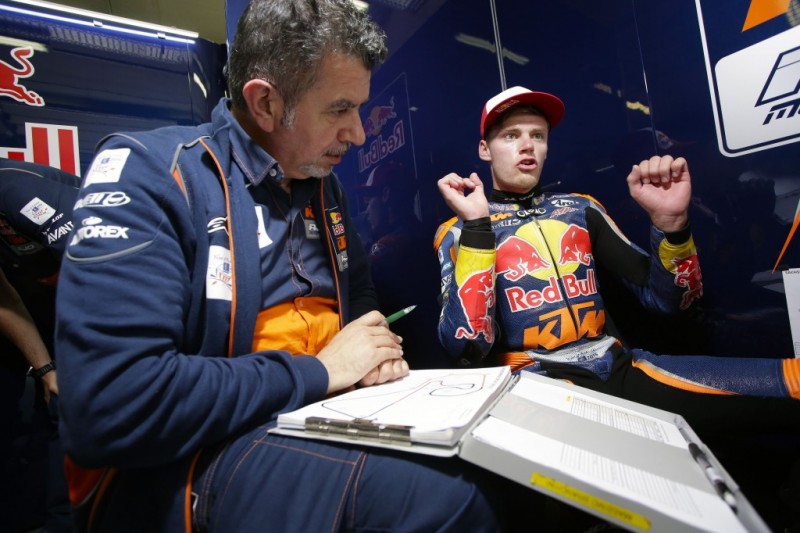 Using your head to be ahead …
Moto3 might look like a swarm of insects and involve relentless position changes where riders have to be watching behind them as much as they do ahead but there is a matter of being ‘calm under fire’ and mapping out an attack, as Binder reveals. “You have to try and be clever. When there are ten of you pushing for the win you have to be aggressive but also smart at the same time. You have to be mature. There is no point going flat out and trying to lead every lap of the race because you are just showing everyone behind you where you are strong and where you are weak and it makes it easier for them to beat you.”

“There is going to be eight to ten guys [together] no matter what you do and it makes it so difficult. If you don’t have a good practice session and you lose 0.3 of a second then you might be starting from fifteenth on the grid; it’s horrible,” he goes on. “When you are racing for fifteenth position you have to be careful around you because the other guys are not so experienced and do some stupid moves. Nearer the front you tend to get the same people always going for the podium and they know what they are doing and its cleaner with less problems. One of the hardest things to learn is to find the good time to ‘go’ and the good time to fight and be aggressive. When there are three laps remaining then you know it is time for business and you just have to go for it.” 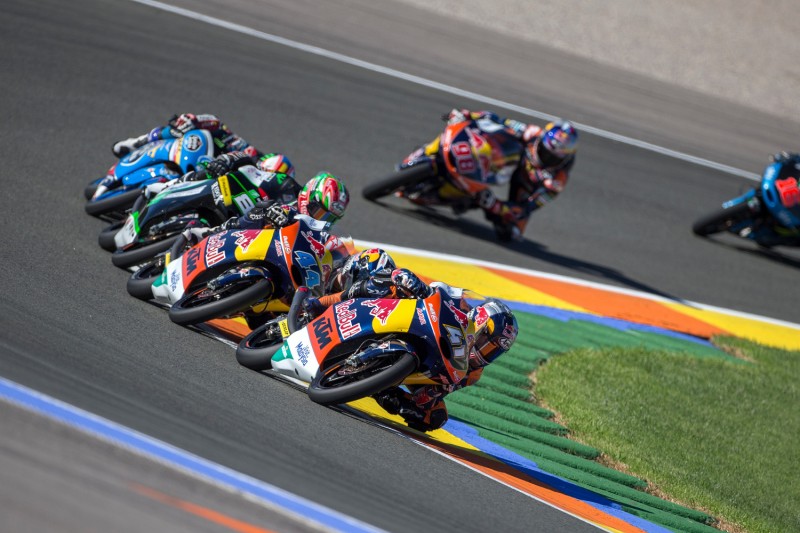 Being aware of who you are and where you are going …
It can be difficult to stand out in MotoGP. The paddock is a colourful, competitive collective of characters, interests and power, and personalities from around the globe aiming for the same targets. Binder knows there are ways and means of putting his name into the limelight and ensuring that he stays at the very highest level of motorcycling racing despite the constant pressure to justify his place. “You get some people that are really ‘out there’ and some that are more chilled; I’m more chilled! I keep more to myself and get on with the job at hand. I’m not here for people to make a fuss about me or to be loud or seen. I’ll let the results speak for themselves: not that it’s happened too much yet!”

A rider’s nationality could also play a part. MotoGP involves eighteen races in thirteen countries and spans a nine-month period. For Binder it means a big commitment away from his native land. “In South Africa it is a different lifestyle and it doesn’t feel like there are many restrictions, so to come to Europe and a place that is so different to be a professional racer, I guess it does make you try harder,” he opines. “You are coming so far to do it that you give that extra 10% if ‘its’ not happening [out on the track].”

“At the end of the day it doesn’t matter how old you are or how many years you have been here the teams want someone who can deliver podiums or wins,” he says hinting at the pressure to do the job. “Now I have decided to stay in Moto3 for one more year because I feel that extra season can really make a difference. I can be a lot stronger and take everything I’ve learnt in 2015 and put it into a good season in 2016.” 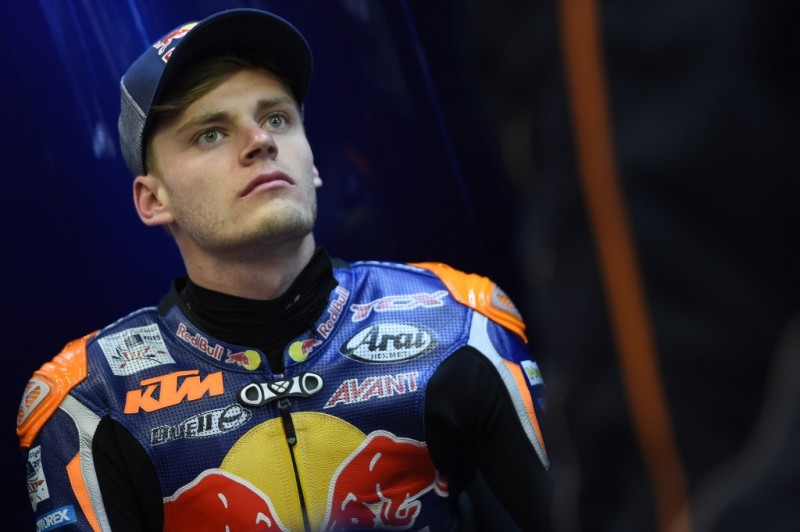