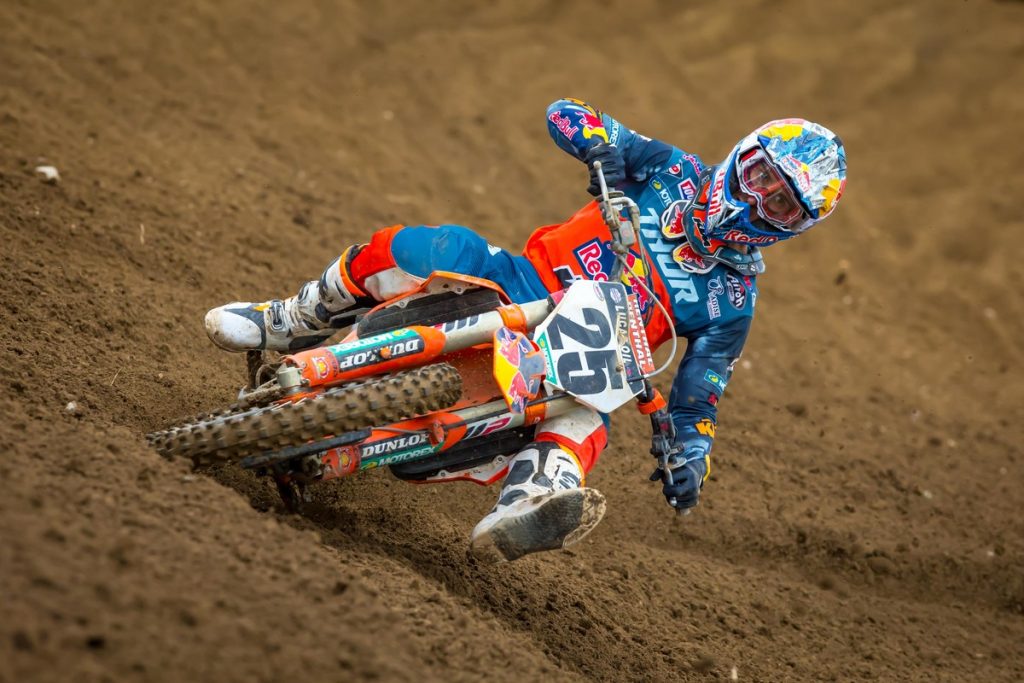 The 2019 AMA Pro National Motocross series is firmly underway in the USA and Red Bull KTM’s Marvin Musquin provides some insight on the technical switch from ‘indoors’ to ‘outdoors’ with his KTM 450 SX-F. 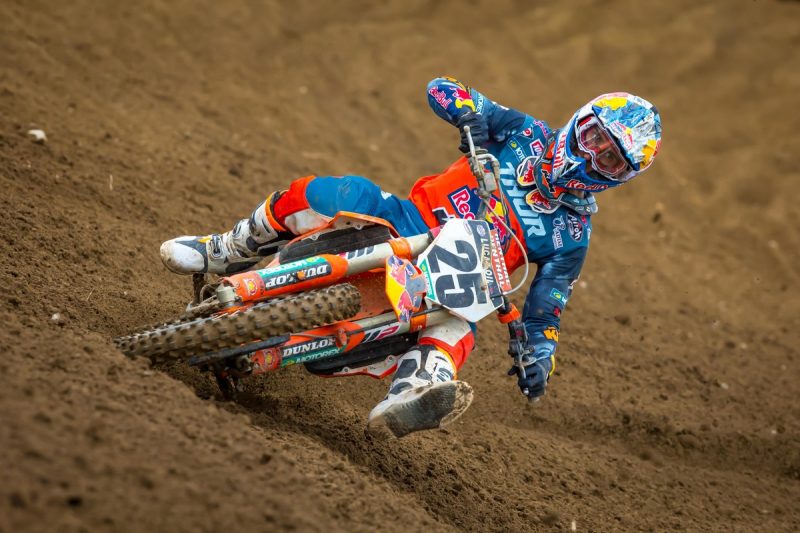 Marvin Musquin, one of the elite athletes in the hectic calendar of Supercross and Motocross dirtbike competition in the USA, is sitting atop his KTM 450 SX-F conducting a TV interview. It is media day at one of the final dates of the rapid-fire 17-rounds-in-18-weeks AMA Supercross campaign. Musquin looks very much at home on the technology he has helped develop and race at the forefront of the highest level of SX/MX for ten years now in Red Bull KTM colors.

At the end of the Supercross season the Frenchman and the rest of the paddock were already thinking of the upcoming Motocross championship that will fill the summer months for twelve further weekends of intense position-swapping.

“It is always a search,” the 29-year-old says (TV duties completed) of the period of adjustment and setup needed to change from the Supercross incarnation of the KTM 450 SX-F to Motocross. “I mean, we always have a base from the previous year and that’s where we start. The plan is to have one day a week riding Motocross towards the end of the Supercross calendar so we are set for Outdoors.”

“We obviously race and ride a lot with the ‘Supercross’ bike which means firmer suspension,” he adds. “That’s the main thing. We are really used to those settings … so when we jump to the Outdoors bike it takes a while to familiarize, especially with the speed of riding a Motocross track.” 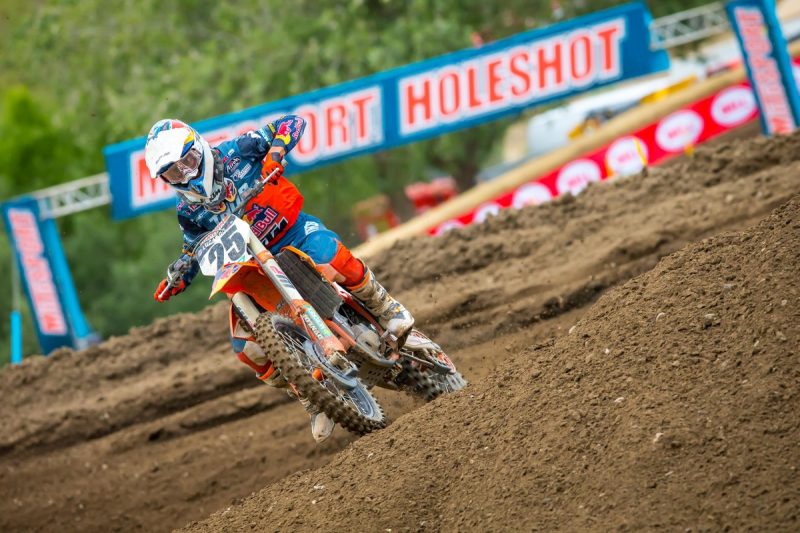 For AMA-centered athletes much of the calendar year revolves around Supercross. The championship itself runs from January to May and, once Motocross is then finished, testing for the following year commences by the end of the summer. The Monster Energy Cup in Las Vegas in Mid-October is almost the equivalent of a ‘pre-season race’ and the whole training, testing and riding prep period builds up to Anaheim 1 and the launch of another term.

Despite the priority for the spectacular stadium-based series, many of the top riders have felt the physics of a Motocross bike since their formative years. “It is like an old pair of shoes?” Marvin grins. “Ha! You could say that! When you jump on it and you check the sag with the guys and the thing moves and you’re not even riding then you know you’re not on a Supercross bike anymore!”

Asked for the main area of variation when it comes to his KTM 450 SX-F then Musquin’s reply is immediate. “The suspension is quite a bit softer. It is a complete change. I don’t believe there is much different about the internals but we always have a few things to try. We can also play with the offset of the bike – with the front end – we can make the bike a bit longer if we want to.”

While Grand Prix benefits from prototype rules the AMA uses firmer regulations locking the race bikes to their production bases. “Compared to MXGP and the world championship we cannot really change the frame,” #25 explains. “We can only play with length and offset, stuff like that.”

“The Motocross and Supercross bikes are not two different animals,” he adds. “They still feel like the same bike but the suspension moves a lot easier in Motocross because it is softer and freer to absorb the bumps. In Supercross we jump so much and you want the suspension to absorb those pockets you land in, and when you hit the whoops. For the power when you are wide open with the bike in Supercross then it feels very similar to what you’ll have in Motocross.” 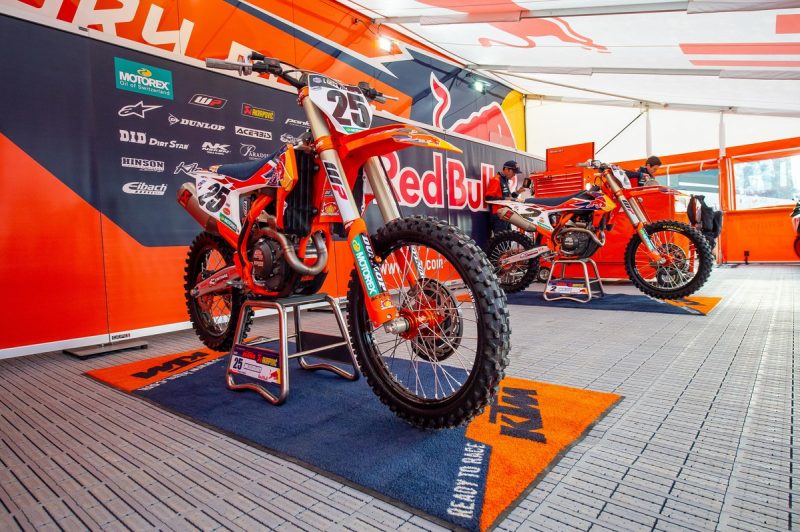 Supercross will normally involve a 30-40 second lap time. In Motocross this is more than doubled. Doubles, triples, rhythm lanes and whoops are exchanged for ruts, bumps and waves, higher speed and more ground time. Finding appropriate tracks to mimic what riders will encounter in the AMA Nationals is also an issue for dialing in those crucial last few clicks.

“In Motocross you always look for comfort with the suspension, but you don’t want to go too soft so that at speed you are bottoming the rear through braking bumps; that can be very dangerous, and it can bite you pretty hard,” Musquin reveals. “We try to practice on decent and rough tracks, but I feel [it’s only] when you arrive to the race that you appreciate how rough it can get. In Europe you know you can go to a place like Lommel [Belgium and one of the toughest sand tracks in the world] on a Wednesday and you’ll find a rough track! Down in California we try to go to a place like Glen Helen – which at the end of the day is bumpy – but it is not as soft and rutty and rough as tracks in the Nationals. In Florida we have tracks that are way more sandy and deeper and we try to ‘build’ some bumps with the dozers to get nearer those race conditions.” 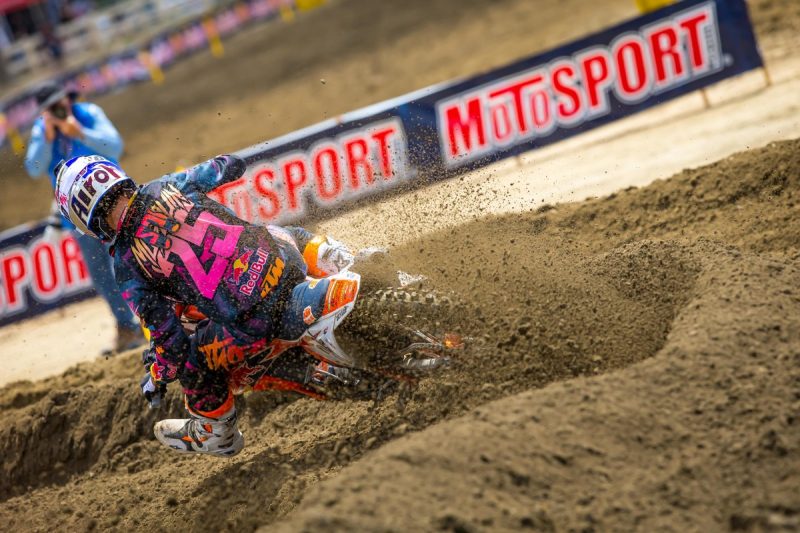 So, Musquin has orientated the handling of the KTM 450 SX-F for Motocross … but that’s not all. “You don’t want a Supercross engine on outdoors tracks!” he stresses. “It is pretty aggressive, and you want longer gearing for Motocross, so then you are changing maps, cams and gearing: there is a big difference there.”

“You don’t want to be going through the gearbox when you are coming out of the turn,” he adds. “I like my bike to run longer in second or third. It makes a big difference and affects the feel and the shock. You get to a certain speed sometimes where you have to close the gas a little bit so the suspension is not moving too much or getting kicked.” 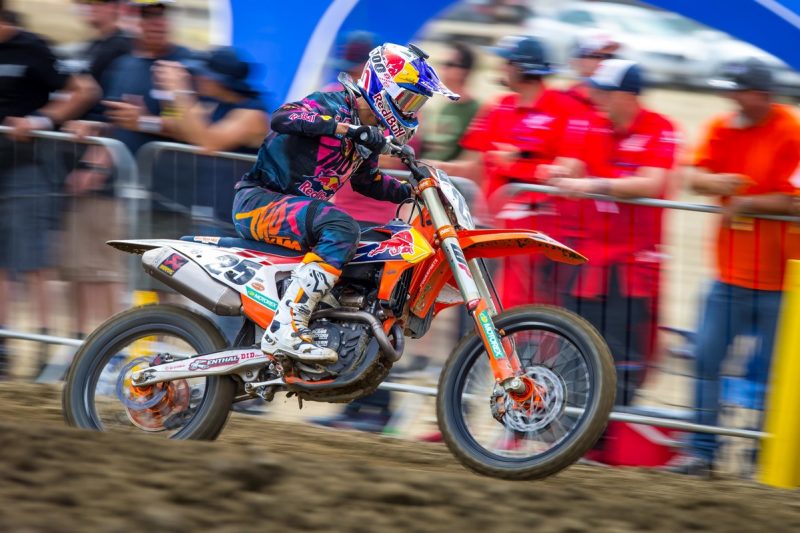 Of KTM’s current roster Musquin is the rider with most knowledge of SX-F machinery, having climbed on the 250 midway through 2009 on the way to his first MX2 world title (Tony Cairoli and Jeffrey Herlings joined Red Bull KTM’s MXGP team for the 2010 season). It gives him a unique perspective on the factory bikes and the optimum configuration for Grand Prix, Supercross and the demands of the Nationals. “Ten years: they have changed!” he says. “Especially the suspension with WP. I rode the 250 in 2009 with the PDS shock … but at Lommel that bike was unbelievable! I won both motos on my 250 and people could not believe it. I had such a good feeling on sand tracks with the PDS. It would be fun to go to Lommel and compare the bikes now and see what exactly I liked about it. I’m so used to the 2018-2019 models.”

Musquin is a race winner both indoors and out. A title contender in both championships as well. A rider known for his amiability as much for his versatility and technical prowess. If he’s made to choose between Supercross and Motocross for a last ever race he breaks into a big smile. “Argh! Very tough question. For feeling of the bike then I’d say Motocross but the feeling in general of just riding would be Supercross because I love the jumps and stuff … but it’s tough! You have the ruts in Motocross and if you have a sick track with great dirt then … arghh! I would pick a giant Supercross track with good dirt and ruts and jumps!” 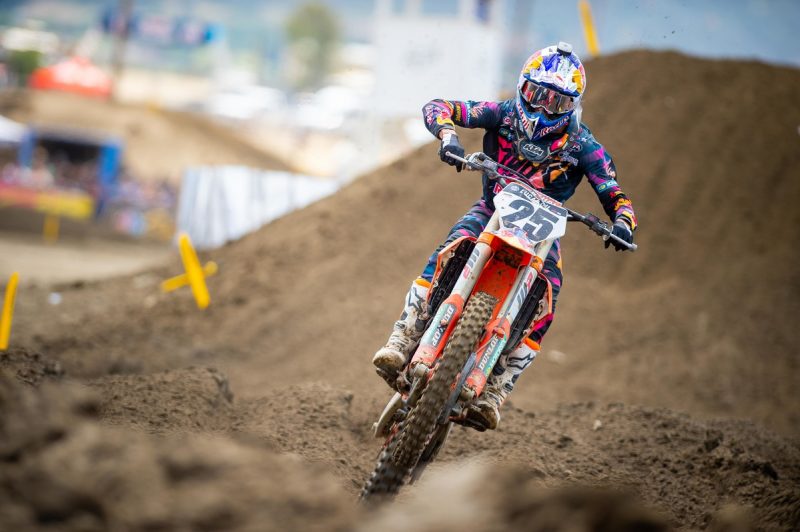 47 Responses to Supercross to Motocross: Ways that Marvin Musquin shape-shifts his KTM 450 SX-F