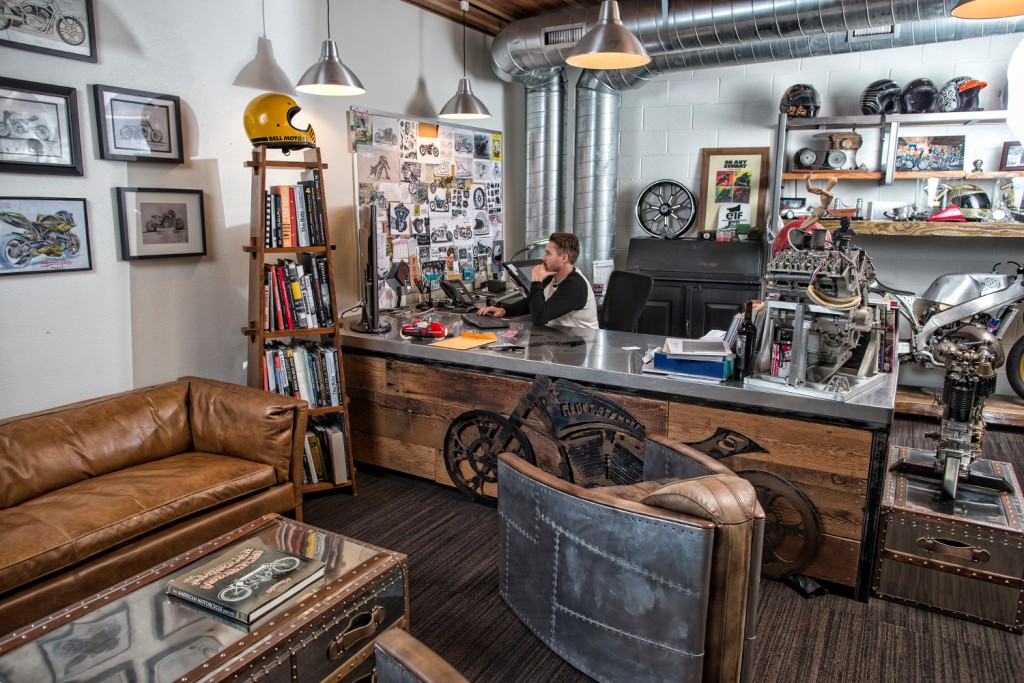 The KTM BLOG makes an exclusive visit to the custom star’s workshop in California for his view on the orange. If you are going to find an alternative take on a motorcycle then there can be few better places than California to explore the custom scene. In the district of Los Alamitos, south of LA, we easily find the nerve center of Roland Sands. The 41 year old has done some remarkable ‘sculpting’ with KTMs – and many other bikes – in the last decade. A swift look at his website shows models such as the fetching KTM 450 (road racer), 690 Cafemoto and Tracker and the RSD Kurt Caselli dedicatory machine and at least six re-imagined KTMs in total. We were keen to hunt the former 250 GP AMA road racing champion down for a talk about his vision and penchant for the orange bikes and although our morning at his cluttered but immaculately ordered workshop/office/store continually involves calls, questions and requests of his time by his busy crew, Roland is amiable, dedicated and good company. 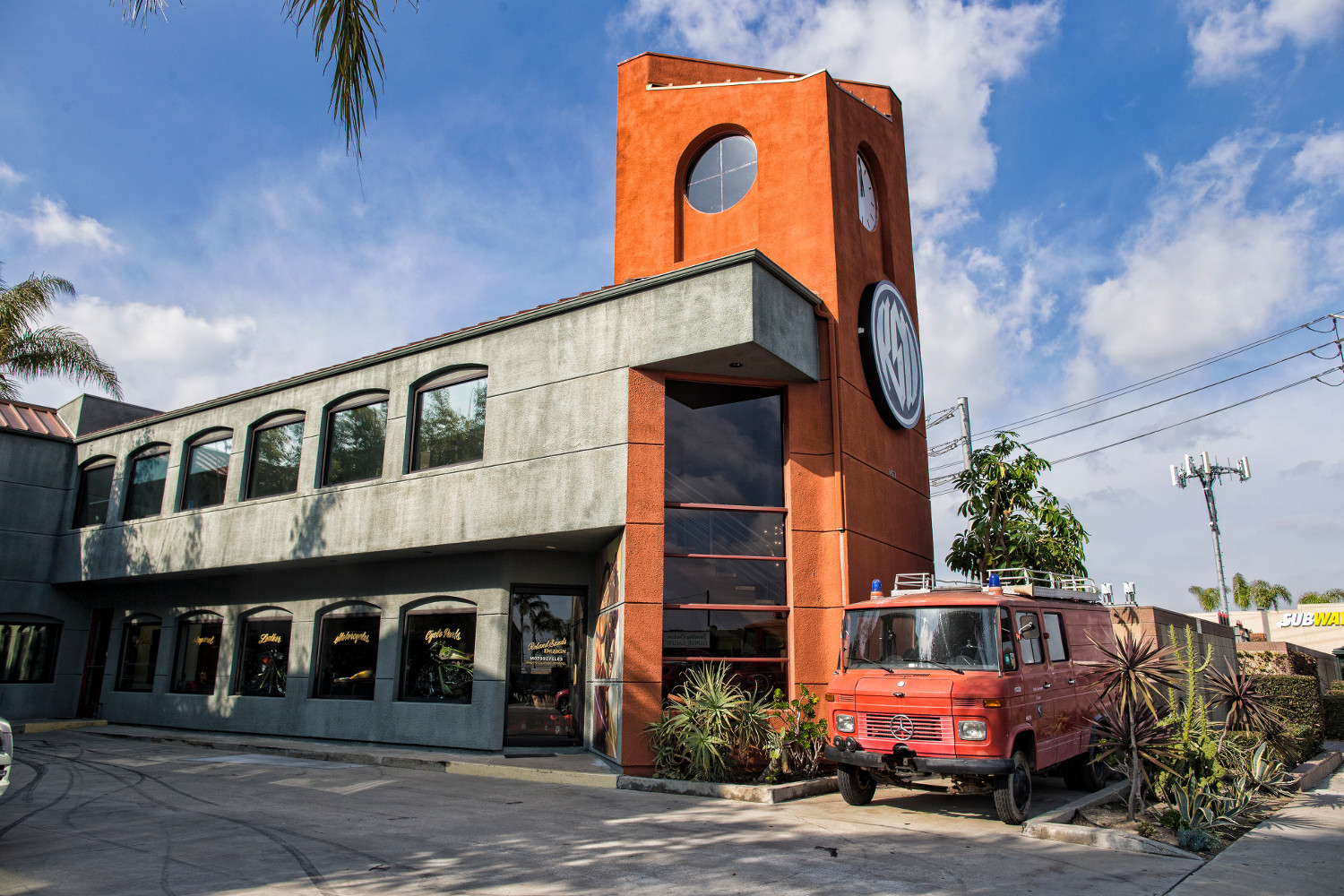 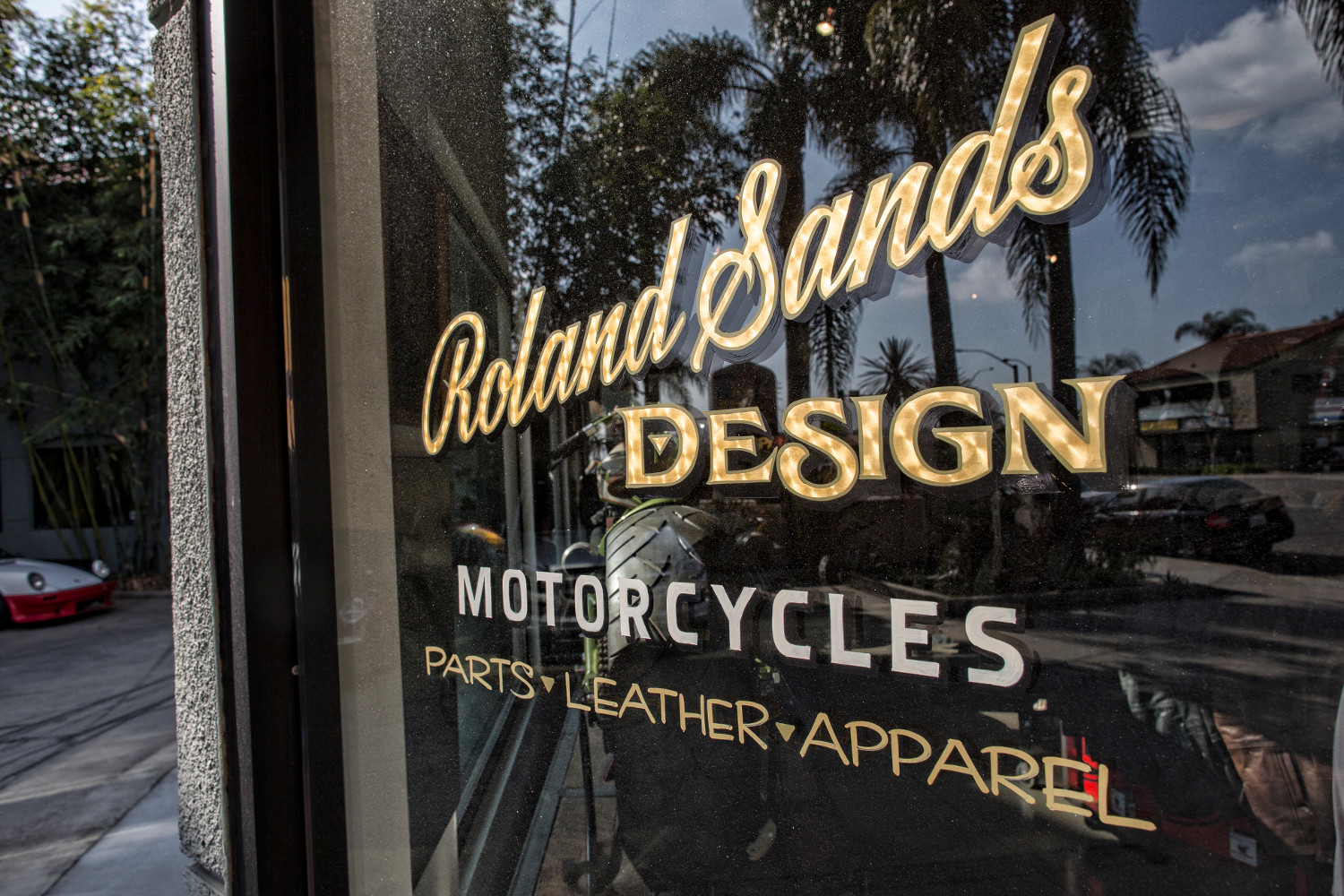 The name ‘Roland Sands’ has become prolific on the custom landscape, gathering attention and press coverage for a perspective on motorcycles that has no boundary for preference. We see European brands, retro dirt trackers and trial bikes, nakeds, cruisers, sport-tourers and dirt bikes all parked around his facility. Affiliations with companies like Bell Helmets, various motorcycle manufacturers and his own branch into apparel and clothing means the business and ‘RSD’ brand is growing after only eleven years of existence, even if Roland has been sketching and designing from an early age as an initial means to support his racing.

“Success is a fickle beast,” he grins at us from behind a large desk and almost hidden by an even bigger monitor. “The better job you do – and I always try to under-promise and over-deliver as a general mentality – then you build a reputation for ‘delivering’; bigger projects come and you’ve expected to do it all.” 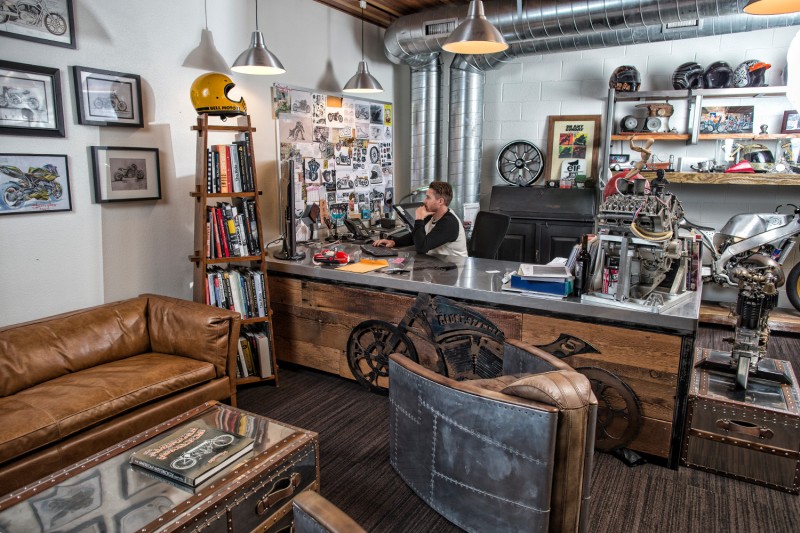 Downstairs a new Diavel is getting ready for a re-working. There are no KTMs on site but there is a smile and flicker of acknowledgment when we want to talk orange and why he was among the first of the high-profile builders in the U.S. to start carving up Mattighofen’s finest.

“For me, KTM is a very pure brand and I liked that they were a bit of an underdog for a while … although I don’t think you can say this about them any more!” he says. “What they have done with the Motocross bikes and then going onto those 690s and very cool, lightweight singles – that I think appeal to younger customers – is super-high quality stuff.”

“I think it is a unique and cool platform for a custom,” he reveals. “I mean the first time I saw the 690 I thought ‘we have to do something with that!’ It is a great street bike that is simple. Actually, the first streetable super-single that we did was a KTM 530; which is one of my personal bikes that I still have. It was a cool project: turning a dirt bike into a café racer/modern street bike. Does it make any sense? To us it does!”

As Roland and his small collective of engineers/creators (we see just two people on the tools while at Los Alamitos) have their hands in the guts of motorcycles from across the board it was curious to get his take on the inner workings of a KTM. “Trying to build a gas tank around that trellis frame can be interesting because it is a little wide but no worse than any aluminum extruded frame,” he opines. “I like the KTM architecture and details like those trellis frames are sexy and translate well into a custom. When you take a KTM apart, take all the bodywork off and strip it down you can really see lines and new ideas. I think you are starting to see a lot more people do KTM customs now and I’m kinda proud that we were among the first guys to make it feasible and popular and maybe inspired other people to build KTMs because they saw what was obvious to us.” 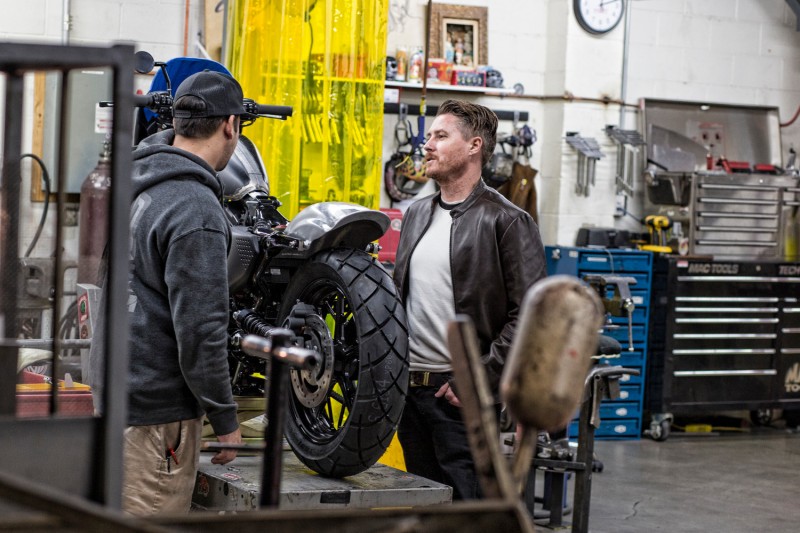 What was so obvious? Why pick an orange bike to re-invent? “As KTM are race-breed a word like ‘sharpness’ or ‘edginess’ comes to my mind,” he muses. “It is something that doesn’t appeal to everybody but definitely to a certain group of riders that want to go out and go fast. It is aggressive. The 1290 SUPER DUKE R is just crazy. It is insane, and so much fun to ride. KTM’s are generally unapologetic in their aggressiveness and I like that.”

“KTM is a racing platform so from a custom point of view our job is just ‘don’t screw it up’!”

As a former racer it doesn’t take much for Sands to appreciate the link between KTM and the track. The ‘450’ is an apt example but there is a sadder (and strangely uplifting) story behind the Caselli build.

“KTM to me has always meant racing and has always had that heritage,” he explains. “I knew quite a few guys who have raced them. [Kurt] Caselli was a friend and somebody for whom we had talked about building a custom DUKE … when he passed away that was such a bummer. We miss him. We had that opportunity to build that vintage dirt bike in his honor with Red Bull with the ‘On Any Sunday’ film and I think that is one of my favorites that we have done because it touched so many cool places. It was a great movie, a cool memory for a friend of ours and a bike that ended-up being very interesting and different.” For Sands it seems that the ‘Caselli RSD’ also taps into some of the essence about custom bike building and changing people’s expectations of a manufacturer or even a potentially a whole segment. “Maybe you can look at it as something that people want from a motorcycle versus modern Motocross bikes that are so aggressive and race-focussed. It was like aesthetically a step ‘backward’ while carrying the technology that is relevant today in the same package. I think the bike took a look at that [mash-up] for people.”

The 450 is unmistakable and is somehow symbolic of the (often unfairly derided) fondness that hardcore American motorcycle racing fans have for the asphalt. “That was part of our super-single project. We took quite a few brands and Motocrossers and converted them. KTM [North America] really wanted to create the thing and I hope it was a bit of inspiration for their RC 390. They were probably already thinking about something like that when we did it but they were the first company that said: “we are going to do this”. They saw that people wanted it and it was an important bike to build. I like that one because it really represents that forward-thinking mentality about where racing can go. It was cool to be involved.” 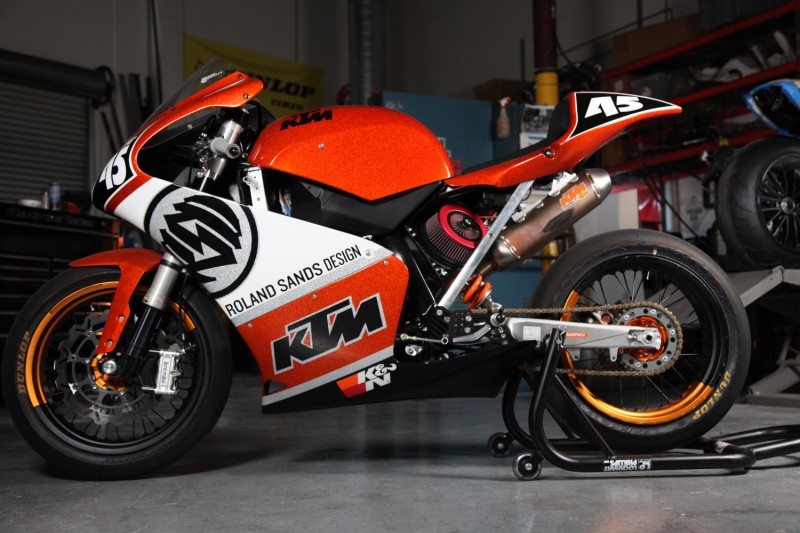 ‘Cool’ is a word that is impossible to detach from the Roland Sands set-up. The Los Alamitos premises mix ambition, technical acumen, fandom, entrepreneurial savy and a deep-rooted fascination with motorcycling, going fast and looking ‘the part’. There is a powerful sense of open-mindedness and versatility to what Sands has been busy creating and it must be part of the reason why his name and efforts are becoming more and more popular. 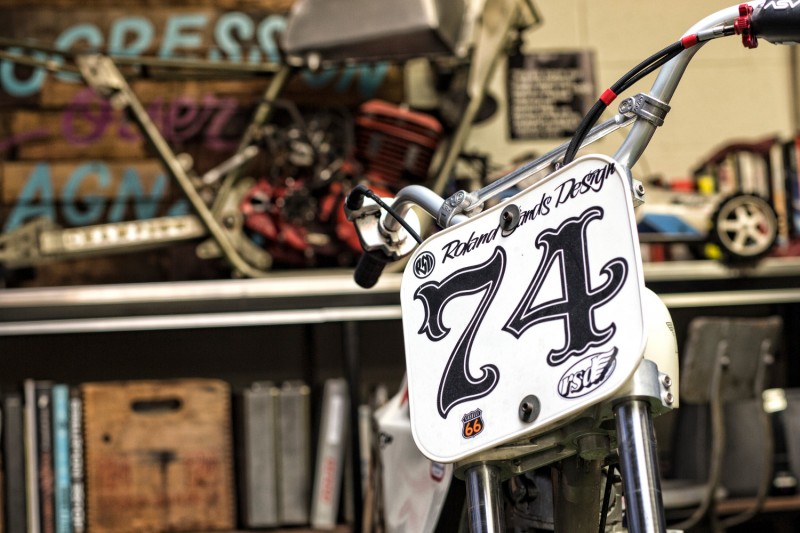