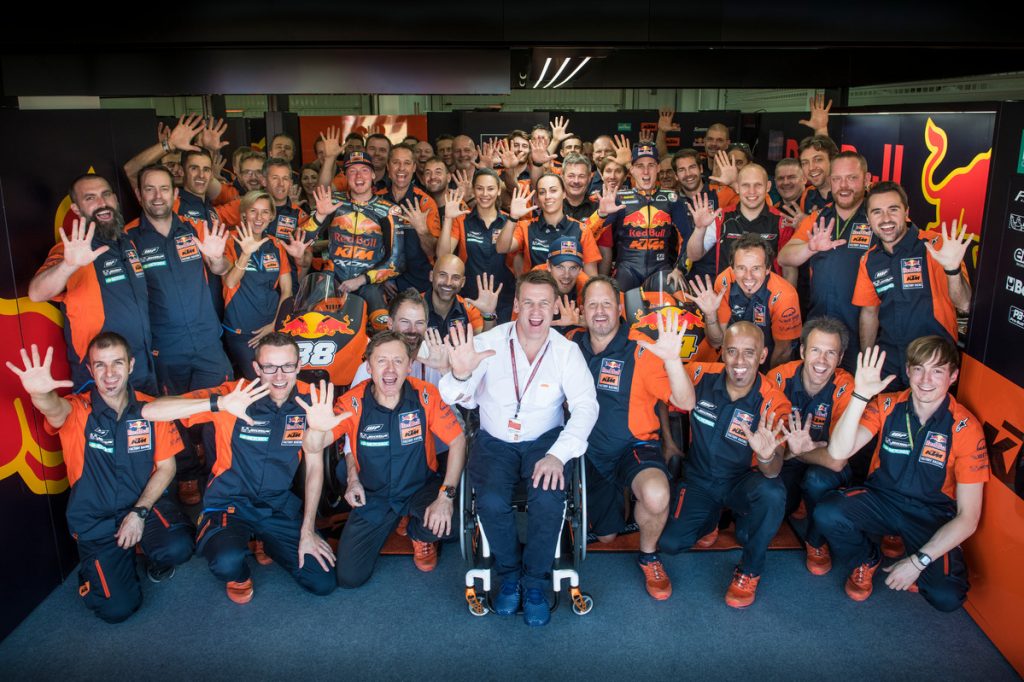 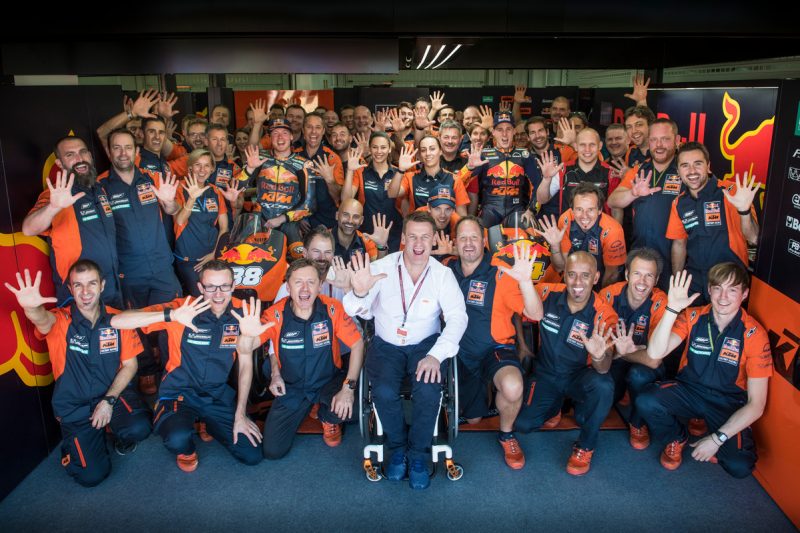 Successes include the first world championship points for the KTM RC16, points for both KTM factory riders, the first top-ten result, and some outstanding performances in qualifying. In the October Grand Prix at Phillip Island, the Red Bull KTM Factory Racing riders managed to land second- and third-place on the starting grid for the very first time, with both finishing the race in the top ten. By now even the doubters couldn’t deny that KTM had become top-class heavyweights in their very first season. It is surely only a matter of time until a KTM rider makes an appearance on the podium for the first time.

Stefan Pierer, KTM CEO, outlined where KTM will go from here: “We at KTM have achieved pretty much everything except a MotoGPTM title, so we’ve still got a score to settle. We don’t prescribe to that Olympic principle that it’s all about taking part and not about winning medals – we want to be up on that podium. And, at the end of the day, we’re still dreaming of a World Championship title.” 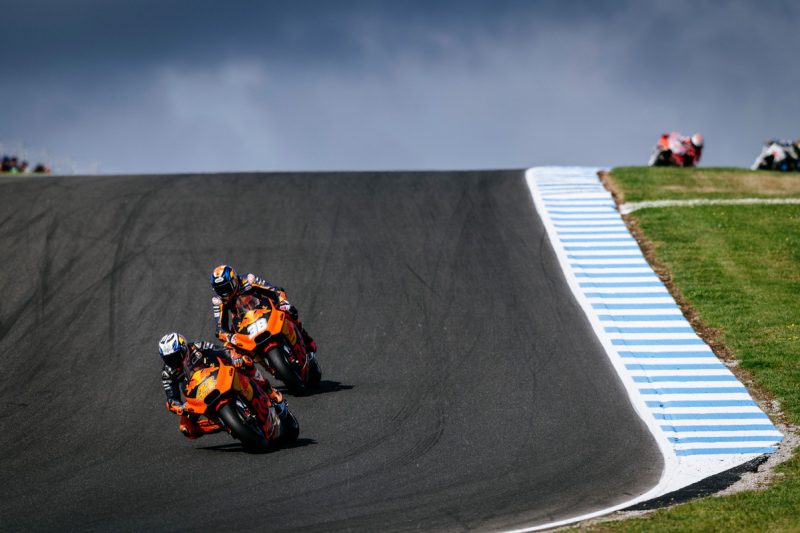 In the spring of 2014, shortly after winning a second Moto3 World Championship title in the 2013 season, KTM announced their entry into the MotoGPTM. Just 15 months later, the roll-out of the KTM RC16 took place on the Red Bull Ring in Styria, Austria. It was a major undertaking for motorsport boss Pit Beirer. Before the project could even get off the ground, he had to fit together a team like pieces in a puzzle, and convince people to come over to KTM. The function test for the new bike – developed completely in-house – ran perfectly smoothly and thus laid the groundwork for what was to come next. In 2016, a further development was announced when it was revealed that test riders Alex Hofmann and Mika Kallio, third-place at the 2008 World Championships on a 250cc 2-stroke KTM, would be joining the team. Things then really started to get serious in the 2017 season, when the two factory riders Pol Espargaró and Bradley Smith were added to the mix.

The Red Bull KTM Factory Racing Team were unveiled to the press for the first time against the grand backdrop of the summer 2016 home Grand Prix on the Red Bull Ring. Stepping out in front of a home crowd was a truly special moment for all concerned. The next major target was the Grand Prix in Valencia, where Mika Kallio was entered as a wildcard rider to test out the KTM RC16 under race conditions, just one year after its launch. After a series of disappointing training sessions, things improved significantly for Kallio in qualifying and he managed to land 20th place. Everyone involved was delighted that KTM didn’t finish at the bottom of the pack. Unfortunately, bad luck on race day meant that Kallio had to retire with a faulty sensor. 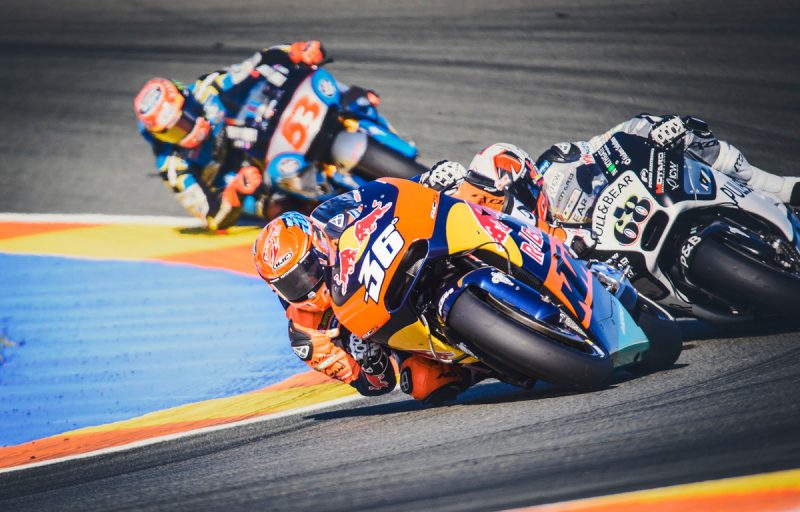 The subsequent test rides showed a clear improvement in training times to become among the quickest. This trend also continued in the 2017 season races, and soon KTM boss Stefan Pierer’s dreams of securing a podium position didn’t seem so crazy.

Motorsport has long been a part of KTM’s proud history. Shortly after commencing motorcycle production, KTM models began taking part in the series machine races that were popular at the time and, exactly six decades ago, KTM’s first racing bike – constructed by Ludwig Apfelbeck and featuring a 125cc 4-stroke engine – was launched. At the end of the 1950s, due to a crisis on the European motorcycle market, KTM discontinued its motorcycle production and it wasn’t until 2003 that KTM riders could be found back on the track and fighting for victories and championship titles.

On its 50th anniversary, KTM entered the world of Grand Prix sport with the 125 FRR, followed two years later by the 250cc class. In 2005, KTM won the Constructors’ World Championship in the 125cc class. That’s when KTM first sampled the waters of MotoGPTM, working as the engine supplier for the Kenny Roberts’ Proton Team, which, despite the performance of an almost 240-hp V4 KTM engine, did not manage to score any world championship points. After this, the FIM announced their plan to ban 2-stroke machines from Grand Prix sport, thus ending KTM’s factory-based involvement in 2009. It continued to develop young talent of the highest level, however, with the Red Bull MotoGP Rookies Cup. So when, in 2012, the new Moto3 class was launched, KTM were able to present their new 4-stroke bike, the KTM RC 250 GP, which was a real contender straight out of the gate, picking up the first two titles in this new class through Sandro Cortese and Maverick Viñales. Many current MotoGPTM stars experienced their first victories on the125cc 2-stroke KTM, but were forced to switch manufacturers once they switched to a different class. But that shouldn’t be an issue anymore. “KTM wants to keep its riders in the family,” says Pit Beirer. KTM wants Moto2 to be a platform where young riders can continue to work with KTM in the smaller classes too. “Even we never dreamed that we would come through the first Moto2 season in such a strong position with three consecutive victories. We won’t be letting Miguel Oliveira and Brad Binder, the two Ajo Team riders, out of our sights and we will definitely be seeing them again in the MotoGPTM on a Red Bull Factory Racing KTM.” 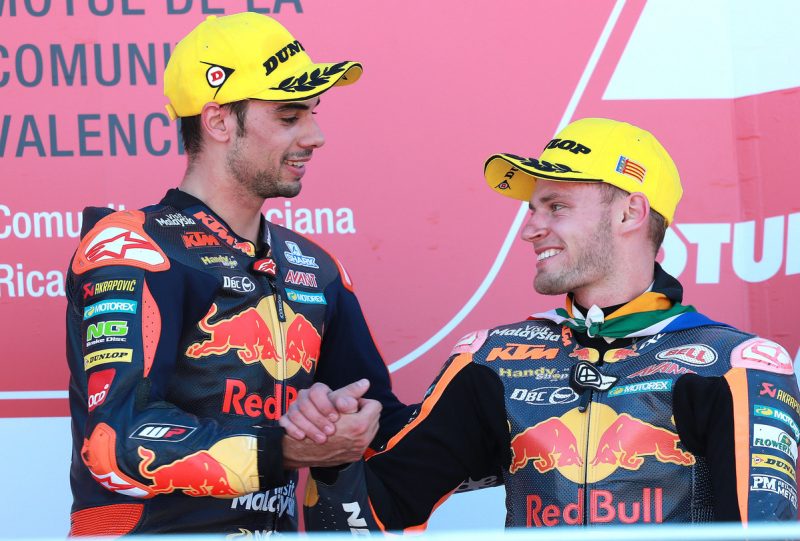 50 Responses to #inthisyear2017: A look back at the first KTM MotoGP™ season