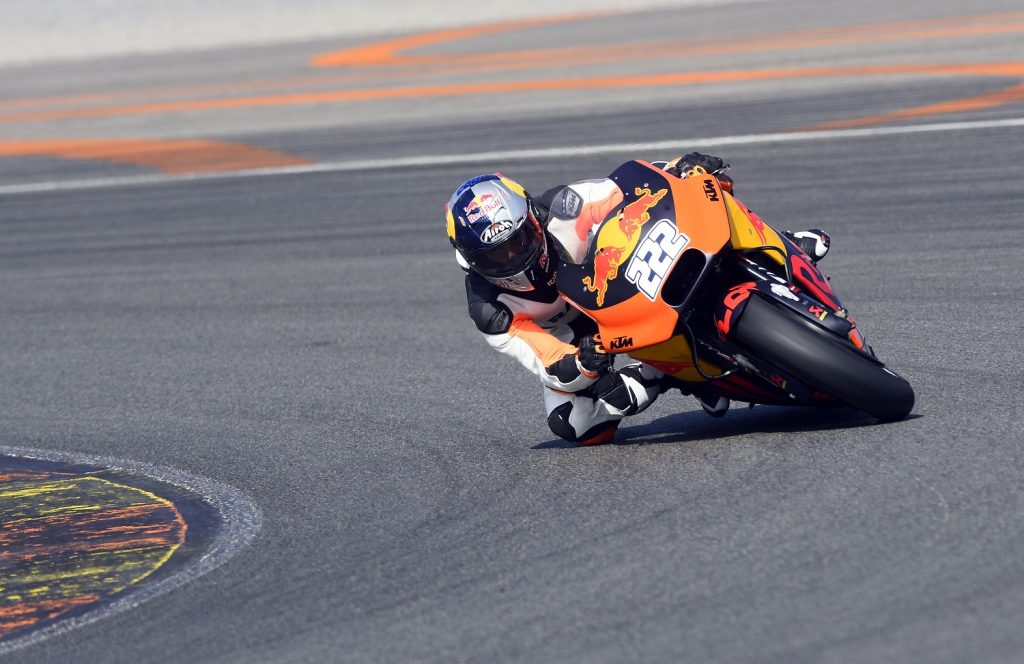 Could one of the greatest motocrossers ever be eying a career change? Tony Cairoli’s appetite and curiosity to try a new MotoGPTM machine was satisfied in the middle of October in Valencia. We’ve seen the images so now hear what the Sicilian had to say on his KTM RC16 debut. 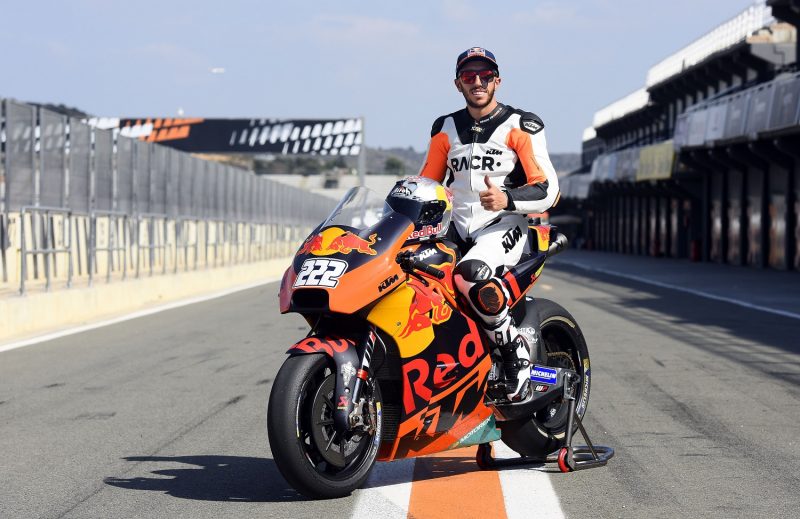 The last weeks said a lot about MXGP World Champion Tony Cairoli. First he celebrated his wedding to Jill with family and friends and only a month after he’d won his ninth FIM crown. A few days later he’d delayed his honeymoon to quell the urge to run some laps on a MotoGPTM machine and joined the Red Bull KTM test team on a sunny day of work at the Ricardo Tormo circuit in Valencia. Good people, good times.

It was unusual to see the experienced 32-year-old looking slightly pensive in a race paddock. The unfamiliar full face Airoh helmet and leather suit was the first indication that this was a different examination of #222’s speed. There was then the howl of engine power and detailed briefing with the crew that are playing an important back-up role in what is a historic maiden term for the factory on the MotoGPTM grid. Cairoli even spent a few moments getting words of advice from official test rider Mika Kallio for what to expect from the fierce KTM RC16, compared to the torquey blast of his KTM 450 SX-F. 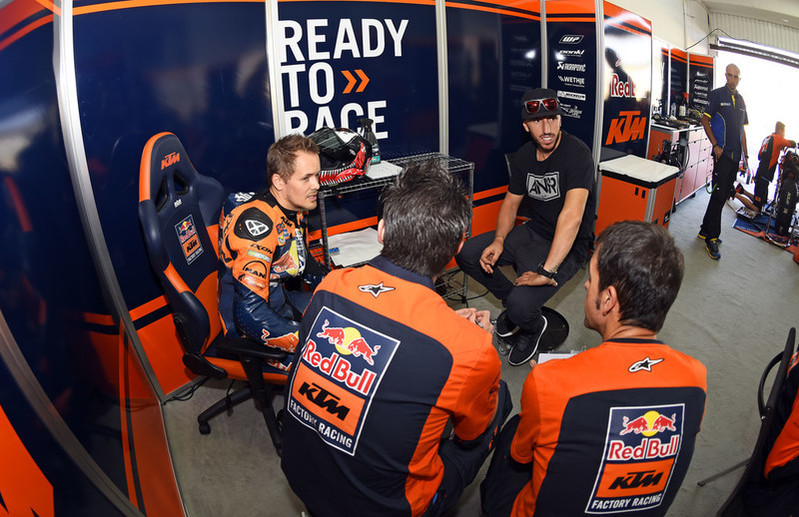 Soon Cairoli’s ‘222’ machine was deprived of tire warmers and pushed into life. Tony got faster, more comfortable and more ‘cranked over’ as the test went on and he notched 22 laps.

“The first impressive thing is the braking and the big acceleration; it is very tricky to find the limit of a bike that feels so perfect and balanced,” he said. “The grip in the corners is amazing. It is ten years since I last tried a MotoGPTM bike and there is a huge improvement with the bike and corner speed. I only did a few laps but had a good feeling by the end and felt I could push more.”

“The reversed gearbox was another tricky thing in the first laps when I made a few mistakes but it was quite easy to adapt,” he added. “Luckily Mika was there and has so much experience. He gave me some helpful advice and I could follow him to find the right lines and correct some of the mistakes of the beginning: thanks Mika!” 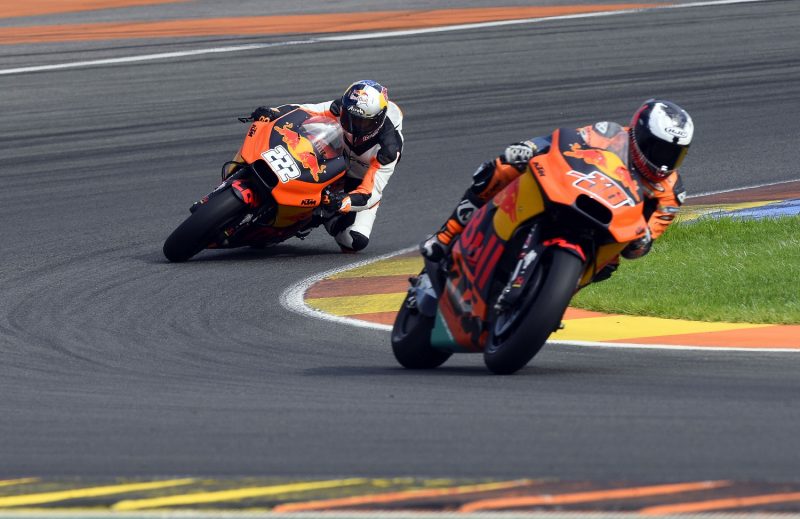 “I was excited to come here but I didn’t get time to do more laps, which was a shame so I hope next time I can do more and try to get near the limit,” TC said. “It was such an adrenaline rush to ride at more than 300 km/h. We are not used to this speed. It was amazing.”

Cairoli was also afforded the chance to compare his discipline with that of the asphalt. “Obviously you are stuck to one line and you don’t have the freedom to change like we do to have a better feeling,” he offered. “You just have to follow the best line and try to do everything perfectly.”

“A big thanks to KTM and the test team for the opportunity and I hope I can go again. I like new challenges and to approach different things. It was the first time for me to get 59 degrees and my elbow on the ground!” 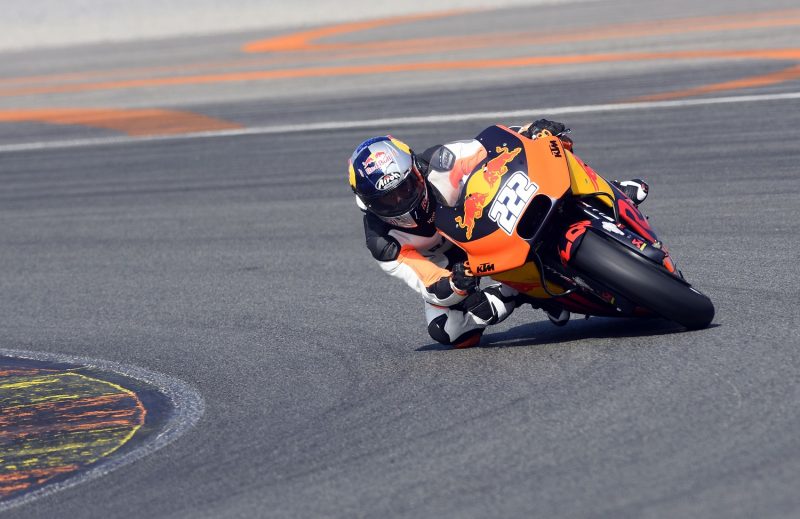 Although there was little danger of roost or visibility problems, Tony still had to deal with the phenomenal speed of another type of KTM. His touchpoint with the KTM RC16 was actually a fitting story considering the success and prominence he gave to the then pioneering KTM 350 SX-F with five MXGP titles between 2004-2010. Cairoli still rules his sport into his thirties and, like another famous Italian, shows no signs of slacking off the cable.