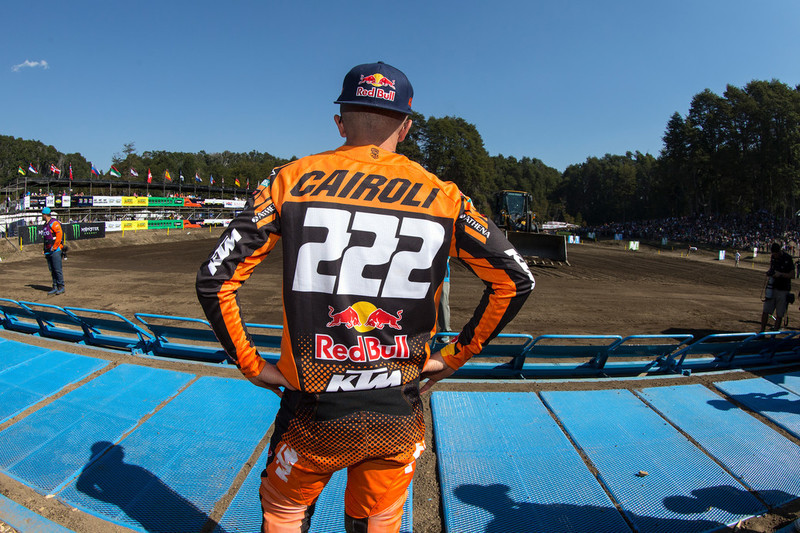 The Great One: Tony Cairoli

There are not many motorcycle racers competing at the highest level with nine FIM World Championships to their name – just two in fact – and Red Bull KTM’s Tony Cairoli is one of them. What possessed the man to seek more silverware at 31 years of age? Will he reach that mythical ten? And how will he deal with a super-competitive teammate in 2018? 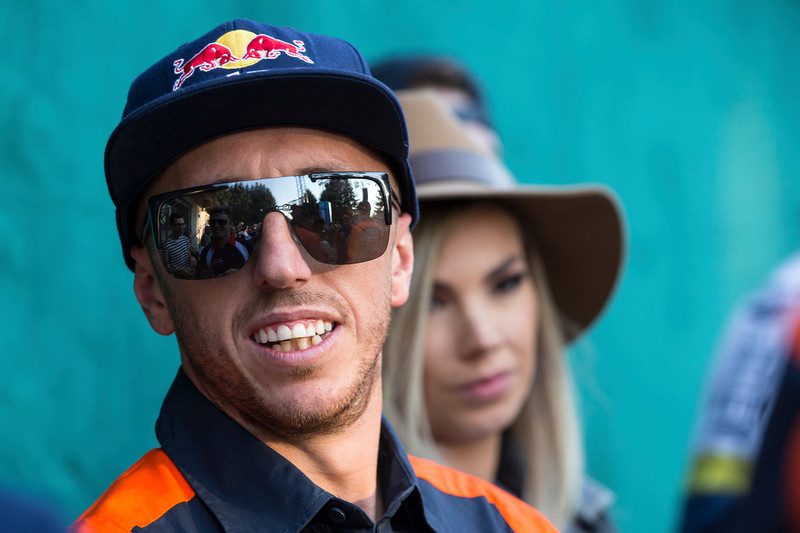 It will be hard to find a motocross fan that will contest Tony Cairoli’s claim to greatness. There might have been a few, however, that wondered if they would see the Sicilian back in the kind of form that snared six consecutive premier class world titles between 2009-2014. Entering 2017 Cairoli was bubbling after two years of injury frustration (although he still finished as MXGP runner-up while dealing with nerve damage in his back and shoulder) and the influx of riders like Romain Febvre, Tim Gajser and Red Bull KTM teammate Jeffrey Herlings; all almost ten years younger than the venerable #222.

Cairoli not only pushed the naysayers away from the fences but did so with some inspirational performances. The comeback from almost last place to win the second moto at round five in Arco di Trento and the excellence in the frying Ottobiano sand for the eleventh Grand Prix of the year are just two instances that come to mind to illustrate that Tony was better, craftier and faster than ever. 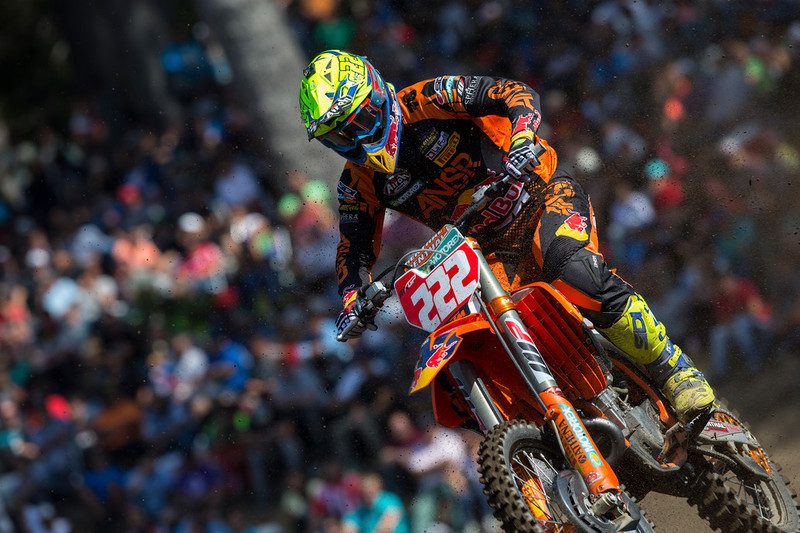 As is the case with any sporting ‘giant’ it would have been foolish to dismiss Cairoli’s chances. His skill set in all terrains and race circumstances and sheer depth of experience of a full-time GP career stretching back to 2004 meant his potential was still far too rich. Fit, energized and comfortable on the KTM 450 SX-F after a clear winter period of testing, Cairoli roared back to prominence with twelve podiums and six Grand Prix wins from the nineteen rounds of 2017.

“He is motivated and he has fun and that is the most important thing. He always wants to be better and better and this is the secret,” revealed Team Manager David De Carli when asked why Cairoli still has the urge to work and take risks to be at the peak of the sport. Many observers – and even the riders themselves – commented on the demands and stressful competitiveness of MXGP this year. It would take something special to rule the roost and Tony made it happen. 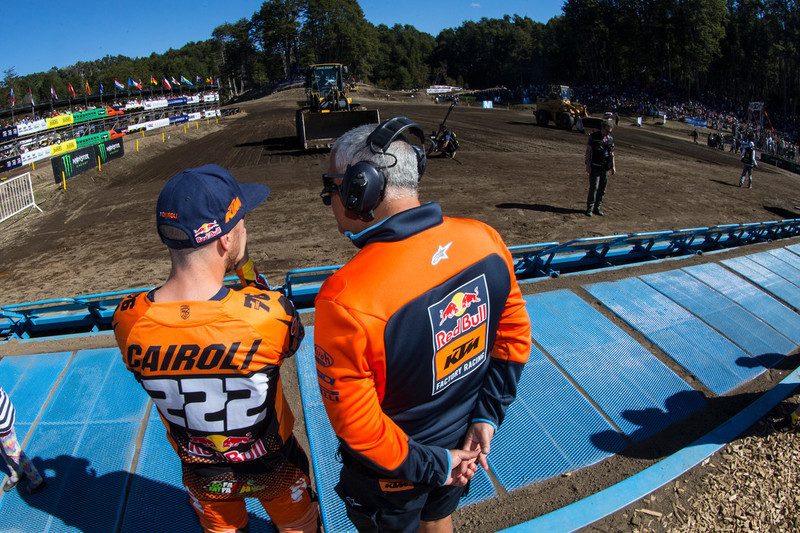 Having known and spoken regularly to arguably the best offroad racer in the modern era (and he’s in some very special company) for over ten years I have to back-up De Carli’s statement. Cairoli – like another famous Italian in MotoGPTM – does not have to race or doesn’t harbor some desperate career goal out of reach (he is already the second most successful motocrosser ever). He searches the limit out of desire, a love for riding, competition and all aspects of being a top-flight athlete. Cairoli does not shy away from aspects of his job and his lifestyle. He can easily be found in the paddock or the race team and is not locked in his motorhome anxiously waiting for the moments of a Grand Prix weekend that involves firing a button on the KTM 450 SX-F. He embraces being a leader, a champion and, being one of the best at what he does, hitting 32 he’s still not ready to walk away from it, or back off.

“There is not much you can do about age but I think that at 29-30 you are still capable of a good level however the two injuries ‘stopped’ me for two years and I couldn’t work like I wanted,” he said to me at Assen and the Dutch Grand Prix where he reached a new milestone. “I rode less. I trained less. In one way it was good because it gave me more motivation. It is like 2017 ‘saved’ those last two wasted years for me.”

“I didn’t know if I could get over that problem from 2016,” he reflected. “I didn’t really know the extent of the problem. I knew I had snapped a nerve and the doctor said I had to adapt and I might get some strength back but it would never be completely healed. I said: “Ok …” and thought I might have to ride like that for the rest of my life. I kept on going to the gym, kept on doing physio and it slowly got better and better. In the winter I was feeling good and was training more like normal and feeling more relaxed on the bike and with more power. In the end it was good and the winter went well.”

“You know, after you win a title you always think back,” he adds. “It is also a strong point because it means you know how to adapt to a situation and every year you have to work around your rivals and contenders and we have done that well. The winter has always been about trying to improve one area that we felt we were missing the previous season. And, like that, you always grow.” 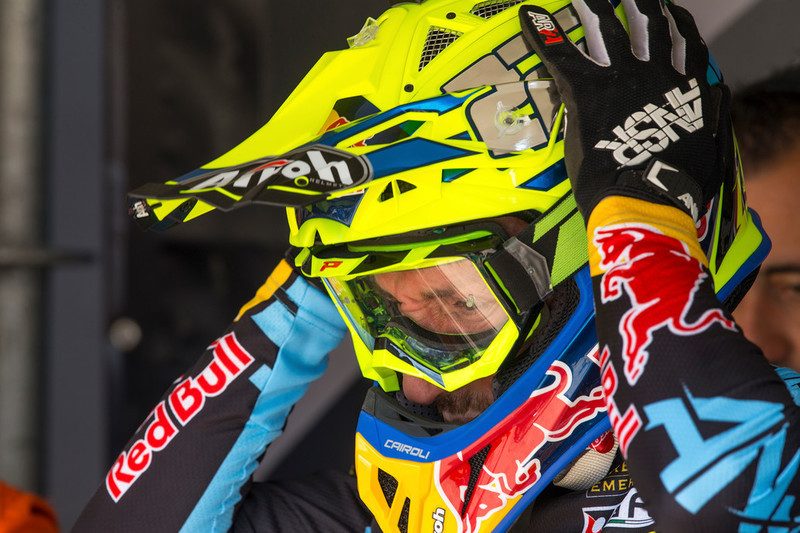 Cairoli is up to nine titles, seven in MXGP and two in MX2. He is within distance of Stefan Everts’ previously ‘untouchable’ haul of ten and a season or two of the 101 Grand Prix win total. This week he gets married and will even indulge in a test of the Red Bull KTM MotoGP bike at Valencia in the coming days. He claims not to be driven by numbers but 2018 represents the chance to put his name at the top of the record books. Another motivating force will be the presence of a hungry Herlings, who won five of the last six rounds of MXGP and clearly gave Cairoli food for thought.

“Yeah, I’m already looking forward to that,” he says. “When you are riding for the championship it is very difficult to keep the strength and train every week. At the beginning and the middle of the season you push your hardest in training to gain as many points as possible at the weekend and then when you make a gap it becomes risky to train too much on the bike or even the bicycle. So while you are slowing down a bit and avoiding more risk there is a competitor who is flying at 110% because he wants to earn points and win.”

“He [Jeffrey] was pushing for GP wins and bonuses and I know about that because last year I was riding badly but still going all-or-nothing every other weekend. I didn’t have a good speed or condition but I still won some GPs because I went for it without thinking. Jeffrey is a big talent. Very fast. I don’t think his technique is one of the best but he puts in so much work on the bike. He is very strong the whole moto and has a lot of power. He rides more on his strength and energy than technique; I like riders who use their technique and who are cleaner with that but everyone has his own style. I’m also different [to him] with my mentality. I have never said ‘I am the best try to beat me’. I have just tried to show it through my career.” 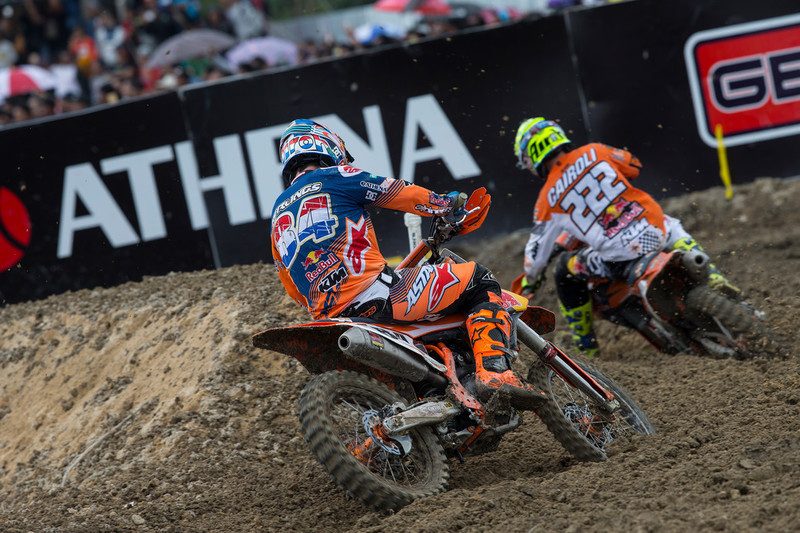 It is typical of racing and sport that the next challenge immediately follows a previous achievement. Cairoli returned to the top in 2017 but will have to arguably improve again to rule once more in 2018 (there’s the motivator). Regardless of what happens now #222 must be aware of the legacy he is creating. What would a fifteen year old Cairoli – based in Sicily and just a few months before he left for the mainland to chase his ambitions – have said to the statement that he would eventually be lauded as one of the best of all-time?

“Ha, for sure when I was a kid then I was not so good, and it was because I didn’t have anybody to compare [myself] with. I wasn’t like [Ken] Roczen or Herlings who were born close to the ‘capital’ of motocross and had the chance to see many good riders and just by watching others you can grow a lot. I was in Sicily until I was almost sixteen and the only person who I could see was better than me was my cousin, who was doing local races. I learnt from him and watched DVDs of American races but didn’t see a GP until I got onto a 125. It was very difficult because I didn’t know if I had the talent or not until I reached the De Carli team and I was eighteen. It was pretty late. If I had been born in Holland or Belgium then I would have had more skills earlier. It’s OK. I have really enjoyed my career and I regret nothing. About the best? Ha, for sure I would have said ‘no way’. I was top five in the Italian championship but I was nothing special. I wouldn’t have believed you.”

Belief in Tony Cairoli certainly isn’t a problem any more. 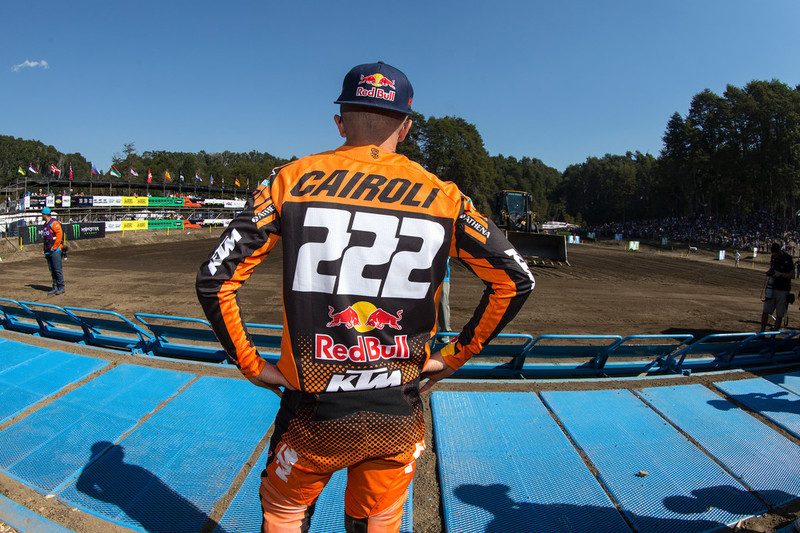 50 Responses to The Great One: Tony Cairoli