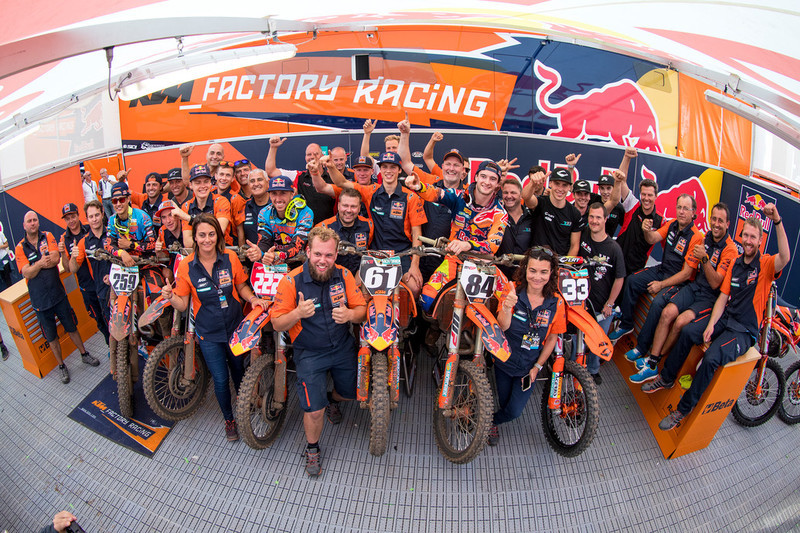 The ‘stars’ behind the stars: MXGP race team

Racers regularly credit the team for their achievements and in 2017 the Red Bull KTM Factory Racing crew in MXGP has been chiming in sixth gear by leading both MX2 and MXGP categories all season. We journeyed behind the scenes to find out a bit more about the other ‘cogs’ of the machine that are making it all happen on the track. 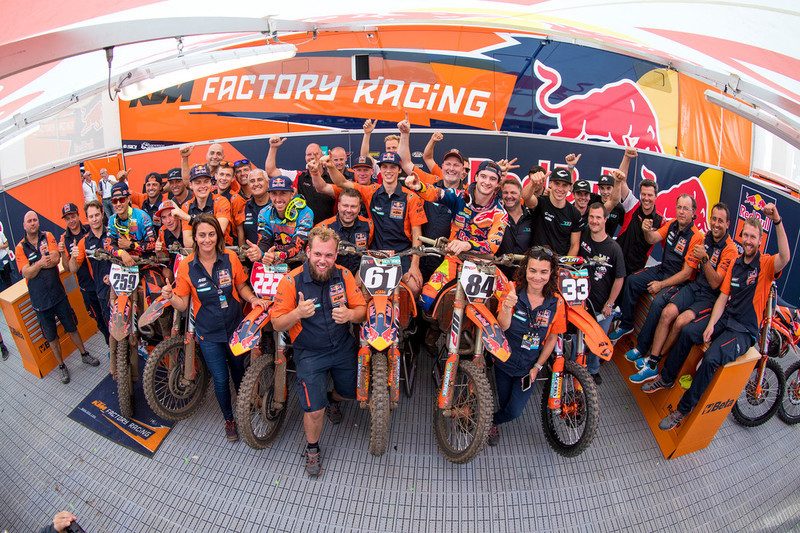 There is a long corridor that runs behind the panels of the Red Bull KTM truck and trailer, a gap between the vehicles and the work areas. At any one stage of a Grand Prix and meeting of the FIM Motocross World Championship this narrow passage is crossed by mechanics, riders entering their private changing area, team guests, and management talking and making decisions. The grey flooring and white awning roof mean it is a bright if slightly imposing place.

If the dirt, sand and soil of racetracks are the stages for the likes of Tony Cairoli, Jeffrey Herlings, Glenn Coldenhoff, Pauls Jonass and Jorge Prado to produce their best performances then this hub of the racing operation back in the paddock is the thoroughfare for the 14-15 people that make up the technical staff roster and logistics that keep the whole show spinning at a crucial time.

Imagine all the demands on a squad leading both divisions of an FIM World Championship and winning Grands Prix, even to the point where all five athletes appeared on the podium (as was the case at the Belgian round in Lommel). Press, sponsors, technical partners, VIPs, families, friends, even fans: there are as many scenarios and meetings and pressure from the moment a circuit opens as the riders themselves have to cope with in the MXGP motos. 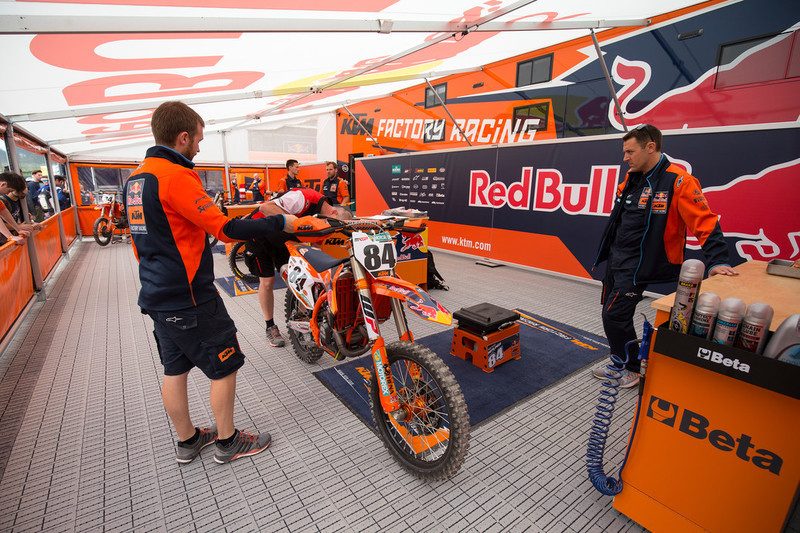 Among the group that are busy and focused over the 72 hours of an MXGP fixture (of which there are nineteen in a season as well as the flagship annual Motocross of Nations) and answer to MXGP and MX2 Team Managers Claudio di Carli and Dirk Gruebel are personnel like Robert Gregor, a 39 year old from Slovakia who has been in charge of logistics for the last seven years and Valentina Ragni, Team Coordinator for fourteen seasons.

“KTM is like my second family,” Ragni says. “Travelling and moving a race team around can be stressful and worrying but we have such a great atmosphere that you tend to forget that quickly once you are on the way. There is a lot of respect amongst all the MXGP and MX2 boys, and a lot of harmony. We joke and laugh a lot and socialize and that is even more enjoyable on the flyaways. It is one of the best parts.”

Gregor drives the truck, maintains the race setup and helps the rest of the crew build and dismantle the distinctive structure. When in the workshop back in Austria the new father of two is assisting with the preparation of crates and freight. “We do around 25-30,000 km a season depending on the calendar,” he reveals. “You need to be really focused and careful behind the wheel and you’re driving nine-ten hours a day max with your breaks. We can do 2000 kms between races, like going from Italy to Portugal, and it will take three days to get there.”

“Sometimes it is hard but it is a nice job and it is good to have been part of the team for such a long time; I’ve been in motocross for fourteen years in total but I was really happy to switch to KTM because this is the best level in the paddock: a very good bike, very popular team and it’s nice to work with people that come from a variety of countries,” he adds. 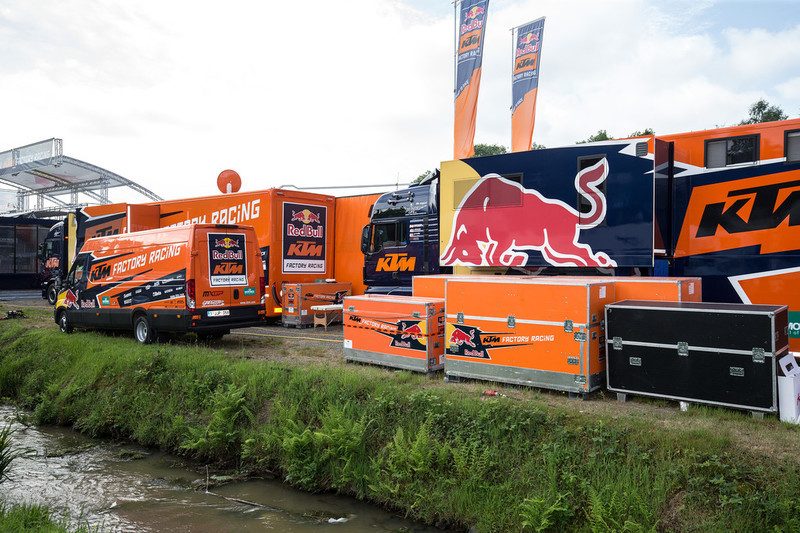 Gregor brings KTM into race paddocks. The rest of the team arrives and erects the framework that links both MXGP and MX2 work areas for five bikes in total and almost always positioned next to the Red Bull Energy Station. “From the moment I park until everything is ready I would say it takes two-three hours; it means laying the floor and constructing the awning with the roof and make the walls and everything clean,” he says. “After every race we make a thorough check and clean and the boys help a lot with keeping the truck well-stocked. It is the third year with this trailer and it has been working well with little maintenance.”

The crux of Robert’s work takes place before and after a Grand Prix. Ragni drives or flies from Austria to a venue and walks into a maelstrom of responsibilities. She is the instantly recognizable voice of reason, the organizer and the person whose temperament keeps everything ticking over. Her job is also ongoing between races and especially in pre-season. “I take care of the logistics for the people and I work in the background for the team,” she describes. “I start by booking hotels and rental cars for the team members and riders and then I’m also the link with the media and some sponsors and then matters like the team clothing and anything else for the technicians. At the races I’m supporting the riders to make sure they are presenting the team and KTM in the right way and are showing the sponsors well on the podium. Tania [Milani, her equivalent as part of De Carli’s faction] and I are the only women and she’s a bit more for MXGP while I’m looking a bit more for the whole structure.”

Being one of the few women in the KTM crew gives Ragni a slightly different take and position on dealing with the adrenaline and testosterone of arguably one of the toughest motorcycle sports. “I think I am also a bit of a psychologist, mother and sister for them as well! We talk quite a lot and I believe riders just open up more to someone who is not of the same gender … and I have no problem to talk!” 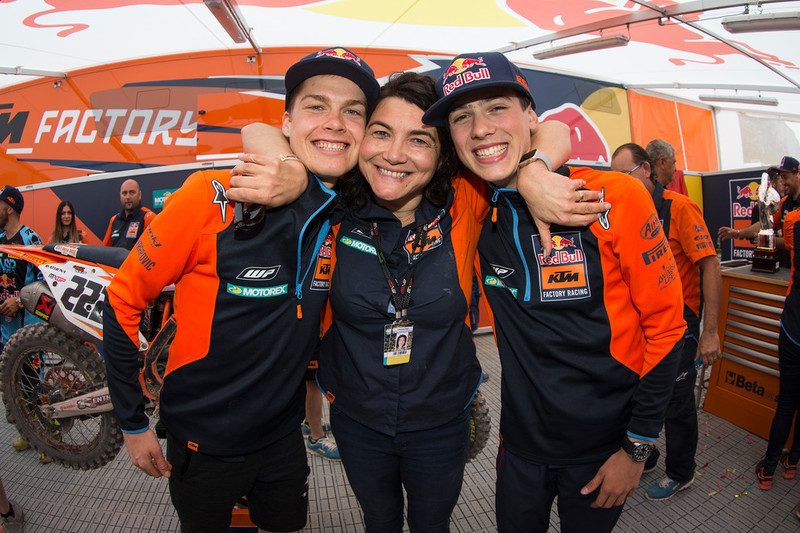 Ragni’s personable approach means she almost fills a maternal role for the team. This can be challenging when she has to chase riders on their responsibilities or – the hardest part – dealing with the worst element of motocross. “Dealing with rider’s injuries is a very tough part because sometimes I look at them like my kids! You see them working hard and then to throwaway one season because of an injury is hard. Some of the episodes that Jeffrey suffered almost breaks your heart and you do wonder ‘why is that happening?’. I’m terrified by injury because when I started in 2003 Pit Beirer had his huge accident and it changed my life a bit. It was my first year in KTM and I have to thank him because I found the strength to continue in the job; Pit was the strongest of us all in the circumstances.”

Both Gregor and Ragni are quite clear over the race that causes the most headaches in an MXGP year … and it’s largely thanks to a Mr. 222. “Italy is very special, usually quite a bit of chaos because there is a lot of people around the riders and trying to grab a picture,” says Gregor. “There is more pressure compared to say a race in the Czech Republic.”

“Grands Prix in Italy can drive you a bit crazy because we have Tony who is big star and he is doing some special things,” smiles Ragni. “The fact that I am Italian doesn’t help! People think they can easily go through you to get to Tony. You do your best to be kind, friendly and helpful but people don’t always see the full job.” 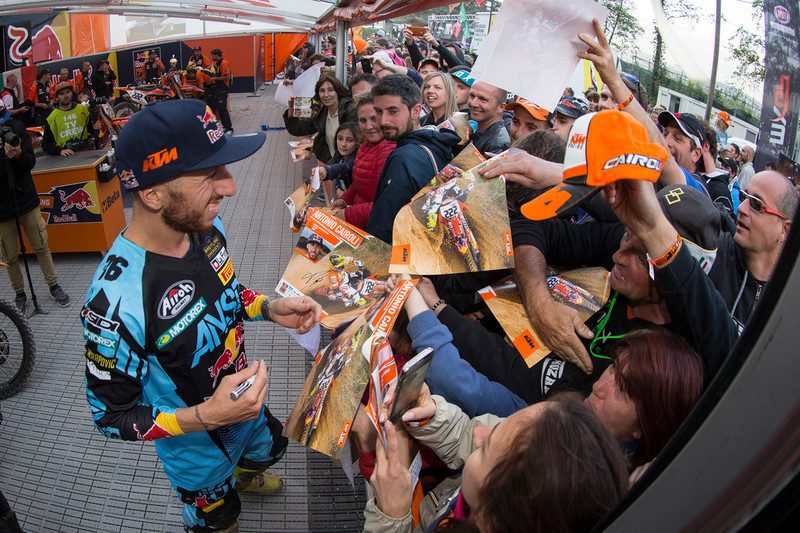 Aside from the mechanics and all the R&D support back in Mattighofen people like Ragni, De Carli and Gruebel are on the front line when it comes to the highs, lows and emotions involved with the riders and the heroes for many fans and kids that follow the sport. When asked what it is like living, working and dreaming with these athletes Ragni was an ideal person to quiz. “Jeffrey is one of the best riders for sure,” she says. “Tony always surprises me. He has won so much and he is still such a humble person with his feet on the ground. He is always kind to people and that’s not common among guys with his success. Pauls Jonass is our ‘iron man’ rider because he has such a high tolerance for pain. Glenn is very professional and Jorge is another wonder kid and is always smiling and happy … but still so young, like Pauls, and you hope you will see a lot from them.”

91 Responses to The ‘stars’ behind the stars: MXGP race team