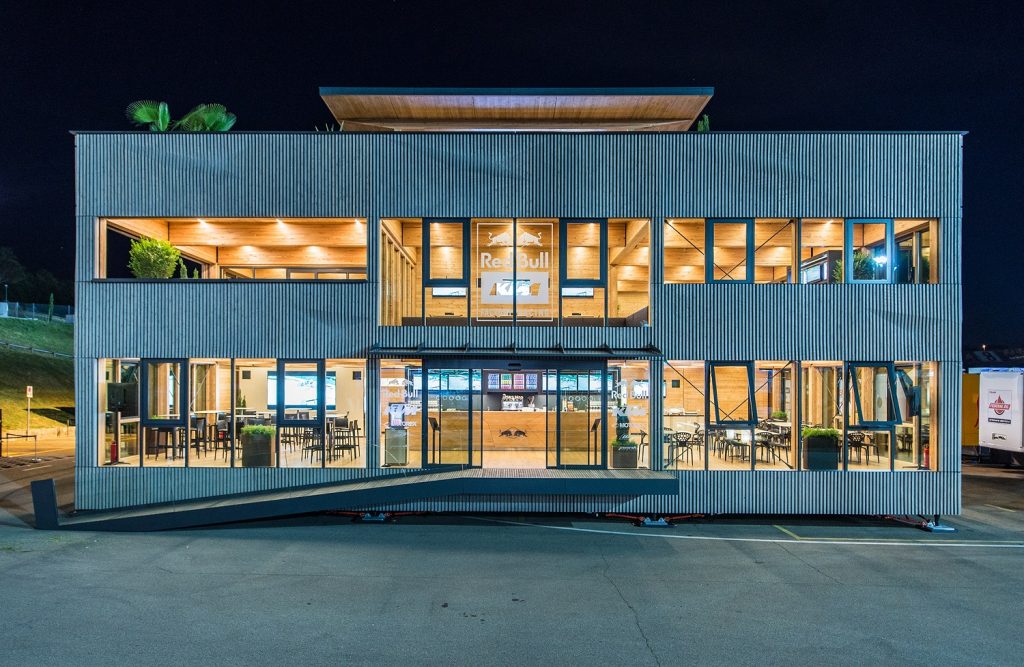 Red Bull emerged in MotoGPTM through Yamaha, several key athletes, an association with HRC, event sponsorship, Rookies Cups and finally emphatic presence in every Grand Prix class with Red Bull KTM. Today the Red Bull Energy Station ‘Holzhaus’ stands both as a subtle but monolithic presence in the MotoGPTM paddock and reflects the ambition and vision of both the company and KTM’s hunger for racing prestige. 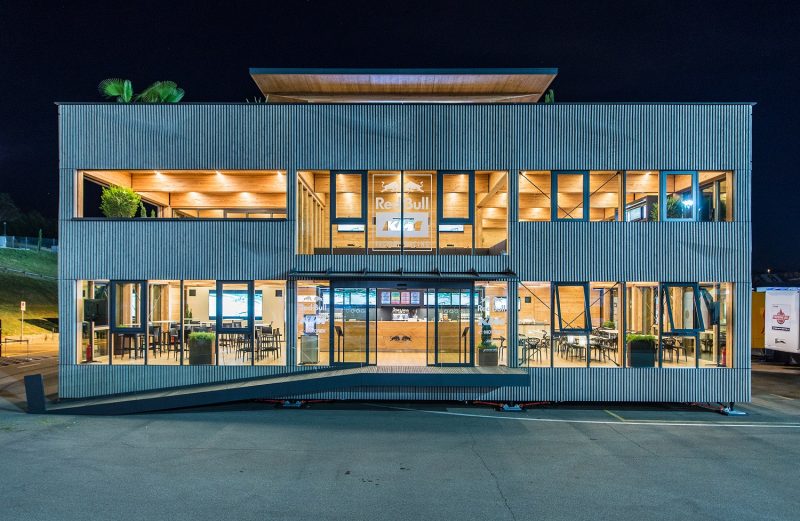 Walking into the Holzhaus is a little like entering the spacious and airy confines of a hotel. The wooded interior with strategically placed monitors, fridges and seating becomes more casual and less functional (but somehow also more exclusive) the further you rise through the three floors. A vast coffee bar greets the visitor once through the doors and past the showbike KTM.

The 16 trucks needed to ship the 788m2 Holzhaus first rolled into the paddock in 2017. The catering/entertainment/business facility quickly became a reference for how Red Bull had grown into the sport. “We’ve come a long way in MotoGPTM and I think the series has been rising year after year in terms of relevance and perception by the public and as a brand we want to be involved in the top motorsports categories,” commented a senior Red Bull spokesperson during our visit and tour. “It is a no-brainer to be involved here. We really like this environment and it is accessible for us and enjoyable to work in as a brand, and for this reason the size of our presence in this paddock has been significantly growing.” 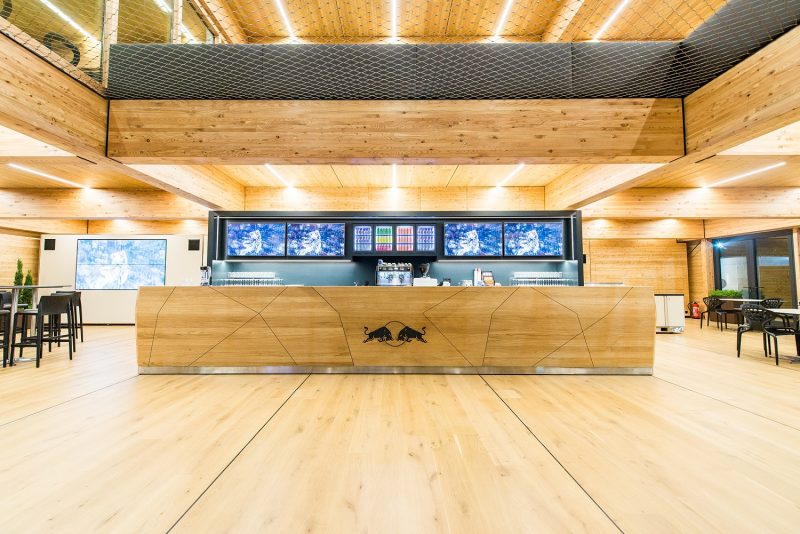 Red Bull’s early biking roots were stamped hard in 2007 with the creation of the Rookies Cup; a filtering competition to Grand Prix that has already produced star talent like Johann Zarco, to name one athlete among many. The contest was backed by KTM and the Austrian link spread to Moto3 (the first title was won in 2012) and then Moto2 before completing the circle in 2017 with the KTM RC16 baptizing KTM’s intent on the premier class.

The Holzhaus is the home for this ranging alliance. “For KTM and Red Bull in the paddock this is the central hub and from 2018 we are bringing all of our entities inside,” comments our guide. “It is a great way to give our friends and partners an experience of our engagement in MotoGPTM. This space speaks for us.”

More than twenty staff appear to be permanently busy while guests eat and drink only meters away from mechanics, TV pundits and Grand Prix riders. Red Bull opened a lot of eyes in 2017 when the hospitality unit that is almost at F1 level (“I think the Formula One station is even a bit bigger but F1 teams are a bit bigger than MotoGPTM teams. I think this is two-thirds of the size.”) and requires three days to build and two to dismantle what was first erected. But it has expanded in terms of scale since. “Mainly because of the Rookies Cup,” we are told. “We used to have a second facility for them but as a matter of efficiency we brought them in here. When you consider we are feeding between 4-500 people each mealtime in different stages then it gives you an idea for the size of the operation and also puts it into perspective because it is a big building but when you consider the amount of people then it serves a good purpose.” 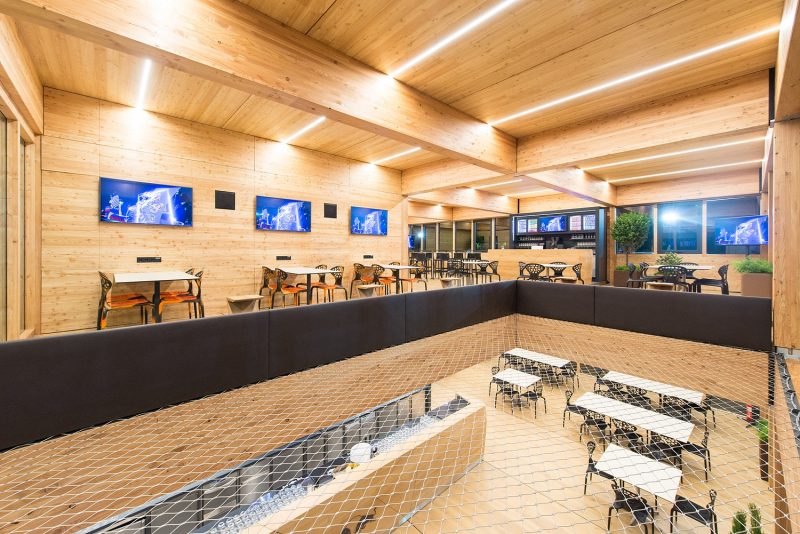 We’re served a coffee and shown the rooftop terrace that again gives the Holzhaus that spotless and desirable ‘hotel’ feeling. There is a hint of luxury, the feeling of canteen downstairs and the sense that this is a sizeable pocket away from the oil, noise and engineering of the race bikes. Our hosts are quick to stress the versatility of the location. “I think you can see from the style and the layout that it is a multi-functional place for us in the paddock. We’ve hosted presentations, a team launch and more events in conjunction with [MotoGPTM rights holders] Dorna. There are many ways we can use it and KTM run media debriefs and we have big screens and multimedia. Our staff is also used to quickly changing the configuration as well.” 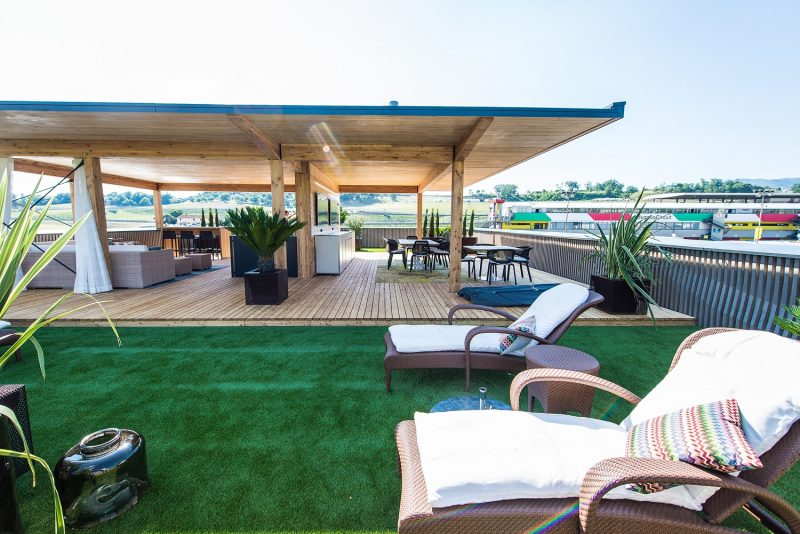 Rumors circulated in the paddock of the millions needed to create and run the Holzhaus. It was therefore irresistible (if predictably futile!) to ask about a ballpark figure to make it all happen. “It is an investment!” is as close as we get. “Purely through the sheer size of it but also the quality we are trying to bring. What is important is that our product – the Red Bull energy drink – is something we use a lot on the premises and is part of the gastronomy occasions; and this is a gastronomy outlet and a pretty nice looking one! We try to make our products fit here; we are a premium product so we try to make the surroundings fit as well in a similar style and manner, that’s why we pay a lot of attention to the details and the setup.”

Hiking the Holzhaus to at least ten of the nineteen MotoGPTM events in 2018 is no easy (or cheap) task. Is there a risk that it might not pay off in the short term? We’re met with a serious look. “Of course, if you build a facility like this then it is not just for one year so the plan is to use it for many years,” we’re informed. “For us it has been made as the home for Red Bull KTM but also for Red Bull and our guests. We are planning for the long-term and also developing it year-after-year. We are trying to maximize the facility and the space we get in the paddock from IRTA.” Wow, it might get even larger then. It already has a detachable terrace in some of the larger circuit areas.

Importantly for bike racing the unit is a symbol for how a major lifestyle company wants to continue to support and back the sport. The Holzhaus might not appear in other motorcycle paddocks but it’s a statement for how Red Bull view two-wheeled competition across the board and for their synergy with KTM. “MotoGPTM has been expanding quite a lot in terms of viewership over the last few years. Motocross and Supercross in the States as well are both healthy sports. We are present in all the key motorcycling categories like MXGP with Red Bull KTM, Rally and Supercross. We try to find the strategy to be competitive in those series, especially because our competitors are very involved, particularly with the offroad side and they are very active with series sponsorships. So, we try to find our positions there and the relationship with KTM helps a lot and we have been winning many championships over the years.”

As we descend the stairs and given a friendly farewell it’s not difficult to understand just how and why Red Bull KTM are rapidly progressing to the front of the Grand Prix grids.