Stop! How braking differs from MXGP to MotoGP™

MXGP and MotoGPTM are two racing disciplines that are like chalk and cheese in many ways and the aspect of braking is one of the great separators. We gained some insight from the Red Bull KTM factions of both paddocks to understand further …

OK, simply through the respective nature of road racing and motocross it is easy to see why the subject of brakes and slowing the bike is so diverse. In a series like MotoGPTM the front wheel-eclipsing systems are indispensable to haul the KTM RC16 on the track and from speeds touching 360 km/h as well as for overtaking. In MXGP the same principal applies but many other factors come into play, such as the type of terrain, engine braking and gyroscopic effects in the air. A motocross rider will hardly use the front brake in the sand and overtaking can come through other judgement such as line choice, traction and air-time. 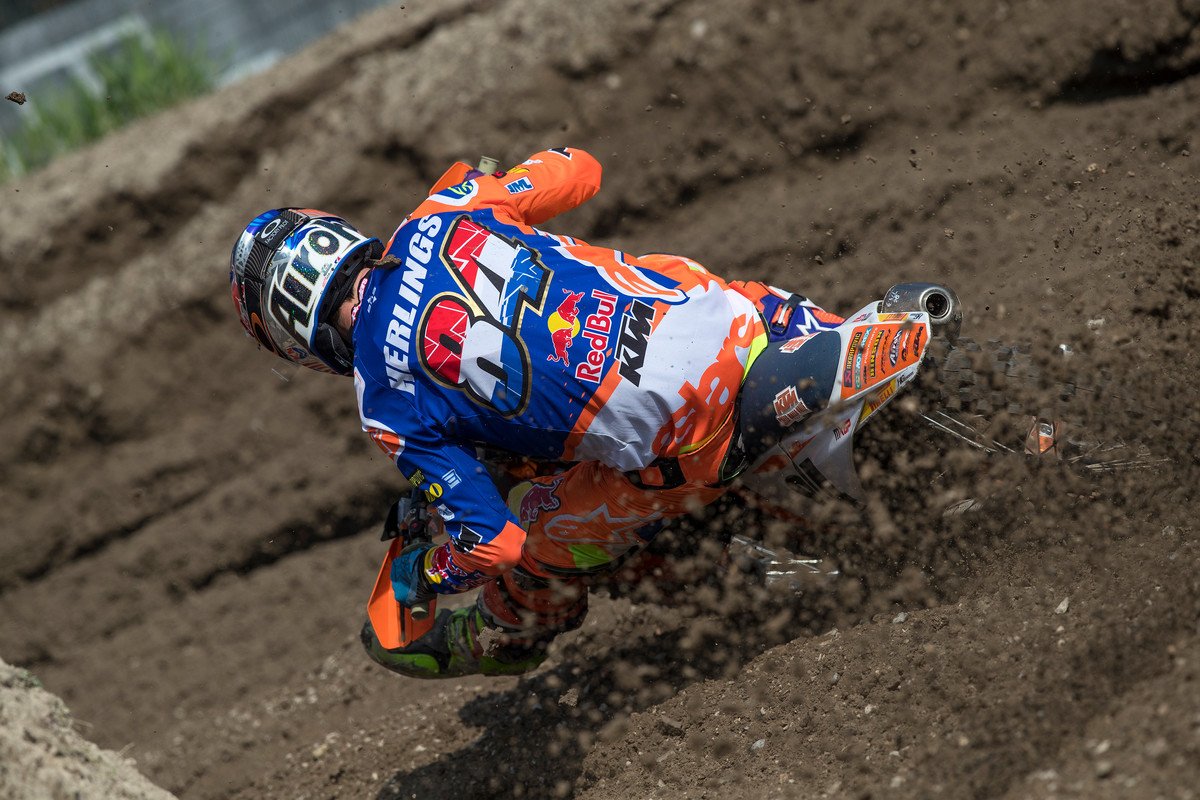 Braking is an undeniable part of racing, even an art form that a professional will have perfected over years of practice. But it is curious how its importance can vary.

“It is essential,” says John Eyre, a veteran of almost twenty years in MotoGPTM and now part of Bradley Smith’s technical crew. “We are running mostly carbon brakes in MotoGPTM in both the wet and the dry. We’ll have a 340 mass disc on high-braking circuits like Sepang [Malaysia] and Motegi [Japan] and there is a 320 standard mass option, which we use in the wet with covers. Every motorcycle has to stop and that explains and justifies the cost.”

That figure can reach staggering levels at the pinnacle of road racing. “When I worked for other manufacturers the budget was a million euros just for brakes,” Eyre says. “We used to have a pallet full of Brembo boxes. When you crash in MotoGPTM then generally you are knocking out a set of pads and discs; a ‘pebble-dashing’ means they are gone. You’re looking at 12,000 euros for discs and another 4-5 for pads. You try and keep your best set for the race and we’ll have one set and transfer that from bike to bike.” 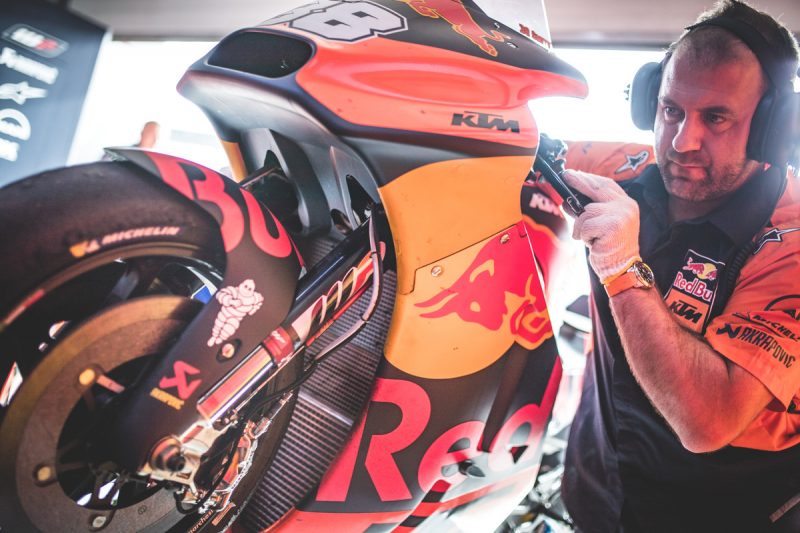 Why so pricey? The resistance and reliability of the Brembo material KTM uses not only has to perform for sporting reasons but also for absolute safety. “It’s the force,” he says, speaking of the hard G-force demands that strain both the rider and the machinery. “Temperature-wise I know that in Motegi we were running at almost 1000 degrees, which is the limit and why you really need the 340s. Every rider is different with their braking, different forces, so it means a different pad-compound.”

MotoGPTM will prolong their brake components simply due to the cost factor, MXGP – with the factory team using Dutch specialists Moto-Master – involves a much higher turnover … even if the ‘braking = overtaking’ equation is not as pronounced as road racing. “Speaking specifically about Jeffrey Herlings then he is hard on the rear brake with the bigger bike and generates a lot of heat,” reveals Team Manager Dirk Gruebel of the former MX2 three times world champion and now MXGP star. “They start to squeak and the brake pads get too hot and glaze up so you don’t have the desired performance. We’ll use a disc per weekend and sometimes two if you have a track like Villars-sous-Écot [France] with a lot of downhills.” 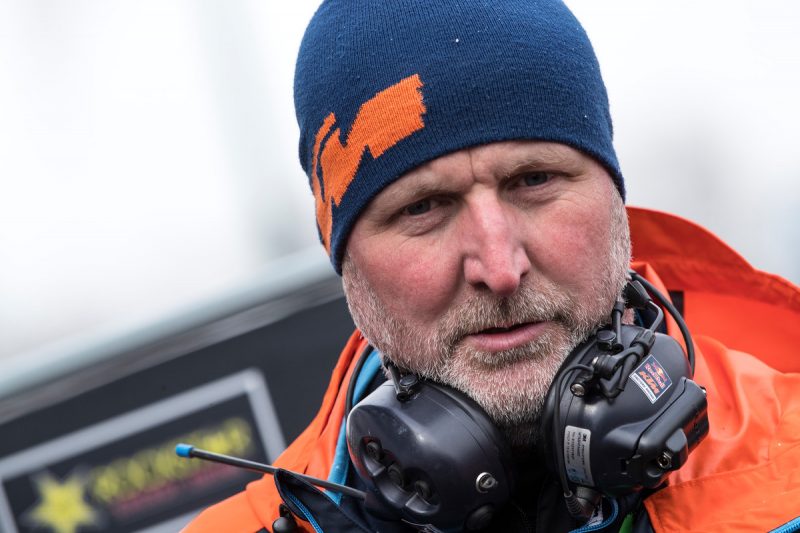 “The brakes are pretty sturdy; it’s all metal!” the German adds. “In MotoGPTM you’ll have carbon discs, which are quite sensitive to any impact. Here in motocross the brakes are constantly being sprayed with sand or stones or a mud race can be pretty bad for them … but they’ll generally last a weekend.”

“It is not a super-expensive component of the bike and calipers last a long time,” Gruebel continues. “We run them quite a lot: three-four races without a problem and then for the rest of their lives they’ll be on the practice bike.”

Of course the use and intensity of braking comes down to personal taste and the way the lever/peg is squeezed and pushed. “You also have the 4-stroke factor,” Gruebel says. “You needed more braking emphasis with the 2-strokes because when you shut-off the gas the bike kept going. Now there is engine-braking which the guys can also adjust – some prefer more and some prefer less – and that affects the setup for brakes. I wouldn’t say that we have super-oversized brakes on our bikes: they are the same dimensions that we were using ten-fifteen years. There might be some variation but we’re talking 260-270. Nothing like they use in road racing.”

“Different sizes but also different riders as well,” says Briton Eyre. “I worked with Dani Pedrosa for eleven years and he was very finicky with brakes. He’d sometimes use a lower mass because he wasn’t too aggressive whereas others would run it higher because they were really hammering the brakes. So it depends on the rider. In Bradley’s case he seems to like the 340s, which would suit an aggressive braker, but he isn’t really like that. I think he uses it to his benefit in some places where he is just rolling on the brake to help the bike turn; that’s the difference. Brad fluctuates between front and rear. He used the rear a lot more last year and I guess that is just because of setup. We can tell this from the pads: he is not as aggressive as he was last year. On the front he is very similar.” 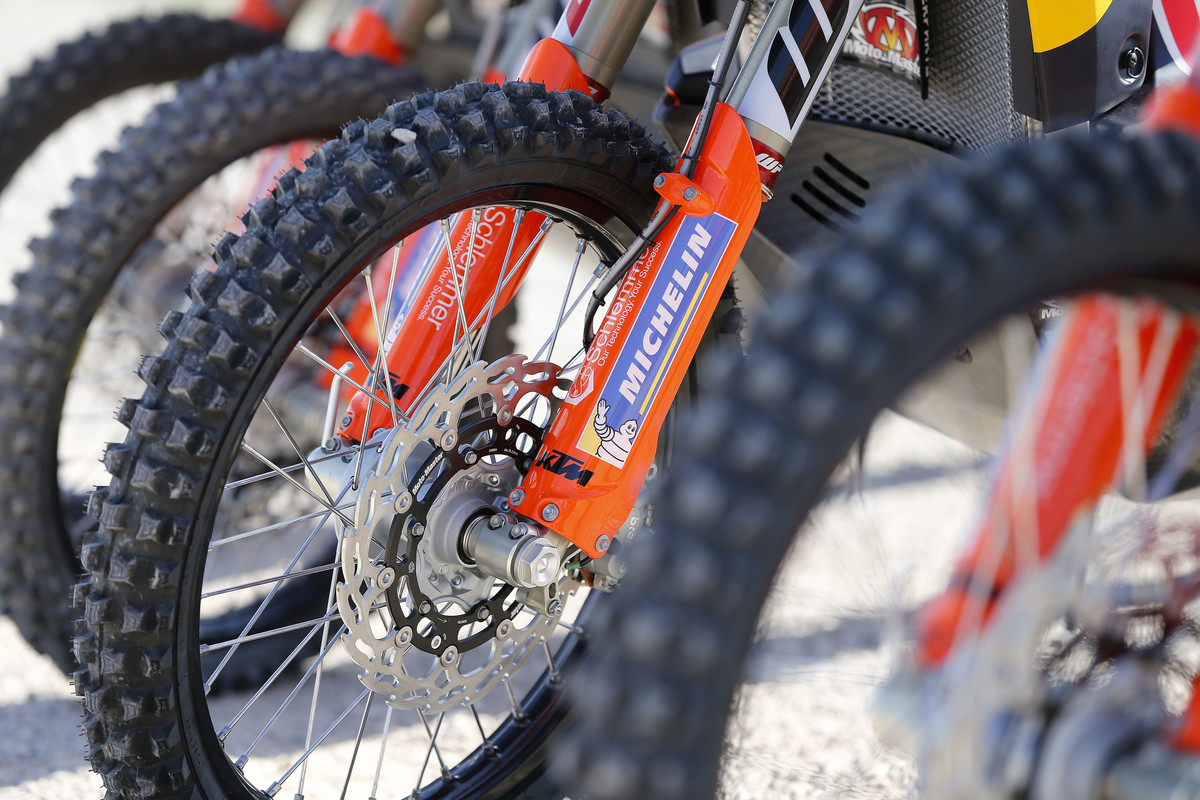 A race bike can be like a puzzle. The technicality of MotoGPTM means the KTM RC16 is perhaps more of a ‘500 piece’ challenge compared to the ‘200’ of motocross. The range of parts and solutions to test can be dizzying, particularly in MotoGPTM. According to the engineers, braking is a very valuable area of the pre-season prep process. “Just to get a feeling for the rider, and if it helps him turn better, that they keep the same temperature; any little improvement we can find really,” says Eyre. “We might get development ideas and parts during the season and we’d test them for sure … but probably not use them in race conditions because you know what you have got already.”

“We test the geometry of the levers, pump diameters and compounds of the brakes and how they harmonize with the discs but I would say we haven’t made a big step in this area for two-three years,” Gruebel says of the MXGP work.

MXGP can benefit from ideas and evolutions like Moto-Master’s Flame discs (and ‘Wave’ discs generally) and the work in MotoGPTM can eventually feed directly onto the road and the future could bring some surprises according to Eyre. “As with anything technology does not slow and there could be something quite different in three-four years time,” the Brit opines. “It is hard to say where it will go because things change all the time, like the sizes of discs and compounds. It is non-stop and development will continue. Something new will pop up and everyone will start using it … like carbon discs in the wet. It became like a ‘new fashion’ and clearly it must work.”

218 Responses to Stop! How braking differs from MXGP to MotoGP™